Flinthook is one unforgivable bastard of a video game! Taking a cue from the likes of The Binding of Isaac and Enter the Gungeon, Tribute Games' latest side-scrolling adventure game is far rougher than the mightiest seas abound. It's brutal, demanding of perfection, and will make you walk the plank into the depths of its oceanic space. With that being said, Flinthook is also quite the magnificent romp!

Taking the role of a masked vigilante, Flinthook has you seeking out the bounties of the meanest space pirates around. In order to reach these infamous foes, you must ransack various ships and collect gems to earn yourself an audience with them. With your grappling Quickhook, time-slowing Chronobuckle, and Blaster Pistol the hero of the story will do whatever it takes to get that sweet bounty in his pocket. However it's all easier said than done... 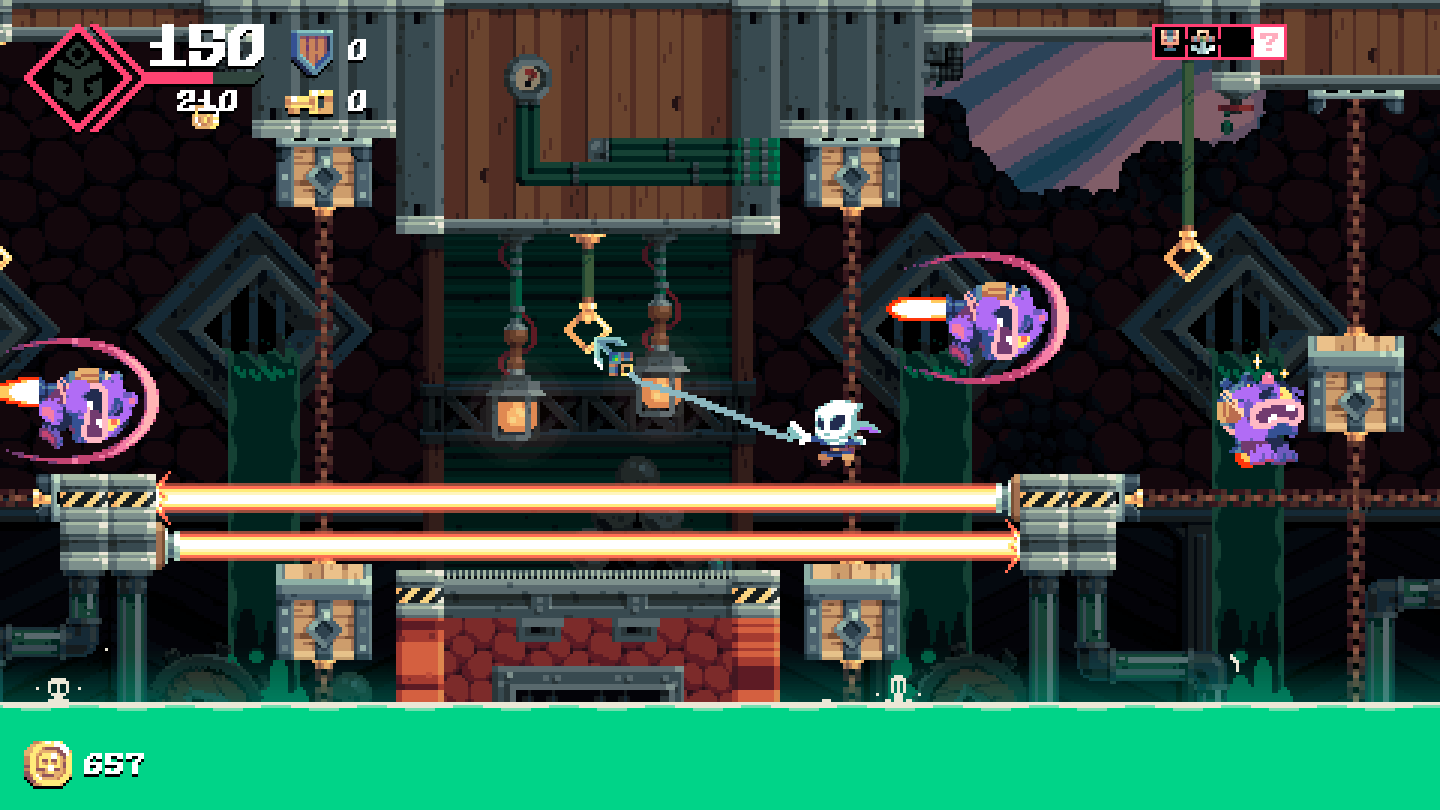 Flinthook sets itself up with randomly-generated ships, meaning that no two experiences on-board will ever be the same. There's no way to truly strategize yourself when diving into a level, with its difficulty often not known until you hook yourself through the door. Sometimes it's be a walk the park, with only a few enemies causing a nuisance in your surroundings; other times it'll be walking right in the middle of Hell, forcing you to use your skills to survive via the skin of your teeth. And believe me: you'll be screaming bloody murder when you bear witness to the chaos at hand.

This game knows how to punish players when death knocks on your door. While you keep your skill points and the like, you lose your gold, sub-weapons, and even the gems needed to meet up with the bounty. That means you can expect to spend hours trying to clear one single hit, which will leave some of the more impatient gamers out there a couple degrees away from smashing a chair through their TV. (It took me almost eight hours just to clear the Billy Bullseye bounty, it was that difficult!) 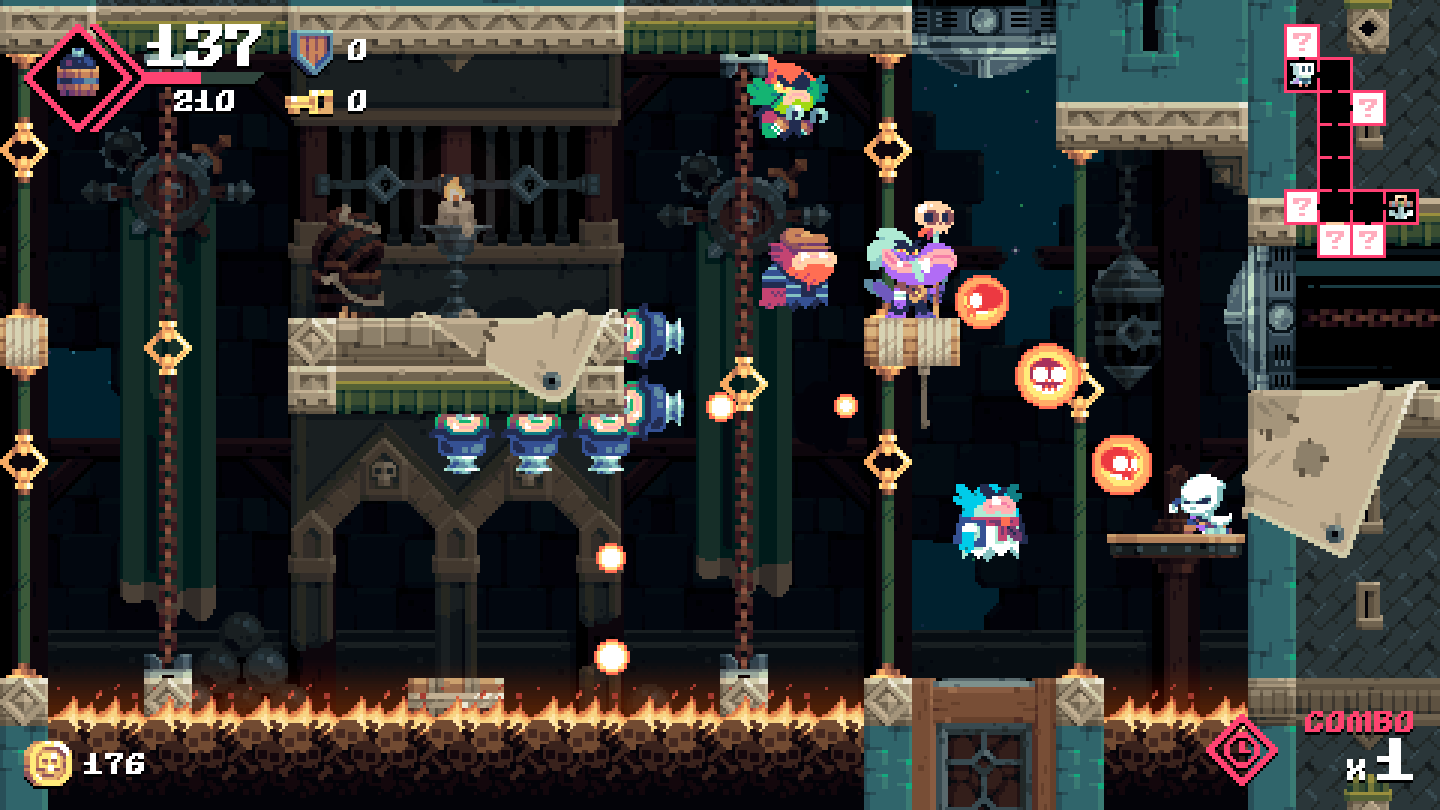 Thankfully there are certain Perks you can earn and use throughout the game to make your journey just slightly easier, be it more HP and XP or faster boots and more powerful blaster range. Although you can't use them all at once, you can mix and match to find that combination for a victorious mission. However there are also curses that can be found that'll both take something away while giving you a boost of another. (For example, "the curse of the lessor vigor!" will have you gaining XP, but will slice off some of your HP.) It's a bit of a give-and-take situation, so they must be used wisely.

Control-wise Flinthook is quite the masterful hands-on experience. Aiming your weapon and Quickhook is fairly easy once you can get a handle of each room, with the title character looking like he's swashbuckling about while in air. The Chronobuckle takes some getting used to, as it's more about timing its usage right instead of pressing it all willy-nilly whenever your heart's desire. Usage of the secondary weapon such as bombs is simple to use, but -- again -- it's more about getting the timing right to use it rather than simply smashing the button. 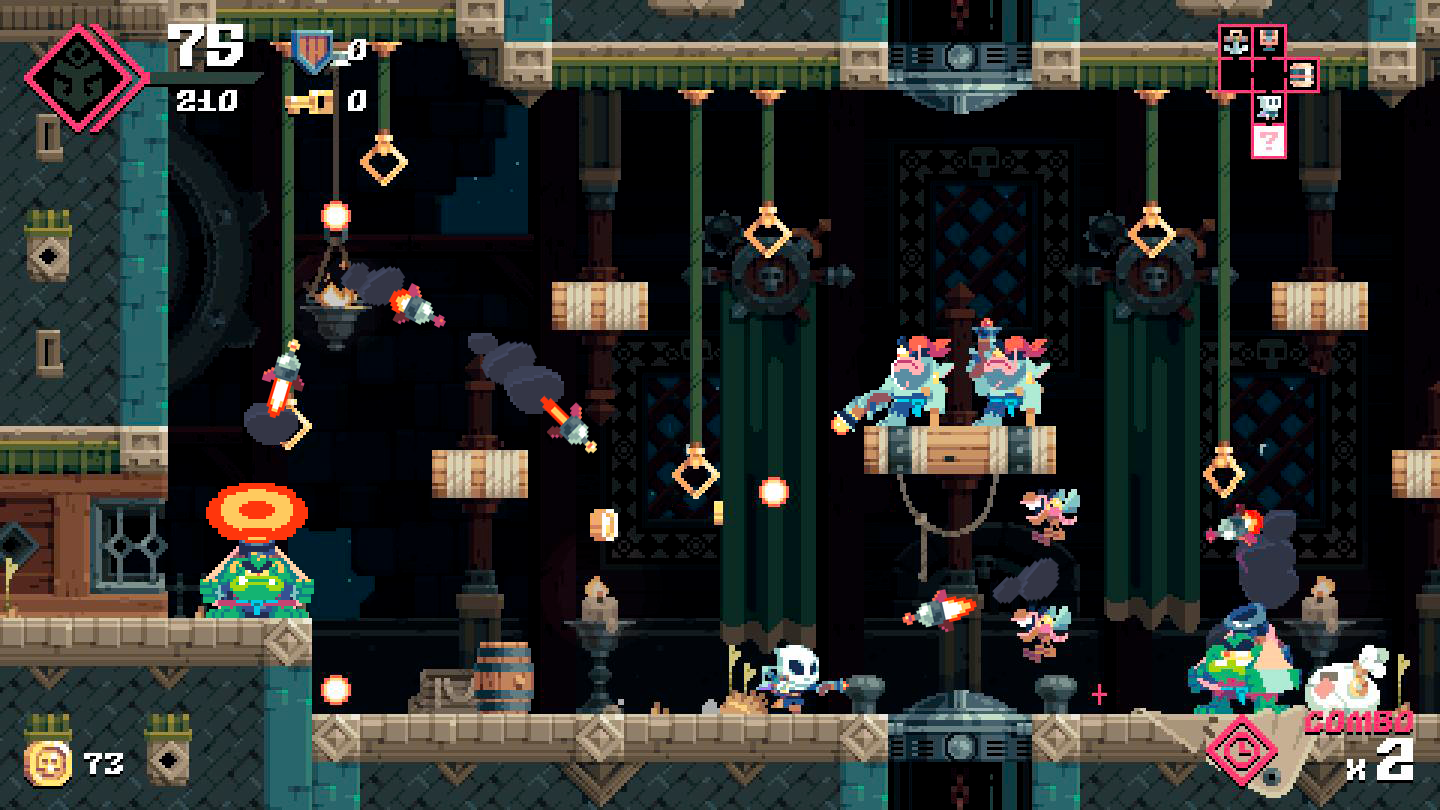 Taking the retro look it mastered in both Mercenary Kings and Scott Pilgrim vs. the World: The Game, Tribute Games' visual aesthetic in Flinthook is an old-school beaut. Reminiscent of early 90s arcade titles the ships and characters are filled with pixelated detail and personality. Also on-par is Patrice Bourgeault's soundtrack, which meshes together some skanky chiptune sea shanties and boss battle anthems. (Click here to grab it from Bourgeault's Bandcamp page!)

Flinthook is one of those games that'll take you many restless nights to defeat. While you could attempt to speedrun or marathon through it, I fear that it may cause gamers to suffer a stroke, a heart attack, or even an aneurysm after being greeted with the Game Over screen over and over again. That's why I need to give this advice to those wishing to dive into Flinthook: take your time with it. It's more rewarding when you experience a victory if you baby-step it rather than try to beat it all in one go.

Flinthook is one tough cookie of a video game, but it's still a very fun experience. Thanks to its visual style and swashbuckling attitude Tribute Games' latest adventure is certainly one that'll have you spouting sailor talk for both the right and wrong reasons. In laymen's terms: Flinthook gets the challenges down hook, line, and sinker!

Promotional consideration provided by Tribute Games. Reviewed on the Xbox One.

Background Noise: The Devil, The Heart & The Fight by Skinny Lister - the England-based folk band has always brought a sea shanty vibe to their sound, which is why I found it appropriate to pair it up with my work on this review of Flinthook. Their third album keeps their drinking party spirit high amongst the tallest piers, with a break or two to show off a sign of maturity. "Wanted," "Tragedy In A Minor," and "Hamburg Drunk" are certainly the songs to blare during a pirate-y barroom brawl, or -- in the case of Flinthook -- while in the midst of plundering some space booty!