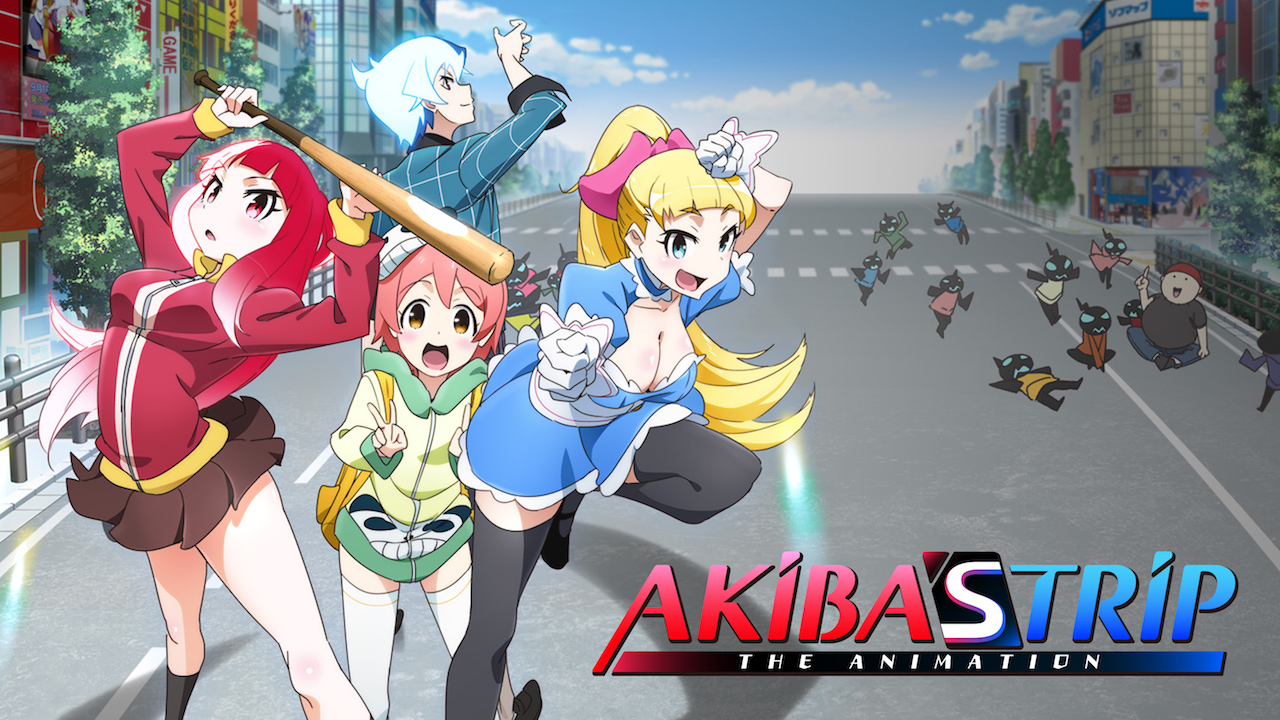 When it comes to TV and films based on video games, the bad always outweighs the good. Although we've been gifted with some great adaptations such as the Pokémon & Yo-Kai Watch anime series, the Mortal Kombat web show, and Archie Comics' Sonic the Hedgehog serial, we're also dealt hundreds of terrible Resident Evil, Bloodrayne, and Double Dragon reimaginings that have almost nothing to do with the original source. Sometimes the opposite happens, where an adaptation is way too much like the original, making it a boring spectacle for the game's fans. (Last year's Ace Attorney anime was basically a visual walkthrough guide to beat the games, it was that predictable.)

However there is a way to do it right, where you can be true to the source material but be different enough for fans of the original game to be surprised in the long run. This season the anime industry has given us one such adaptation that plays to both the core fanbase and newcomers who have never tried playing the game before. That series, oddly enough, just so happens to be Akiba's Trip: The Animation, the least-likely candidate to have a good adaptation. 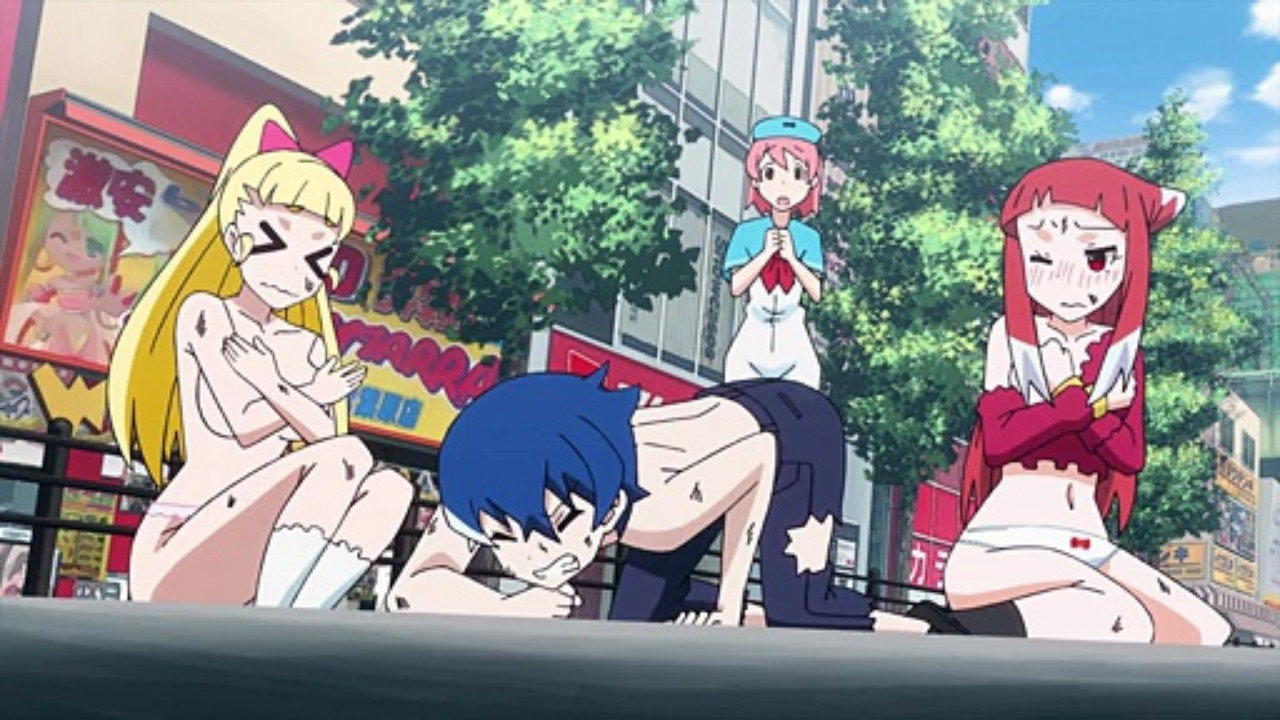 Let me explain: the original video game of Akiba's Trip has players defeating vampires via ripping their clothes off and exposing them to light. I'll admit that the game is wicked fun, in the same vein as the Senran Kagura series where it never takes itself seriously and just full-blown crazy with the fan-service. But to adapt that into an anime just sounds like another cash-cow for those wanting to grab as much dough from those who get their jollies off of animated panties and...other sorts of things that a mere mention of will drag me down a dark, scary hole. How surprising, then, of Gonzo to not only present Akiba's Trip in animated form faithfully, but also fill it with a good dose of brain power and originality.

Outside of the actual gameplay premise, much of Akiba's Trip is vastly different from its original games. Even its characters are different, with the main focus of the show being on an otaku named Tomatsu (Haruki Ishiya). During a usual shopping trip in Akihabara with his sister Niwaka (Marika Kōno), he comes across some strange individuals that are wreaking havoc on their surroundings. 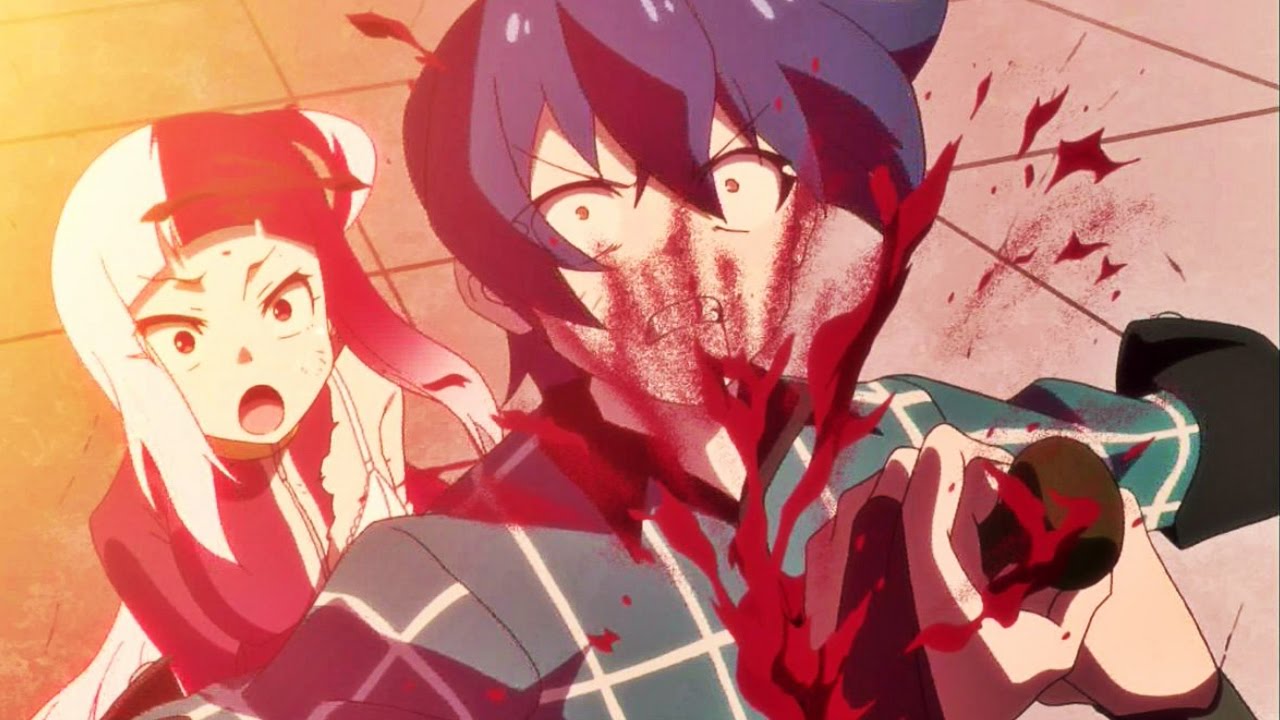 Enter Matome (Rie Takahashi), a so-called Bugged One who aids in the battle against much badder Bugged Ones. After saving her and risking his life, Tomatsu is also cursed with Matome's condition. If the two of them are stripped of their clothes, they will die. With the aid of Finnish superhuman girl named Arisa (Yuki Nagaku) and their short Hindu professor friend Tasujin (Misaki Kuno), Tomatsu, Matome, & Niwaka fight to keep Akihabara afloat from the threats of the Bugged Ones.

Akiba's Trip takes a monster-of-the-week sort of route with its storytelling, with the plotline of each episode tying itself around the reveal of said monster. Episodes involving Niwaka, Matome, and Arisa being scouted as an idol troupe or Tomatsu getting job working at a maid & butler café all build up towards the reveal of the main Bugged One. It can be a little predictable at times, but fortunately the writing that precedes the big weekly battle is actually pretty good. In fact, not only is it funny, but it's often relatable. (The idol episode had a bit involving Tomatsu talking about finding that perfect sound quality for music, which is something I actually find myself doing as a Podcast host & editor.) 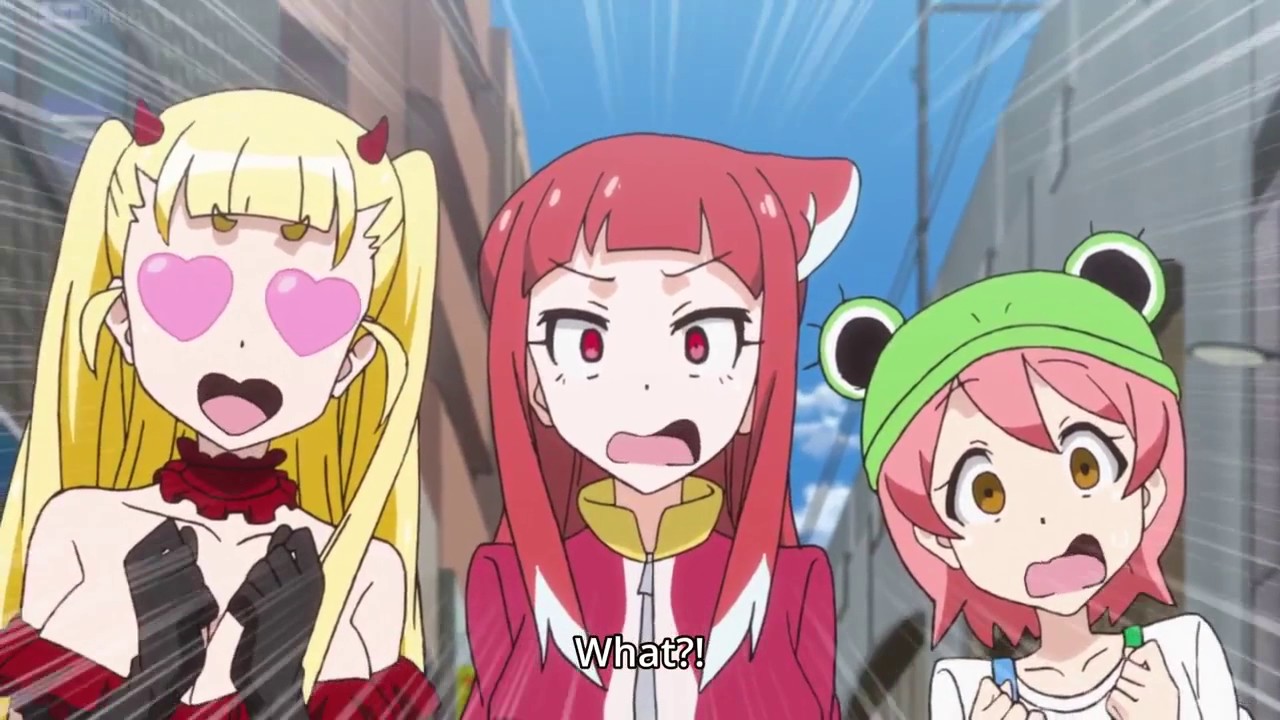 What I appreciate most about this adaptation is how much of Akihabara they've captured. Looking at pictures and reminiscing about my time there a decade ago, I can honestly say that Gonzo took a lot of time and energy to present the famed Electric Town. (Yes, there's a Carl's Jr. there, which is something Boston doesn't even have yet!) It's even not afraid to show its more infamous sides, as evident by a scene located at pool made popular for AV shoots.

Akiba's Trip is also not ashamed of some hardcore shameless plugging, as evident of Episode 5's nonstop in-your-face informercial for Street Fighter V. Fortunately, this big commercial trapped in an anime is quickly forgiven thanks to some very humorous jabs at competitive gaming. Hell, the "training" montage alone will have you cracking up in this episode! Its Bugged One baddie reveal in this one is also pretty hilarious, with Tomatsu dealing with him via a single blow. (Nevertheless it still didn't change my mind about Street Fighter V. The King of Fighters XIV was far superior.) 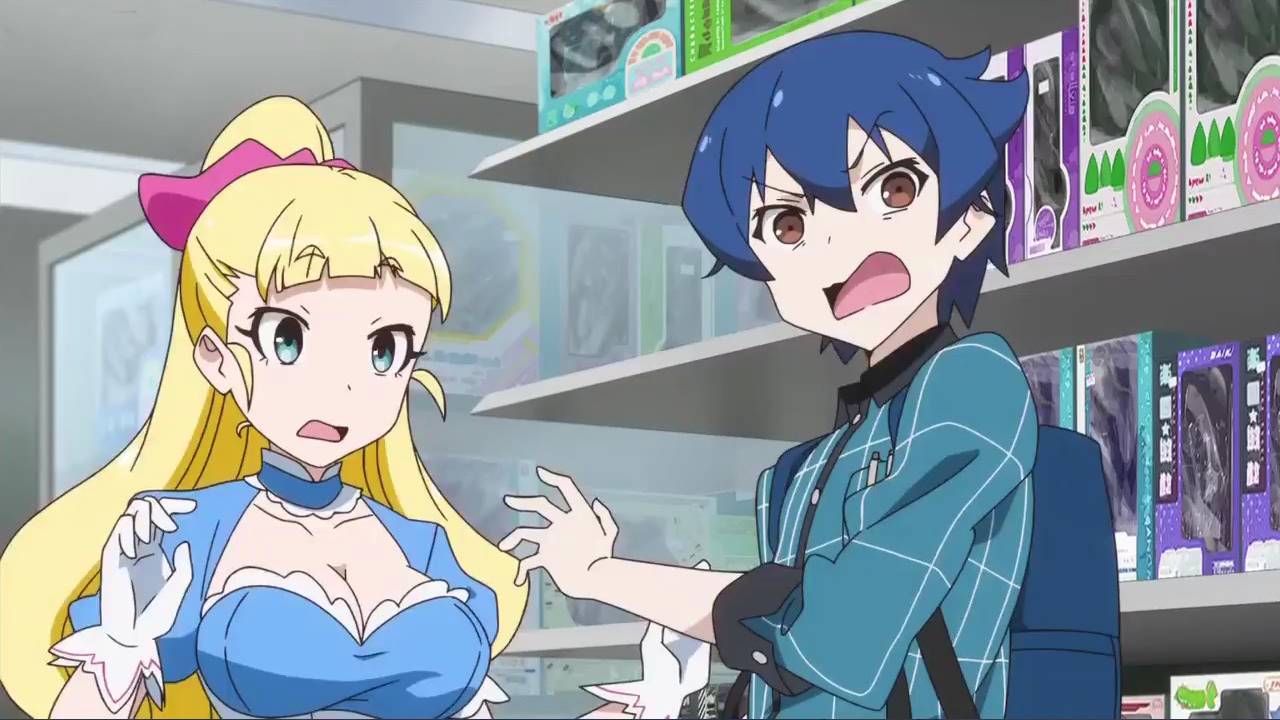 With it being a show involving ripping the clothes off of bad guys, there's surprisingly not a lot of fan-service. Once in awhile we're given a panty shot or two, but even in battle the main characters somehow find a way to quickly cover themselves up. Perhaps it's part of the joke, but it seems they save all the more racier shots for the more unsavory characters. (It's kind of [adult swim]-like going this route, in my opinion.)

Animation-wise, Gonzo seems to have taken a cue from Studio Deen's adaptation of KonoSuba when it comes to character designs. There's a sort of deformed look to everyone when they're over-exaggerating their emotions, but it's done so in way where one reaction looks different from the previous one. Oddly enough, it adds a level of uniqueness to the characters that help them stand out from the rest of the anime that's airing on TV right now. As for its action sequences, they're pretty well-drawn, but it could use maybe a bit more detail in its presentation. 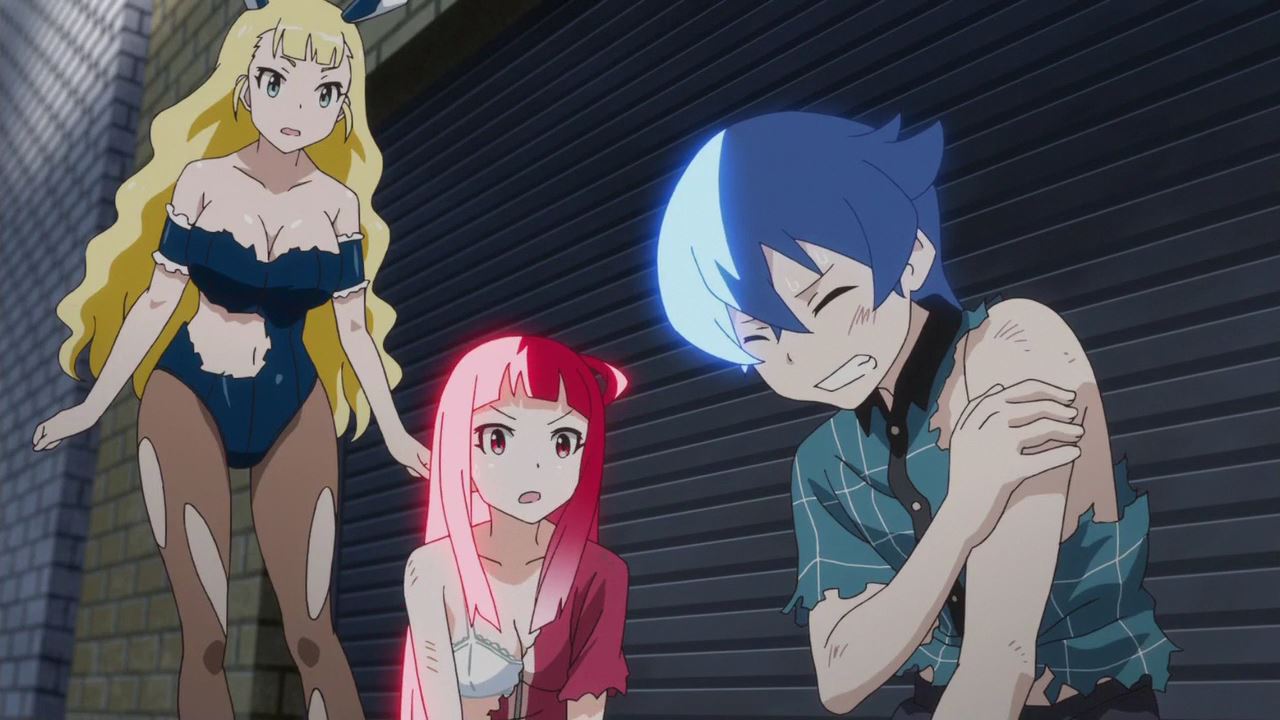 You can tell how much fun the voice actors are having when recording their lines for Akiba's Trip. Ishiya brings a lot of passion to Tomatsu, as he builds up everything from anime to technology as if they're all worthy of being on a pedestal. Takahashi plays the straight woman to the rest of the crazy cast as Matome, presenting her vocally in a way that keeps her focused and ready for battle. Nagaku goes full bonkers as foreign girl Arisa, filled with some humorous broken English and silly exclamations. Getting the dotting part down, Kōno is constantly adorable as Niwaka.

Endō's score for the series is a fine range of techno, rock, and even the occasional bluesy guitar plucking that gives this anime a surprisingly cool vibe to it. Opening theme "Ikken Rakuchaku Go Yōjin" by Earphones (which, incidentally, is made up of cast members Takahashi, Nagaku, & Kōno) is wonderfully catchy, blending cute vocals with electronica-infused traditional Japanese melodies. Taking a cue from last year's ReLIFE, each episode ends with a different theme song, contributed from the likes of Shoko Nakagawa, i☆Ris, AŌP, every♥ing, and mimimemeMIMI, all of which have thus far been pretty good.

It's strange to say, but more studios looking to adapt video games into other forms of media need to take a cue from Akiba's Trip: The Animation. With enough of the core elements of the original game mixed with new characters and plotlines, the series leads itself to being both fun and unpredictable with where it takes its viewers. For an anime that's about defeating villains via ripping their clothes off, its end result is a nice nod to both otaku culture and to Akihabara. Simply put, Akiba's Trip: The Animation will please both fans of the original game and those new to this bright, crazy, and somewhat perverted universe.

Akiba's Trip: The Animation can be viewed on Crunchyroll and Funimation, and has been licensed by Funimation. Episodes 1-7 were observed for this review. Promotional consideration provided by Crunchyroll.