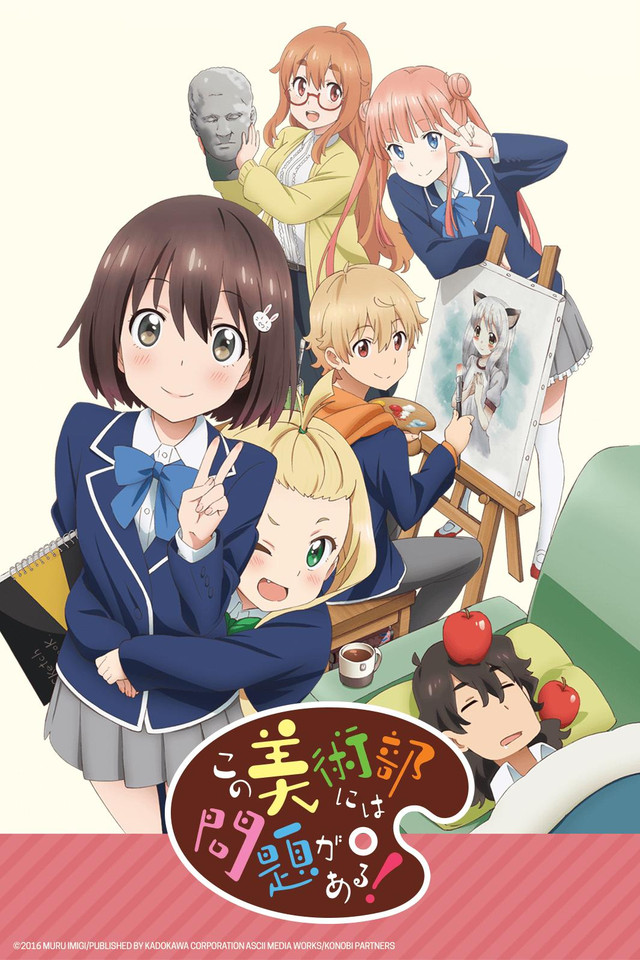 A work of art is one that's worthy of praise and fanfare, the kind that places it in the finest of art galleries or museums. The same can be said about movies, TV, and anime, with some of the greats stored away for safe keeping. Oh, how This Art Club Has a Problem could've reached such potential, had it not floundered on its character development and pacing.

It's hard to describe the premise of This Art Club Has a Problem, mainly because there really isn't one. The anime focuses primarily on Mizuki Usami (Ari Ozawa) and Subaru Uchimaki (Yūsuke Kobayashi), two Art Club members at their high school. Usami enjoys painting still life, focusing on the attention to even the smallest of details. Meanwhile, Uchimaki uses his talents to paint waifus, which sometimes angers Usami, seeing as she has a crush on him and doesn't seem to pay attention to her feelings. 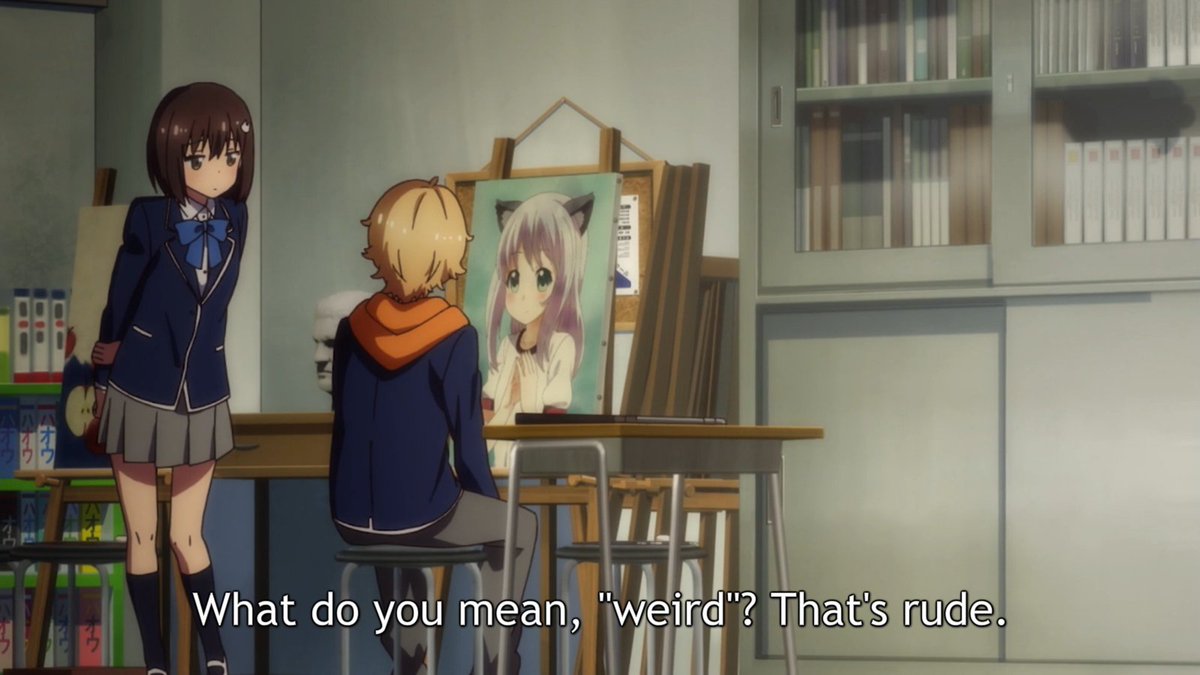 There's nothing much else to these characters, other than their strange quirks. Often, they find themselves sharing their surroundings with their unnamed Art Club President (Kentarō Tone), the curious foreign exchange student Colette (Sumire Uesaka), and club supervisor Tachibana-sensei (Nana Mizuki). A transfer student named Maria (Nao Tōyama) comes in and starts out as Usami's romantic rival, what with her sharing the same otaku interests as Uchimaki, but that plot point gets thrown out by episode's end.

It's strange, but most shows about nothing usually make up for the lack of plot for some fantastic character development and humorous banter. This is what makes the Kogayashi sisters in Non Non Biyori or Kyōko & Yui in YuruYuri very entertaining, as their characteristics and dynamics help to shoulder their plotless series with the greatest of ease. Unfortunately, there really isn't anything like that in This Art Club Has a Problem. 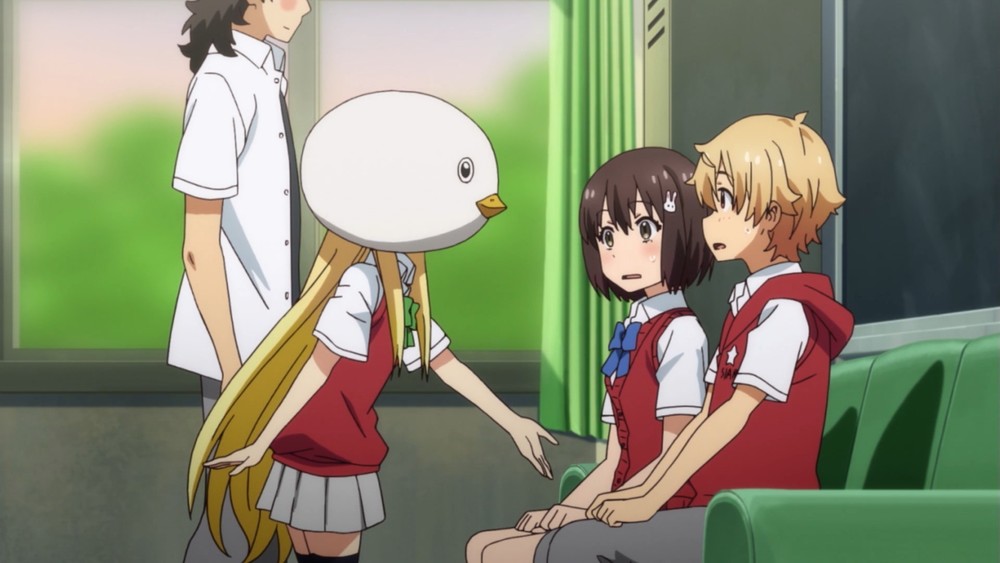 Usami likes Uchimaki because...he's probably good-looking and she's shallow, whereas he doesn't see Usami that way and only pays attention to 2D girls. The President likes sleeping around, Colette is goofy, Maria enjoys referencing obscure anime, and Tachibana is a nervous wreck. Thus far, none of the characters evolve from their previous selves, making it hard to really stick around with these students and advisors. It's not that they're unlikable, but rather it's because the main cast doesn't seem to learn from its errors, mistakes, and challenges that make this series questionable to return to.

So what does This Art Club Has a Problem offer that can help with returning viewership? Well, there are little things here and there that make it entertaining. Seeing Uchimaki's waifu paintings winning top awards at art events is a humorous jab at the state of Japan's artistic integrity. There's also the engagement between him and Usami when she's being used as a model for his drawing, especially when it deals with her always accidentally lifting her skirt too high, resulting in Uchimaki gets quite an eyeful. Then there's Usami's mother, who enjoys peering into her daughter's love interests like a silly sneak. 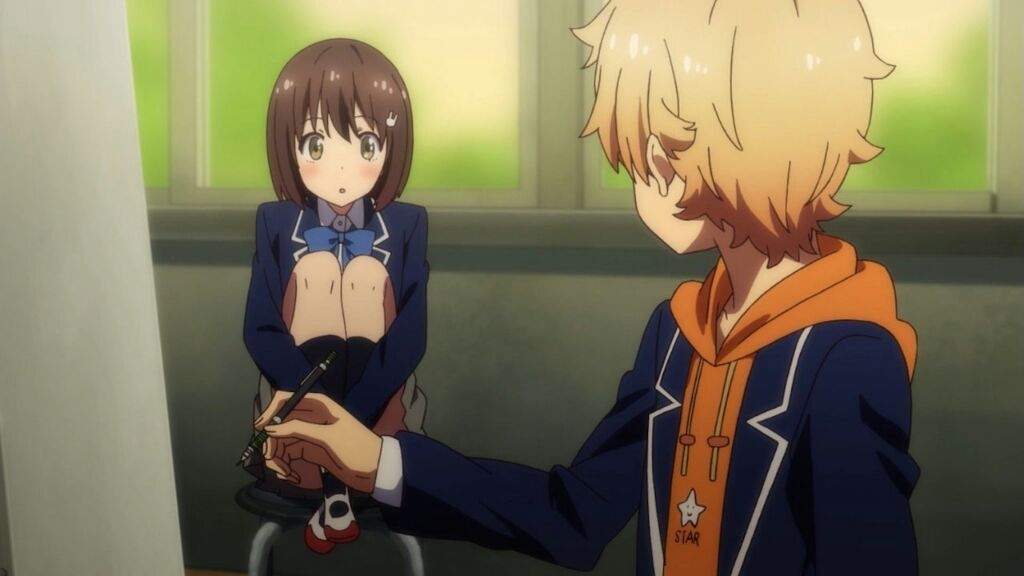 Other than these sorts of tidbits, there isn't much about the show that sticks. The animation from Feel is pretty good, but it lacks much of the character and originality seen in their Outbreak Company adaptation. It's not that it's bland, but rather the design of the characters and world seem like something you'd see in a lot of other slice-of-life series. However, they do a great job when they show off a character's anger, transforming even the most cutest girl into a snarling monster.

While most of the cast does a good job (especially when Ozawa needs to go off the rails as Usami), I need to separate Kobayashi's performance as Uchimaki for some critical docking. I get that his character seems to live somewhat in his own world of fictional crushes, but his delivery is very phoned in. Compared to his performance as Okuma in last year's sex revolution romp SHIMONETA, it's like two totally different actors. Perhaps this role was just another paycheck for him, but at the same time, Kobayashi could've put some more comedic oomph into his voice acting here. 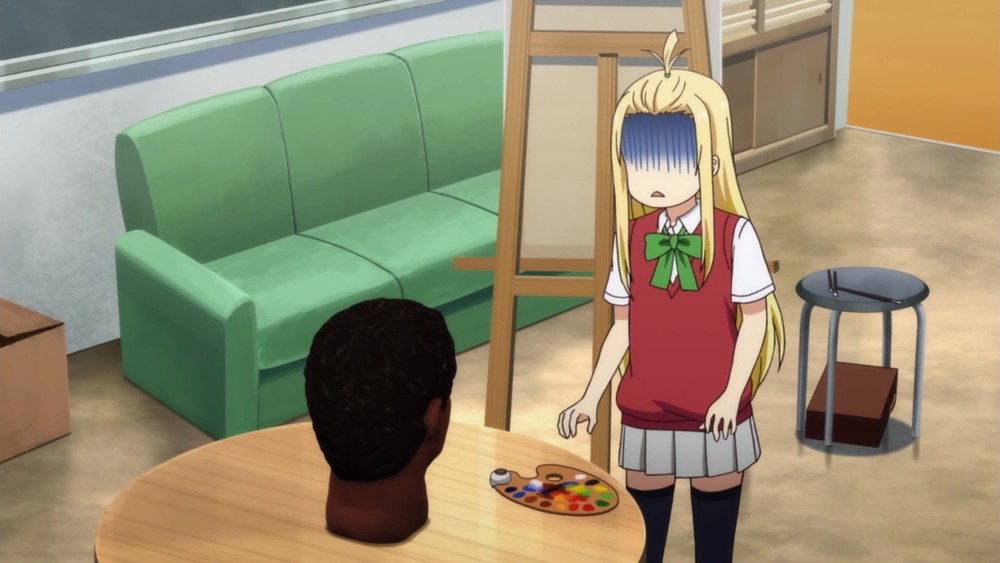 When it comes to the show's theme songs, Mizuki's opener "STARTING NOW!" has more personality jammed into it than all of the characters combined. A great sing-along chorus, cool guitar riffs, and fun mentality help to make this melody one of this year's better themes. Uesaka's "Koisuru Zukei (cubic futurismo)" is a strange one, as it sounds like something you'd hear from an early 2000-era anime. (Considering the bad CGI the end credits features, it kinda fits with what's being shown.) As for Gin's score, it's nice, but with the scenes and structure the way they are, it doesn't really hold onto anything memorable.

In the end, This Art Club Has a Problem can only be described as a show that's decent enough to stick around for. While its focus is a somewhat uninspired mess, there are still some good gags and silliness to partake in during Usami and Subaru's daily routines. Just don't expect to walk away from its gallery with anything too noteworthy to the eye.

This Art Club Has a Problem can be viewed on Crunchyroll. Episodes 1-9 were observed for this review.