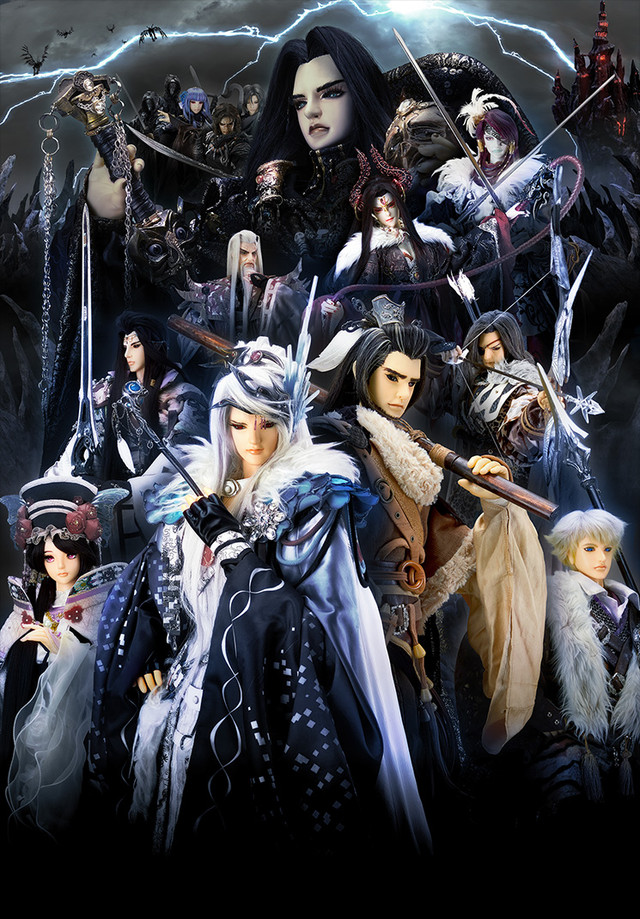 It may sound crazy, but this summer's hottest TV program isn't Preacher or Stranger Things, nor is it even an anime. Nay, that honor goes to the most epic and action-packed series quite possibly of the year: Thunderbolt Fantasy. Here's the kicker: it's a puppet show, albeit the most badass puppet show ever created!

The origin of this series is quite interesting. When Gen Urobuchi (writer of Puella Magi Madoka Magica and Psycho-Pass) was visiting Taiwan for a comic convention, he stumbled upon an exhibition booth for the country's popular Pili puppetry series. Impressed with their work, Urobuchi flew home to Japan in order to convince his Nitroplus crew to license a couple of Pili International works. Word quickly spread in Taiwan regarding his interest, prompting Pili to contact him and attempt to collaborate on an original production. Both sides came up with a concept, and thus, Thunderbolt Fantasy was born! 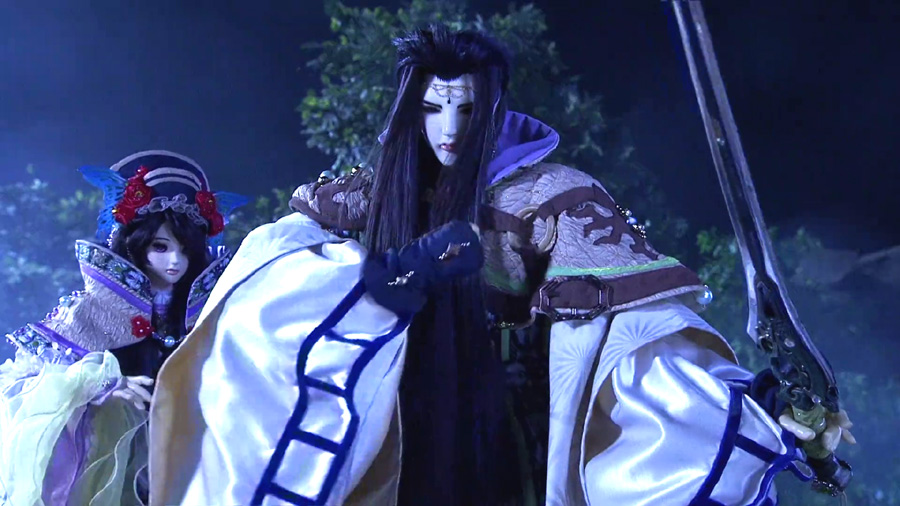 Set in Far East many a century ago, Thunderbolt Fantasy focuses on Dān Fěi (Mai Nakahara), who is attacked with her brother by the Xuán Guǐ Zōng clan. The siblings guard a sword known as the Tiān Xíng Jiàn, whose power is greatly desired by the sinister Miè Tiān Hái (Tomokazu Seki). When her brother is murdered, Dān Fěi narrowly escapes, finding help in the reluctant wandering swordsman Shāng Bù Huàn (Junichi Suwabe) and the mysterious Lǐn Xuě Yā (Kosuke Toriumi). With a couple more allies helping out -- including expert archer Shòu Yún Xiāo (Rikiya Koyama), spear wielder Juǎn Cán Yún (Kenichi Suzumaru), and the demonic necromancer Xíng Hài (Sayaka Ohara) -- the journey to defeat the Xuán Guǐ Zōng and protect the sword from falling into the wrong hands becomes the greatest challenge both for the heroes and humanity itself.

What you think of this series will depend on your reaction to the premiere episode's first four minutes. Watching the two siblings face off against Xuán Guǐ Zōng will at first make you wonder how you can take a puppet show seriously. That wonderment gets its answer with the sight of puppets sword-fighting Crouching Tiger-styled, characters spewing blood from their wooden lips, and bodies exploding into meat sacks. It is quite possibly the most violent thing you'll ever see puppets do to one another, and I dare you to attempt to not let your jaw hit the ground as you watch it. 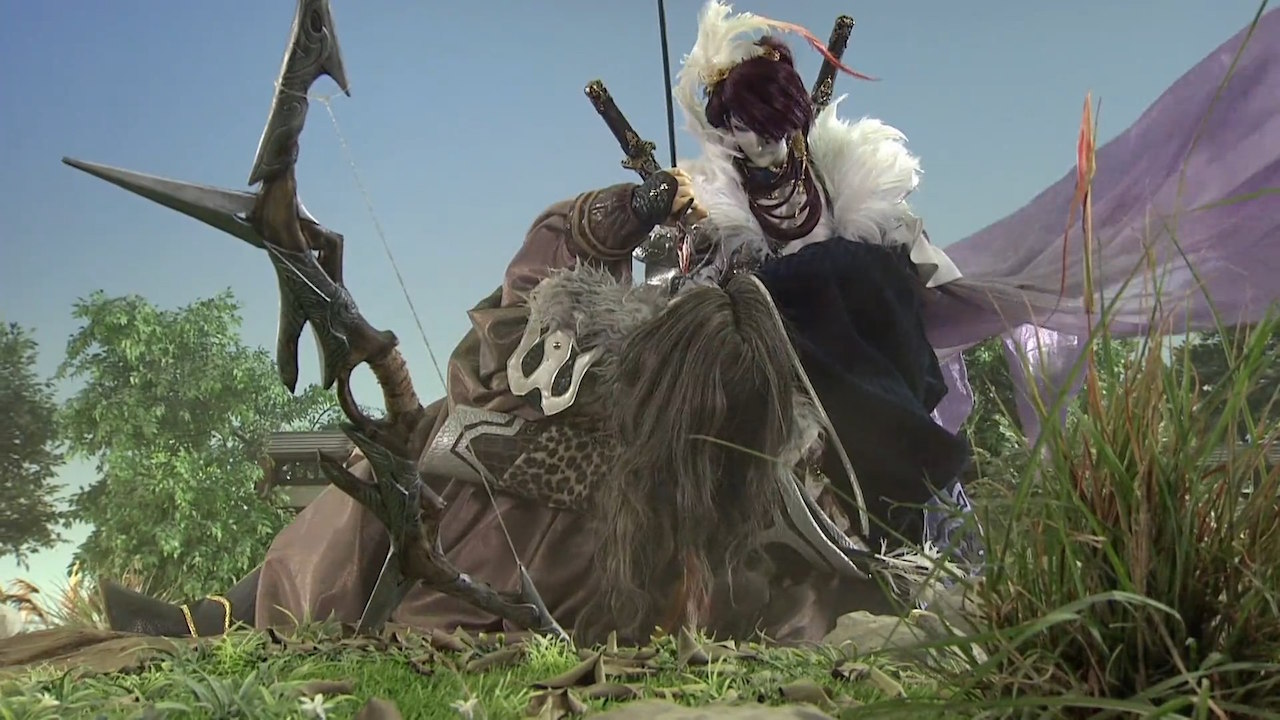 Thunderbolt Fantasy blends puppetry and CGI to a level where -- in most cases -- you can't tell which is which. Fights are pieced together with such an amazing flow, they nearly reaches realistic levels of swordplay. How the arms move, the sight of clashing weapons, the characters' means of grasping their swords in battle, and the way they charge towards one another in a fight are so tightly woven into a scene, that you'll be doing double-takes during most of its duration. Whoever it is in Taiwan that's in charge of editing these episodes, they deserve some kind of award!

Perhaps what makes this series work is the fact that Pili International can take certain liberties knowing it's a puppet show, thereby adding some strong comedic elements to the story. Shāng's reluctance to assist the rest of the heroes becoming one of the show's more humorous running gags. (How he's forced to do most of the heavy work when facing the golem guardian makes up one of the show's silliest moments.) At times, movement can be rather campy, especially when you see characters run away in a Dr. Zoidberg-like fashion. 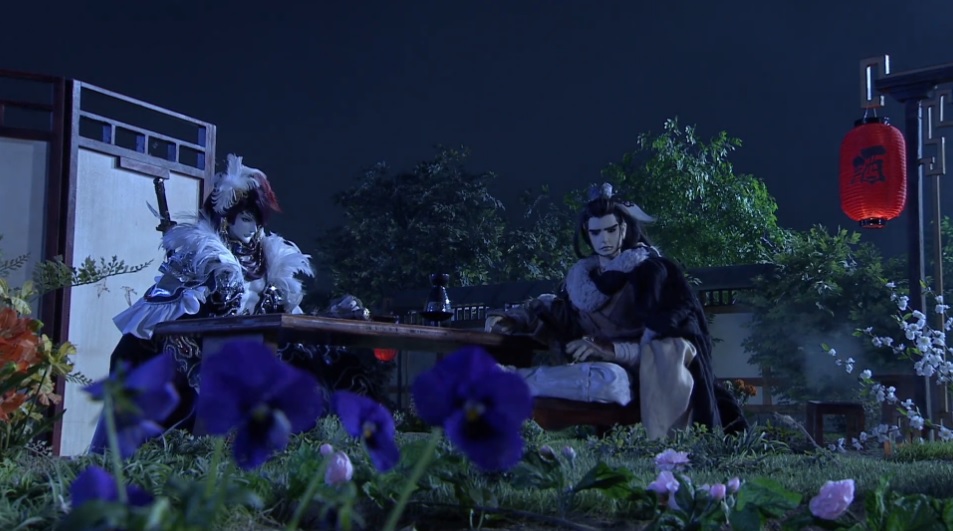 However, the most important aspect of Thunderbolt Fantasy is its writing, and Urobuchi's pen is as mighty as the swords wielded in this series. There are moments when you're treated to some surprisingly emotional moments, especially when it deals with Dān Fěi's desire to seek vengeance against Miè Tiān Hái. However, she quickly discovers her own faults, down to even the fighting style taught to her not being well-suited to her being, well, the wrong gender. What Thunderbolt Fantasy does wonderfully is show the flaws these characters have, but yet -- despite them -- it pushes them closer to persevere against the evils that await them.

While the work of the puppeteers deserves most of the credit, the Japanese voice cast also should be worth noted for their hard work. Nakahara's Dān Fěi is filled with both spirit and sympathy, with the heavy task placed onto her shoulders being very evident every time she speaks. As Shāng, Suwabe delivers a don't-care attitude that comes bundled with a reluctant heart. Toriumi brings a level of wisdom and smarts to the team as Lǐn Xuě Yā, with every emphasis he churns out showcasing some of the plot's greater importance. Perhaps the showstopper of the series, Suzumaru has a humorously idol-like attitude in his performance as Juǎn Cán Yún, knowingly being as equal a pretty face as he is a fighter.

Thunderbolt Fantasy is unlike anything these eyes have ever seen. Violent, action-packed, humorous, and surprisingly deep, these puppets bring more life to the screen than most of the current live-action series airing on TV. It may raise an eyebrow or two while you first watch it, but by the end of the first episode, you'll be cheering on Shāng, Dān Fěi, and the rest of the heroes that are sworn to protect the Tiān Xían Jiàn. Thunderbolt Fantasy brings a new level of majesty to puppetry, one that could forever change the perception of what can be accomplished in that art form. Muppets be damned!

Thunderbolt Fantasy can be viewed on Crunchyroll. Episodes 1-7 were observed for this review.