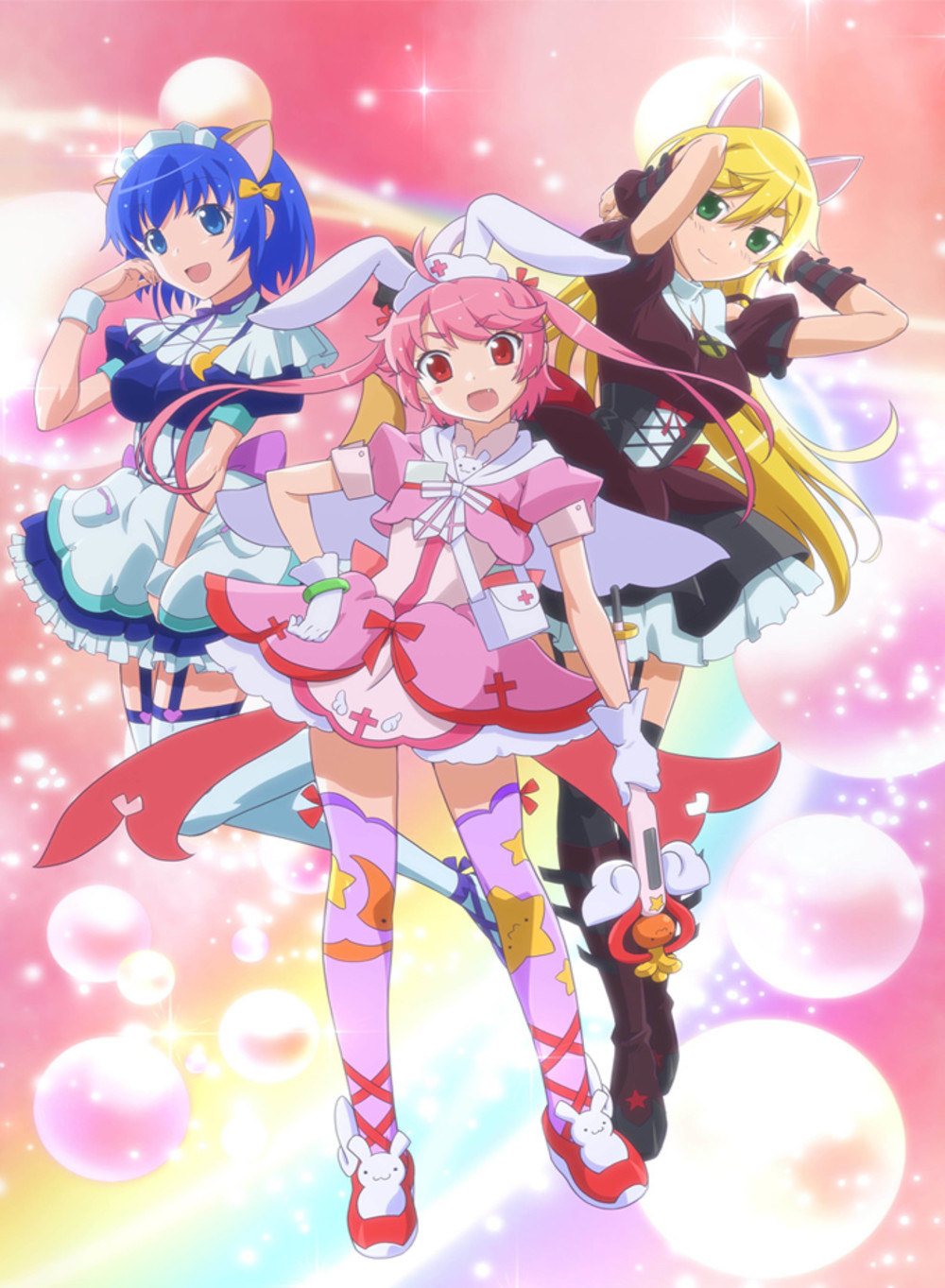 In 2001 Tatsunoko Productions, known for their colorful characters such as Yatterman and Gatchaman, took a bold route with the creation of The SoulTaker. It was dark, violent, and a far more mature series than what was in their usual collection. To balance out this darkness, a spinoff series that both parodied The SoulTaker and the magical girl genre was brought to life in the form of Nurse Witch Komugi. Guess which one of these got green-lit for a reboot?

Okay, perhaps I came off a bit snarky there. Truth be told, I loved Nurse Witch Komugi, as it not only was hilarious, but also pointed out just about everything wrong with the magical girl universe. So when word got out that they were bringing back the series, I was genuinely excited. After all, Tatsunoko did a great job last year with Yatterman Night, so I figured there wasn't much to worry about. As I started watching the show my excitement began to die down rapidly. 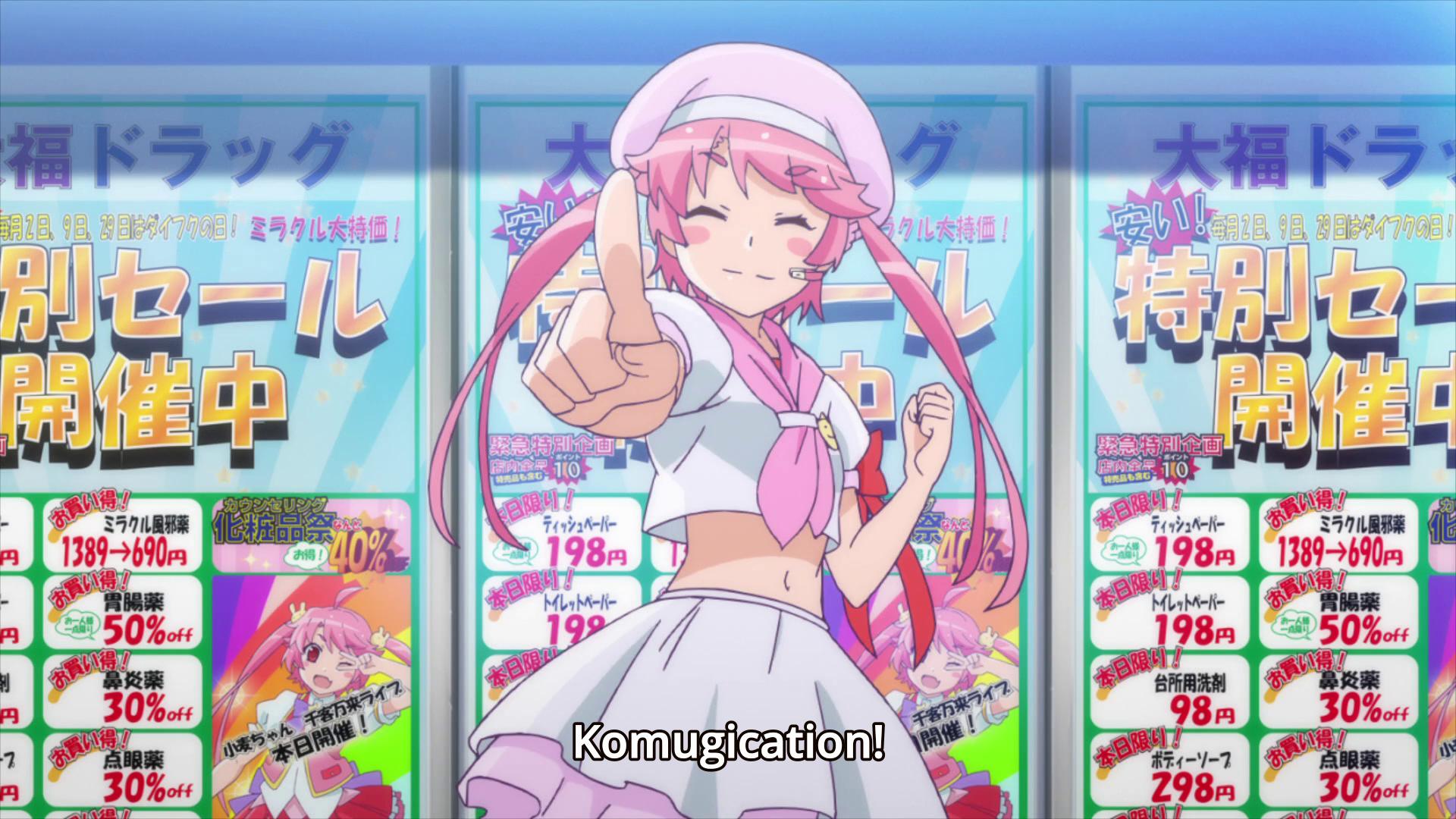 The new series, Nurse Witch Komugi R, follows the title character (Kei Tomoe) as she balances her middle school life with that of being an up-and-coming pop idol. Along the way she comes across a magical creature named Usa-P (Hiroyuki Yoshino), who grants her magical girl powers in order battle monsters and collect them in card form once defeated. Meanwhile Komugi's friends and fellow idols Kokona (Erii Yamazaki) and Tsukasa (Makoto Koichi) find themselves in the same boat, as they too are given magical girl powers by the creatures Tanu-P (Daisuke Namikawa) and Neko-P (Ryota Takeuchi), with the race being on to see who can defeat more of these evil creatures that keep popping up.

One of the big problems I have with Nurse Witch Komugi R is that it lacks the parodic attitude of its predecessor. Instead of poking fun of the magical girl genre, it instead embraces it in a way that makes it feel more like something out of a Pretty Cure series. It doesn't even feel like satire, it's just a full-on magical girl show when it gets into fight mode. As someone who was a fan of the original, it feels like everything that made the original Nurse Witch Komugi the show that it was is non-existent. It's Sailor Moon Crystal all over again, only instead this series' identity is completely washed away. 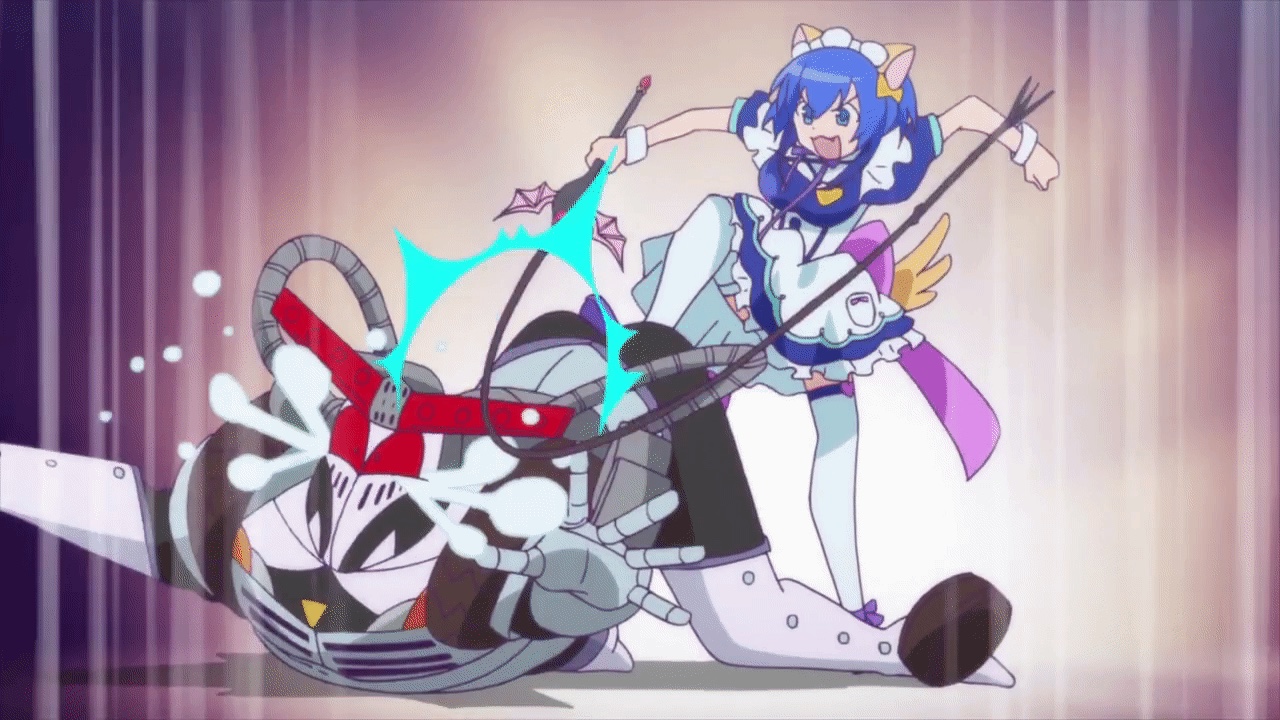 I'll admit the show has some pretty silly parts to it, outside of the magical girl stuff. It's humorous to see Komugi's core fanbase being these senior citizens, as they'll literally throw their backs out during one of her performances. The character of Tsukasa is also a lot of fun to watch, as she switches from her androgynous idol mentality to a pure girly-girl when no one is watching. Hell, it's even funny watching the idols acting on their TV series, with Komugi often playing the role of the corpse. (Komugi's prep work for her hot springs show is also a hoot to watch, as her agency forces her to trek the long miles on foot to get a real performance out of her.)

And yet, even with the good stuff there I know that this isn't the Nurse Witch Komugi that I watched once upon a time ago. It's not even close to the original, with the only thing that's seemingly the same being a couple of the core characters; and even that's a very far stretch. Personalities have changed, the pervertedness of the original has all but been eliminated, ages have been lowered, and the entire tone of the series has been switched around. What was once an in-your-face parody is now just an average magical girl show, and after watching all the episodes that have currently aired it hurts to admit this truth. 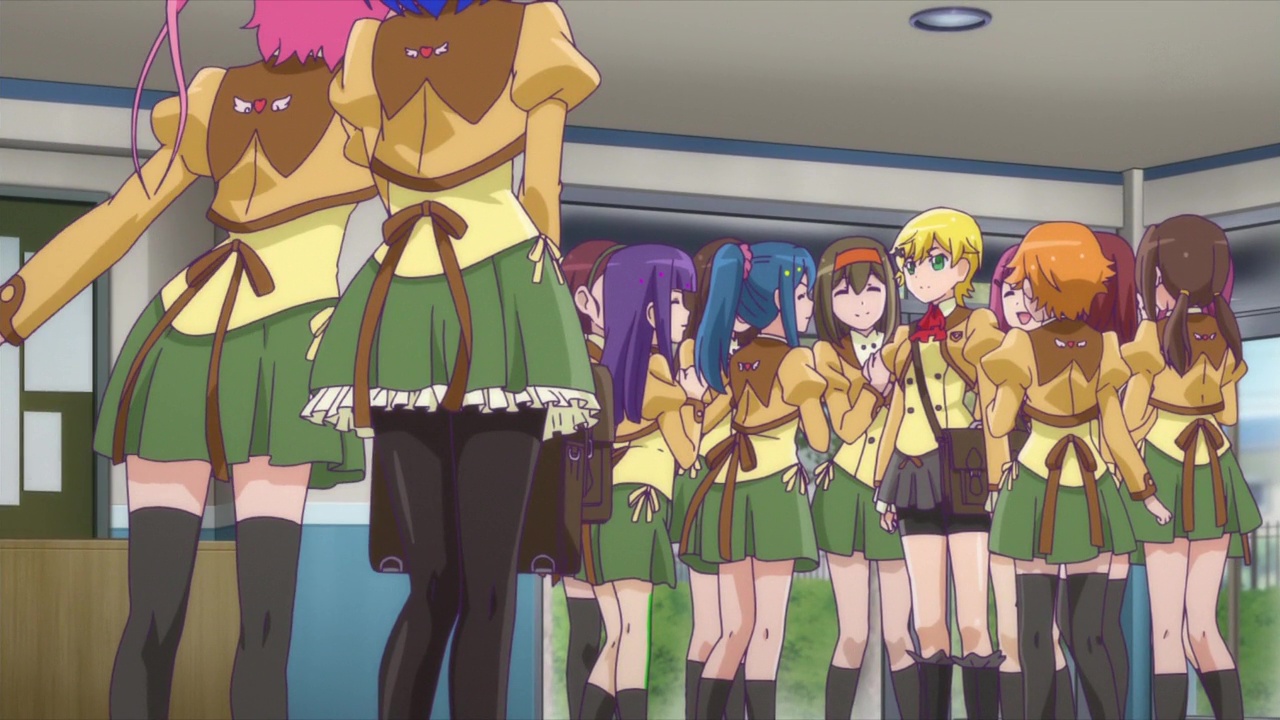 Animation-wise the series can also be very hit-or-miss. At times the characters can look rather gloopy when normal, and even when going for an exaggerated response they look even more worse than usual. The action scenes can be rather lacking in execution, as if Tatsunoko didn’t think this part of the show was all that important and wanted to get back to the idol parts in the show. It’s a sad moment in an anime when the best-looking parts are the CGI idol music segments, which have a similar flow and style to that of the Love Live series.

As for the voice acting Tomoe, Yamasaki, and Koichi do a good job with their portrayals of the idols-turned-magical girls, but with the sort of material that is given for the actual battle sequences they lack a sort of enthusiasm that comes across far stronger in any Pretty Cure or Sailor Moon series. The music can also feel rather throwaway, with Kosuke Yamashita’s score sounding rather bare bones and lacking any sort of personality. Even its opening and closing themes “Ready Go!!” and "Ame to Namida to Otome to Teriyaki” sound like very stereotypical fare, with the voice actresses performing the songs with a bland enthusiasm. 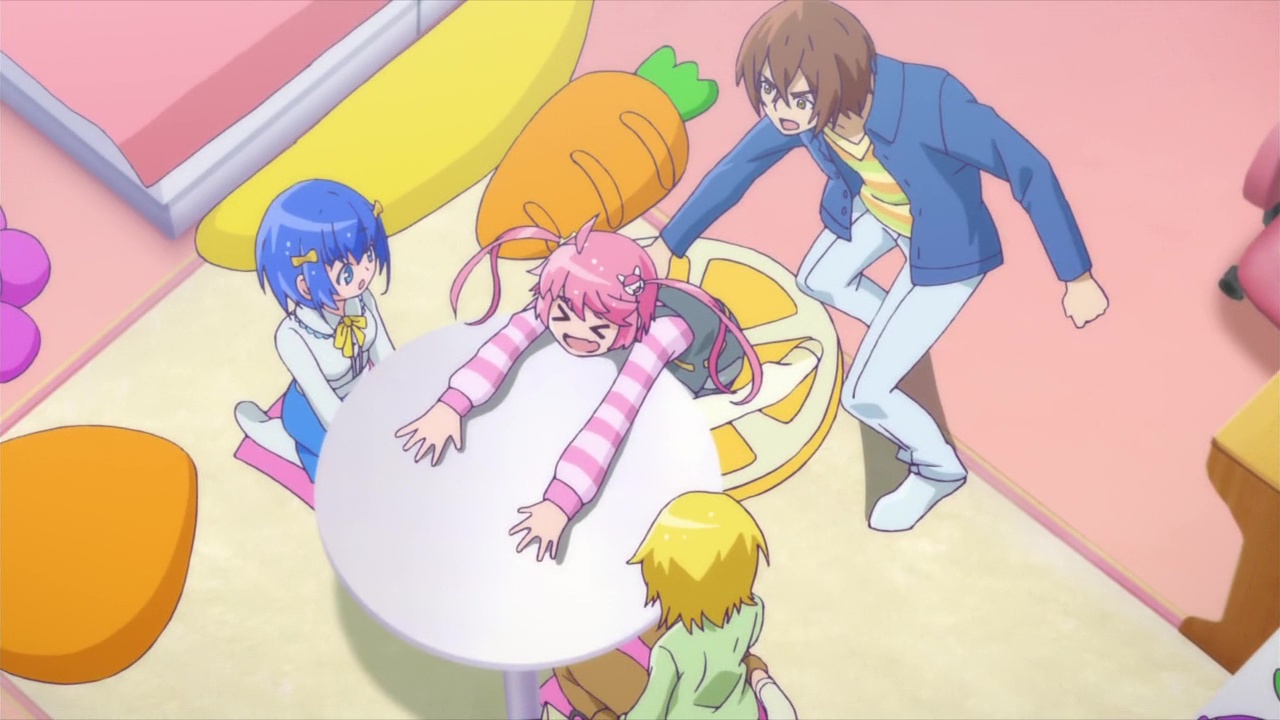 As much as I want to find something worthy enough to make people tune into Nurse Witch Komugi R, I can’t. Fans of the original will hate it, and people who are new to the series will just see it as a subpar magical girl anime series. Although there are some good laughs to be found here, there are far better shows out there that will deliver tenfold of what Tatsunoko’s reboot sprinkles about.

I can’t believe I’m about to say this, but if you want a better recent parody of the magical girl series, stick with Mahou Shoujo Nante Mou Ii Desukara. Each episode is three minutes long, and delivers more laughs in that timeframe than what Komugi R can give in a 22-minute runtime.

Nurse Witch Komugi R can be viewed on Crunchyroll, Hulu, and the Anime Network. It has been licensed by Sentai Filmworks. Episodes 1-10 were observed for this review.