Oh licensed-based video games. Sometimes you can't help but fill up with an impeccable amount of rage when you see those words together. Sure there have been diamonds in the rough like Alien: Isolation and Atari's Ghostbusters, but roughly nine out of ten times the games starring your favorite film and TV characters will leave you filled up with crazy anger over how bad they can be.

Big Pixel Studios' Pocket Mortys, on the other hand, is part of that incredibly rare breed of games: a mobile free-to-play based on a beloved cartoon that's not only fun, but also captures the spirit of the show it's based off of. In laymen's terms: it's the fabled unicorn of the gaming realm. 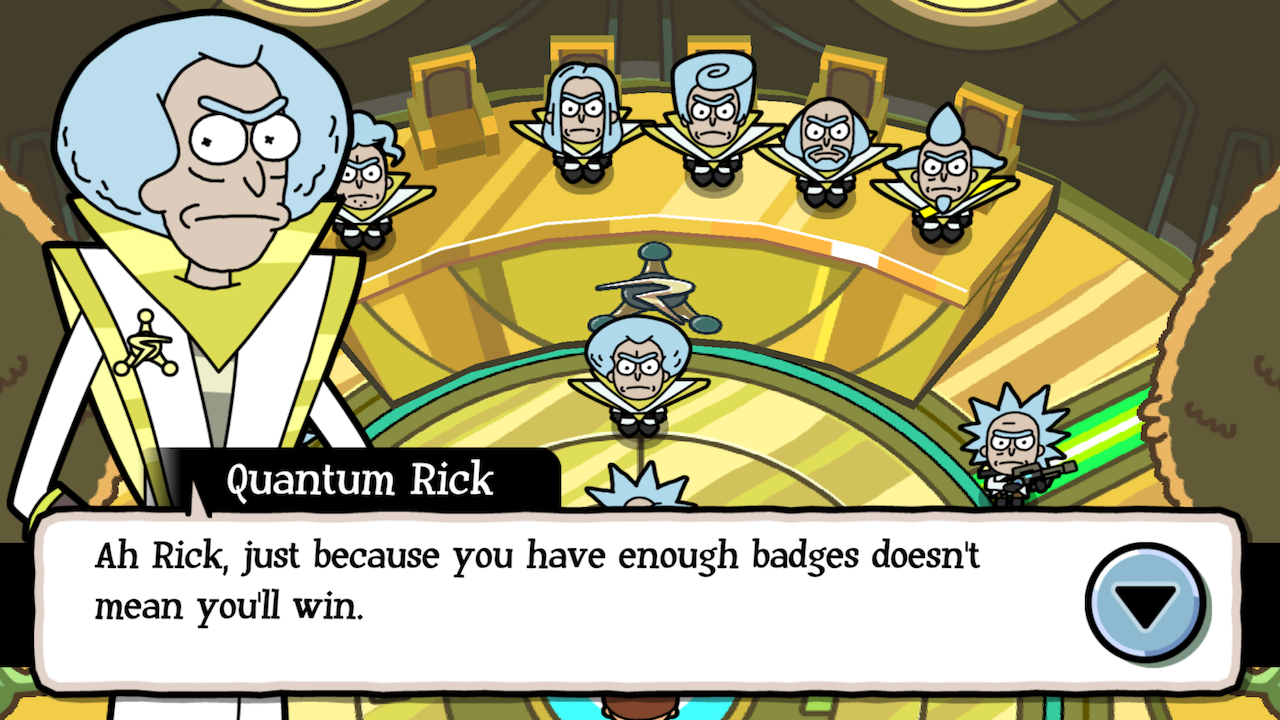 Taking place in the multiple universes of [adult swim]'s Rick & Morty, Pocket Mortys has the world's favorite grandpa/grandson duo face-to-face with the Council of Ricks. As usual the Council is pissed at Rick because, well, they're douchebags and have nothing else better to do than to bother the drunken master. From there Rick and Morty must team up to battle various other Ricks, while on the way collecting & leveling up other Mortys and compete for gym badges.

If this is all sounding familiar to you, it's because it should. Pocket Mortys is basically Pokémon in the Rick & Morty realm. Instead of collecting water or plant-type of creatures your Mortys will consist of the rock/paper/scissors categories, and if you've ever played a little jan-ken-pon you can take a wild guess as to which is stronger or weaker against one another. As there are many universes in the show, there are many different types of Mortys you can collect and battle against such as Rabbit Morty, Spork Morty, Stray Cat Morty, and nearly 80 more variations of the whiny grandson. 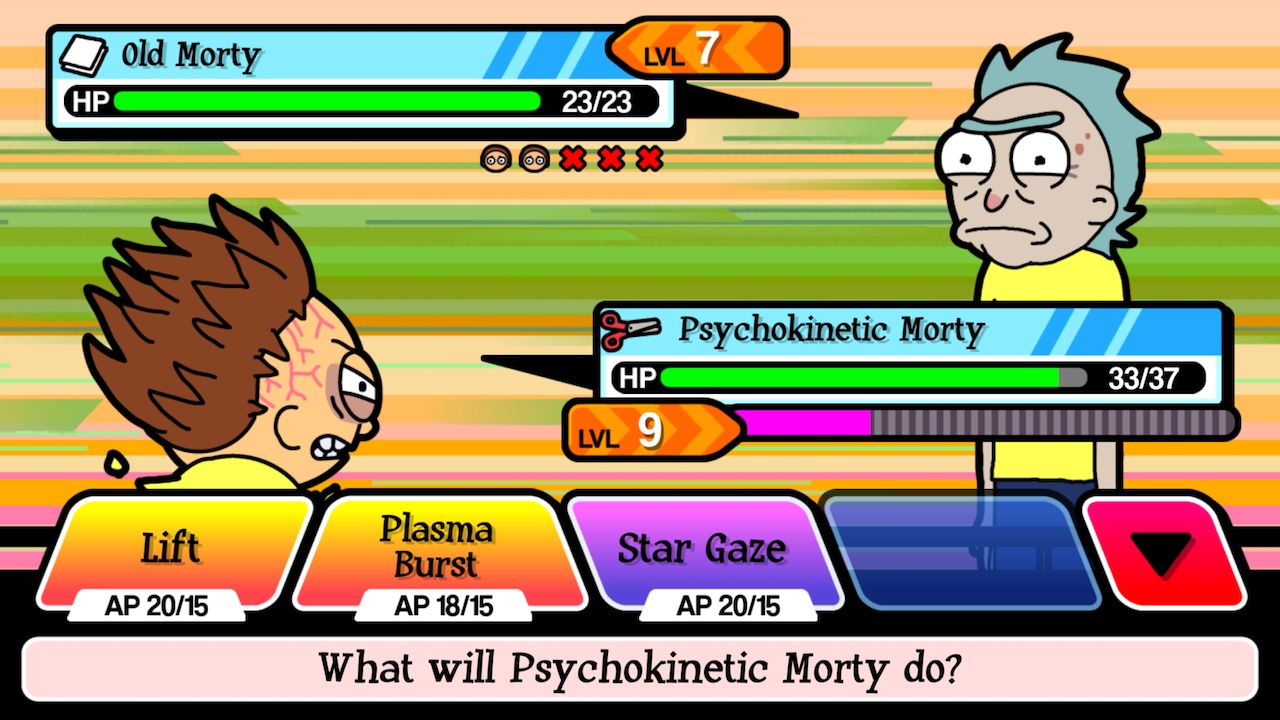 Battling stray Mortys can not only help to level up your own, but with the Morty Manipulator Chip you can also add them to your team. While it does cost a pretty Schmeckle to buy a Manipulator, they come in very handy when you need to add something more powerful to your roster. You can also grab Mortys via the Blips and Chitz displays using real-world coin, but that's only if you are in a hurry to grab them all. Collecting two of the same kind of Morty can also lead towards combining them to make a more powerful one.

Pocket Mortys is a fun mobile game because it wonderfully emulates the style of Pokémon nearly to a T. While other Ricks, trainers, and Mortys may not come out of the fields to surprise you in battle, everything else about this Rick & Morty title works flawlessly in the same way that Game Freak's creation does. Morty battles are very exciting to take part in, and with the added humor that Dan Harmon & Justin Roiland's creation brings to the table the game is never short of laughs. 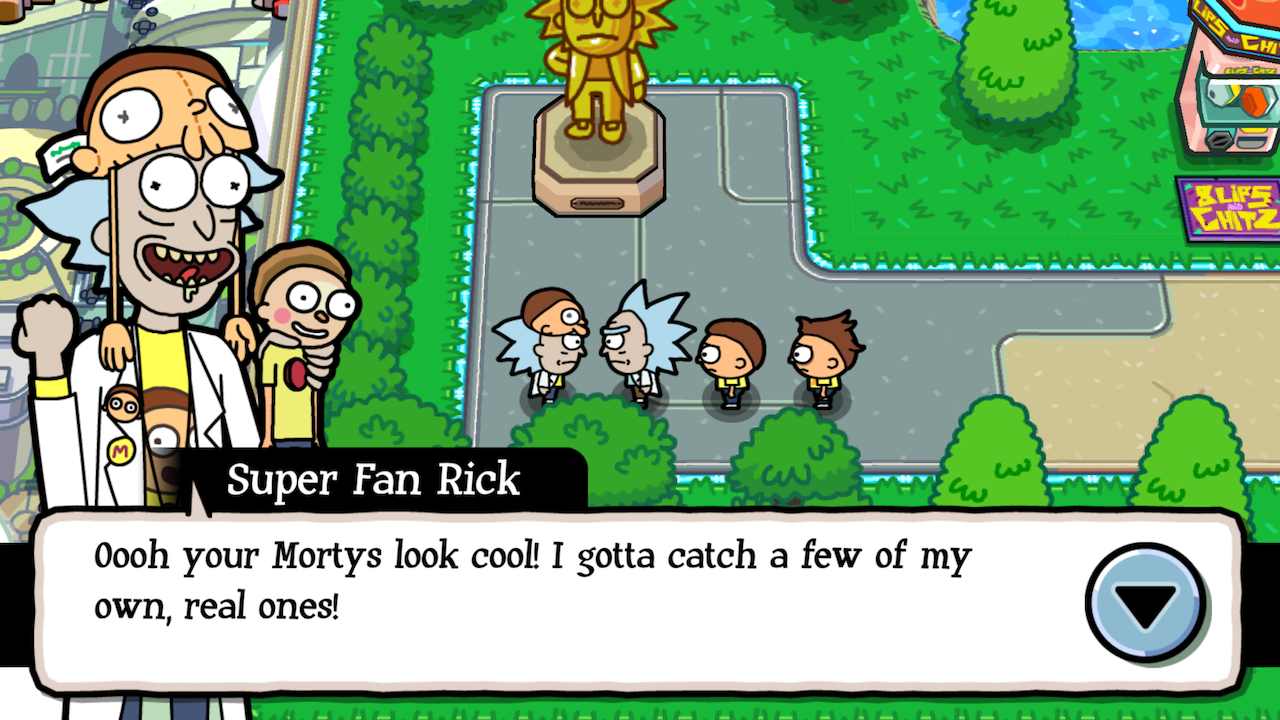 As you play you can take on certain quests to help other good-natured Ricks and some other familiar characters from the show. Once a quest is completed you may receive either some extra coin or an item that you may greatly need to help level up or heal one of your Mortys. (The latter really comes in handy, as there is a lack of hospitals in the realms you enter via portal.) I highly recommend taking these quests at hand, because what you may get from them may help you somewhere in the game's future.

There are, of course, some downsides to Pocket Mortys. As of this review there is no way for friends to battle their Mortys against one another, which would've made the gameplay just a little more special. In a couple areas of my play-through I did experience a couple of game crashes, but fortunately I never had to restart anything that I had completed before the game shut down. (This could be attributed to me playing the game on older devices, so these issues may not happen on newer phones or tablets.)

For a free-to-play mobile title, Pocket Mortys packs a lot of fun and humor that you'd come to expect more from a retail release. With many hours of gameplay and a good chunk of Mortys to collect, Big Pixel Studio's latest foray into the Rick & Morty realm is simply a blast and a half to experience. In short: Pocket Mortys will have you shouting, "Wubba lubba dub dub!" but only in an ironic sense.