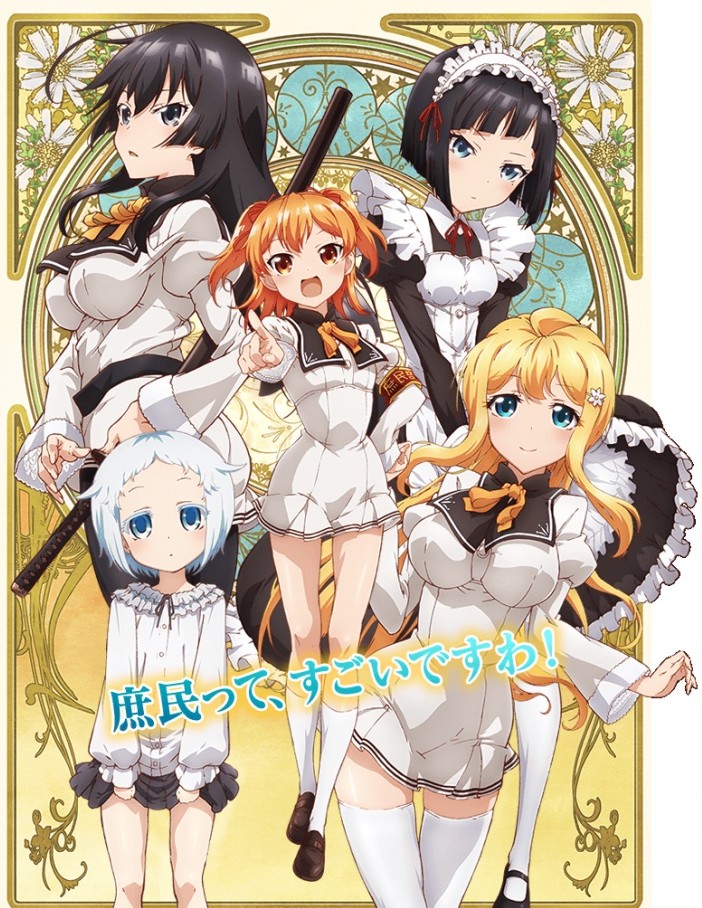 Is it possible to live a life of luxury without a certain amount of street smarts? Can one order the finest of French cuisines, only to be baffled by the concept of an Extra Value Meal? Does such a thing as a backwards My Fair Lady scenario even exist? I wouldn't be too shocked if the rich 1% of the world's population lacked the brainpower to deal with simple tasks as ordering a pizza or -- in an extreme case -- dressing appropriately by themselves. Nevertheless this sort of situation has been delivered to us in the form of the new anime comedy series Shomin Sample.

Shomin Sample focuses on the ordinary high schooler Kimito Kagurazaka (Atsushi Tamura), who finds himself swept up in class by a bunch of oily musclemen and taken to Seikain, an all-girls academy for the rich and proper. The students there are cut from the rest of the world, as a way to keep them pure and innocent, but in the past this has led to graduates feeling isolated and swamped in an unfamiliar territory. Hence Kimito has been chosen to show these students how the world of a commoner works, which all sounds good at first. Unfortunately Seikain only chose Kimito because of some misinformation, as they think he's gay with a massive muscle fetish, and because of this he must hide his straightness in fear of either being forced out of the country or -- worse -- having his manhood chopped off. 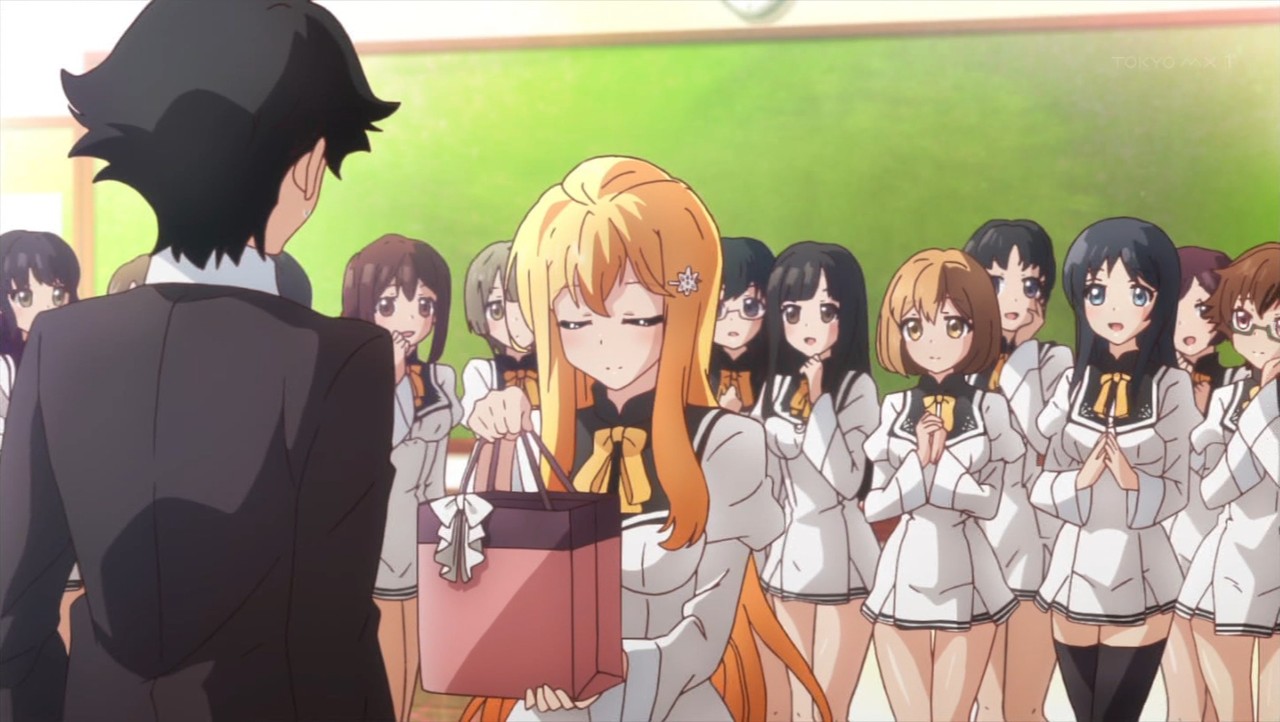 Upon entering Seikain the female students appear amazed of what the commoner can accomplish, despite the fact that his tasks are incredibly simple. Since the women of the academy tend to go the more elegant route the easiest of tasks wind up being more complex than they should be. (Although the thought should be appreciated, the process of returning one's cell phone does not need a written thank you letter, a box of chocolates, and everything placed neatly into a designer bag.) Quickly getting his attention is Aika Tenkūbashi (Yū Serizawa), a naïve student who wants to become common as quickly as possible in order to gain friendship. Hence the Commoner Club is formed, with fellow classmate Reiko Arisugawa (Rika Tachibana), the anti-social prodigy Hakua Shiodome (Yūki Kuwahara), and the samurai-spirited Karen Jinryō (Chitose Morinaga) all joining up to take part in the shenanigans that take place.

It's apparent that Shomin Sample doesn't want to put anything realistic into these scenarios, as it is almost next-to-impossible for someone -- let alone an entire academy -- to go their entire lives without even the tiniest bit of knowledge of the outside world. Experiencing it, yes, but has there been an actual situation where a teenager looks at a manga or comic book and have no idea what it is? Unless that person has lived their lives off the grid in some Amazonian forest, probably not. This is where the concept of the theatre of disbelief must be thrown in to fully enjoy it, and once that's in place the show becomes quite enjoyable. 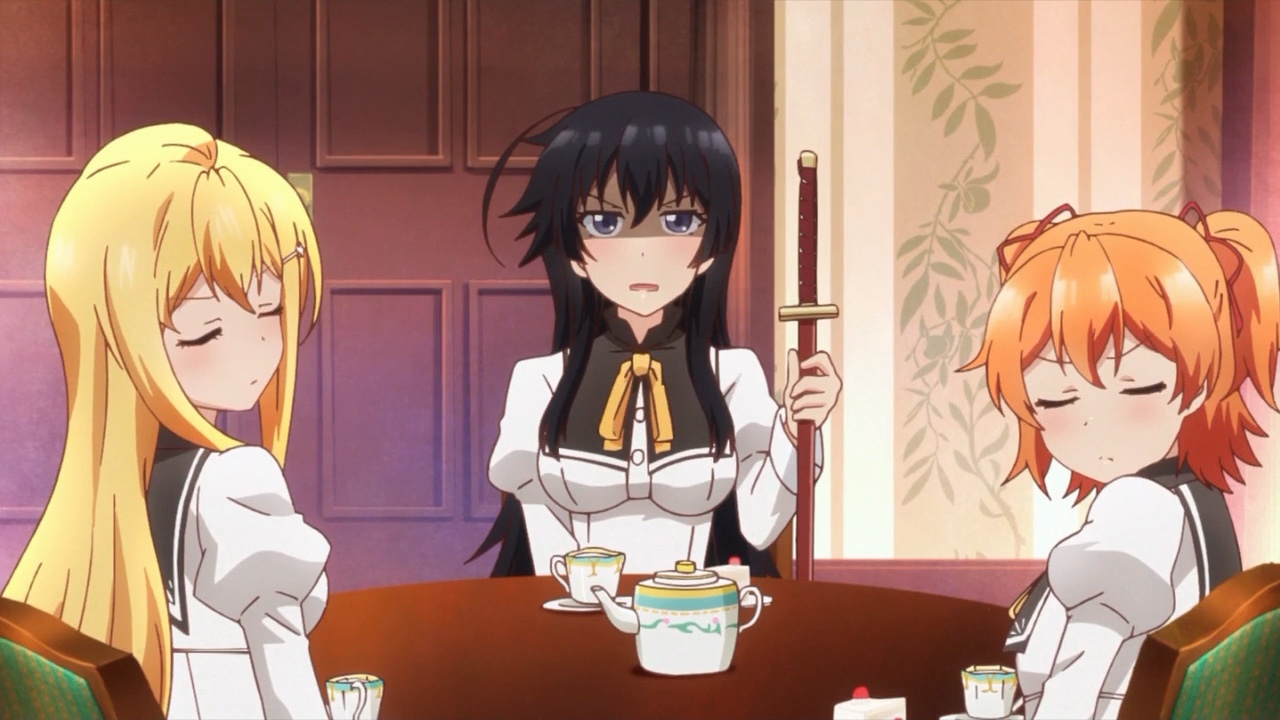 The harem situation between Kimito and the rest of the Common Club can be predictable at times, but it's when you see the women react to the outer world's customs when things get very entertaining. When the students attend a theme park based off of the real world (which, in turn, sounds like something British street artist Banksy would pull), you see them panic over ordering fast food, learning how to play the crane game, and partaking in daily suburban routines. It's goofy and stupid, but in a way it acts as a commentary of sorts on why a sheltered life is a terrible life to live. Surprisingly, within these dumb antics, is some underlying intelligent writing.

Not everything that goes for laughs works, though, as apparent with the character of Hakua. Her prodigious mindset starts off as fun to watch, until you see she gets into the habit of stripping naked while hard at work. This wouldn't be an issue if it weren't for the fact that this particular student looks like a grade-school child. It's very wincing when this happens, although seeing the warrior-like Karen bleed from her nose with glee as this occurs does get a chuckle. Nevertheless it's an incredibly unnecessary character trait that should've been taken out. However watching Kimito and Hakua interact like big brother and little sister is adorably hilarious, whether it's watching the smart kid be stumped by simple riddles or seeing the two be fawned over by every single maid that roams the academy grounds. 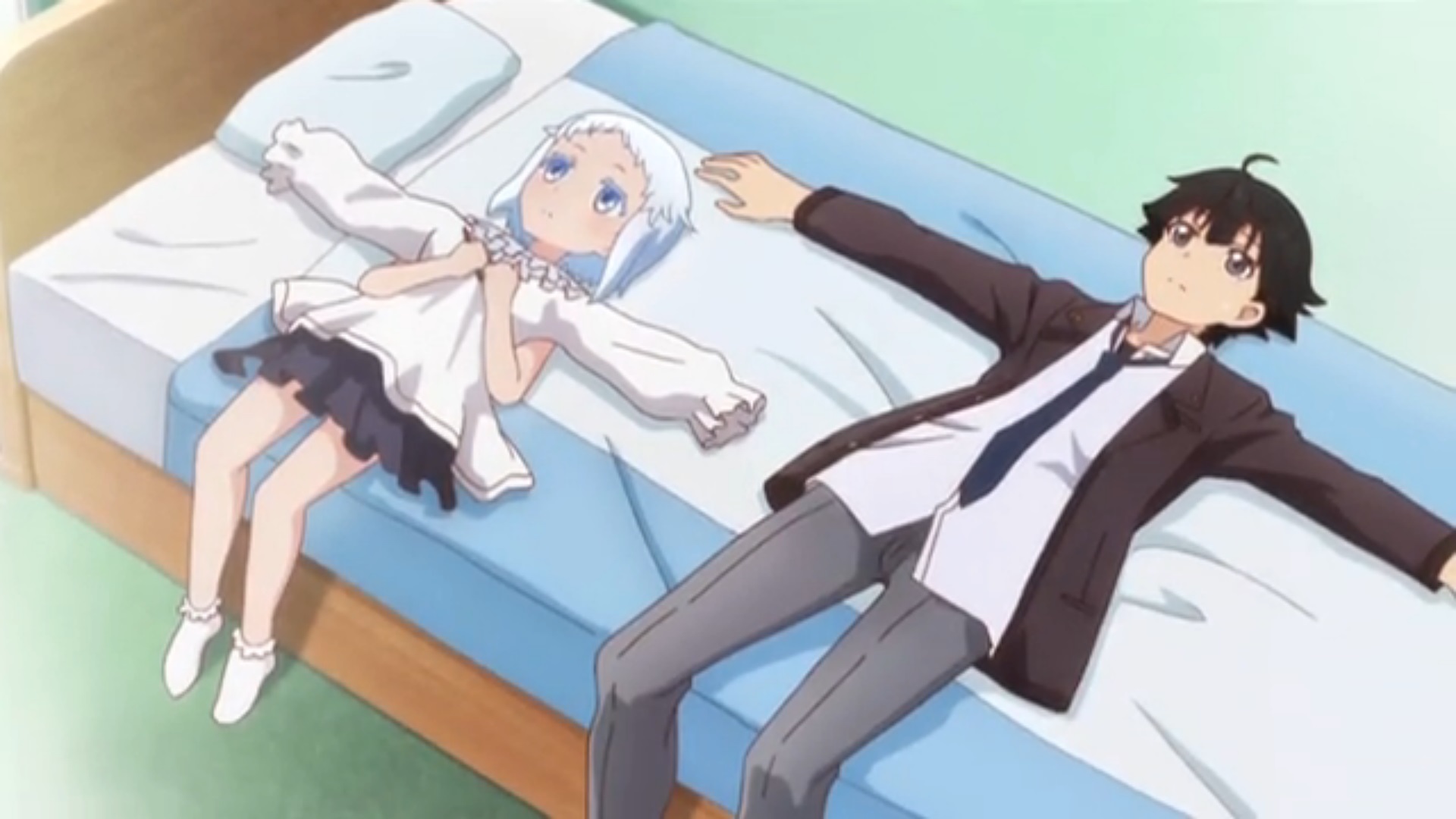 Studio Silver Link (Baka & Test, WataMote) captures the academy's elegance fairly well, although there are moments when areas appear foggy. While the show's animation does shine in places, especially in ballrooms and bedrooms, there appears to be a pane of blandness that shields the outer world of Seikain. Character models and expressions are pretty good, but they lack the sort of personality that Silver Link usually places within their regular series. (Considering that they're working on the Anti-Magic Academy adaptation at the same time, you can probably guess which show is getting more bang from their current budget.)

Thus it is up to the voice cast to add an extra dose of personality to Shimon Sample, and fortunately for them it's just the right amount needed to keep it from being another bland harem comedy. Tamura's Kimito brings the funny with his commoner mentality in a higher-classed academy, not to mention with his reactions to when things that should be more common being too well-done. (His speech on why the fast food burger in the theme park is not common enough will surely get a chuckle out of any foodie.) Serizawa's emphasized performance of Aika brings forth a stronger reaction to the more comedic gags she has to offer, with her enthusiasm to learn very apparent in her voice. Tachibana does a good -- albeit standard -- job with the more princess-y role of Reiko, wheras Kuwahara's Hakuo brings the character's coyness to a believable level. The show-stealer here, though, is Morinaga's Karen, who can flip from hardened swordsman to cutesy high school girl in a wonderful ebb and flow. 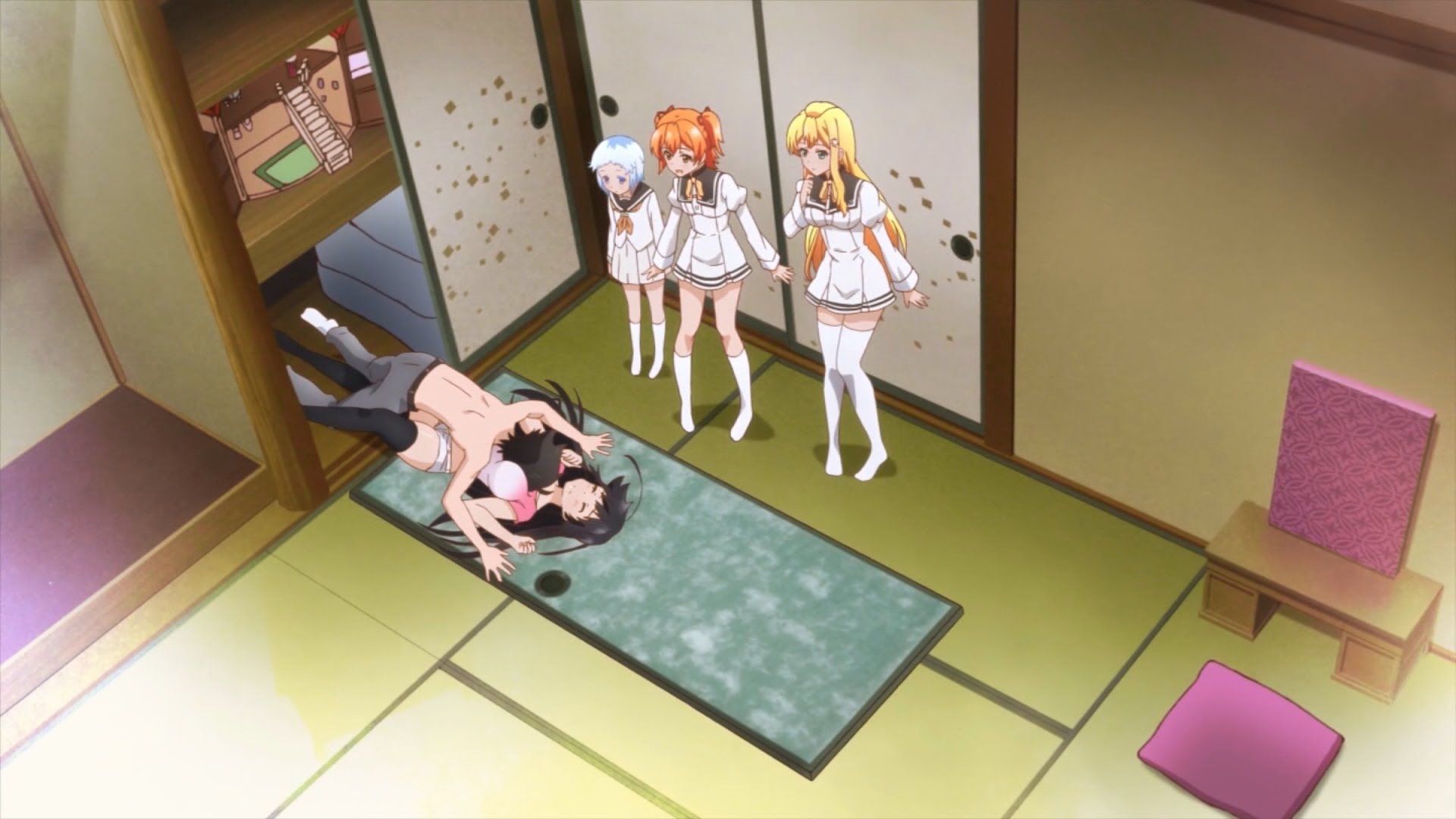 Composer Hiromi Mizutani (Hell Girl, Toriko) captures the sounds of a hotty-totty academy fairly well, with a certain essence of high standards filled throughout its score. The way it balances between classical pieces and silly melodies helps to fit with the show's overall comedic tone. Opening theme "Ichizu Recipe," performed by the main female seiyuu, is wonderfully catchy, with its blend of mainstream pop with some old-time French melody undertones. Ending song "Twilight ni Kienaide" is also quite warmhearted, with vocalist Yumi Hara bringing together a song that is simply nice on the ears.

Shomin Sample requires a lot of throwing reality to the curb as you watch, so it may not be for everyone. However those who can sit through some of the anime's stupidity will find themselves hopefully rewarded with some good laughs and some fine character development. It may not truly be My Fair Lady told in reverse, nor is it one of this year's best, but Shomin Sample is a fairly entertaining series that will leave some sort of joy in your heart as you watch it. Commoners and high-classed folk can at least unite together here for a good chuckle, and perhaps a better understanding of each others' statuses.

Shomin Sample can be viewed on FUNimation.com and Hulu, and has been licensed by FUNimation. Episodes 1-9 were observed for this review.