HomeAnimeANIME REVIEW | Supernatural Goofiness & Stupid Fun In "Actually, I am..."

ANIME REVIEW | Supernatural Goofiness & Stupid Fun In "Actually, I am..." 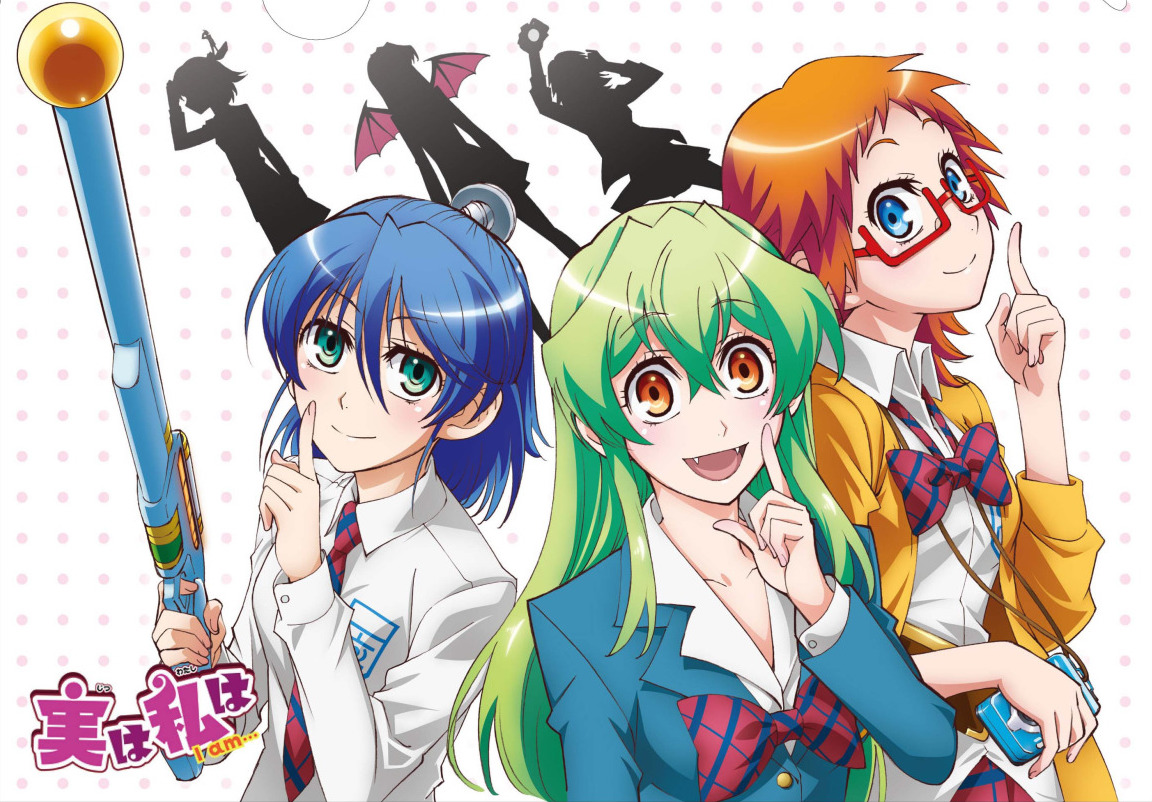 ANIME REVIEW | Supernatural Goofiness & Stupid Fun In "Actually, I am..."

Looking through the promo pics for Actually, I am... I was not quite impressed with its visual aspect, almost to the point where I was going to pass on it and direct my attention elsewhere. Of course the concept of not judging books by their covers is a common occurrence in the anime realm, so naturally I caved in and gave it a viewing. While my instincts regarding its animation may have been on the money, I was not expecting to enjoy this series as much as I did.

Actually, I am... focuses on Asahi Kurohime (Natsuki Hanae), a high school student who is the absolute worst keeper of secrets. So much so, in fact, that his friends and classmates have given him the unfortunate nickname of "leaky basket." After building up his courage he decides to confess his feelings to Yoko Shiragami (Yu Serizawa), who keeps to herself for mysterious reasons. Upon entering the classroom Asahi finds Yoko alone in class, with vampire wings stretched outwards. Because he found out about her true vampiric ways Yoko says that she can no longer attend school, but after a series of heavy promises Asahi swears that her true nature will never be discovered by others. 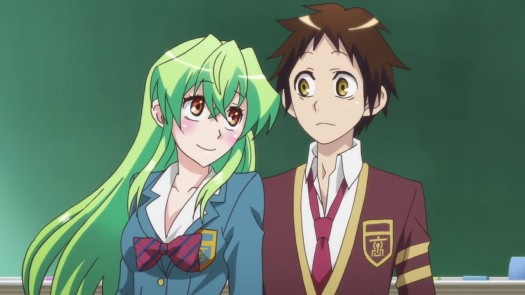 Once Asahi discovers Yoko's secret, more hidden truths about the student body are quickly revealed. Fellow classmate and former love interest Nagisa Aizawa (Inori Minase) winds up being a small alien controlling a robotic body; Yoko's childhood friend Shishido is discovered to be a wolfman (Kenichi Miya) who switches to a girl (Aya Uchida) when they see the moon; and the principal Akane (Mao Ichimichi) is a thousand year-old demon with a massive sweet tooth. As these secrets keep piling up, the task of keeping it all hidden becomes harder on Asahi the longer he holds it in.

As mentioned above Actually, I am... isn't quite as visually appealing as many of the other series that are airing right now, a shocker considering that renowned studio TMS Entertainment (Lupin III, Detective Conan/Case Closed, Gugure! Kokkuri-san) is producing it. Character faces can be a little stoic, and the world that surrounds them lacks the sort of life you'd usually see in a high school romantic comedy. Even its color scheme can be a bit of a turn-off, as everything seems to be as faded as an old shirt that's gone through the wash one too many times. 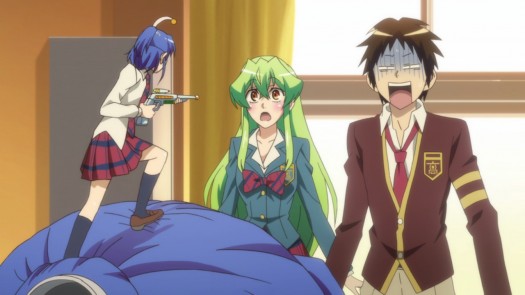 It's a shame that the anime looks that way, because it's the writing that winds up being both stupidly funny and all-around clever. Adapting Eiji Masuda's original manga (which is getting a US release next year under the title My Monster Secret) Kenichi Yamashita delivers some pretty big laughs, especially when it comes to the character of Yoko. When first introduced she appeared haughty, but once her true colors are revealed the idiot hidden deep within suddenly springs to life. It's because of her ignorance towards Asahi's true feelings and how she deals with her vampiric lifestyle that makes it such a joy to watch Yoko act like a lovable goofball.

A great example of this appears in Episode 5. While the sun does not kill her, Yoko gets an instant tan whenever she goes outside. Asahi and Nagisa attempt to help her train to avoid the sun and leap towards any shaded area she can reach, but to no avail. As she is about to give up Asahi asks if she had ever tried a certain over-the-counter product, leading towards a hilarious punchline. The same episode also has Yoko and Asahi attending a theme park, where a confrontation with a park actor dressed as a vampire delivers a huge laugh regarding blood-sucking consent. 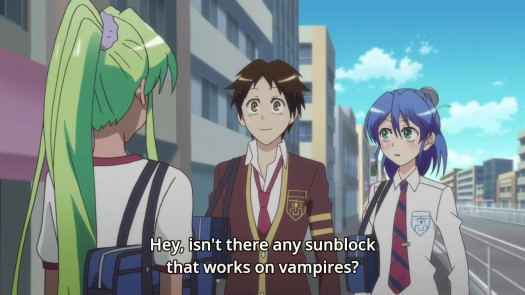 However not every character delivers with laughs. Asahi's childhood friend Mikan Akemi (Reina Ueda) attempts to use her Newspaper Club power to spread bad rumors about her fellow classmates, even going so far as torturing students for a scoop. It's not entirely funny how she is, with her actions going so far as being more disturbing than humorous. Even the secret regarding her talking glasses isn't as clever and silly as everyone else's, making her entire existence quite pointless in the world of Actually, I am...

The cast is pretty fun to hear act out everything onscreen, with Hanae and Serizawa playing the roles of Asahi and Yoko with a fun and banter-filled chemistry. Hearing the switch in personality types with Shishido as they switch between male and female is a hoot, with Miya acting all tough and badass and Uchida becoming a magnet for fan-service antics that would be more fitting for that other monster girl anime series currently airing. (More on that in a future piece.) The only miscast here is Ichimichi as Principal Akane, whose voice can get a tad annoying at times even when she throws in a good laugh. 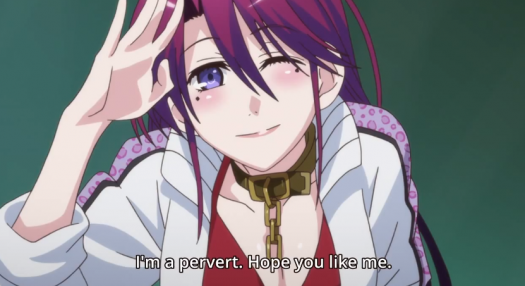 Akito Matsuda's score is mostly a hit, especially when it comes to the more humorous moments of the show. When a serious aspect of the show appears the music can sadly sound a tad bit stereotypical and lacking much empathy. Ars Magna's opener "Himitsu o Chōdai" is quite catchy, but the visuals that are attached to it makes it sound too sitcom-y; closer "Ienai Ienai" by Hilcrchyme is a calming track that works to take a break from the comedy before the show ends with its bonus gag.

Actually, I am... may have its flaws, but in the end the show delivers a high dosage of laughter in each episode. It's weird and stupid enough to fully enjoy with your brain turned off, while at the same time quite clever with dealing with the stereotypical monster movie tropes. While not a full-blown winner, Actually, I am... does cross that romantic comedy finish line somewhere high enough to not be stuck with one of those sad participatory ribbons.

Actually, I am... can be viewed on Crunchyroll. Episodes 1-8 were observed for this review.