A True "Testament" To Bad Smut Smothering A Good Plot 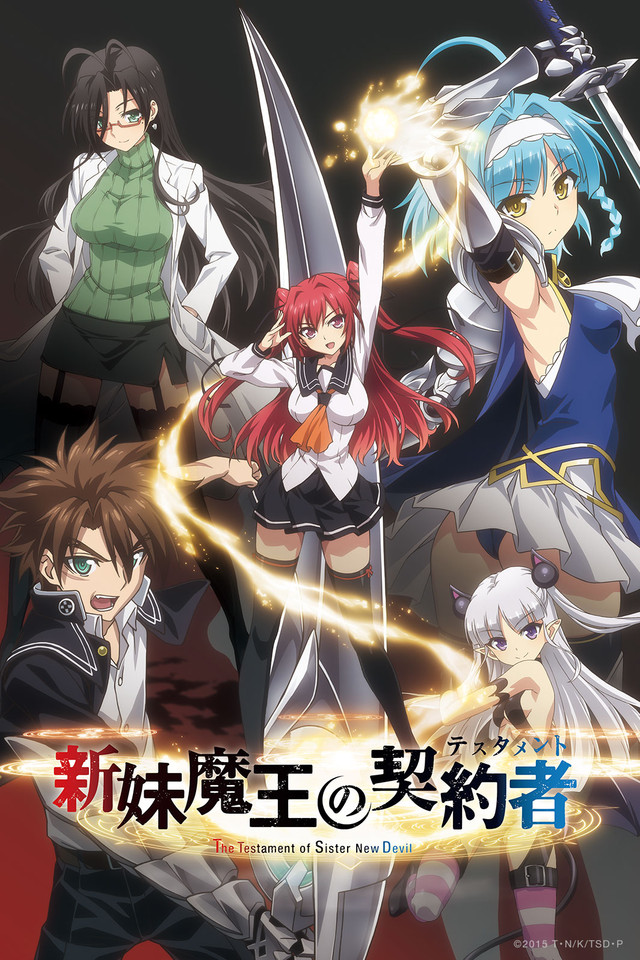 A True "Testament" To Bad Smut Smothering A Good Plot

"...This got a second season?!" These were the words that spat through my brain after sitting through a handful of episodes of The Testament of Sister New Devil. How is it that quality programming like Princess Jellyfish and Barakamon are left hanging without any sign of a second season, yet something that appeared to be a show filled to its brim with perverted fan-service is given another go-around?

The Testament of Sister New Devil follows Basara (Yūichi Nakamura), whose father Jin (Keiji Fujiwara) tells him that he will have two new stepsisters entering his life: Mio (Ayaka Asai) and Maria (Kaori Fukuhara). When Jin leaves for a business trip, Basara is left in charge, where it is soon discovered that Mio and Maria are really a demon princess and succubus respectively. Thinking that he is just a mere human Mio asks Basara to leave. 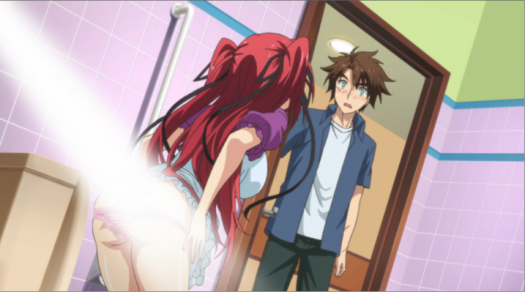 The joke turns out to be on them, as Basara reveals that he and his father are exiled members of a hero clan village. After saving them from death Basara takes on the role of Mio and Maria's protector instead of their enemy. Basara soon forges a pact with Mio with a magical contract, with the setup of Mio being somewhat the master and Basara being the servant. However Maria pulls a fast one and has the roles reversed. Mio soon discovers that if she acts disloyal to Basara, she gets penalized in a very promiscuous manner.

At first the premise sounds pretty good. I love the fact that Basara is more than just a regular joe stuck with two new stepsisters, with him actually being a strong fighter and protector towards the two female leads. Normally it's just some guy getting stuck with two out-of-the-ordinary girls, with him getting the brunt of the trauma; this still happens from time-to-time with Basara, but it's not like he's a weakling that can't take what's coming to him. 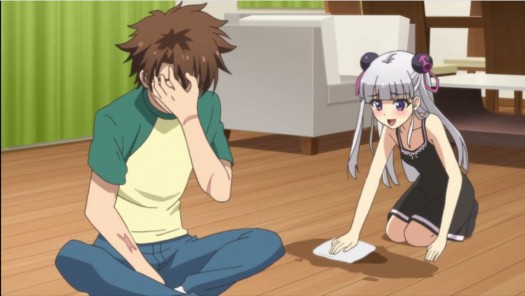 Sadly this anime suffers from what I like to call "Queen's Blade syndrome," which is when a series is given a really good plotline but then succumbs to some really, really bad fan-service. I mentioned above about what happens if Mio goes against Basara, but not what the punishment entails. There's no safe-for-work way to go around this description: Mio basically starts to get really stimulated, and the only way for this feeling to go away is for Basara to touch her until this punishment is "released."

Look, I'm just gonna go out and say it: The Testament of Sister New Devil is but a mere degree shy of being a full-blown hentai. These scenes -- along with other scenarios involving Maria and Basara's classmate and former hero clan ally Yuki (Sarah Emi Bridcutt) -- are pretty graphic for a TV series, so much so that half of each episode is filled with magic rays of light, strange clouds of fog, and other forms of censorship that make this show even more unwatchable than it already is. The jerks who made this, of course, are counting on 2D fanatics to buy the uncut Blu-Ray versions so they can enjoy all the steamy stuff without, well, all that steam covering everything up. 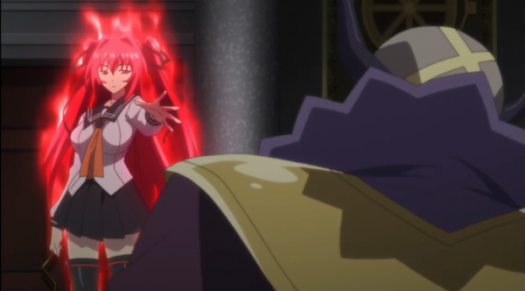 The really sad part about all this is there could be so much done to make this anime better. Surprisingly it has some pretty good battle sequences in a few episodes, and while it doesn't have the best animation I can appreciate the attention to detail that Production IMS put into on Basara's behalf with his body being covered by the scars of past fights. Normally you see the protagonist have the smoothest of skin and the peak perfection of health, so it's a nice change of pace seeing something like that.

Its voice cast does an okay job in their roles, but only Fukuhara seems to be enjoying it the most as Maria. She sounds like she knew exactly what she signed up for, and decided to go for broke on the levels of pervertedness of this Lolita character. Perhaps the saddest thing about this show has to be its generic soundtrack, which was composed by Yasuharu Takanashi. There's none of the flash and personality heard in his scores for Fairy Tail or New Fist of the North Star. Instead it's but a half-assed attempt at battle songs and melodies for comedic misunderstanding bits. (Perhaps he looked at this project and saw it as just another paycheck.)

The Testament of Sister New Devil is just flat-out terrible, with its one-dimensional characters and blatant pandering to those who would rather have fan-service instead of a well-serviced plot. Please do yourselves a favor and skip this stink pile and direct your gaze at something that won't hurt your appreciation of the arts as much, like one of Eddie Murphy's recent works or a reality TV series about rednecks making duck calls. Your brain cells won't die as fast watching these as they will with The Testament of Sister New Devil.

Seriously, a second season is coming of this?!

The Testament of Sister New Devil can be viewed on Crunchyroll