"Vegas" On Broadway Hits The Jackpot 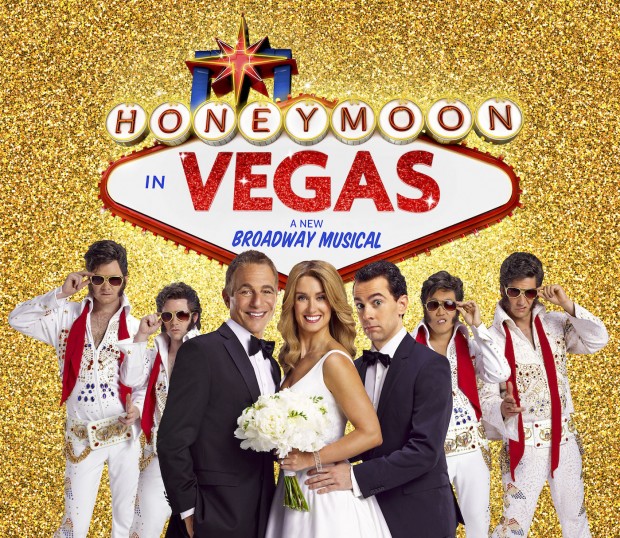 It was 1992 when Honeymoon in Vegas hit the big screen. A well-rounded comedy featuring the talents of Nicholas Cage and James Caan the film acted as a fine fun house mirror directed towards Sin City, not to mention became a career stepping stone for a young lad named Bruno Mars. Two decades later the tale of a well-played hand gone wrong is being retold, this time at the Nederlander Theatre on Broadway.

Yes, it's true that the theater realm has been overrun by these screen-to-stage adaptations. Some have been memorable (Spamalot, Once, Evil Dead: The Musical), others not-so-much (The Wedding Singer, Shrek, all those Sailor Moon musicals). Good news, though: Honeymoon in Vegas is a high-stakes winner, and perhaps the finest musical adaptation since The Producers. 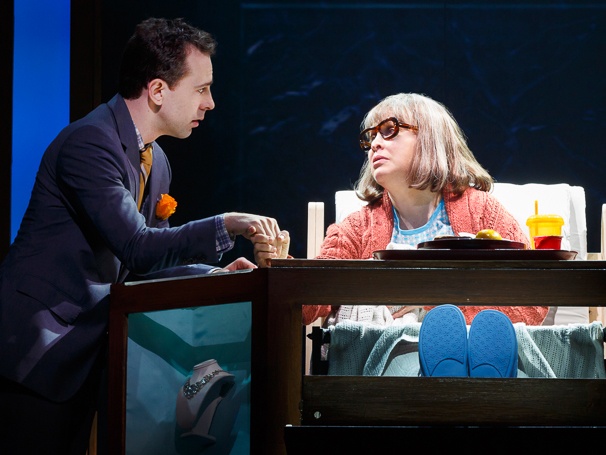 The story goes as such: Jack (Rob McClure) is in love with Betsy (Brynn O'Malley), and wants to marry her. Unfortunately his long-dead mother (Nancy Opel) placed a curse on him decreeing that he must never wed, to the point that her unannounced appearances throws him into a panic attack. Throwing caution to the wind Jack decides to take Betsy away from it all to Las Vegas to go for the full commitment.

Enter Tommy Korman (Tony Danza), a rich con artist still hurting from the loss of his wife. A first glance of Betsy fills up his emotions, as Jack's bride-to-be is a striking image of his beloved. Tommy's gears start turning, conjuring up an idea to win her from Jack: trick the poor sap into a poker game and take everything from him. Jack becomes over-confident and bets it all with his virtually unbeatable hand, only for Tommy to play one more over him. Out of options Jack and Tommy come to an agreement: Tommy will spend the weekend with Betsy, and Jack won't have to pay a cent. 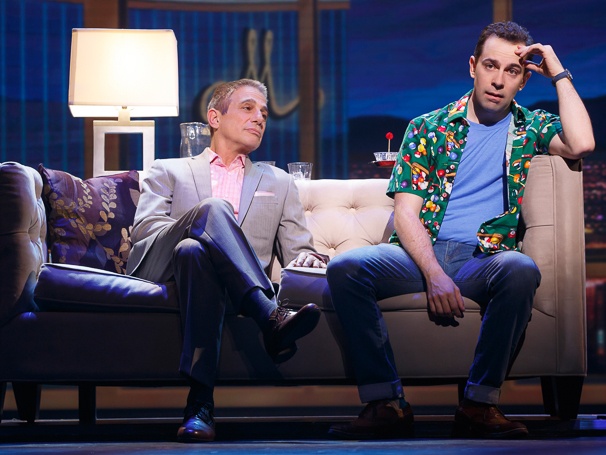 McClure plays Jack with the right amount of sap and heart. You feel bad that he can't seem to escape his mother's unfair curse, but at the same time you wish you could slap some sense into his cowardly body. O'Malley's Betsy isn't portrayed as some princess trapped in a metaphorical castle. Rather she brings the character to the table filled with relatable conflict and attitude. Her needs are understandable, especially when she feels trapped in a relationship that's had speed bump after speed bump, and thankfully O'Malley fits the role by playing her not just as another victim of love, but as a pretty fool who's as gullible as her doofus boyfriend.

When Tony Danza hits the stage as Tommy, you cannot help but smile. He sings, tap dances, and even plays the ukulele with all his heart, returning the favor with probably one of this year's best stage performances. You may laugh, but Danza shows his real acting chops here on the Broadway stage, thanks in part to Tommy's Dean Martin swagger and Sammy Davis Jr.'s dancing shoes. 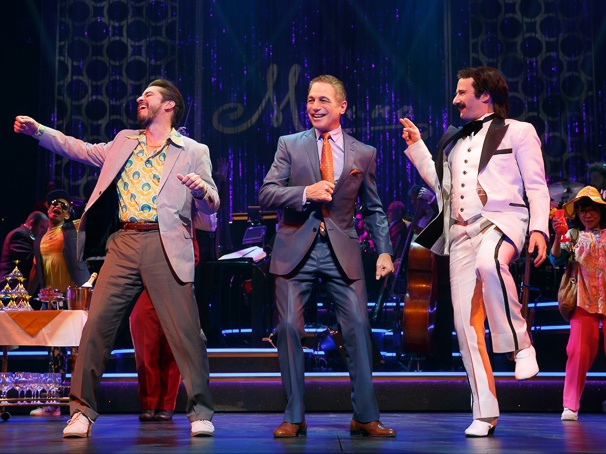 If there was one person in Honeymoon in Vegas that deserves the title of showstopper, it's David Josefsberg, taking on two Vegas-influenced characters with incredible glee. The first is Buddy Rocky, a blend of Wayne Newton and Tony Clifton whose morning breath probably reeks of the previous night's mistakes and gambles. It's when he takes on the role of Elvis impersonator Roy Bacon when the true spirit of Vegas fills the theater. He's got the voice, the moves, the attitude, and the godly mythos that the real Presley contained on stage & screen.

Adapted for the stage by the film's screenwriter Andrew Bergman, Honeymoon in Vegas gets the Broadway treatment that helps surpass its original source both comedically and storytelling-wise. It's a tale of two jerks and the woman who needs to move onto the next step in her life. Both Jack and Tommy have their likable (and unlikable) qualities, but it what they decide upon that characterizes them in the long run. Betsy, on the other hand, is written as quite the innocent (and gullible) type, and although you know she could probably do better for herself you can't help but hope she makes it to the altar with either of these bozos. 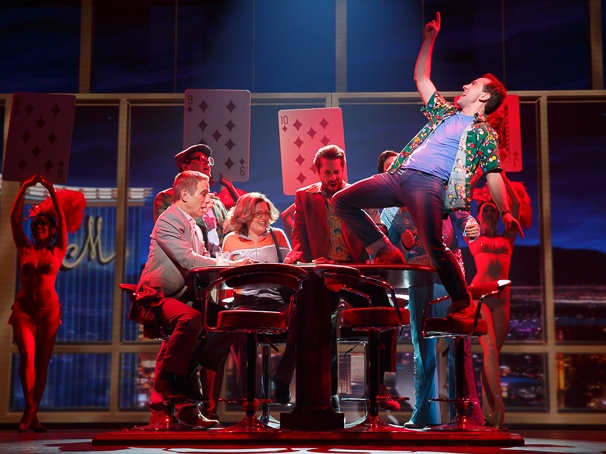 Of course a good book needs to pair itself up with an equally-good soundtrack, of which is found thanks to Jason Robert Brown. It's the sort of musical style that calls back to the limelight of the 40s and 50s, with a jazzy swing and a poppy melody. You can easily tell that conductor Tom Murray is having a ball when he and the orchestra are bouncing along to the beat, not to mention the fun expressions coming off of drummer Jamie Eblen as he plays away in a style worthy of a page in Tony Bennett's catalogue.

The lyrics are thankfully catchy, with some of the funniest and -- dare I say -- heartwarming songs you'll find on Broadway this year. Opel's performance during "Never Get Married" is one of the funniest musical moments since Spamalot had a number about needing Jews for a successful show, but it's when the Flying Elvises hit the stage for "Higher Love" when you realizing you're witnessing the true musical moment of the year. (Hell, who knew a song about skin cancer could be performed so straight-faced and cleverly in "Out of the Sun"?) The finest warmth the show offers can be found in the Tommy/Betsy duet "You Made the Wait Worthwhile," a song I'm sure will be played at many a future wedding reception. 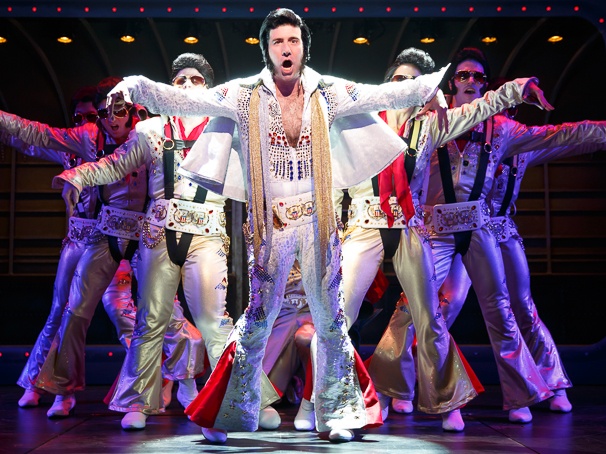 Lastly a lot of credit for Honeymoon in Vegas's presentation should be given to Anna Louizos, who designed the scenery and sets in a way that captures the hustle-and-bustle of New York and Vegas without its real-life clutter, not to mention the calm serenity of Hawaii. It's flashy, but thankfully it doesn't distract you from Denis Jones's fine choreography and Gary Griffin's terrific direction.

While I thought it was going to be just another screen-to-stage adaptation, I walked out of this production with the biggest smile, humming the songs and chuckling like a gaggle of Elvises. It may have some tough competition this year, but don't be surprised if you see this show walk away with a few Tonys, thanks to its stellar cast, memorable soundtrack, and silly storytelling. Honeymoon in Vegas is the kind of stage spectacle that Broadway has needed for the longest time: one that makes you feel good going into it and having you leave in a wonderfully euphoric state. In laymen's terms: bet it all and set a date for this Honeymoon as soon as possible.

Honeymoon in Vegas is currently playing at the Nederlander Theatre at 208 W. 41st St. in New York, NY. In previews, with the official opening date on January 15th. Click here for tickets!