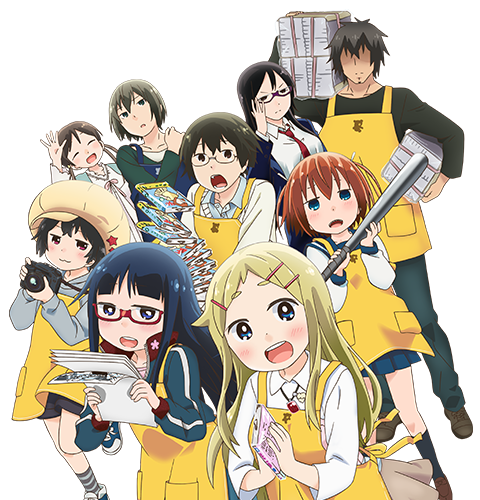 Any lover of comics would dream of working at a place like Jay & Silent Bob's Secret Stash or Comicopia. After all from watching something like Comic Book Men it would appear it'd be the geek life of luxury. However a new anime series called Denki-gai no Hon'ya-san shows off another side of the comic store worker, one filled with deadlines, overnight stocking, and the inevitable visit from the censors bureau. Fortunately it's all done with a nicely humorous technique.

Denki-gai focuses on the workers over at Umanohone (based off the real comic shop Toranoana), which specializes mainly on self-published manga series called dojinshis. The employees are a mixed bunch of rapscallions, from the determined writer Sensei and the zombie-obsessed Fu Girl to the manga guru Sommelier and the photographer enthusiast Kameko. While there is not that much of an underlying premise to the show Denki-gai puts its main focus on the characters and how they evolve as time marches on. 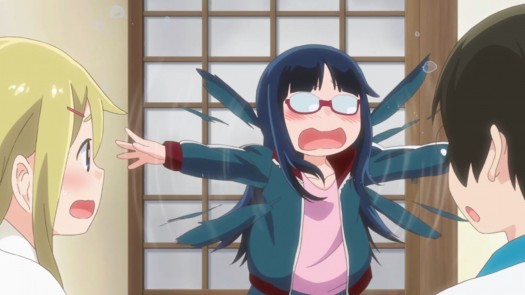 Much of the humor focuses on the flaws of these characters, all of which are done in a way that never grows tiresome. Whenever Sensei is working on her next manga submission, it leads to a downward spiral that sends her into an infant-like frenzy. Seeing Fu Girl beat up employee (and normal guy) Umio after being talked into dressing like one of the undead is always worthy of a laugh, not because of the act itself but because how brutally violent the scenes are. Even Hiotan's shyness doesn't get boring, especially after you discover she's a hardcore yaoi fan (and I do mean "hardcore" in the context you're probably thinking of).

It difficult to truly describe why this show works as well as it does. Many plotlines seen here have been done before by other series, from the contactually-obligated Valentine's Day scenario where the girl fails at making chocolates to the inevitable hot springs visit. Perhaps it's the way it's presented here that gives these scenarios a fresh coat of paint. For example when Sensei botches up at making chocolates the rest of the girls in the show jump into a cooking segment that you'd find on some Rachel Ray program, with the end result blowing up in the faces of everyone. At times it's merely the show's dialogue that makes Denki-gai shine the brightest, which is presented in a very slice-of-life fashion with an added jab or two to boost up the humor. 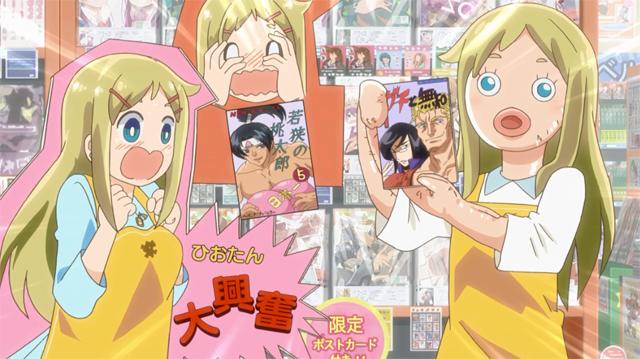 Shin-Ei Animation, who is also responsible for the popular Doraemon and Crayon Shin-chan series, does a fine job bringing everything to life. What they do best is show the more humorous reactions of the characters. One great moment involves a plotline where Sensei and the rest of the workers are trying to help her submit her next work in time, and with only minutes to spare the final page of the work is ruined by an ink spill. Everyone starts bawling their eyes out, until Umio begins shedding tears of his own, which makes the rest of the workers realize how stupid they look while sobbing. The facial expressions plus its comedic timing make it one of the silliest moments Denkigai has to offer.

Hiroshi Takaki's score is ever-so fitting with what happens on the screen. Surprisingly it's when the music is but a mere piano playing jazz-styled when Takaki's work is at its peak. It brings to mind something from a Woody Allen film, or even an episode of Louie, and whenever these songs play it helps boost either the humor or the drama that's occurring at that very moment. Opening theme "Kajirikake no Ringo" by Ayane Taketatsu (who also voices Fu Girl) is a good song that sounds like the spirit of the series, but those who are confused by the meaning of the apples shown in OP may need to look up its translation to know its meaning. The female cast performs the end theme "two-dimension's Love," which also fits with the mentality of those who have a waifu/husbando of their own (which, to be fair, is just about everyone). 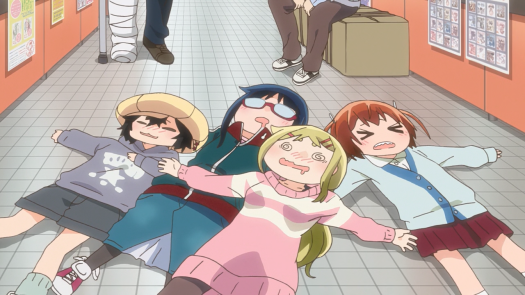 Lastly there is the voice cast, all of whom do a fine job with bringing their characters to life. Minami Tsuda's Sensei balances out both the hard-working side of the aspiring mangaka while performing her nervous breakdowns with a resounding glee. Taketatsu's Fu Girl is done with a stereotypical moé style, which breaks into a silly psychotic mentality when she goes into zombie-killing mode. Meanwhile Takahiro Tomita's Sommelier barely ever speak, instead using grunts and hums to show his emotion in a way that's reminiscent of Vin Diesel's Groot in Guardians of the Galaxy.

Denki-gai no Hon'ya-san may not be the breakout slice-of-life anime comedy of the year, but it's still a great series to jump into and watch its events unfold. With a good amount of laughs, a sprinkle of drama, and a lovable cast Denki-gai is a series that should be on any comedy fan's must-watch list. It may undo your fantasy life of working at a comic book store, but at least it's all done in a way that'll leave a smile on your face.

Denki-gai no Hon'ya-san can be viewed on Crunchyroll, and has been licensed by Ponycan USA