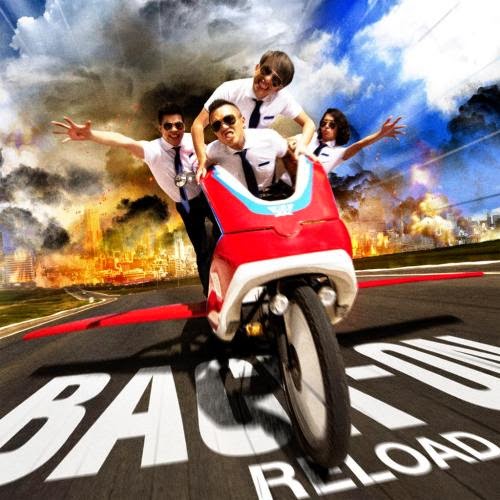 The era of rap-rock that brought us Papa Roach and Limp Bizkit left us far too long ago, pushed out by the likes of the Strokes, the White Stripes, and the Hives. Someone apparently didn't give that memo to Japanese band BACK-ON, who in their twelfth year in the music business have just released their fourth album Reload. The real surprise, though, is that it shows why this genre maybe should've stayed put.

Gundam fans will be quick to recognize one-fourth of the tracks featured on Reload. The techno-infused "Infinity," first heard in the video game Gundam Breaker, will induce rampant hand-clapping as singer/rhythm guitarist Kenji03 belts his heart out as rapper Teeda slashes rhymes like an AMX-109 Kapool. The two theme songs from Gundam Build Fighters are also on-hand. Opening track "Nibun no Ichi" is your standard J-POP fare, and while the melody is decent it doesn't quite grab the listeners' attention as the first song off an album should. "Wimp," however, benefits from having gust vocalist Lil' Fang (from the up-and-coming group FAKY) in tow. She and Kenji03 feed off each other's energy, as Teeda circles around them with verbal intensity.

The majority of BACK-ON's latest focuses more on having a good time rather than try to relay a message or keep an eye on the wrongs of the world (unlike a certain group's recent outing). "Around The World" lets the band soar just by simply letting loose and rocking out, breaking in a good couple rap verses to add a golden slickness to their attitude. Recent Fairy Tail theme "Strike Back" has the band yearning for adventure, as the lyrics fit in nicely with the temperament of the anime's protagonists. The band also shows it can tone things down a bit with "Life Rolls On," giving off a positive vibe that will certainly lift the heads of those in need of an inspired pick-me-up.

BACK-ON may not be as in-your-face as most of the rap-rock groups of yesteryear, but the quartet would rather have fun in their songs instead of spit in the faces of their respective fans. Perhaps this is why Reload strides to be a more enthusiastic album, one that may be a tad bumpy in a few places but still tight enough to blend it with than anything else from that bygone era. In a way BACK-ON has shown that, while a certain music style may not have the following it once was, it can still churn out a good record for anyone looking to rock out like the good years of the Family Values Tour.