Last week on ESH's EGMNOW site I reviewed ACE Team's Abyss Odyssey, which made me think back to one of their earlier games. Back in 2011 I wrote a piece for it for the now-defunct ElectricSistaHood magazine, which never got published. I figured that instead of letting it collect dust, I'd share it with everyone. Hope you enjoy it. I may do more of these retro reviews in the near-future.

Poor King Sisyphus. After spending thousands of years being forced to roll a large boulder up and down a hill, isn’t it about time we let the poor old fool catch a break? The folks at Atlus and ACE Team believe he does, as is evident in the their latest title Rock of Ages.

Fed up with his cruel and unusual punishment Sisyphus escapes from his prison in Hades and sets out into the world, squashing all dare stand in his path. Traveling through the periods of Ancient Greek, Medieval, Renaissance, Rococo and Goya our anti-hero goes rock on with some of history’s greatest masterminds such as Plato, Charlemagne, da Vinci, Justinian and Leonidas. While going head-to-head with these geniuses of their time players will have to evade various traps that consist of animals, explosions and tall buildings that will keep their rock from reaching the bottom; players will also have to set traps to protect Sisyphus from being squashed himself. 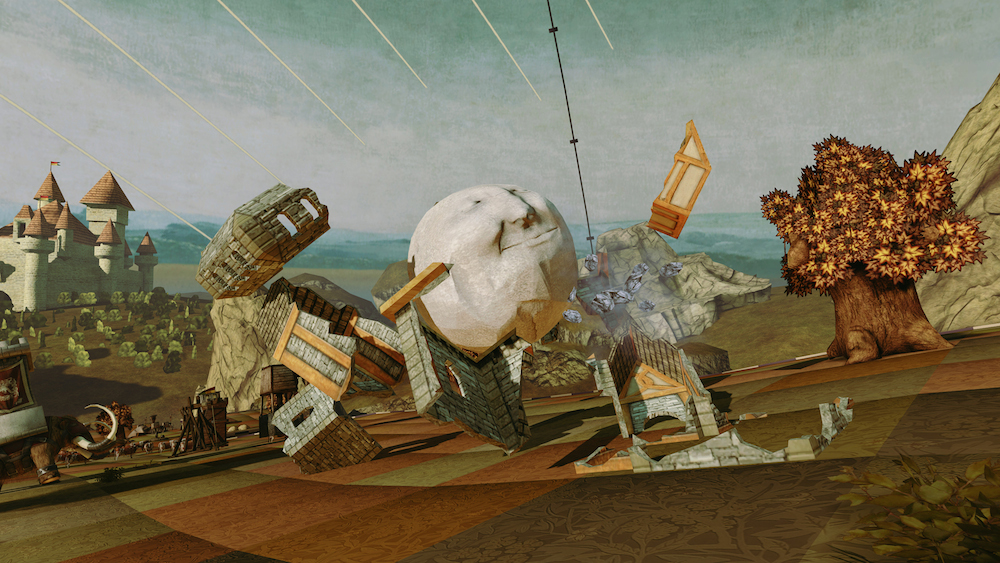 Gamers maneuver their boulder using the control stick, which also helps to speed or slow down your giant rock. In order to either evade or squash any obstacle players will have to speed up their rock and push the jump button at the right time, sailing over any hazard or squashing it to keep it from hindering you again. Destroying these objects help players earn cash to purchase their own weapons and obstacles to keep their opponent from reaching their goal; stronger boulders with different abilities can also be acquired for the right price. The faster you roll down the hill, the more damage you give off to the door at the end of the level. Once the door is smashed you’ll be able to enter the opponent’s protective area and flatten them like a pancake.

The overall appearance of Rock of Ages rings near the stylistic realm of renowned director Terry Gilliam, whose cartoons were a highlight in the Monty Python TV series and movies. Each world seems to have jumped right off the canvas of a Renaissance painting, which helps greatly with the silliest aspects of the game. You cannot talk about Rock of Ages without mentioning the soundtrack in the game, which is filled to the brim with lunacy and cheery goofiness. Imagine the most epic of music playing in the background to the noises of whiny folks being smashed, or the shrieks of a pansy as he is about to be mushed by a rock not with a crunch but rather a wet fart. Parodies of The Lord of the Rings, 300 and The Matrix will be found in the main Story Mode, featuring visual gags so funny that your sides will ache from laughing too hard. 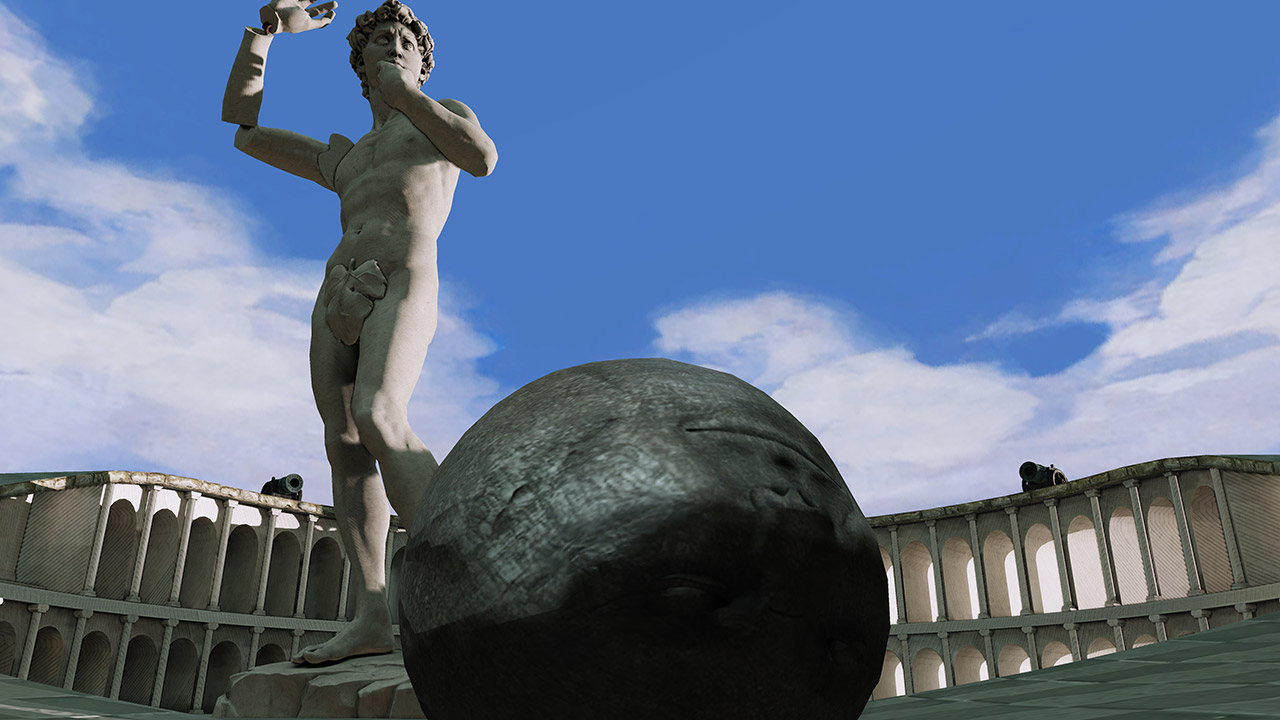 If Rock of Ages does suffer from something it’s this: the difficulty ranks at the easiest of settings. Near the Middle Ages section of the game it looks as if the levels will spike with difficulty, only to fall right back down by the time you reach the end of that section. Boss battles with the likes of a dragon and a cannon-totting Statue of David don’t even offer much of a challenge, though they can be quite frustrating at times. Because of this the main Story Mode can be beaten within a few hours, and while some levels might need to be unlocked via collecting hidden keys throughout the levels players can easily just go back to them, snag the keys and exit the levels after the fact.

Despite the short run time for Rock of Ages its multiplayer aspects will keep players coming back for more. In either split-screen mode or battling online players can go head-to-head in two modes: War and SkeeBoulder. The former will have the two players go against one another on a race against time to squash each other, while at the same time protecting each other’s boundaries. SkeeBoulder, on the other hand, will have the two players racing down the hill for points and multiplier bonuses, which will also give them cravings for arcade tickets and some really bad pizza. 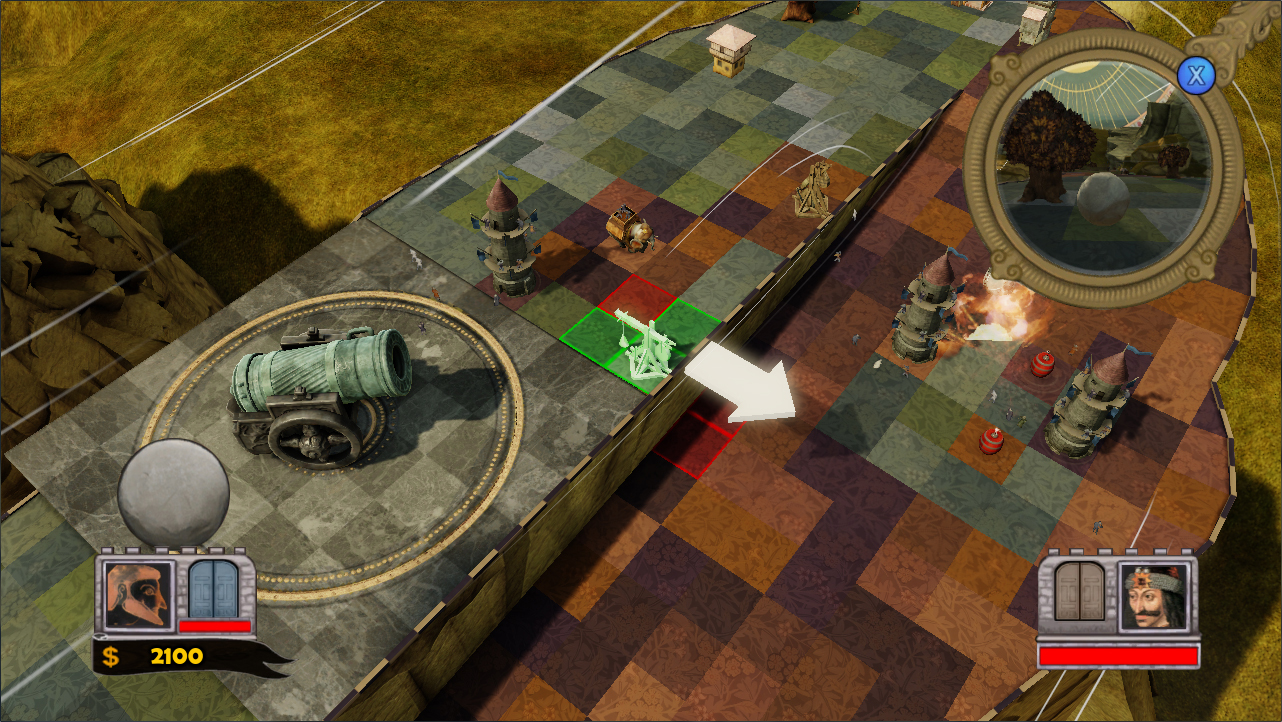 Rock of Ages is a title filled with many chuckles, a great Pythonesque look and a fair amount of challenging gameplay, and while its short length might turn some gamers off its avid replay value makes it a game worth playing over and over again. As there are millions of ways to set up protection around your section of the level you’ll be able to creating various strategies to take down your opponent and roll in victoriously with a hilarious splat. If you’re in need of a fun game that will fill your belly with laughter, then Rock of Ages just might be the title you’re looking for.