In the 80s and 90s the American film landscape was filled to the brim with violently awesome action flicks, starring the Norrises, the Schwarzeneggers, the Van Dammes, and the Stallones of the acting world. These films had a similar premise: an evil organization, either homegrown or foreign, wants to destroy the world, and only one man can stop them all. In Free Lives upcoming side-scroller shoot-em-up Broforce players will be given the opportunity to take control of not just one of these super action heroes, but all of them! Needless to say our supply of Whoop Ass Cans are going to be nicely stocked. 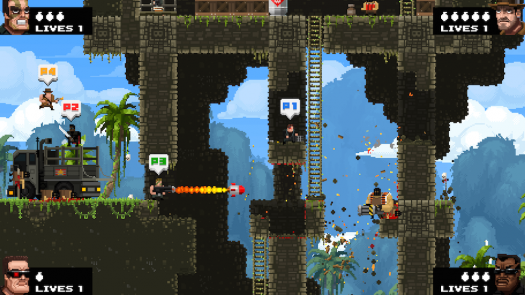 At PAX East this year I was given the chance to play the first few levels of Broforce, along with three other lucky soldiers of fortune wanting to save the world for truth, justice, and the sweet smell of napalm. The name of the game is simple: stab, shoot, slice, and/or blow up every other character that is out to get you. You are given one bro version of a famous action hero/actor to start out with (i.e.: Rambro, B.A. Broracus, Bro Dredd, Brominator, etc...), and it is up to you to rid the level of unnecessary evil. You start off with one life, but throughout the level you have the chance to rescue your fellow bros, giving you extra men to help take on the terrorists.

Broforce literally pushes your guys right off the copter into danger, so you do what should come naturally: shoot everything in sight! It gets incredibly bloody fast, but in a hilariously fun way. Watching these members of an unnamed evil organization get gunned down, have their heads popped off, or even burn to death brought out a much-needed maniacal laugh out of this reviewer. Not only can you deliver some justified damage to the bad guys, but also the environments, which will lead you to some pretty creative kills. (In one instance I shot up the ground underneath a heavy statue, which came crashing down onto a future terrorist pancake.) 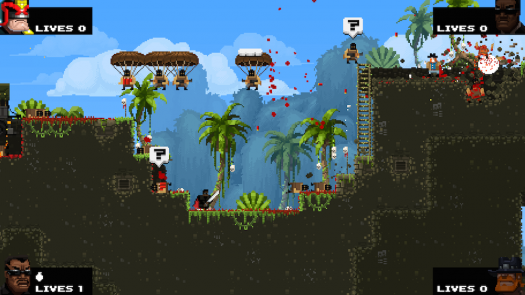 Towards the end of our demo my three guys came across the first boss battle in the game, a super helicopter that shot bullets, missiles, and napalm onto us. It was getting incredibly close for all of us players, and it came down to my last man: the Brommando. Launching my missiles as hard and fast as I could I watched that evil war machine plummet down to the ground in a fiery explosion. It's a great moment in gaming, nicely tapped off with a raising of an American flag as you get to your chopper.

After finishing the five-leveled demo of Broforce the initial feeling the four of us had after we placed our controllers down was unanimous: we wanted more of this game. The gameplay was fun all throughout, its 8-bit look captures the spirit of the era it parodies well, and it controls like a dynamite-fueled dream. In short: if this is what Broforce delivers in its full game, then Free Lives can expect plenty of dazed smiles and joyful fist pumps from the gaming community for what they are bringing.

Currently Broforce is available through Steam Early Access for PC and Mac. Normally I wouldn't recommend getting a game that is still early in development, but for once I can confidentially say this: jump into the madness that is Broforce as soon as possible, for the good of the world!