HomeComics/MangaREVIEW | "The Wolf Among Us": Episodes One & Two

REVIEW | "The Wolf Among Us": Episodes One & Two

REVIEW | "The Wolf Among Us": Episodes One & Two

Bill Willingham's Fables comic has had a gigantic following, especially for those who grew up with the fairy tales of yore, so it should come as no surprise that someone out there wanted to adapt the series into another format. There's the film adaptation currently in the works, and while a TV series failed to materialize it did lead towards two other great shows that were greatly influenced by it (Grimm and Once Upon A Time). Leave it to the guys at Telltale Games to spin a delightful web of mystery and shock with their video game adaptation of Fables: The Wolf Among Us.

A prequel to the comic book The Wolf Among Us follows Bigby and Snow White as they investigate the first Fable murder in years. With their boss Ichabod Crane breathing down their necks it's up to them to interrogate everyone they come across in hopes that each stone unturned leads them towards the answers they were looking for. As it is with Telltale Games the game is split into five chapters, two of which have been released thus far. 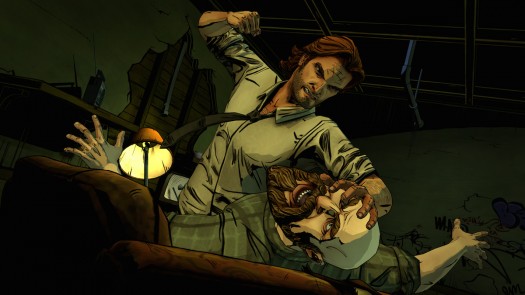 The first two chapters focuses mostly on the whos and whys of the investigation. Who would kill Faith? Why leave her head at Bigby's doorstep? Who would benefit from the death of someone who seemed to be just your average lady of the night? As the mountain of clues is summited, the trail of blood leads down different paths that points the blame at so many characters. Could it have been the Woodsman, who was attacking Faith before being rescued by Bigby; perhaps it was Georgie the strip club owner, who might've stiffed him in a pay cut one too many times; or could it have been someone we've yet come across in this video game?

Like in The Walking Dead what you say and what you choose to do affects the entire landscape of a video game. You can have Bigby play nice and use his words to get answers, or be a brute and have your actions get what you need done. What you decide will cause those around you to either respect or fear you, especially if the claws come out when dealing with those who refuse to cooperate. Your choices may also lead to saving the lives of others, or if you decide to neglect a place over another for the time being it could lead to unnecessary death. 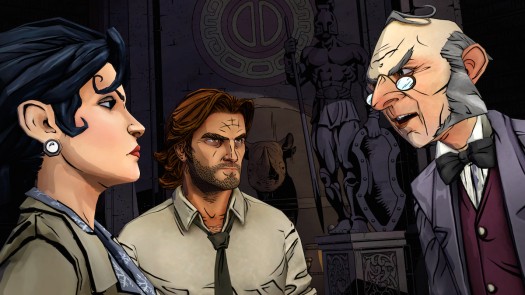 The first episode, "Faith," does a stellar job giving a nice introduction to the world of Fables, which is very good for those who are unfamiliar with the source material (i.e. people like me). You get to know who Bigby is and once was, as well as a brief summary of what brought the likes of Snow White, Belle & the Beast, and Mr. Toad to the real world. However I did find myself looking at my watch during a couple segments, including one involving Bigby and his little piggy roommate, and while it did entertain me it just felt like unnecessary filler.

Episode Two, on the other hand, had me at the edge of my seat. While it's hard trying not to spoil anything, "Smoke & Mirrors" had a few great twists that made me wish the next episode was already out. Let's just say this case may involve someone Bigby works very closely with. There's also some tense moments involving Beast and Georgie, all of which are resolved nicely depending on which route you take. (It could get ugly if you wind up using some muscle, though.) 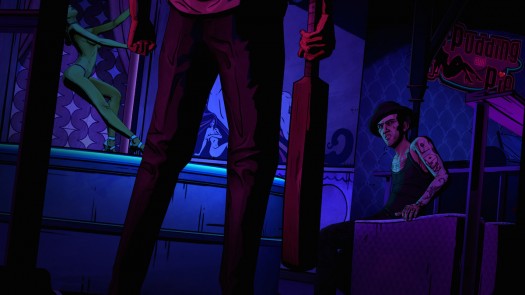 As in most of Telltale's titles the gameplay has a point-and-click aspect to it. Some places you walk around areas, looking for clues or things to interact with, while action sequences depend on some quicktime events. It's a formula that's been working great for Telltale Games, so there's no need to fix something that isn't broken.

This does lead to some of the more familiar issues we've come to see in these episodic titles: its frame rate issues. While I've yet come across a game-breaking bug in any of their titles I find myself holding my breath whenever I see a character pausing mid-word during a scene, or watching a background tiptoe its way into the scenario at hand. Of course this could be because of the many different paths you can take with the story's material, as one thing may load in place of another depending on how one acted a scene or two ago. Still some of these issues could've been easily been hidden behind the loading screen. 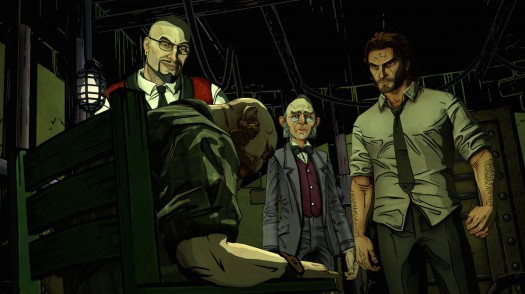 The overall look of The Wolf Among Us is made to look like a comic book come to life, with its dark undertones matching with its noir-like setting. At times I was reminded of Richard Linklater's A Scanner Darkly due to their similar stylization of both the characters and their surroundings. Its score, composed by Jared Emerson-Johnson, is the final piece of the puzzle needed to set each scene's proper mood. Sometimes I even found myself letting the main menu music playing in the background, as its sounds were quite soothing to the ears.

Although the first episode of The Wolf Among Us has some bumps and bruises it's the second episode that has me buckled in for this little ride down a Grimm road. Dare I say, I found myself enjoying it more than The Walking Dead in some areas. Until Episode Three comes along I will be left pondering what is going to happen next for Bigby and Snow.