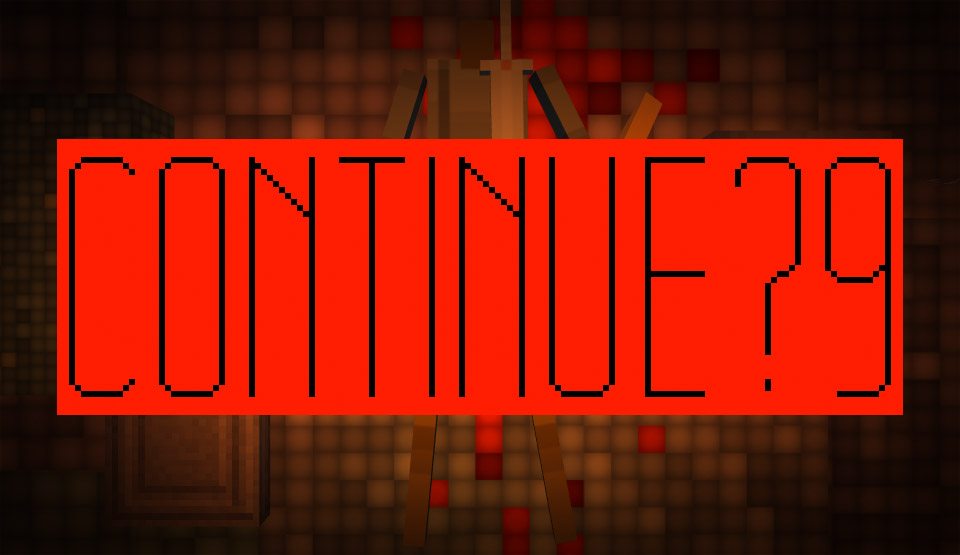 Have you ever wondered what happens to your favorite heroes if you decide to choose "No" on the Continue screen? Where do they go? Is there a Heaven or Hell for them? Are they filled with regrets? These questions have bogged the mind of game designer Jason Oda (Skrillex Quest), who decided to do some game soul-searching and find the answers to both life and death in a virtual setting. The end result is Continue?9876543210, a game that does more for your mind than it does your fingertips.

You start the game off at the end of your character's life. As one of six characters you can play (the choice is given randomly) you are then tasked to go through six out of the eleven areas that appear throughout the Random Access Memory, which acts as sort of a realm between life and death. While roaming through the areas you must speak with others in order to receive lightning (helps to free up blocked areas) and prayers (gives off shelter when hiding from the garbage collector).

Every two levels you must roam the grounds for shelter, as the garbage collector starts striking down homes in order to delete you. If you've said enough prayers you'll have no issue with finding enough cover, but be careful as the more times you lose rounds during in-between battles you may lose homes and be subjected to death. These battles can range from dungeon roaming and boss battles to Space Invaders-inspired shooters. Win these rounds, and you'll be given coin, lightning, and even prayer that will help you on your journey of self-realization.

Continue?9876543210 is not a game where you can go back and reclaim your life; rather it's a title that mirrors the journeys of every person in the universe. Your character is gone for good, and there's no changing it. There will be no more of fulfilling one's quest on Earth; your damsel is eternally in distress; and the beast you've been tasked to slay will go on to live a long, healthy life. The only thing you have left with you are your regrets. You can outrun the garbage collector, but only for a certain amount of time before you must finally be deleted from the mainframe.

It's been awhile since I've seen a title that looks like a wonderfully interpreted third-person perspective of 8-bit gaming. Like a blend of 3D Dot Game Heroes and an M dot Strange film Continue?9876543210 gives way to a realm that's straight out of a childhood nightmare. Fairly simple to play the game uses the WSAD/arrow key plus space bar in order to roam around the hollowed grounds. The storyline is filled to the brim with beautiful poetry and metaphors, many of which may leave you wide-eyed and filled with inspiration, despite some of its bleak wording.

After spending hours playing this game, watching each of the six different characters meeting their final makers, I realized that Continue?9876543210 may be one of the saddest games ever created. You are trying to talk yourself into thinking that there is still so much time, enough to save the girl and complete your mission, only to be forced to see the big picture. You'll sometimes see your character's life flashing before your eyes, thinking back to a lost childhood that perhaps he or she wasn't able to fully enjoy. Now it's too late, and there's no going back.

Continue?9876543210 is probably the type of game that you play late at night when you can't sleep, but the drawback is that what you bear witness to might keep you up even more. It's heartbreaking to watch your character walk this grief-filled path, and may frighten you in ways that not even the likes of any zombie or demon could. Your Final Boss Battle is with Death himself, and like in real-life there's no defeating it. At the very least the further you go in this game, the more fulfilling you'll see your life truly was.

Like a good Nick Cave album Continue?9876543210 drags you into the darkness while droplets of light touch your spirit as you fall further down. With its poetic vibe and bleak outlook this game will have you staring at your ceiling late at night, wondering about those titles you've left unfinished, and how you might've been able to save the heroes in them from being stuck in such a limbo. One thing's for certain, though: you'll probably think twice about leaving a character to die in a game after playing this.