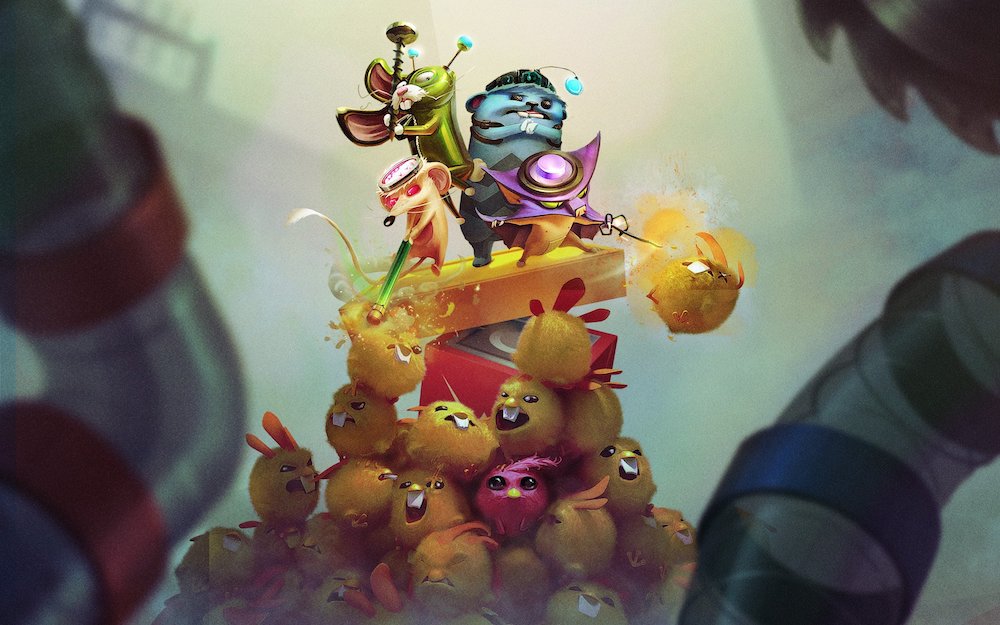 When it comes to multiplayer experiences, people will usually go for the Call of Duty or Battlefield fare, places where it's more about a quick trigger finger rather than a good mind. Spearhead Games has decided that the multiplayer realm is in need of a thinking man's game, hence why they have created Tiny Brains, a four-person puzzler that's as much about using thoughtful tactics as it is about teamwork.

Tiny Brains has you taking control of four animals who have been scientifically given special abilities: a hamster with freezing abilities, a bat that can fling objects, a rabbit who can switch places with other live beings and things, and a mouse who can pull anything towards him. You'll be spending most of your time switching between the four characters in order to solve puzzles, as most of what needs to be figured out requires quick thinking. Fortunately if you have at least one friend playing with you (whether online or in-person) the tasks won't be as hard to grasp.

In the campaign mode you will go through four worlds, all of which involve a scientist who wishes to experiment on you for his own needs. As the game progresses you'll come across a small baby chick who helps you escape and take down the scientist. However all does not appear as they seem, as evident by the amount of backing this little pink chick has.

As the campaign takes only two hours to complete it can be seen more of a tutorial to what really lies ahead: the challenge modes. Here you must solve puzzles quickly, many of which will require at least one person to play with. Trust me when I say that trying to solve the majority of these challenges proved almost impossible when playing solo, so it's best to wait to grab a friend and have them help you along the way.

Some challenges in Tiny Brains will have you attempting to travel as far as you can with a ball before it falls out of play. Pushing it onwards, pulling it upwards, and switching places with the round object before the floor below drops it down a distance best left untraveled. These are possible to complete on your own, although it is a lot more fun (and better time-consuming) playing with others. There's also a fun little soccer mini-game that's good to play when you tire your mind out but still want to have some fun with the little rodents.

There are two other modes that you can tinker around with: one with friends and the other solo. The first, known as Tiny Trolls, will enable Friendly Fire during gameplay, meaning that if you are in the mood to screw around with your pals as they try to solve important puzzles, then this is right down your alley. The other, Jules Mode, is strictly for the best puzzle enthusiasts out there. There you'll play as one character with all the superpowers, but only given one life to complete the game. Believe me: if you spent half your time dying like I did playing the original campaign mode, it's best to probably not even attempt it as it will possibly give you an aneurysm in the process.

The game's cartoonish graphics help to emphasize the humor that you'll come across in Tiny Brains. Watching giant muscular chicken being burnt to a crisp, traumatic flying hamsters congratulating you on a job well done after solving a puzzle, and the loony scientist who is out to pick your brains for the name of science and fame will have you giggling all throughout the game. (The goofy end theme that plays after beating the game will put a nice smile on your face, too.)

Control-wise I was surprised how easy it was to switch characters and use their powers. That being said playing solo rather than with friends will result with your hands conducting a mini-version of Twister later on in the game, especially when you are facing off against wave after wave of evil chickens. You may want to give yourself a chance to get used to playing the game on your own in the easier levels in case you find yourself lacking in-person or online comrades when playing.

Hence why I can only recommend Tiny Brains to those who have friends with PS4s and are willing to give a good puzzler a try. Playing this game solo can be fun, but as a good chunk of the full game requires friendly participation it might not be best to purchase if you don't know anyone who wants to play something like this (especially for its $20 price tag).

For their first title Spearhead Games has made a solid multiplayer experience with Tiny Brains. Great puzzles and good mechanics make this something worthy of any online or offline gaming party. Those who are looking to get their Tiny Brains working alone may find themselves more disappointed with what's given to them. In laymen's terms: get this game only if you've got plenty of pals to pick each others' minds with.