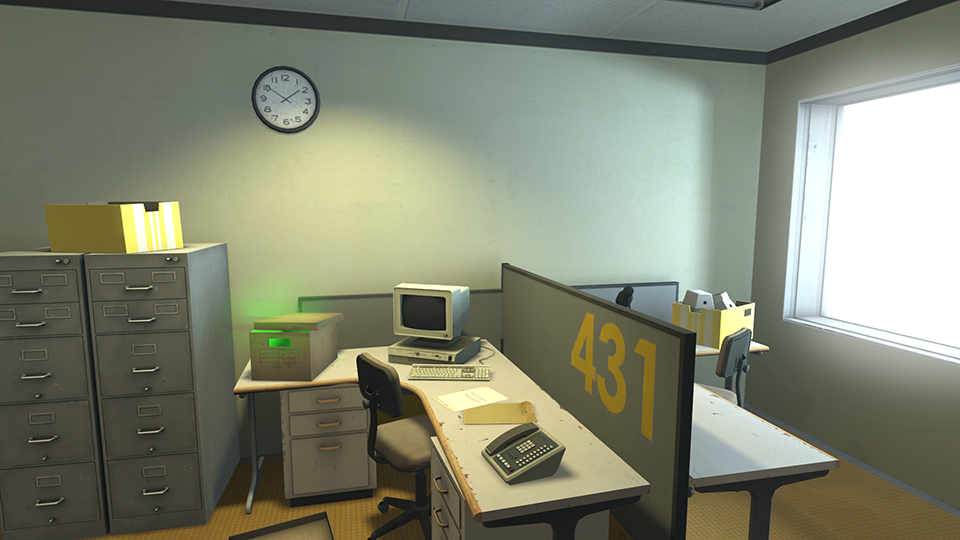 Whenever I played The Stanley Parable, I thought back to that Will Ferrell movie Stranger Than Fiction. When thinking of how Ferrell dealt with what Emma Thompson's narrator was saying, I then started to imagine what would've happened if he did the complete opposite and gone against what Thompson was writing. Would it end badly, or would there be a better, more satisfying ending if you went against the voice in the sky? The Stanley Parable gives you that option, and shows you the repercussions and good that could come out of going against one's narrative.

You play as Stanley, who discovers that not only are his fellow employees missing, but there now is a narrator going about telling what is going to happen next. You can follow what he says, or try to see what happens if you take the route he doesn't want you to take. There are no "villains," per se, but the British voice of reasonable doubt sounds like he has something up his sleeve if you keep on going about what he says you should do. But what happens if you stopped listening to the words of the narrator?

The answer is a gameplay style that's not only unique, but incredibly funny. In some instances going off the path will lead to Stanley's demise; other times you can "accidentally" break the game, causing the narrator to keep restarting the narrative over and over again until he gives up. There are even nods to other games thrown in there, but I cannot spoil the surprises that will be in store for those who play it.

It's hard talking about The Stanley Parable without giving away any juicy tidbits. Originally a mod released back in 2011 created by Davey Wreden the game was soon given the go-ahead for an HD remake thanks to Steam Greenlight. From there he and William Pugh (under the Galactic Cafe developer company) soon transformed the small little mod into something special, something that we, as gamers, have not really seen or heard much of before. In fact, now that I think of it, I don't think there's even another game out there I can compare The Stanley Parable with. It's that original!

The real star of the game is, of course, the narrator, played by Kevan Brighting. At first you are not sure what to think of him. Does he have an ulterior motive behind his task like a certain evil robot? Can you find trust in his voice of reasoning? Is he as suave as his accent may imply? Whoever the narrator really is, he is the most entertaining voice in the sky since Norio Wakamoto in the anime Hayate the Combat Butler!

Trying to complete The Stanley Parable is a bit of a daunting task. With over a dozen or so different endings (one of which will require doing some button-pressing for four hours straight) it's hard to truly pinpoint if and when your time with this game is finished. (Even some of the Achievements in the game will take time, especially one that will take you a whole Tuesday or, even longer, five years!) Not that it matters, though, as The Stanley Parable is a game you wish could go on for the end of time.

The Stanley Parable is fourth-wall breaker's wet dream. While it's not so much of a game as it is an interactive adventure Galactic Cafe have created one of the most tantalizing and brilliant pieces of storytelling to come across a computer screen. If you don't currently own a PC or Mac, then you are missing out on one of the brightest highlights of 2013.

Merry Christmas From The Boston Ba...