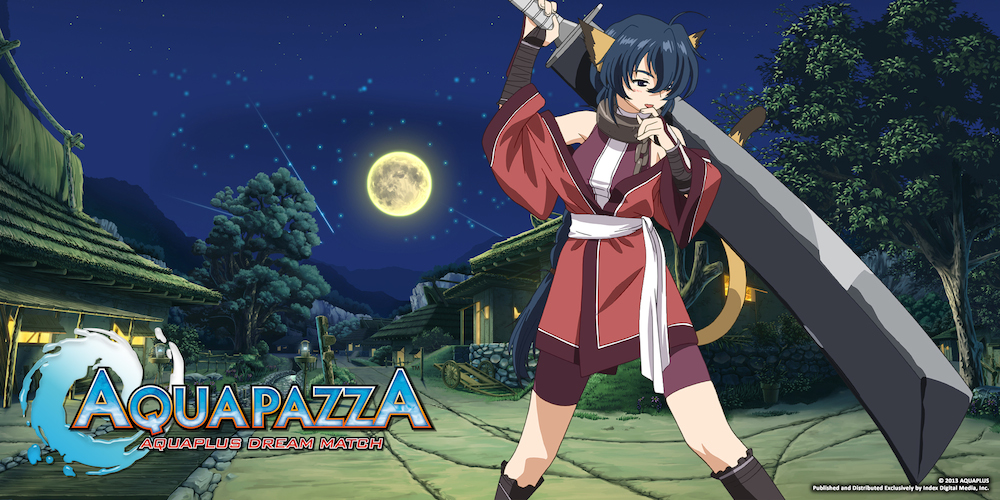 Atlus is taking a fair risk by localizing Aquapazza: Aquaplus Dream Match here in the US. A fighting game featuring lesser-known anime characters (which, in return, were based on even more obscure adult dating-sim games) doesn't seem to scream "financial hit" within the gaming industry, as sad as it is to say. Fortunately that doesn't take away from the fact that Aquapazza is a well-rounded arcade fighter all-in-all.

Aquapazza features characters from the worlds of Utawarerumono, Tears to Tiara, Comic Party, Routes, White Album, Kizuato, and the To Heart series. The Aquapazza itself is a magic liquid that brings all these worlds together, no thanks to the powerful (but very short) witch Ma-ryan. In the first story mode your character must go through eight rounds and take on the other fighters and Ma-ryan in order to set things right with the different worlds. Once you beat the main story mode you are then given the chance to go through a different story, where your character must find a magical mirror said to grant a wish to those who take hold of it.

Fights are set up where you choose one main character and one assistant that can help with their own moves. On some occasions partnering up two characters from the same world will see the two characters banter more back and forth within the storylines. (Pitting two characters from different worlds, though, make their conversations sound more one-sided.) Like in most fighters the more you land a punch or solid block, the more your special meter will fill to pull off bigger maneuvers.

There is a nice uniqueness to the characters you can play as. For example fighting as Morgan from Tears to Tiara will give you the secondary bow-and-arrow weapon, which works well for long range attacks. Playing as Multi from the To Heart series will have you using a mop during battle, which can be used to wet the floor and make it a bit more slippery for your opponent to walk on. Using Manaka from the same series, however, brings quite a sillier fare, as she fights while carrying a large stack of books in her arms that can be used as weapons. (Whoever said reading is fundamental may not have had fighting in mind when saying it.)

As for the partner characters they can be hit-and-miss. Having Mizuki from Comic Party in your corner will giver you her ability to storm in and lay a nice smackdown on your opponent. Both White Album characters, Rina and Yuki, use a snowy technique that sadly can easily be evaded by your enemy, even though they look cool to watch. Sometimes even the more powerful partners like Rathy and Octavia won't be much use if you don't time your summon properly. When they make the hit, it goes a long way; miss entirely, and what would've been a golden opportunity has all but been a waste.

Aquapazza uses the same Taito Type X² system that Arc System's Chaos Code (another well-made fighter that came out this year) had, meaning those who played that game will have problem jumping into this one. Fortunately, with the game's fighting setup, you won't have to worry about tying your fingers in knots trying to land a massive combo and special attack using the DualShock 3 controller. While it may feel more "authentic" using an arcade stick it's absolutely not needed in order to have fun with this game. You can use the Training mode to hone your skills before going into battle, but it's only necessary for those who are new to the fighting genre.

Graphically there hasn't been an anime-based fighter that's looked this good since Skullgirls. Everyone from Utawarerumono's Hakuowlu to Kizuato's Chizuru moves, fights, and jumps in such a fluid motion that it's as if they were hand-drawn for you right there on screen. The background worlds are also filled with life, from Comic Party's convention shenanigans to the colorful academy from To Heart. In fact the only occasion where the graphics were acting weird, oddly enough, were in the character select menu, as the animation started to slow down to a near-crawl.

Outside of the story modes you are also given a few other ways to enjoy the battle realm. Score Attack will have you fighting off enemies to earn a total high score, of which will be uploaded for players to see online. As for the online modes you can take part in either ranked matches or simple player matches. The plus side of doing a ranked match is that your fight can be uploaded for future viewings, in case of a pictures-or-it-didn't-happen scenario lands on your feet.

With thirteen characters and thirteen partners to choose from you can expect to take a good chunk of time unlocking all the individual endings and extras that Aquapazza offers. Not to mention, with plenty of people to battle online you can bet you can get plenty of practice in case the urge to take part in a tournament takes over.

While it may not be as original as Chaos Code, Aquapazza: Aquaplus Dream Match has a lot going for those that are fans of the fighting genre. With a great selection of characters and modes to go through the game is easily worth its $30 price tag (a bargain for something this well-put together). Even though the original dating-sim games may never reach these shores for obvious NSFW reasons Aquapazza has plenty of fun and charm that will entertain both fighting and anime fans for hours upon hours. Now let's hope we can get an anime adaptation of this going...