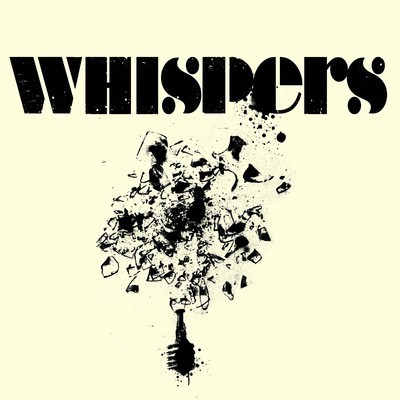 Sometimes we all need to let the wild man take control. Let loose, pierce the adrenaline to the highest degree, and throw any sort of caution so far away that the wind has no real chance at catching up to it. To fully immerse one's self into such a trip, they need the perfect mood-setter. That's what The New Highway Hymnal has done with their debut album Whispers, which was released last October via Vanya Records.

With heavy guitars, a heart-pounding bass, and a loud scream from frontman Hadden Stemp the album starts off with an upward spiral of confusion and fog in "Through Stained Glass." It tosses, it turns, and it nibbles on your ear, all before going into Stooges-like territory with "More." The instruments find themselves clashing with one another, creating a tornado of mental destruction that twists your innards and body with violent glee.

The late 60s/early 70s spirit is strong, especially in "Factory Song." A guy like Andy Warhol would get a kick out of something like this, thanks to the Velvet Underground vibe in Stemp's vocal abilities, although one could imagine the superstar-creator asking for the trio to perhaps turn it down a notch. (Then again, a request like that may have gotten the artist in a world of trouble.) Tracks like "Beach Glass" and "Killer Town," however, plays like a good espionage, with tones that call out to secret agents everywhere and beats pointing towards the direction of the crimes in question.

If one song on the album can be considered a wild man anthem, it's "Out With The Lights." Here Stemp, bassist Amelia Gormley, and drummer Travis Hagan just let it all flow from their brains to their fingertips. The result is an insane ride that breaks the barriers of fantasy and reality, until you can't seem to differentiate one from the other. At that point, who cares about either when you are having this much fun?

In the end, what The New Highway Hymnal has created in their debut album isn't new or revolutionary. Rather they're keeping these styles fresh and the messages still intact for a new generation of listeners to fully engulf themselves in. A new EP is currently in the works from this Haverhill-based band, with a release date sometime later this year. Until that time comes, I suggest diving in headfirst into the beautiful noise that is Whispers.