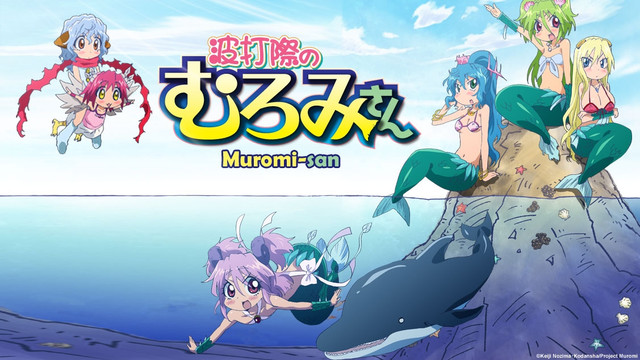 Sometimes we need comedy for the sake of comedy. No real points, no morals or values, and created for the sake of a good laugh. Muromi-san (or Muromi on the Shore) is one such series that falls in this category. Lasting thirteen 12-minute episodes this anime based on the manga by Keiji Najima is the type of show whose sole purpose is to titillate your funny bone, and for the most part it gets the job done.

The comedy follows Muromi, a mermaid who befriends a young angler named Takuro. Muromi looks like a teenager, but in reality is probably as old as the world is. (The same goes for her other sea-friendly pals.) There's not really much of a plot per se, rather each episode is just a day in the life of the mermaids. However it's the complete and utter randomness that happens in each episode that keeps the show entertaining.

As it turns out Muromi and her friends were the cause of many big moments in the world, whether it's the sinking of ships during important battles, Old Testament course-changers, evolution enhancers, and even the things of Greek and Roman mythology. It's how nonchalantly Muromi thinks back to these moments that makes the show work way better than it should. Once the other mermaids and mythical creatures like Harpy and Yeti appear to give their day-in-the-life spiel on the series, too, the comedy gets cranked up.