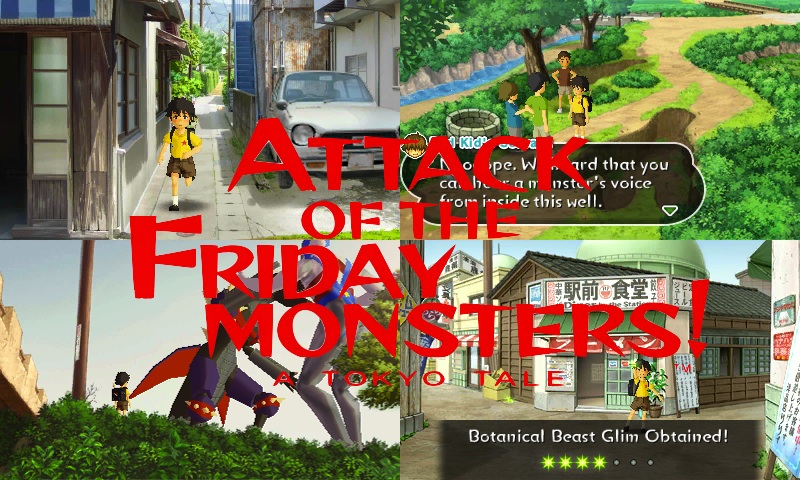 Japanese monsters are making a huge comeback this year, thanks to the likes of the 20th Anniversary of Mighty Morphin Power Rangers and Guillermo del Toro's recent hit Pacific Rim. But when it comes to really bringing back the old-school nods like Godzilla and Ultraman there hasn't really been anything that captures the wacky style of year's past. Fortunately Kaz Ayabe (creator of the Japan-only Boku no Natsuyasumi series) and Millennium Kitchen have made a game that captures the heart and mystery of those Tokusatsu films of yore, in the very lengthy-titled Attack of the Friday Monsters! A Tokyo Tale.

Attack of the Friday Monsters! follows the story of Sohta, a young boy whose family just moved into the neighborhood. They open a dry cleaning shop, which quickly finds itself filled with business, almost to the point where the father cannot handle the tasks. Oh, and every Friday giant monsters attack the city for some strange reason (hence the title).

Players control Sohta as he takes on twenty-five missions, all of which can be completed by chatting with the townsfolk, playing with his new friends, and looking for clues as to why these monsters appear in their small Japanese suburb. Within Attack of the Friday Monsters! is a collectible trading card game known as Monster Cards, which players can collect, combine, and battle with in an effort to become the “boss” of the other children around town. Successfully becoming the "boss" of all the kids in town will unlock secrets that will help find out the truth behind the monsters.