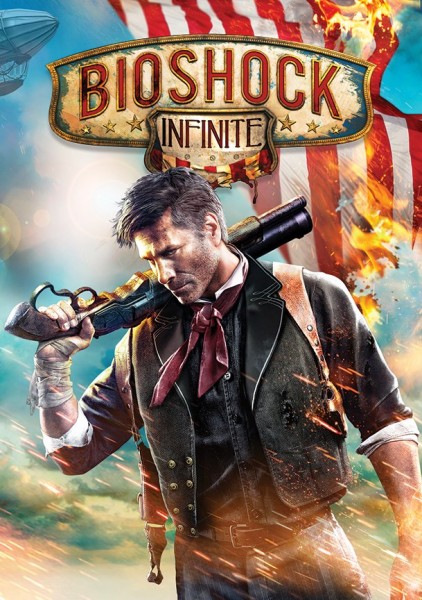 A familiar scene unfolded in the opening moments of BioShock Infinite. One lone lighthouse within a vast ocean, inside a strange kind of transport that leads to a destination that is beyond your wildest dreams. This time around you aren't going down to Rapture; rather, it is the opposite. High above the clouds you soar in a rocket ship, towards what some may claim to be the next-best thing to Heaven: Columbia.

**WARNING: THIS REVIEW MAY CONTAIN SPOILERS**

Once you land your character Booker DeWitt find that the only way in is to be baptized in the name of Father Comstock, the creator of Columbia. You black out for a bit, and soon find yourself outside amongst the gorgeousness of the floating city. Hummingbirds fly around with ease, people smiling and playing games, and a barbershop quartet singing a familiar Beach Boys tune fifty years before Brian Wilson and Tony Asher actually penned it. While the city is worthy to be beheld, you aren't there just to dilly-dally. DeWitt has a mission: bring back the girl Elizabeth, and pay back his debt. 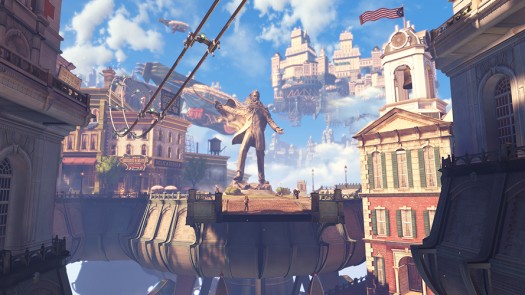 Other than the fact that the city is in the air, nothing seems out of the ordinary in Columbia; that is, until DeWitt starts coming across posters warning people of a False Shepherd. This False Shepherd can apparently be identified by a tattoo on his right hand, the same one DeWitt has. The town's dark side slowly starts to rear itself into the big picture during a raffle, where the winner gets to throw the first pitch towards a tied-up interracial couple. After making the choice whether to throw it at the couple or the carny running the show, your tattoo is discovered, and on starts the fight for your life.

Quickly the town starts turning against you, with cops, soldiers, and believers in Father Comstock trying to kill you at every step of the way. In the beginning you get your first weapons: a pistol and a rail wheel that can be used to soar the Sky-Lines or to melee battle. You battle your way to Monument Island, where Elizabeth is held captive. Once you meet her, the two of you start making your escape, but not without a little interference from Elizabeth's guardian: the Songbird. 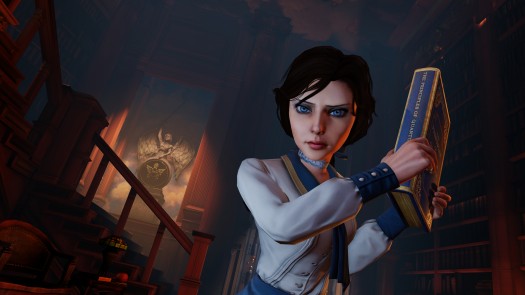 Once Elizabeth officially joins you it starts up a very unique sort of partnership. Early on it is revealed that Elizabeth can take care of herself, so there is no worry about having to protect her. Instead she helps out more: finding money, health, ammo, and Salts for DeWitt's Vigors. On top of all that Elizabeth has the power to use time-space rips to their advantage, whether it's for cover for enemy fire or bringing about automatic cannons and Patriots (giant mechanical versions of Presidents that shoot machine guns) to attack your foes. Oh yeah, and she's a pro with a lock pick.

As BioShock Infinite goes on DeWitt will be able to earn new weapons and Vigors, the latter of which are reminiscent of the special powers seen in the first two games. These Vigors can range from minuscule stuff like taking over enemies to use to your advantage to shooting bolts of lightning and watery tentacles. The weapon variety is huge, too, with small pistols, shotguns, RPGs, and (my personal favorite) hand cannons ready to be used in battle. Much of the game I found myself sticking with the regular weapons, with only using the Vigors mostly during the final third of the game. 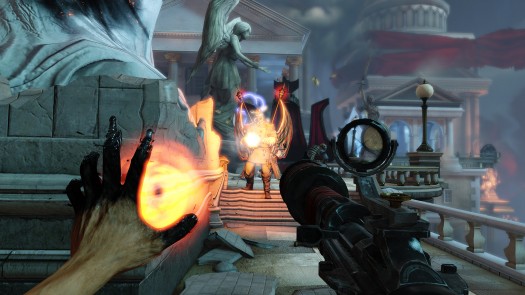 Aiming is still a bit of a pain here, but not as bad as past BioShock titles. You'll get used to it early on in the game, especially when using more powerful weapons like the sniper rifle and hand cannons. Switching through your Vigors are pretty easy, as are implicating the more powerful bursts each one does. Meleeing is also a breeze, and seeing one of the many final blows you can make are wonderfully gruesome to watch.

Enemies come in great shapes and sizes. Most of the time you'll be facing off against regular officers and soldiers, but on occasion you'll be forced to take on Patriots and Handymen (Infinite's equivalent to the Big Daddy). One enemy, however, turns out to be more internal than others. Throughout BioShock Infinite you slowly discover more about DeWitt's past, which had him do unthinkable acts during his time as a soldier. There's also a hidden connection between DeWitt and Elizabeth, but I won't spoil it here. 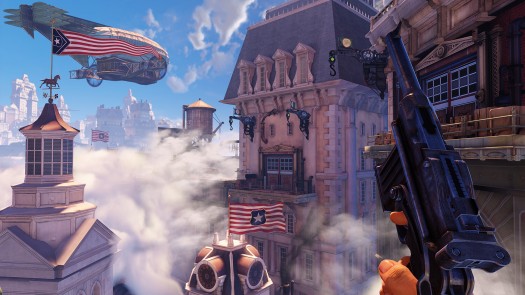 As mentioned the world of Columbia is a marvel to look at, from its town markets and arcades to the oceans and Comstock home. I practically spent the first hour of the game just walking around the city and embracing its beauty. However there soon comes a cloud of racist bigotry that covers the city's little happy times. Bad caricatures of Africans and Asians, not to mention its portray of Native Americans, are showered around the town via posters, games, and museum spaces. It's a dark shadow of Columbia, no doubt, not to mention an in-your-face truth as to how America used to look at and portray minorities in just about every form of media.

There's also a lot of religious connotations, many of which could be inspired (loosely, though) on the likes of Mormonism and Scientology. Presidents are prayed to as if they were saints, and Comstock is seen as a prophet, with Elizabeth the Chosen One. Some may feel uneasy with these sorts of imagery, but in reality it helps to make BioShock Infinite's story much deeper. Whatever religion you are (or even if you are Agnostic or Atheist) there is a mesmerizing aspect to the game's take on how far people will take their beliefs to lower, darker levels. 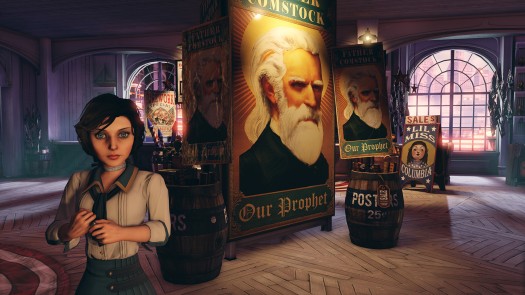 While the steampunk worlds are a marvel to look around at, the same cannot really be said about the characters. The people of Columbia come off more like bizarro Norman Rockwell-meets-Beyond Good & Evil than what is displayed on the game's box art. Sure, Elizabeth and DeWitt look great in the game, but it's more cartoonish than realistic. Although the Unreal Engine is used to its fullest for the game's scenery, it doesn't quite reach those stellar levels for our heroes and villains.

However the voice work of Troy Baker (DeWitt) and Courtnee Draper (Elizabeth) help make the characters seem more real, thanks to the emotional depth put into the voice acting. You feel their connection right at their first meeting, and the more they stay together the better they grow. You can hear the uncomfortableness in Baker's voice when the game pries into DeWitt's past, and when Draper's Elizabeth fears being captured by Songbird more than death itself you can easily imagine the pain she had to go through when she was younger. 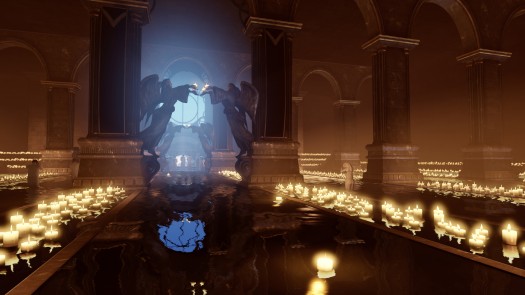 Lastly there is the most perfect element to BioShock Infinite: its soundtrack. Composed by Garry Schyman the music in this game knows how to set the mood, whether it's a light-hearted one at the beach or a dark battle on top of Comstock's massive airship. The usage of licensed songs is somewhat reminiscent of how it was done in Moulin Rouge, with ditties by Credence Clearwater Revival, Tears For Fears, and Cyndi Lauper reworked into melodies more common for the 1910s. Then there's what many will consider to be the game's trademark song: the Christian hymn "Will The Circle Be Unbroken," first beautifully sung by a choir early on in the game, and later on by Draper and Baker acoustically. It's the type of score that encompasses the entity of the game, like a golden artistic barrier that helps the game stand out more from its predecessors.

BioShock Infinite will take you roughly twelve hours to beat, depending on how much time you spend walking around Columbia and finding items. There is plenty to go back to after the game is done, with 80 Voxophones (recordings of characters that give more back story), movies, and even some time rips that hold some clever Easter Eggs. Downloadable content featuring more to the story will also be coming soon, with an option to buy it all with the Season Pass. Considering how great the story came out here, it might actually be worth the $20 to buy it all.

I was initially worried about BioShock Infinite, with some of its gameplay elements being shrouded in mystery due to there being no demos to try out at any gaming convention I can think of. Fortunately those worries were cast aside 30 minutes into my play-through, thanks to its marvelous worlds, its character portrayals, and a story that puts just about any current Hollywood film to shame. Be a Duke and give BioShock Infinite a go, or be a Dimwit and miss out on what might be the current-gen consoles' last hurrah.

Episode CLXXVIII: Destro Gets The...