Another game that I got to go hands-on with at the Boston Festival of Indie Games was called Gimbal Cop from Defective Studios. We had the company's co-founder Jono Forbes walk us though the game, which had a pretty interesting setup.

So you're probably wondering what a Gimbal Cop is. Well I'm still not sure, but this game is so fun to play. I can kind of compare this to a cop chasing after the bad guy in a Mario Kart-like setup in space, except the architect can be your buddy on the other end or someone else. That's right, kiddies: this game is going to be of a WIFI/Bluetooth setup, and also much much more! They presented Gimbal Cop on four different cell phones that were able to link up and play. One person can be the architect making the road, so they can be either good or they can be your worst enemy and make the game really challenging. What I mean by that is they can keep twisting the phone and making the track much harder to catch up with the architect. 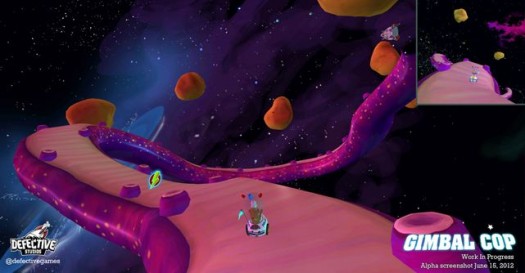 Gimbal Cop is currently a work-in-progress, but the only issue with the game is there's no music to it, but they are working on getting that taken care of. (Hell, we even introduced BR1GHT PR1MATE to them to see if they could help with the music part!) All in all this game is great, even as it's still being worked on. Forbes was great to walk us through the game first-hand, and I personally can't wait to play this game on my phone; whether I'll be having fun creating the tentacled route or chasing after the architect as the cop. Along with that I am looking forward to see what else comes from Defective Studios!

For more information on Gimbal Cop, check out the official Defective Studios website!

While you're here, be sure to check out some of the pics taken at Boston FIG on our Facebook page.