BOSTON FIG 2012 | Father Octopus Hopes To Make It All "Rite"

BOSTON FIG 2012 | Father Octopus Hopes To Make It All "Rite"

Imagine having to deal with multiple dimensions at the same time, with all of them needing to line up equally with one another in order to move onto the next step. That's exactly what Father Octopus has done with its game Rite.

In Rite players solve a various amount of puzzles by using different dimensional versions of themselves. Here's the best way for me to describe its gameplay: first you start off the level regularly with one person. Somewhere in that level there is a lever, and once pulled another dimensional version of yourself appears on the top of the screen. You then have to line up your multiple characters at the doorway at the end of each level in order to move onto the next stage. 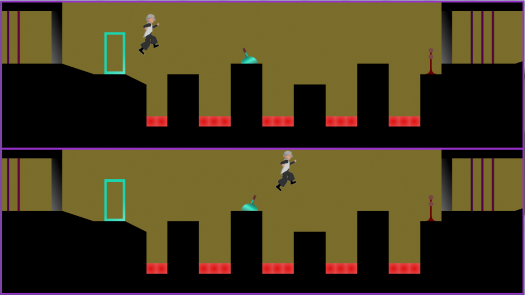 Of course it's not easy to do this in Rite. When you start off the next dimension after pulling the lever the new version of yourself is seen at the beginning of the level, whereas the original you could be in the middle somewhere on the ledge above a fiery death trap. You can grab onto ledges, jump over areas, push blocks in front of lasers, and unlock doors, but you have to make sure that your multidimensional selves are in a safe spot before you decide to move forward. If one of them dies, you have to align them up again.

What I played was a pre-Alpha version of Rite, as the overall look of it is going to be different from what I saw. Nevertheless I was very impressed with what I was able to try. Yes, it does get confusing at times figuring out which character is where, and you will die many times, but that's what trial-and-error is all about. Later on in the demo I had to control three multidimensional versions of myself, which at first was frustrating to figure out how to control all at the same time, but then I stumbled upon the answer to the puzzle accidentally that led me to the end of the demo.

While the release date for Rite is still up in the air, one can estimate that Father Octopus will unleash this brain exercise sometime in 2013.

Cartoony Gore Will Have You Shouti...