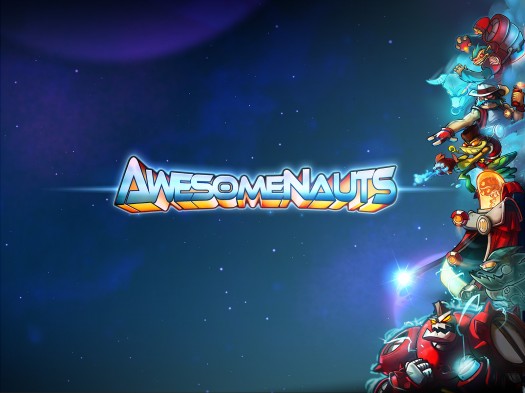 I'm a kid of the 80s, and as one I was exposed to many great syndicated cartoons such as Stunt Dawgs, Bucky O'Hare, G.I. Joe, and Samurai Pizza Cats. When I came across Ronimo Games' Awesomenauts, that exciting feeling that I once felt when those classic shows first appeared as soon as the theme song hit and the backstory told.

Mostly taking place online, Awesomenauts has two teams of three battling head-on as they do their best to destroy the opponents' energy supply while -- at the same time -- protecting theirs from suffering the same fate. A side-scrolling tower defense game in some ways, gamers are given six characters (three to start off with, three more to unlock later on) that have different strengths and weaknesses on the battlefield. The smaller guys tend to be weaker but faster, whereas the bigger guys are slow but can do the most damage. 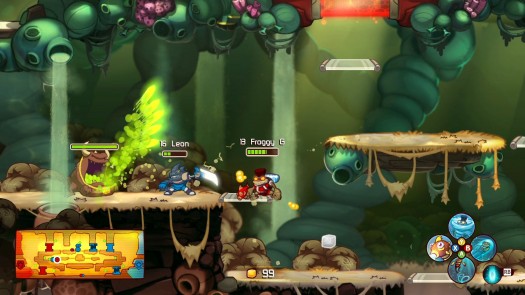 The characters you can play as have, as it were, strong keen personalities. For example Sheriff Lonestar and his Texas droll has the passion for destruction, as he can blast away his opponents, turrets, and energy capsules with his pistol and sticks of dynamite. Leon, on the other hand, is a chameleon whose libido is as dangerous as his lasersword (not to mention that tongue of his). Then there is Yuri, a jet pack-riding monkey who can drop explosions from above. (If that alone doesn't make you want to try the game out, then I have no hope in helping you find enjoyment.)

Online battles can last around 25-30 minutes a piece, so if you are looking to waste some time on some senseless fun, then this game might just be for you. As each battle starts off your guy is given the bare minimum to fight off enemies and take down turrets. Around the levels will be these cubes, which can be used to purchase secondary weapons, upgrade health and power levels, and even add a bit more oomph into your primary piece of machinery. You can grab health orbs from high places, zap harmless creatures, or even just teleport yourself back to your pad to recharge your batteries if you find yourself near-death in battle. If you do die, you will simply relaunch from your space egg, but the more you get yourself killed the longer it will take for you to re-spawn. 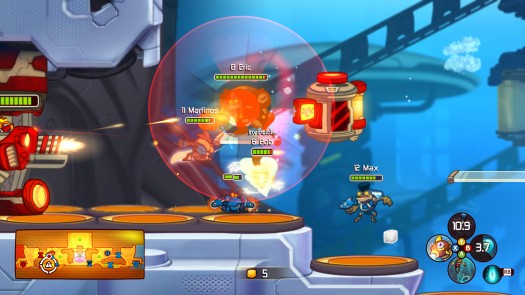 While the online multiplayer is loads of fun, I cannot help but think that Awesomenauts could've benefitted from even just a small Story Mode. Ronimo Games have created these characters that are chock filled with personality and cool-sounding backgrounds, so it makes me sad that I cannot play this game seeing these crazy guys get into space rants, wacky conundrums, and some old-school shenanigans that these people deserve to be placed in. You get a small taste of what a story mode would've been like in the Tutorial, and believe me when I say you'll want to see more where that came from when it's done.

For a MOBA game on consoles, Awesomenauts hits this one out of the park. The control scheme is perfectly crafted, as remembering which weapon does what is simple thanks to the lack of overstuffing various abilities into a specific button sequence (as well as the handy guide on the bottom-right corner of the screen). During my time with this game I was able to either join a new game or become part of a current battle 95% of the time, which is 90% more than my online experience with Skullgirls, which means if you are ready to battle online, Awesomenauts will be ready for you. Finally there is the whole nostalgic cartoon feel to this, where the theme song is super catchy and the characters are idiotically lovable. (Seriously: can I get my hands on some old-school Awesomenauts action figures and playsets?)

As Awesomenauts progresses you'll be able to level up your characters, unlock new ones, and earn a few shiny new upgrades to add onto them for future battles. Ronimo Games has also promised new characters will be released within a few months of release, which leads me to wonder how they're gonna top Yuri. While the matches may take awhile to reach their explosive conclusions, the time will fly by quickly as you partake in these fun little battles, as the game's personality will be all in your face whilst you are gunning down and blowing up your enemies. 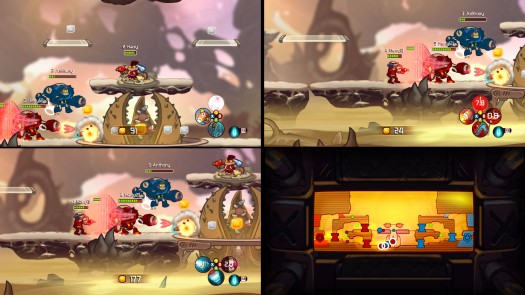 Awesomenauts succeeds in just about everything it sought to accomplish. A big welcome party to non-PC gamers to introduce them to the wonders of MOBA gaming, it spews out enough personality and style that will drag them back in each time. It may not be perfect, but it's a stellar first-try for the online genre. Now if you'll excuse me, I have to patiently wait for an Awesomenauts lunch box to be released...