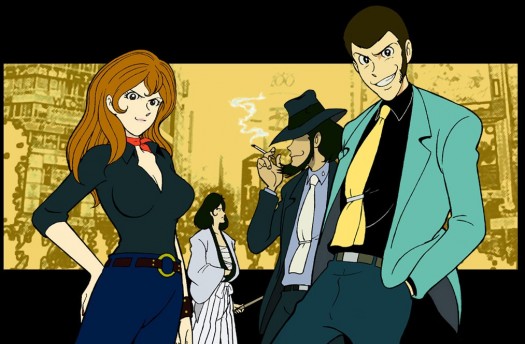 Lock up your jewels, stacks of money, and women. Japan's most famous thief might just be coming back in full force!

In an official press release from Japan's TOHO Cinemas a brand-new Lupin III anime series may be announced at a special screening of the new Lupin III short film Lupin Ikka Seizoroi (or "Lupin Family Lineup" in English). The event, taking place on March 18 at TOHO Cinemas' Roppongi Hills location, will have the series' creator Monkey Punch in attendance, along with some other guests yet to be announced.

Last April it was reported through NTV that a new Lupin III series would appear in the Fall of 2011, but that wound up being a brand-new special called Lupin III: Chi no Kokuin Eien no Mermaid ("Blood Seal - Eternal Mermaid"). This past January the official website for Lupin's 40th Anniversary revealed that a new project would be launched this Spring, though no info was revealed as to what it would entail.

UPDATE (03/03/2012): It has been reported by Anime News Network that the "new series" portion has been removed from TOHO Cinemas' promotion. No word on if it was merely worded wrong, or if it was a leaked surprise.

UPDATE (03/08/12): ANN has now reported that the new anime series has been titled Lupin the Third - Mine Fujiko to Iu Onna ("Lupin III - The Woman Called Fujiko Mine"), and would focus on Fujiko and the rest of the Lupin gang during their early years. The anime, set to air in April, will be directed by Sayo Yamamoto (Michiko E Hatchin) and will have a run of thirteen episodes.

Episode CXXXI: Pictures Of That Ch...