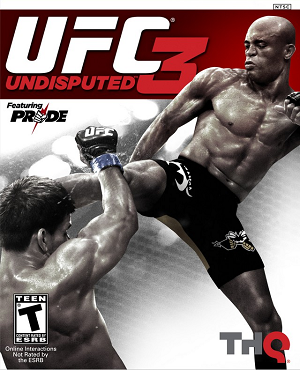 At E3 last year Dana White promised that the next UFC video game was going to stand out above any other MMA title ever released. After going toe-to-toe with UFC Undisputed 3, I am happy to report that he has kept his word.

Undisputed 3 is one of the fullest, most highly detailed sports games ever made. You'll be able to choose from 150 fighters from the roster, including the newly-added bantamweight & featherweight classes and legends from the days of PRIDE Fighting. Career mode has been given a facelift that covers many forms of training. The submission system has been redone to much fanfare, as well as a new stamina system. Most important of all: it gives players the best overall spirit of mixed martial arts; it's as if you'll taking control of a real UFC event. 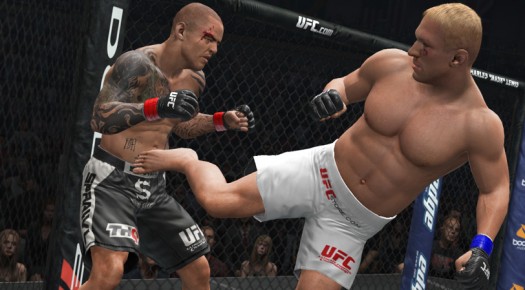 In Exhibition Mode players can put their hands around the seven different weight classes (bantamweight, featherweight, lightweight, welterweight, middleweight, light heavyweight, and heavyweight), with some fighters being able to jump between two of the classes. You'll be able to choose from various arenas such as the Centre Bell, O2, and the MGM Grande; referees can also be chosen for the specific fight. As in real-life MMA the fight will be over via decision, knockout, TKO, submission, or stoppage, with actual rules and regulations making sure you win (or lose) fair and square. However those fighting in PRIDE Mode will find a couple differences here and there.

When fighting in the legendary PRIDE matches you'll only be able to choose to have your match take place at the Saitama Super Arena (where the original fights always happened), with a random Japanese referee watching over the battle. Unlike in UFC there are two moves you can perform that would be deemed illegal elsewhere. If an opponent fails to take you down, you can soccer kick them in the face to catch them off-guard. Foot stomps are also allowed in this mode, perfect for those times when you knock the wind out of your opponent and just want to finish him off quicker. 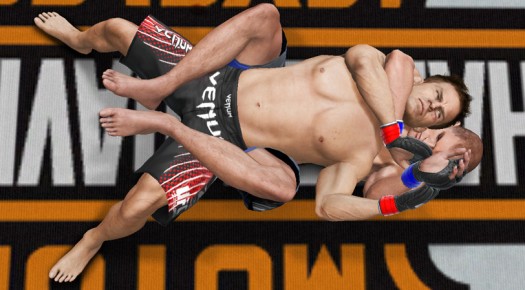 Like in the past UFC titles players can simply punch and kick their way through using the four main buttons on your controller, holding down the left-sided buttons to modify your hits for a greater advantage. Using the right stick will set your player up to grapple your opponent, where you'll be able to do some closer hits or take them down to the mat for some ground 'n' pound. Clicking down on the stick at the right time will pull out the submission maneuvers, which can be accomplished by keeping your colored bar inside your opponent's for a fair amount of time via moving the stick around. In this regard I found it far easier to accomplish submissions here in Undisputed 3 than I did with Undisputed 2010, although the AI still offers a huge challenge with keeping the bar at the right angle.

UFC Undisputed 3 will keep players busy with its many game modes. Career Mode will have players take control of their favorite fighter -- or created one -- as he works up the ranks from fighting in the lower-ranked MMA companies to reaching the big time at UFC. You will be able to learn new moves, as well as perfect strategies to taking down you opponent in the ring. New to the Career Mode is its training style, where gamers will have to play 14 mini-games such as tire-flipping, bag punching, and sparring to rack up more strength points in specific areas of combat; do it wrong, and you could face serious consequences in the ring. 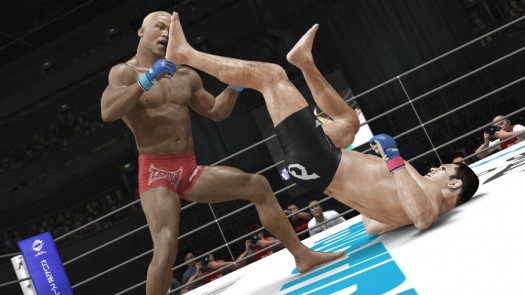 Title Mode will have you taking your favorite fighter in an arcade-like setup where you'll have to fight in as many matches as possible to reach the championship belt. The more you win, the quicker up the ladder you go; lose, and you might find yourself dropping down with the lower ranked fighters. (In my experience I had Mirko Cro Cop lose the championship bout, and his rank went all the way down back to the number nine spot.) Win the belt, and you will be able to defend it against everyone in your weight class in Title Defense mode.

Ultimate Fights Mode will have you replaying some of the greatest fights in UFC and PRIDE history. However a catch appears when you find that some of the UFC matches are only playable after you purchase them from the Xbox Live/PSN Store, a cheap shot for those wanting to jump into some classic bouts from past UFC affairs. Event Mode will give you the opportunity to create your own PPV event, or you can recreate an upcoming event and see what the game predicts for each match. 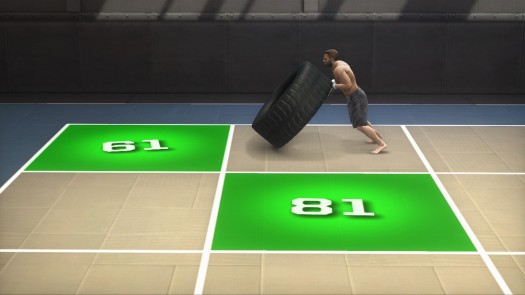 Creating your fighter will give you almost complete freedom when it comes to your warrior's looks, style, and entrance. The details put into this section are nothing short of awe-inspiring. With hundreds of ways to customize through thousands of choices it'd be almost impossible for two people to make the exact same fighter. While you'll have to unlock items like sponsors and special clothing the choices your given at the get-go will not disappoint. The only downside: you cannot create women fighters, a real blow to the female fan demographic. (I also would've liked to have seen there be a way to use your imported music as your fighter's theme, but that's a small issue compared to the one previously mentioned.) You can also create your own logo and banner to showcase when you are in the ring.

The soundtrack for the game is fantastic, capturing the pure essence of what a UFC event brings. Hearing Bruce Buffer announce the fighters with his amazing enthusiasm will send the hairs on the back of your neck up, and the commentary from Joe Rogan and Mike Goldberg has been edited so well that it seems like they are doing it live in your living room as you play. PRIDE fans will be happy to hear that their favorite ring announcer Lenne Hardt has been brought back, rolling tongues and all, along with some standout commentary from Bas Rutten and Stephen Quadros. 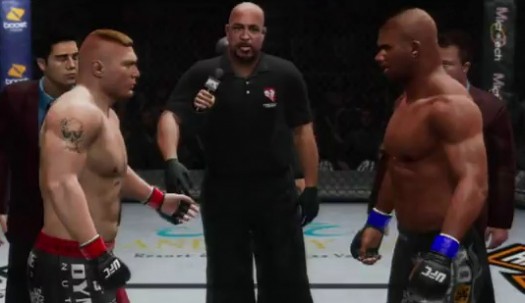 Finally we get to the game's all-around appearance. Using motion capture technology Yuke's was able to bring players the most realistic fighters and moves to the MMA gaming realm. The blood, sweat, and tears flow as good as they do on live TV, and the kicks and punch smack the fighters' faces with gobsmacked expressions. Granted there are a couple weird animation flaws (punches that don't connect properly, AI hiccups), but for the majority of the time UFC Undisputed 3 looks and sounds like the real show.

With its many modes and online play it's going to be tough to pull yourself away from this game. From battling against your friends to taking part in tournament modes for shop points there is tons to do in this latest UFC title. You'll find it hard to repeat the same match twice, as there are plenty different ways to take down your opponent. Along with unlocking some classic fights and behind-the-scenes footage with your favorite fighters from the past and present, there is so much you can accomplish in this game; it might take you until UFC Undisputed 4's impending release date to unlock and play through everything.

UFC Undisputed 3 is everything fans have been wanting in an MMA title. Fans of mixed martial arts both past and present will find many things to fall in love with in this game. I cannot think of another sports title on this current console generation that looks, feels, sounds, and plays as good as this title. In laymen's term: if you love sports, then having UFC Undisputed 3 in your library is just about a necessity.