HomeVideo GamesFrights And Frustrations In Full Supply In "Rise of Nightmares"

Frights And Frustrations In Full Supply In "Rise of Nightmares"

Frights And Frustrations In Full Supply In "Rise of Nightmares" 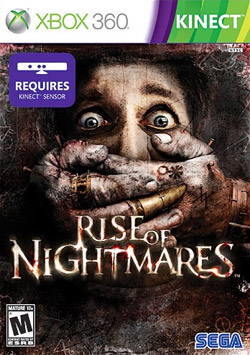 At E3 this past year no Xbox 360 title impressed me more than Rise of Nightmares, a first-person free-roaming survival horror Kinect title. It had it all: creepy characters, smooth controls and some of the freakiest moments in gaming since Resident Evil 4. Does the full version give a shot of originality into the horror realm of gaming, or is Rise of Nightmares one Freddy short of a Krueger?

Rise of Nightmares follows an American tourist named Josh, who is searching for his wife Kate after she was kidnapped by Viktor, a crazed German doctor. After the train he is on crashes Josh -- along with the other survivors -- find safe haven on nearby land, only to be attacked by strange zombie-like creatures. He wakes up and finds himself strapped into a chair, but is rescued by one of the survivors of the train wreck. From there Josh must destroy any creature he comes across, search for a way out of Viktor's lair and rescue his wife from being harmed in any way. 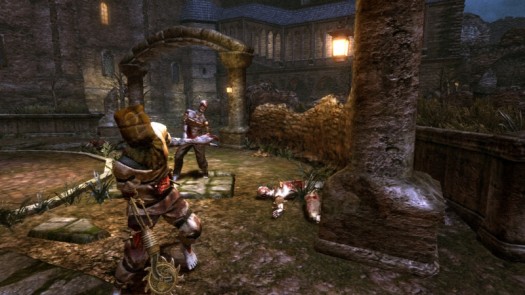 In order to play Rise of Nightmares players must use their entire body in order to operate Josh. Moving forward requires you to step forward, and a step back moves Josh in reverse. Twisting your torso turns your character, and you can melee using your fists and legs. On occasion you'll find objects to interact with, which can be enabled by holding your hand up over the device to walk over it. Sometimes you can let your character go somewhat into auto-pilot mode simply by raising your right arm in a reverse-L position, which will bring Josh to the next section he needs to go to.

For the most part the controls work very well, but there were a few occasions where they started to act wonky. I found that the turning motion is oversensitive, as even the smallest of rotations you perform can spin Josh around like a top. Also while battling the undead in melee mode I discovered that the left arm can sometimes be unresponsive, even if I put my right arm down to see if the Kinect can read it. Moving in reverse can be troublesome in some cases, especially if you have the extreme minimum space needed to make the Xbox peripheral work. 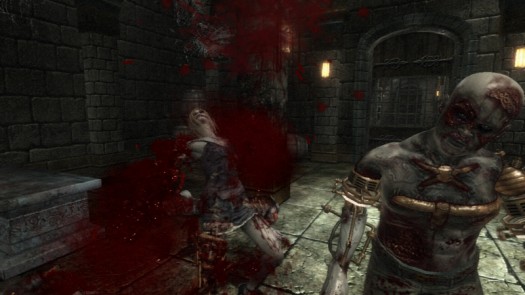 Throughout the levels you will be able to find weapons that can be used to defeat the zombie-like characters, which can range from something as simple as a lead pipe to a more anarchic device like a chainsaw; you can even steal some weapons from the enemies you defeat like the knife arm. Like Dead Island these weapons will get worn out from over-usage, but sadly there will be no way to fix them after they've broken. Fortunately there are plenty of weapons to find around the game, even if you have to backtrack a room or two to find them. Players might get a kick out of the electric knuckles, which give off a shocking punch to any of these abominations you smack in the face. Some might be irked over the fact that you can only carry one weapon at a time, although that does add to the sort of realistic survival style Rise of Nightmares was going for.

SEGA went out of their way to make sure the game looks as scary as it feels. Roaming around Viktor's castle will have you feeling like you've entered a well-designed haunted house, with a fright at almost every corner. The zombies in this title will have you jumping out of your skin, especially when they appear out of nowhere to take you down. Granted there will be moments when Rise of Nightmares treads into campy territory (especially in the boss battles), but that's part of what makes this game fun. The soundtrack created by Ron Fish also knows how to put an extra sprinkle of chills down with your spine, adding onto the tension you'll face while playing the game. Of course you can't forget about the gore factor, which there's plenty of blood splatter, decapitations and even a little vomit to entertain those that were looking for a gruesome good time. 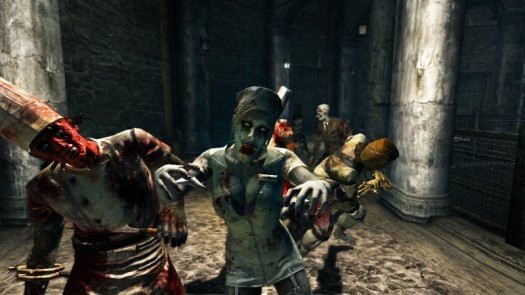 One big gripe I had with Rise of Nightmares was the minimum amount of save points that were within the game, which I had discovered the hard way. I was roughly thirty minutes into Act 3, and I had to stop playing the game to take a break, thinking that it would start up again at the last checkpoint. When I turned my Xbox back on and went into my saved game I found -- to my horror -- that I had to start right at the beginning of Act 3 again. My advice: wait until you reach an actual save point (i.e. one where tips and tricks are shown while the level loads) to stop playing; otherwise you'll find yourself in my shoes.

Rise of Nightmares can be completed within 5-6 hours, a short amount of time for a $50 game. Also absent from the game is any sort of online or multiplayer setup, a shame seeing as it would've been cool to have another player come in and join you in the zombie-killing spree. While there will be a novelty of sorts to watch your friends react to the game there will probably be no reason to return to Viktor's lair after you've beaten it. 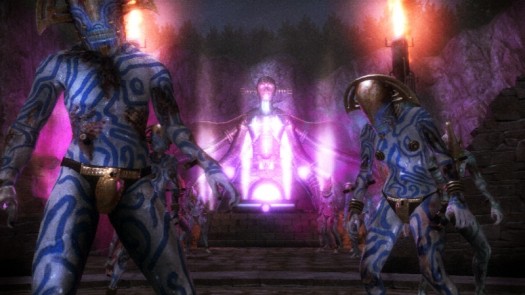 Rise of Nightmares has a lot of potential, but it just can't seem to pull off the showstopper it wanted to achieve. For its first try SEGA has proven that a horror Kinect title is doable. Next time, though, it should make sure that the bugs are worked out of the system before a Kinect game of this magnitude is unleashed into the world. For what it's worth, however, a visit to Viktor's home of horrors is worth at least one go-around.

Episode CXV: Only The Good Die You...