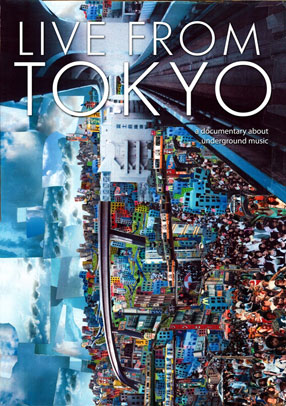 The Japanese underground music movement is hard to both describe and showcase, let alone the J-POP scene itself. Director Lewis Rapkin can only try, and in Live From Tokyo he and his film crew seeks through every crevice of the Japanese capital to capture its true essence. What we get out of it is a very unique look of a thriving and awe-inspiring music community.

Through the streets of Shibuya, Shinjuku and even the alleyways of the smaller areas like Koenji Live From Tokyo takes its viewers on a trip that is both a treat for the ears and the eyes. It's interesting to point out that these artists admit that -- for the most part -- Japan doesn't have much of a rock background, so many of the artists spotlighted here have to do everything within their imaginations to produce something new from an old formula. However while they try to make a name for themselves with Western-inspired melodies the musicians featured also do what they can to keep a Japanese identity within the essence of their harmonies. (A good example of this would be Tokyo Pinsalocks, who mixes Japan's poppy style with European dance rock beats.)

For what it's worth the experimental aspect of these acts are truly amazing at what they do, especially one act calling themselves d.v.d. This band in particular creates its sound via two drummers, video game-inspired visuals and guitar sounds using (surprisingly) a Wiimote. Another band called Optrum features a frontman wearing a steampunk skeletal bird mask and making music from a fluorescent light setup. (How he doesn't burn his hands during a live performance is quite baffling.)

One of the bigger bands featured in Live From Tokyo is Zoobombs, who recently came to America to perform at the annual SXSW Festival. Speaking in pretty good English one of the band members presents his music collection from all around the world, including a jazz funk group from the Congo. He then admits that he doesn't listen to Japanese music, as he finds that the rest of the world's music better enhances his creativity. Sexy-Synthesizer, on the other hand, takes the gaming elements d.v.d. used for the rock scene and places it in the electronica genre, creating one killer soundtrack for a massive party . (Here's hoping an opening slot on a Deadmau5 tour is in the future for them.)

Live From Tokyo is also filled with some eye-popping facts, such as how it's harder for indie artists out there to know they're fairing in gaining new listeners as record sales are affected by illegal downloads. While they know that their music is being spread across the world thanks to Internet sites like [mixi] and MySpace many of these artists still don't have a fair grasp at how big fanbase is getting. It also doesn't help their finances with the fact that most of these bands have to pay to play in many of the clubs in Japan if they don't sell enough tickets, a sad fact for those already trying to earn a buck for their art.

While Live From Tokyo offers a fishbowl's look at an astonishing music world it does suffer from a couple flaws, one of which is it tends to go all over the place, lacking a sort of narrative to piece every scene together. The other flaw is far wider: for a 78-minute film what we get is but the fingernail of the Japanese music underground body. As mentioned in the film thousands of artists perform in Japan every day, so what is featured in the film is a dust flake of the melodies Japan pumps out in a mere night. I am also puzzled by many of the bigger-named artists in the underground music world missing from the film, including Electric Eel Shock, BORIS, TsuShiMaMiRe and Omodaka. (There's some footage of Melt-Banana on the film's official YouTube page, but even their absence from the final cut left me scratching my head.)

Perhaps somewhere down the line Rapkin can expand on this documentary with a TV series, creating a sort of Austin City Limits that is focused on the Japanese music world. Until then viewers interested in checking out a fast-paced look at the Japanese underground music scene will find much to enjoy in Live From Tokyo. You might be pleasantly surprised by what you discover.