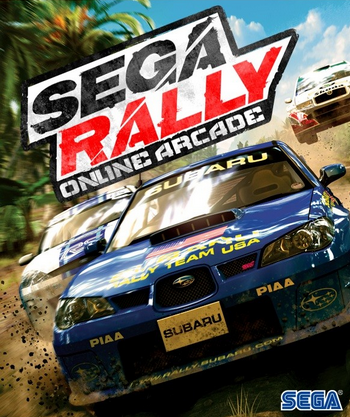 Sega Rally Championship was one of those titles that made gamers charge towards it in the arcades. Its realistic driving and great graphics (for its time, of course) helped to put Sega on top of the racing gaming world. However as years progressed, and more top-geared racers have been made by the likes of Codemasters and even Disney, the days of Sega Rally seemed to be just a thing of past remembrance. When Sega announced that it would be releasing the third entry in the Sega Rally series, dubbed Sega Rally Online Arcade, I was ecstatic. Sadly that excitement quickly turned into disappointment as soon as I pressed start.

In Sega Rally Online Arcade players have the chance to race through three different worlds, five tracks and thirteen different cars. In single player mode there are four choices players can go through: Championship, Quick Race, Time Attack and Classic. In Championship mode players take part in a tournament where they race in three different rounds on the three main courses (Tropical, Canyon and Alpine) and try to reach first place from their beginning 22nd. While zooming past some of the cars is easy at times, it is in the higher ranks where the AI of the game sharply increases, to the point where it is almost impossible to be the top racer in the crew. On second thought, scratch out the "almost" part from my previous statement; it IS impossible to win against the AI in these races, even on the easiest setting. (One hundred races, and I've yet to even come third, let alone first!) While Classic mode has you racing on a very well-made remake on the Desert track from the original Sega Rally the nostalgia quickly dies away when you are faced once again with the ridiculously hard AI. 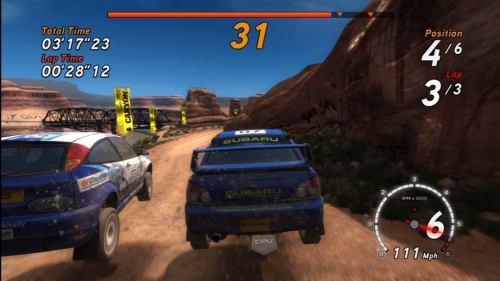 The strongest aspect of the game comes from its multiplayer modes, which can be played both split-screen and online with five other players. The vast amounts of gaming styles shine brightly through in Sega Rally Online Arcade, including Dominator (where player with the most points via the track's checkpoints wins), Knockout (the last-place racer in each lap is eliminated), Time Lag (the player behind the first place racer must cross the checkpoints within a few seconds or be defeated) and online modes of both Classic modes and Championship. It is here where I started to wonder what sort of stellar game Sumo Digital Ltd. could've made if they had focused as much time and effort on Single Player mode as they had in Multiplayer mode. Nevertheless the vastness of the multiplayer section in Sega Rally Online Arcade was quite refreshing.

Using an engine known as Granny 3D it is a wonder at how good Sega Rally Online Arcade looks, despite its massive flaws. The shine of each vehicle is spot-on, and the terrain you race on each level leaves your vehicle with realistic scratches and bumps, not to mention the occasional mud stains on both your car and screen. As far as the sound goes it comes quite close to feeling like you're taking part in an actual race, thanks in part to the revs in the vehicles engines and all-around atmosphere around the levels. One thing's for sure: the folks at Sumo Digital Ltd. have what it takes to make one amazing racer. Unfortunately you won't find it here. 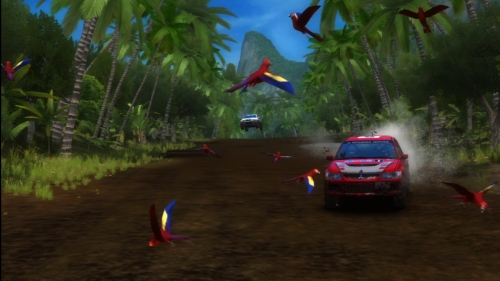 With only five tracks to race on the game gets old fast, and the fact that you have to unlock over half of the vehicles and tracks to play them makes it all the more frustrating to play. In order to unlock these "gems" of sort you'll have to win specific racers, which wouldn't be so bad if the AI wasn't as difficult as it was. I know it sounds like the immature complaints of a gamer who can't take the outcome of a loss well, but I cannot stand a game that doesn't give you even the slightest leeway of chalking up a win. There is a supposed to be a fair balance between AI and gamer, but it seems that the developers made the computer-controlled racers too smart for their own good.

As an online racer Sega Rally Online Arcade does a fine job with catering to the needs of those wanting to find some fun with gamers from across the world. As a single-player experience, however, it fails to reach the lengths of other racing games like Dirt and Split/Second. While it may sound like a steal at 800 MSP or $9.99 on PSN the frustrating outcome of your races will be a sharp reminder that you had just wasted your money on a mediocre, unforgiving title. My advice: steer off-track to avoid this car wreck of a racer.