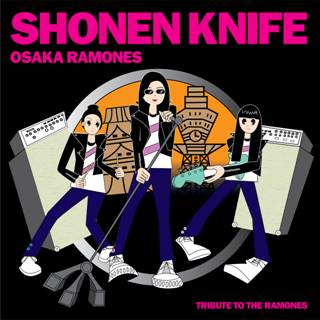 Much gratitude is owed to Shonen Knife, the Japanese rock band now celebrating their thirtieth anniversary. The likes of Sonic Youth, Nirvana, White Flag and many others have praised their love for Naoko and company, even going so far as to either record tributes or -- if they're lucky enough -- share the stage with them. Without them the alt-rock industry (especially the grunge category) would've probably been more of a footnote in the history of music rather than the encyclopedia it is today. However had it not been for a certain group of punk icons the trio may not have been the band we see on stage now, which is why Shonen Knife are commemorating this occasion with the release of Osaka Ramones, a tribute album to Joey, Johnny, Dee Dee, Tommy and Marky.

Based on their side-project Osaka Ramones showcases thirteen classic (and sometimes underappreciated) tracks from the New York band, still containing much of the angst and fun that continues to thrive in the original tracks. Thankfully the beach blanket bongo style of Shonen Knife is not lost in the shuffle, as evident in "Blitzkrieg Bop" and "Sheena Is A Punk Rocker." "The KKK Took My Baby Away" continues to be a tongue-in-cheek joy to listen to with the Shone Knife twist, as does the smile-inducing "Beat On The Brat." You won't find "She's A Sensation" or "I Wanna Be Sedated" (which was on their Burning Farm rerelease); instead we have the underplayed tracks of "Scattergun" and "She's The One" brought back into the well-deserved limelight.

Many a tribute have been heard to the Ramones, some good (Danko Jones's "The Return of Jackie & Judy," Bad Religion's "We're A Happy Family") and some we wish to never hear again (Rob Zombie's "Blitzkrieg Bop"). The ladies of Shonen Knife, however, managed to turn out an impressive lineup of good-hearted renditions of the songs we've loved for almost forty years. The covers will never stand up to the originals, but the songs still maintain the true punk rock spirit while containing the pop-happy style of this J-ROCK trio. Joey, Johnny and Dee Dee would approve of this homage, and hopefully soon a band will pay a similar tribute to Shonen Knife as they have done here with Osaka Ramones.

Episode CII: Jeter The Deadliest B...