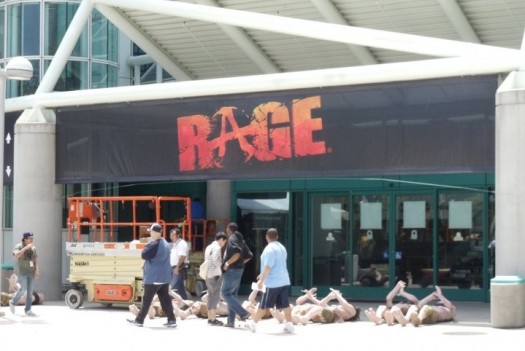 Rage is one of this year's most hotly anticipated titles, and after going hands-on with it at E3 there are plenty of reasons why.

Developed by id Software (the same folks that brought us Wolfenstein, Doom and Quake) and published by Bethesda Rage will have players take the role of a survivor in 2038, where a meteorite impact has caused the world to let all hell break loose. Hostels and mutants reek havoc on what's left of Earth, and it's up to you to restore order in your area. With your trusty dune buggy you must travel throughout the land to blow away the freaks and creatures that aim to strike fear into the hearts of the remaining survivors. 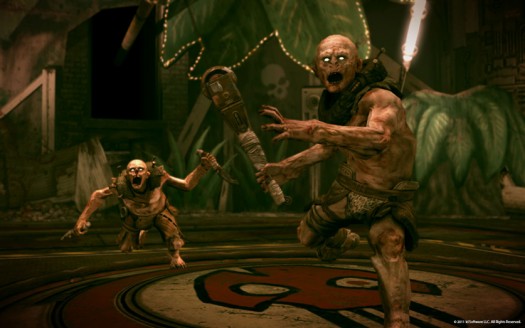 At E3 I was able to go hands-on with the Mutant Bash TV level. In it your character participates in a game show where you'll have to kill mutants in the quickest time possible to earn cash. You enter a certain section of the TV studio, and the mutants enter through the floor, doors and Futurama-styled pipe entries. As soon as I walked onto the game show floor the mutants came charging at me, with my initial response being to shoot until everything in the room is dead. Easier said than done, for the AI in Rage is ridiculously hard. I found it took roughly twenty shots to kill the weakest of characters. However when it came to take on the final boss of the level (a Kraken-inspired freak of nature) I wound up destroying him in under a minute, which was quicker than dealing with a regular mutant.

I had a bittersweet experience with the controls. The good news is it's easy to switch weapons and use the secondary ones, sometimes while in the toughest parts of battle. Meleeing is also far easy than in most games, coming in as second-nature to what you do in the game. However because of the speed of the AI it was almost impossible for me to aim properly at the mutants, leaving me to waste more of my ammo than actually use. Trust me when I said that easy melee maneuver will come in handy when six of those creatures are slicing at you all at once. One big side of Rage features some of the most gorgeous graphics I've seen in a game at E3. Everything from the scratches on your dune buggy to the facial expressions on the mutants was heavily detailed, and with the game running at sixty frames per second and no lag it is clear that not a second of the four years it has taken to create the game have not been wasted.

What I saw at E3 was just a fraction of what to expect when Rage is released, a title that will also include two multiplayer modes, weapon and buggy customization and even Burnout-styled racing. With a release date of October 4th on PS3, Xbox 360 and PC id Software is gearing up to show once again why they're the true kings of heart-stopping first-person shooters, and with Bethesda on their side Rage is looking to blow people away with its stellar graphics and apocalyptic gameplay. Just prepare to use your melee skills to the fullest potential, and savor the bullets for when the right moments come.

"Gunstringer" Has A Stra...