Going into this, I really did not have a positive attitude.  Few of these PopCap-like games actually hold my attention.  There are the random few that stand out, but the replay value is always short.  Peggle is good for a play-through or two, but unless you want to ask friends to play then you are out of luck. (I always equate asking someone to play Peggle, which is like asking them to watch porn with you.) World of Goo was amazing, but I cannot be bothered to get all the OCD achievements. So it originally did not look good for Dwarfs?!.

While this downloaded on Steam, I watched the preview and originally thought it was going to be a simplified Dwarf Fortress game. Now I would not have been disappointed in that, but if you are as nerdy as me and have played Dwarf Fortress… you would be wrong.

The title screen launched, and the first thing I looked for was a way to learn how to play this game.  The menu has lots of options like Arcade, Campaign Tower Defense, and may other modes. For a small indie game, multiple game modes make it a little interesting for me.

Being the strange person that I am (I am so strange I read the game manuals to understand the game to its most), I started off with the Tutorial.  They took the approach to slam you with as much text as possible to explain what is going on. 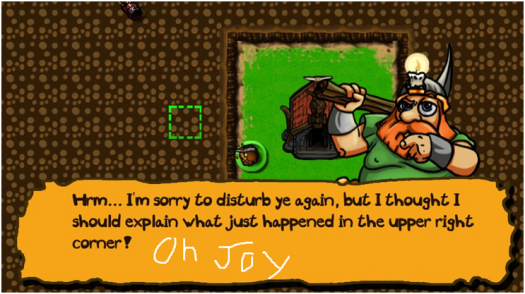 I am a fan of the tutorial to be almost unnoticed, but it is a game I would find hard to play without having someone explain the mechanics to the player.  You could possibly highlight the buttons and parts on the ground to display where to place an item or an order, but I am still just nitpicking this.  Let me be totally clear on this: PLAY THE TUTORIAL AND READ ALL THE TEXT.  Dwarfs?! is an indie game, and being such it is based off the unique mechanics to make it stand out from the massive amount of other games out there.  This game is unique and plays like no game I have ever tackled before.

Finally I get to the gameplay, which is quite strange.  You start out with a few dwarfs running around your main structure. If you sit there your digger dwarfs run out and start digging in random directions and paths. If you want to direct them you can drag arrows (or waypoints) on the ground to direct them.  You can tell a dwarf to move in the direction, but the arrow will stay on the ground and any dwarf who runs over this will start along the same path as the last. The counter to this is that the arrow slowly degrades and disappears after a short time, but it cannot be deleted (so be careful you do not have a group of dwarfs around when you place them, unless you want all your dwarfs to head that direction). 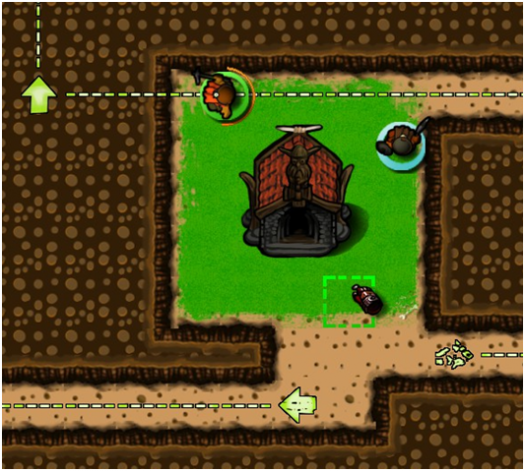 The reason for these arrows is to send dwarfs to either minerals or caves. Digging normally gives you money, but minerals give you tons more money. Caves are the real feature to this game, and with dwarfs they should be.  These caves can be filled with a few things and are worth exploring. They can have treasure in them, water, lava, monsters, and bosses. The objectives are easy: block the water and lava in with “wall” or thick stone and fight and kill any monsters and bosses.  If you do not block water and lava, then it will travel through your base and flood it.

You can kill the monsters off, but the bosses are much tougher and spawn basic monsters over time.  The trick with this game is balancing the control of your dwarfs without using up your money to block off bad caves. 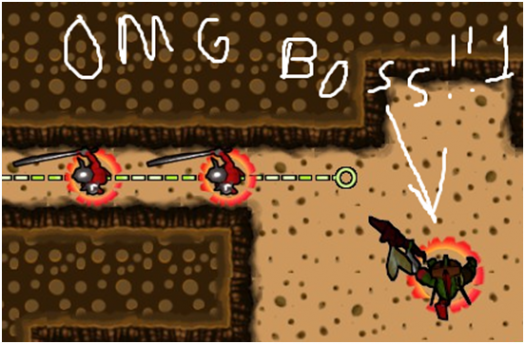 As the game goes on, more dwarfs spawn, making it harder to control the building mass of bearded drunks with a major impulse to dig all day long. 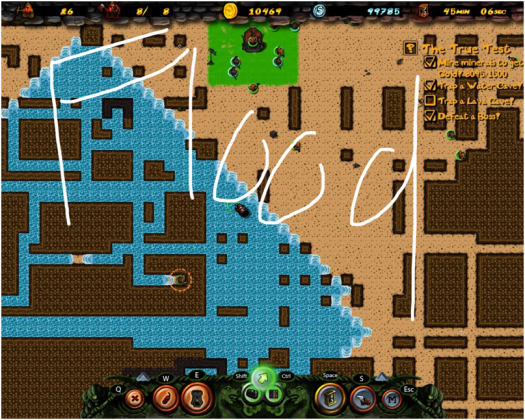 If you get bored of the main game you always have the Tower Defense part. (I think you will overplay the main game and not want anymore before you truly come to this.)  I would not get the game for just this part, but it is a nice add-on.  Your first four waves spawn a monster base each, with one lone dwarf at the base who then tries to dig back. You can direct him and create the lanes you want the waves to travel in (using the same arrow system that spends your money). After that it turns into your basic flash tower defense game.  You have eight towers ranging from arty-like tower, slow tower, stealth detection tower, and boss-killing tower (some hybrid towers here also). Hold off the waves and hope the paths you made were good enough to defend your main base. 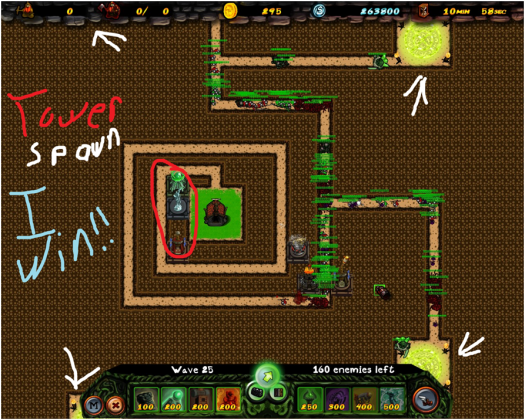 Dwarfs?! replay value was great, and that adds major props (because there is only so much I can watch a plant shoot a zombie before the levels get boring). Unique gameplay is also a must with most indie games, and this game gets that. I do not expect much from art for an Indie studio, but I was amazed that all the art was nice and flowed with the game (tell your artist they did an amazing job).  The tower defense had a twist, but was an added and unexpected feature for an already complete game.  For a demo this gave me a great idea of what the game is like, and I love to be able to test games before I play them. If you are the least bit interested, try the demo and it will give you a great idea of what to expect.   The only reason I will not rate this perfect is because of the lack of mini-map and limit on the map size for unlimited time mode (if this gets patched then this game will be a solid 5).  So I shall rate the demo version of Dwarfs?! a 4.5 out of five.  They can expect me to come back and buy this game when I have the extra money to throw and free time away from the other games I am addicted to now.