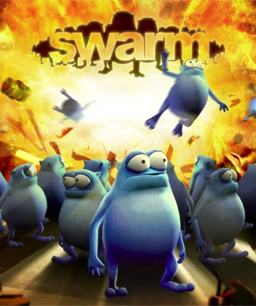 How does one describe the upcoming Hothead/UTV Ignition title Swarm? A little Lemmings here, some Overlord there and a big bucket of zaniness that is so adorable it's almost mind-numbingly brilliant.

At PAX East yesterday I was able to try out one of the first levels of Swarm, due to be released this month on Xbox Live Arcade and PSN. The Swarmites appeared on screen with the help of a strange tentacle called "momma" pouring them out. In order to complete the level you must have the right amount of Swarmites throughout the specific checkpoints. You start off with fifty of the little buggers, and then it is your job to control and "protect" them as they come about jumps, traps and other nasty things that will try and murder your tiny buddies. 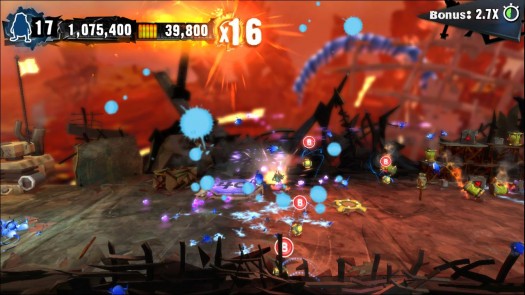 How you avoid a Swarmite massacre depends on the tactics you use to beat the levels. With holding one button they will be all grouped together in a Swarm army (or "Swarmy" if you wanna be clever). Press another button and they will rise up like a tower, which could help out with those long jumps. Sometimes, unfortunately, you'll have to sacrifice some of your Swarmites in order to move on to the next part of the level, especially when it comes to bear traps, hidden spikes and various other killing machines. There are some areas where you'll have to try multiple times to get to an area, each failure resulting in penetrating death. (It took me about five times to get over one painful hurdle, and I finally wound up escaping with only forty-seven of my minions killed.) On the plus side you will be able to regain your lost comrades in egg-like health packs. The more Swarmites you have -- along with how much DNA you collect -- the higher your score in the end.

Just from this one level alone I could tell that Swarm was bound to be one hilarious game. (The possibly-banned trailer that was playing at the booth -- consisting of a young girl's passion for murdering the Swarmites -- also clued me in for what sort of game this was gonna be.) The graphics look really good thus far, as they put a lot of emphasis on the cartoonish aspect of the game. Controlling the game got easy as well once I figured out which button did which, and I managed to end the level with all fifty of my Swarmites. With its many achievements to be earned, multiple puzzle-solving techniques and its live death score tallying Swarm is gearing up to being one of the most addictive titles to come out this year on the consoles.

Looks Are Deceiving In Trapdoor&#0...

No Podcast This Week