The folks at Twisted Pixel Games have been responsible for some of the funniest, most entertaining games to come out in the Xbox Live Arcade. From the insanity in 'Splosion Man to the hilarity in Comic Jumper the developers who are powered by comedy, beards and ukuleles know how to create some of the most original and smile-inducing titles to our television sets. At this year's PAX East they have brought with them not one, but two titles that are due to be released in 2011: the Kinect title The Gunstringer and Ms. 'Splosion Man.

The demo showcased for Ms. 'Splosion Man managed to take the saying of "If it ain't broke, don't fix it" and throw it to the wayside, and not only was that ballsy, but also the right thing to do. The original 'Splosion Man only given a six-month development window, so the guys and gals at Twisted Pixel decided to put more into the sequel than they could with the original, all without the worry of a scheduled due date.

"There was just so many ideas and so many things that we had that we wanted to do, but just didn't have the time," said Jay Stuckwisch, Twisted Pixel's community and merchandising manager. "Now luckily with the thought of doing Ms. 'Splosion Man we actually get to give to our fans what our initial vision was." 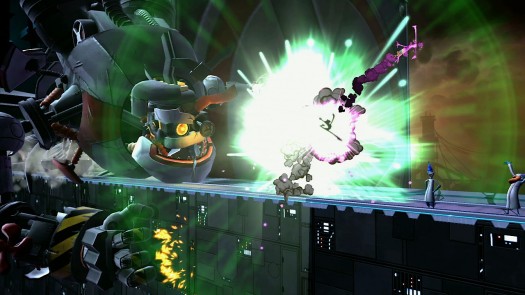 The original 'Splosion Man was a complex side-scroller with a simple means of travel: run and blow up! From what I played in the Ms. 'Splosion Man demo there were more means of transportation to get from one point to the next, including cannons (in a similar vein to Donkey Kong Country), zip-lines and flying cars. The first two were a breeze to use, whereas the flying cars might cause a bit of frustration if you don't explode at the right time. Another big difference from her male counterpart were her vocal skills, who instead of speaking incoherently talks and has the personality of a stereotypical teenager. The lines I heard from her (who is voiced by Brina Palencia) were priceless, and ranged from mall chatter to even quoting Beyonce song lyrics. (There's a reason why the Ms. 'Splosion Man logo looks the way it does.) There is even an appearance from The Mighty Eternal, the first boss from 'Splosion Man, although the years haven't been so kind to it.

After playing Ms. 'Splosion Man I was given the chance to try out the Kinect title The Gunstringer, where you control the game like you do a marionette. Players will use their left hand to move the title character around, and their right arm to aim and shoot. Due to the small space I was given to play, not to mention the massive amounts of people walking around the area, the Kinect was having major issues with reading my movements. It seemed like every 20 seconds the game had to stop so it could rescan me, and while flaying my arms around I almost accidentally whacked one of the Twisted Pixel women in the head. When the errors weren't affecting the gameplay, however, controlling The Gunstringer was fairly easy, with the Kinect system able to tell when I was moving my arms. 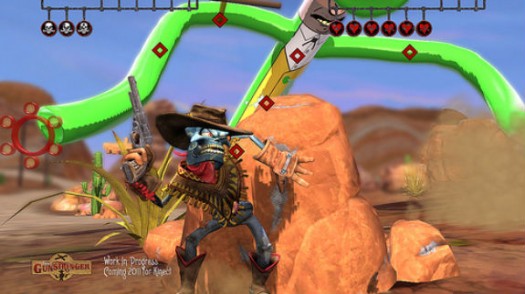 Also showcased in The Gunstringer demo was its mixture of gameplay and live-action videos, as the world of The Gunstringer takes place onstage in a community theater. Back in January, when the game wasn't announced, Twisted Pixel brought some of their fans to the Paramount Theater in Austin, Texas to record some theatergoer reactions, ranging from applauses and laughter to high-fives and man hugs. After the footage was done they integrated it with the game itself, creating a title that plays like a shooter but with the true feel of a small puppet show. The folks at Twisted Pixel are no stranger to mixing live-action with their games, as evident in Comic Jumper, and from what I saw in the demo you can expect something really special in the final product.

Even with two new titles to be released this year Twisted Pixel is already gearing up for its next game. On Saturday at their Twisted Pixel Variety Hour panel the crew had the audience members record various hoots and hollers to be used in a future title. Although he couldn't reveal much about the future of Twisted Pixel it sounds as if they are nowhere near short of gaming concepts.

"We always have tons of game ideas, and it's just picking which ones we want to do," said Stuckwisch. "It's looking like we have our next game pretty much solidified. I know [Matt "Chainsaw" Chaney] will definitely use that audio wherever he can."

The Gunstringer is due to be released this Spring, and Ms. 'Splosion Man is due to follow later in the year, both of which are Xbox Live Arcade exclusives. An official release date for each game will be released soon.

Rockstar Gets Mature For "L.A...

Looks Are Deceiving In Trapdoor&#0...