HomeVideo GamesEvolved "Space Invaders" As Addicting As Ever

Evolved "Space Invaders" As Addicting As Ever

Evolved "Space Invaders" As Addicting As Ever 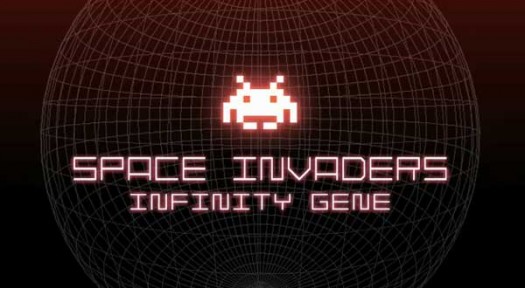 2010 has become the year of nostalgia gaming. Scott Pilgrim VS The World gave us the feel of classic beat-em ups; Xbox's Game Room had players construct their own personal arcades and compete with other players; and recent adaptations of Mega Man and Sonic The Hedgehog have decidedly gone back to their roots. Now Space Invaders has made its return, in the form of the evolved Infinity Gene. Hail to the arcade king, baby!

The original developers at Taito (along with publisher Square-Enix) decidedly went with a different route with this Space Invaders. Players start out the Normal mode like the original Space Invaders game, only to have it stop about fifteen seconds in. All of a sudden a quote from Charles Darwin will appear:

“It is not the strongest of the species that survives, nor the most intelligent that survives. It is the one that is the most adaptable to change.”

As soon as this quote appears the game gets interesting. The whole world of Space Invaders is suddenly turned upside-down, and is transformed from a fixed shooter to a scrolling shooter. Aliens and ships come flying onto the screen, and it's up to you to defeat them all before they destroy you. Of course the folks at Taito made sure that the jump to the different game styles isn't as smooth as you'd like it to be. 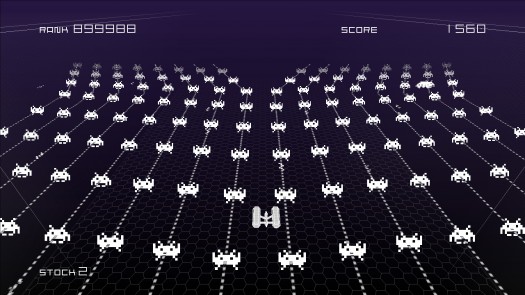 When the game transforms your ship is still in fixed shooter-mode, and in order to get yourself into a scrolling shooter mentality you'll have to help evolve your ship by earning enough points and reach the ends of the levels. The upgrades can vary from free movement and different weaponry to hidden levels and other bonus goodies. Believe me: you'll breathe many sighs of reliefs when you start gathering up these upgrades. The graphics stay true to form to the original game, but the updated backgrounds and smoother gameplay help bring the Space Invaders back in form for the 21st century.

Infinity Gene contains four gaming modes. Normal mode has players face off against the invaders in various types of levels, sometimes ending in some kind of boss mode. The game starts off easily, but once you get the hang of it all the levels warp speed the difficulty. Some may be turned off by the quick difficulty, in which case I recommend turning it down to Easy in the Options menu. Others -- like myself -- welcome the fast difficulty, as it brings the Space Invaders world to a place that it rightfully deserves. Yes it's hard, but you'll have a ridiculous amounts of fun nonetheless. The control scheme is as easy as it should be. Move your D-Pad/control stick to move, and shoot with either of the buttons. It's so simple a Space Invaders fan cryogenically frozen in the late 1970s can pick up this game no problem. 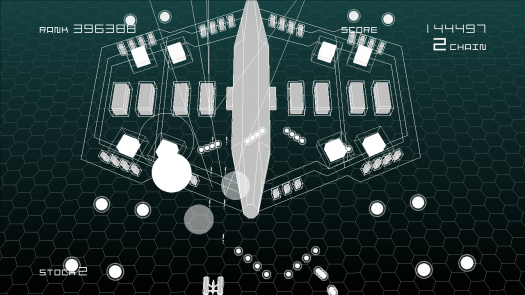 Both Challenge Mode and the Bonus Stages are nothing to get excited about, sadly. They just seem to be simple survival levels where you just play the game until you survive to the end. It's a shame, really, as this could've been a chance for Taito to sneak in some of their other gaming classics into Space Invaders as hidden gems (such as Lunar Rescue, Balloon Bomber and Bubble Bobble). Alas we are given levels with little to no pizazz.

Finally there's Music Mode. This, my Bastards and Bastettes, is where all your time is going to be spent playing and developing those crooked thumbs that Groundskeeper Willie got from playing the original game for days on end. In Music Mode you will have a chance to play Space Invaders levels built around your music library. If you have music on your PS3 or Xbox 360, then prepare to spend hours playing this mode; if not, then it sucks to be you! I tried out the Music Mode using tracks from the likes of The Hives, Rammstein, Fucked Up, Busdriver, TsuShiMaMiRe, Guitar Wolf and a shit-ton of other artists, and every single one of those levels were in near-perfect synch to the songs. Yes, it will be the same level for the specific song, but that's a good thing because in this case you can help build a sort of strategy to help someday beat the song-based level. 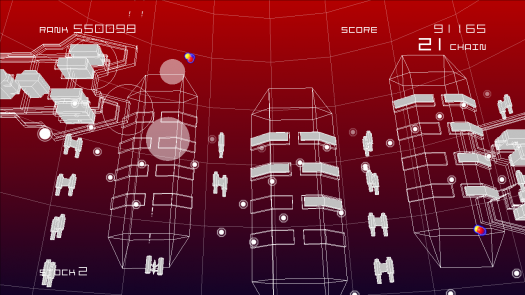 Here's the best part: no two music levels are the same, so you can have thousands of songs on your console and you will never face a repeated level of any sort. What does that mean? Simple: billions of songs = billions of different levels = the ultimate replay value. Infinity Gene's Music Mode is the best thing to come out of downloadable gaming, and while there are various other games that have a similar mode like this (Audiosurf being one of the top dogs), it doesn't match with what Taito has accomplished here.

Space Invaders Infinity Gene is a nearly-perfect remake just for the Music Mode alone, but the bland Challenge Mode will leave gamers wishing for more. Still for $9.99 (800 Xbox Points) you will be able to play one of the best DLC games on the planet. The game will get tough as it progresses, but fortunately with all the Evolution upgrades you will be able to conjure up a strategy in no time. Heed this warning, though: Music Mode with any Busdriver song will equate to a sort of ridiculous difficulty that needs to have its own word for it.