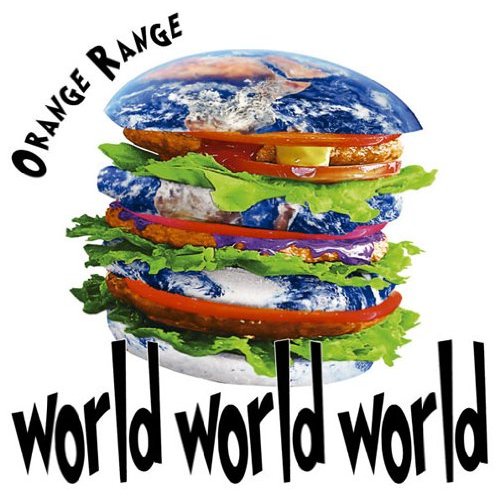 It is said that repeating certain words three times can conjure up bad luck. “Candyman” leads to murder, “Beetlejuice” brings forth dangerous mischief, and “Biggie Smalls” makes the soul of an overrated deceased rapper appear. One other word can now be added to that list: “World.” By repeating this word three times, a much uninspired album will be bestowed upon an unlucky band. In 2008 it happened with Asian Kung-Fu Generation.  This time the victim is Orange Range, and wow is it vomit-inducing!

World World World starts off unimpressively with “The Map,” a creepy song that takes the 8-bit music fad and beats it like a dead horse. It is followed by “FACTORY,” an insipid dance track that doesn’t have a good groove, but the rock interlude is a nice touch. “KIMAGURE 23” has no idea what type of song it wants to be. It sounds like it’s trying to be a Gundam theme song, but it comes out more like one of Arashi’s appalling love songs. “White Blood Ball Red Blood Ball” appears on the album as a Dub Mix; a bad one at that. (Perhaps they should’ve recruited Spacemonkeyz to do a better job.) “space girl” is where the album hits its lowest point, but then at the one minute mark somehow transforms itself into a decent pop rock track. “Hitomi no Sakini,” though poppy, has a good string section to give it more potential than it should be allowed; but then the Hawaiian-pop knock-off “HIBISCUS” appears to insult the listeners’ intelligence.

“Oni Goroshi,” the album’s only spectacular melody, is what Orange Range should’ve been doing since the beginning: rocking out at 100 MPH. It is the type of track that made them well-known in Japan. Unfortunately one incredible song doesn’t do the band any good if the other twelve range from horrible to mediocre. The only other real highlight on the album is “Japoneze,” Orange Range’s attempt at rapcore; and that’s not saying much.  Though the beat and chorus are great (and has a bit of a psychedelic rock charm), the verses are cluttered and pieced together at the wrong places.

Orange Range knows better. By releasing an album like World World World they have insulted to both their fans and the Japanese music scene. Perhaps their former drummer Kazuhito Kitao had it right when he left the band. He foresaw what would happen to Orange Range’s sound in the future, and bolted right when the band was at its peak. World World World will make any long-time fan of Orange Range sick to their stomach, and will scare any newcomers from hearing their older, much better stuff.