"Tatsunoko VS Capcom" An Instant Classic

"Tatsunoko VS Capcom" An Instant Classic

Wii owners in America should feel blessed to receive Tatsunoko VS Capcom: Ultimate All-Stars. When a game comes out with characters that aren't really known outside of Japan some may call it a gamble, no, taking a leap off of a cliff using a tricycle. Here both Capcom and Tatsunoko strap a jet pack to the trike and soar higher than any fighting game has, and then safely make a perfect landing.

For those unfamiliar with the Capcom's versus games (i.e. Marvel VS Capcom, Capcom VS SNK), here's how you play. You choose two fighters from your roster and battle it out with other characters one-on-one in a tag-team-styled match until you reach the final boss battle. Each fighter has a wide range of attacks and special moves, and the higher the level the more powerful the attack. Players can also have their partners come in to help defeat your foes, which definitely comes in handy with the bigger characters. The more you play the Arcade mode the more goodies you'll be able to unlock (i.e. secret characters, alternate costumes). In Tatsunoko VS Capcom the lineup is unique, to say the least. On the Capcom side you have regular favorites such as Ryu and Chun-Li from the Street Fighter franchise and Mega Man. You also have new faces like Frank West from Dead Rising and PTX-40A from Lost Planet: Extreme Condition in the Capcom fighting ranks. The moves these Capcom favorites showcase range from the classic to the just-plain awesome. While Chun-Li has her trademark kicks and Mega Man has his blaster, Frank West has his zombie buddies popping in to lend a hand and a shopping cart to the battle. The developers over at Eighting made sure that their fighting styles matched in-sync to the games that we loved, and they got it done right.

Over on the Tatsunoko side, however, we have a lot of characters that only the most hardcore anime fans know; and even there some are still scratching their heads. You've got members from Gatchaman (Ken the Eagle, Jun the Swan, Joe the Condor), Yatterman and his arch-nemesis Doronjo, Casshan from Neo-Human Casshern and Gold Lightan (a giant robot that manages to disguise himself as a Zippo lighter). I can already hear some of you going "Who?" or "Wha?" but by Day One of playing this game you will want to watch some of these classic anime series. Like the Capcom side the fighters on team Tatsunoko have their own unique ways of battling. Gold Lightan literally will just stomp and crush the tiny competition, which will lead to easy regular matches but more tricky boss battles due to his slow speeds; Doronjo will have her henchmen Tonzura & Boyacky come out on occasion to do her dirty work; Yatterman will have his trusted robot dog Yatterwan appear to bulldozer the competition; and the Gatchaman characters use flying techniques for themselves. When it comes to keeping with the tradition of the classics Eighting did a perfect job with getting everyone's techniques right. There are four different ways you can play this game: with just the Wiimote, the Wiimote with nunchuck, the Classic Wii Controller and the Gamecube controller. The latter two are perfect for those unfamiliar with playing these types of games, whereas the former two are more for those that are experienced with the Wii. I will say that playing with the Wiimote and Nunchuck feels the easiest, whereas just the Wiimote can lead to more button-mashing than is necessary. Having said that, however, you will have sore fingers after playing this game, as you will have to let your hands do most of the work while your brain concentrates on what the opponent has hiding in their sleeves. I have also seen a special Arcade Stick for the game released by MadCatz, but seeing it's $80 I'm sure only the most hardcore gamers out there would go out and purchase it. I'm happy with the regular controls, and I'm positive your average gamer would be, too. I could not ask for better graphics in an anime-based game. Each character looks as if they had jumped off the animation cel they were painted on and started kicking ass & taking names. On top of that the 2.5D worlds are beautiful to behold. Gamers will wish they could walk around in these stages, but alas it's not to be this time around. Capcom made sure that Wii owners received the best of the best when it came to appearance, and they left little to disappoint. In laymen's terms: Tatsunoko VS Capcom is one of the best looking Wii games out there. On top of that the soundtrack is phenomenal, and working in the stereo effects in both the sound and music adds more coolness to this amazing game. (At times it was like watching a classic kung fu battle with a score by Daft Punk.)

With the Nintendo Wi-Fi players can battle it out with anyone from around the world. In Free Battle players can fight against any character, whereas in a Ranked Battle players can earn more points to unlocking goods in your shop. You also have the option of fighting your friends depending if you both have each other's friend code. (Why they just don't let you use your Wii Address Book code I have no clue.) Capcom has already mentioned that if this game succeeds they will add more characters as downloads, so those hoping to see Tatsunoko properties like Speed Racer and the Samurai Pizza Cats or Capcom characters Leon Kennedy (Resident Evil) and Harman Smith (Killer 7) may still luck out. One issue I have with the game is the loading time between online battles, but this could easily be overlooked thanks in part to everything else in the game shining as bright as the sun.

Hidden in Tatsunoko VS Capcom is a nice mini-game known as "Ultimate All-Shooters," in which the characters fight in a shoot-'em-up styled game battling various creatures and monsters. It's very reminiscent of such classics as Galaga and Phoenix, so it should help savor those in need of nostalgia. (Finding this minigame may be hard, but here's a hint: Press A during the end credits, and look for a pattern.) One thing that did not make it into this game, sadly, were the animated endings. Fortunately for YouTube these endings can now be seen for those outside of Japan (may contain spoilers):

Gameplay as a whole leaves nothing to disappoint. Players will have no trouble with going back and playing the arcade modes with different characters to see how each different team would fare, and try to up the difficulty each time. Those that are unfamiliar with some of Tatsunoko's properties will want to become more knowledgeable about them after they go a round with some of the characters. Plus, for the first time in awhile, Wii owners can hear those with PS3s or 360s complaining about not having this game, and for good reason: Tatsunoko VS Capcom: Ultimate All-Stars is already this year's best fighting game. I cannot stress this enough: buy this game! You will enjoy it for hours on end, and will never grow tired of gazing at its beauty. Everything about it works, and there seems to be no sign of error. Hopefully with the success of Tatsunoko VS Capcom: Ultimate All-Stars, more games of this caliber will find its way to our shores (and possibly a chance to see something like Yatterman get a proper US license). I repeat: buy this game if you want to bear witness to more like it. 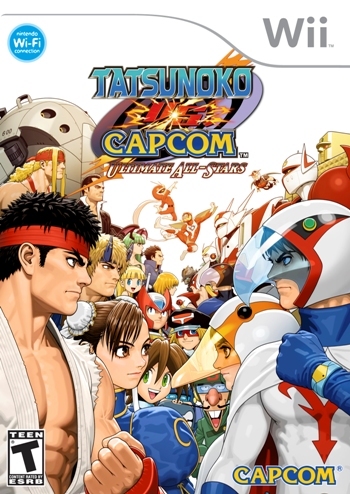