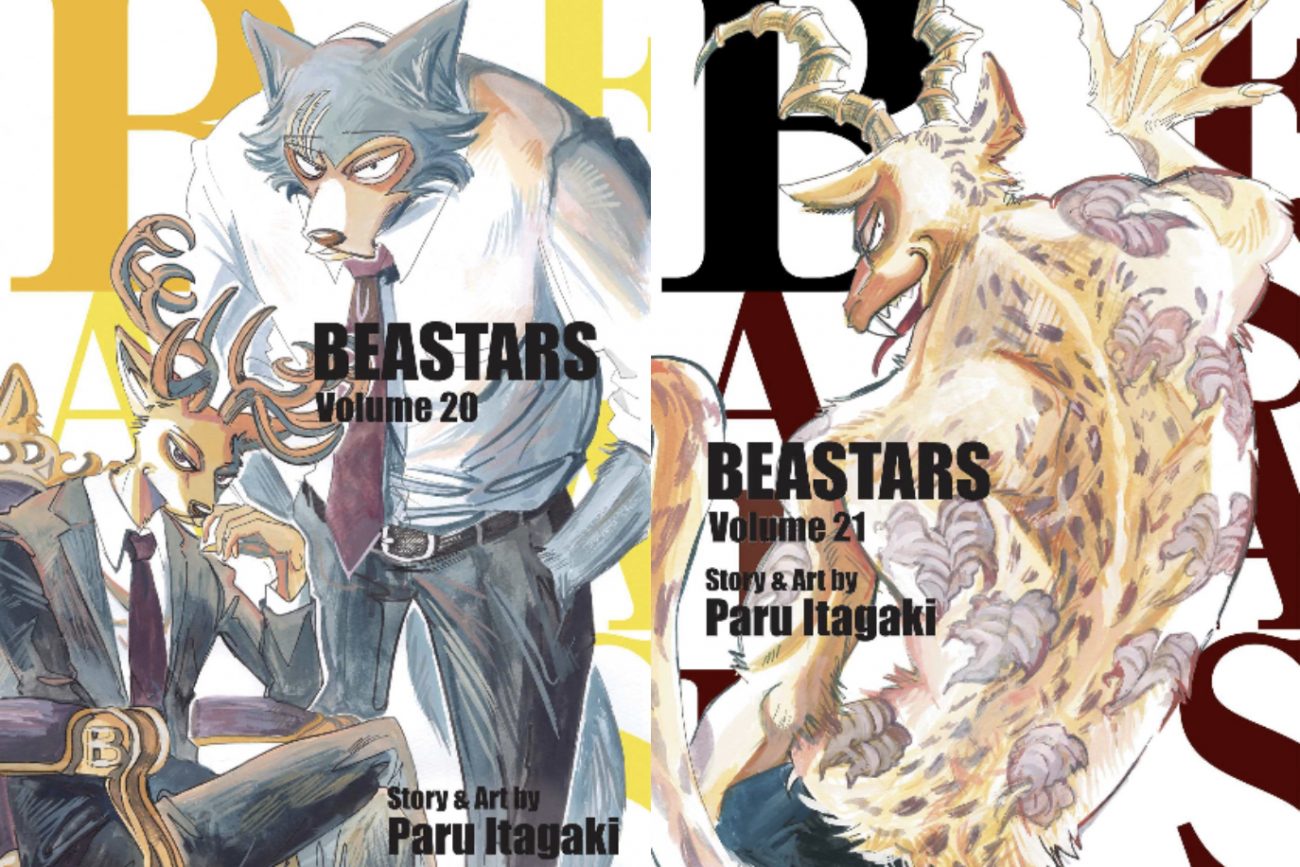 It is said that a carnivore is most dangerous when they’re hungry. Such a belief is what pushes Legoshi is go to extra lengths to train for his battle with Melon. But as we see in the twentieth volume of BEASTARS, there are other things that motivate him for battle. And as corny as it sounds, it’s deep friendship and love that’s the core of Legoshi’s strength.

Thinking more outside of the box, Legoshi pushes himself to train more alongside Kyu. Unbeknownst to the wolf, the rabbit has been selling intel of his training to Melon. However, Kyu could care less over who wins the fight overall, as she has her own plans to better her life. That push to better herself is all thanks to Legoshi, whose means of taking her down in training made her see what awaits in the afterlife. 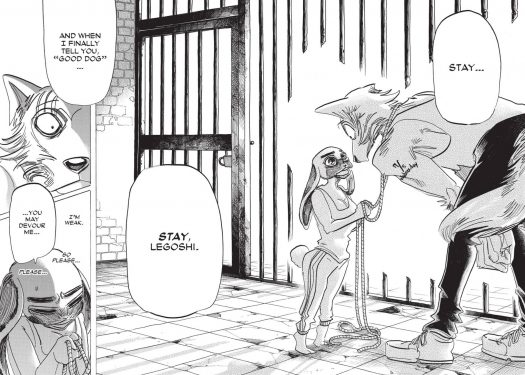 Meanwhile, Haru is anxious to see Legoshi on her final Rexmas (yes, dinosaur Christmas!) as a teen. He tells her to run due to his hunger pains, but the rabbit’s want to see him overpowers her fear of being eaten. It leads to a playful chase in the streets, leading up to a moment that Haru has probably been waiting for since Legoshi rescued her from the Shishi-gumi. But will this moment cement a future for the two of them? That remains to be seen.

But BEASTARS pulls a heart-stopping moment when Louis goes missing. On the day he’s supposed to talk to the press about leading the company, Legoshi’s apartment is filled with the blood of a horned mammal. What winds up happening is a mixture of gruesomeness and sweetness, with Legoshi and Louis sharing a bizarre moment of bonding. It’s a situation that aims to give the wolf one more push before the next Happy Meat Day. 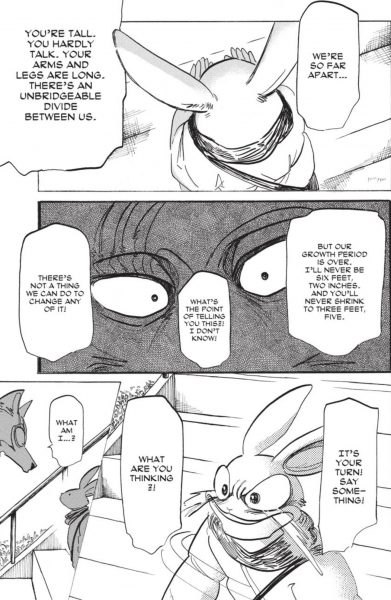 Finally, the day comes. Although Legoshi is supposed to fight Melon, he first has to deal with a few Komodo Dragons. As Yahya and Gosha watch from above, Legoshi fights tooth and tail when facing the Doku-gumi and its leader Savon. Body parts are ripped off, things blow up, and even the occasional Komodo Dragon saliva drips to destroy some buildings. While not on-par with Legoshi’s fight with Riz, it does offer a good dose of excitement.

However, that fight with Riz starts to pale in comparison when Volume Twenty-One arrives. Happy Meat Day continues as Legoshi battles it’s out against the foxy Inari-gumi. Gender roles in society play a role in the battle, with Legoshi going so far as to put on a dress & heels to even out the playing field. But even before their fight can conclude, Melon sticks his spotted-horned head in to give fans what they’ve been waiting for. 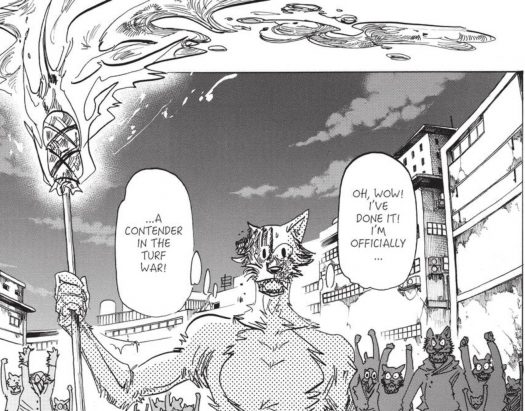 Not only does this fight represent Legoshi’s growth as a person, but about the society of BEASTARS in general. The fight doesn’t just spread throughout the factors, but also carnivores and herbivores start fighting one another. As the Beastar Yahya and Gosha look on, the two friends wonder whether or not this city is the same as what they grew up in. Society is crumbling all around, and all they can do is watch.

And then, a blackout hits. Tension runs high in the air, as herbivores now have a major disadvantage against the carnivores. One wrong sound or move, and blood will pour by the barrel-full. That’s when Yahya comes up with a simple plan, which causes mass conflict between every carnivore around him. Speaking of conflicts, there the thing that Louis’s in the midst of doing. 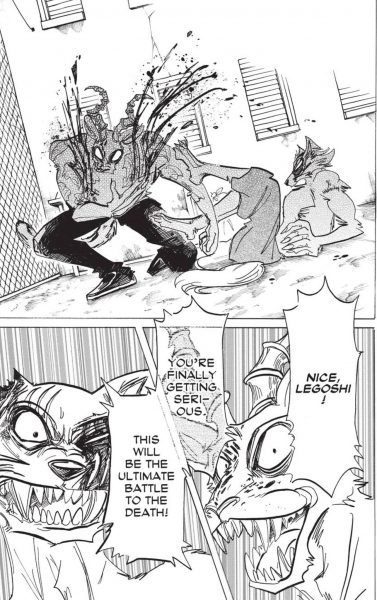 Him calling out the media for burying the black market is perhaps the bravest thing that deer does. Everyone panics over what he says, to the point where he’s literally pulled away from the cameras and into a locked dressing room. Fortunately, some old friends just so happened to be watching his speech, which leads to a delightful chase that brings just about everyone in the BEASTARS lore together. As Louis sees Legoshi battling Melon, a look of confusion befalls his eyes.

With only one volume of BEASTARS left to go, there’s a lot that can happen in this singular fight. Can Legoshi have a happily-ever-after with Haru, or will Melon make an example of him? Whatever happens in the finale of BEASTARS, it’ll surely change the fabric of both its people and society as a whole! Sharpen those fangs, dear readers… 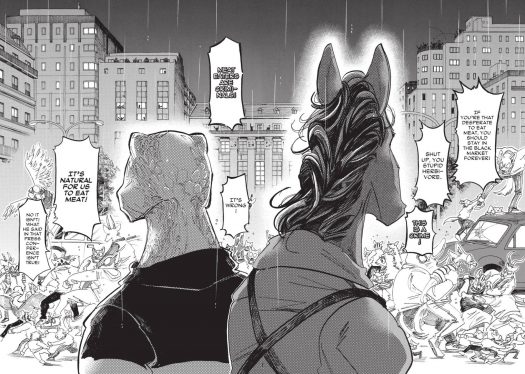