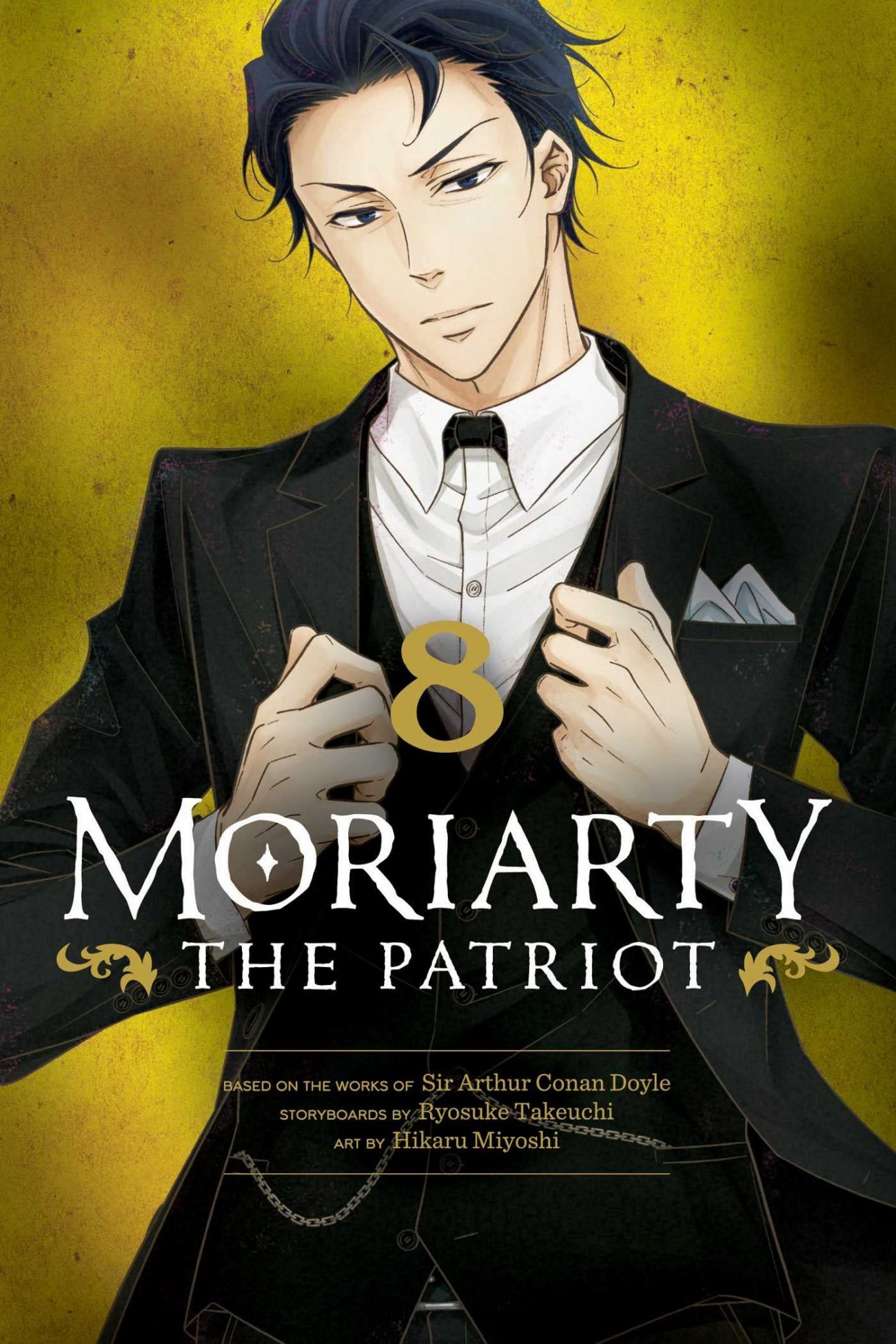 In the world of Moriarty the Patriot, there are two kinds of people: the corrupt and the principled. William James Moriarty dances between the line of both, with his corrupt plans being made for principled reasons. Although Holmes may somewhat agree with reasons behind the Lord of Crime’s means, a criminal act in the name of good is still a criminal act. It’s a realization that’s outlined well in the eighth volume of Moriarty the Patriot.

However, before the two chaps have a good chat, there’s still the matter regarding Jack the Ripper. After finding the people responsible for the killings, William and Louis take matters into their own hands in regards to dealing with them. Some arguments over what should be done in the name of good are presented, but William’s heart for the less fortunate is not swayed by those still tainted by greed. Without holding anything back, the brothers charge into a fight where the odds against them kind of play in their favor. 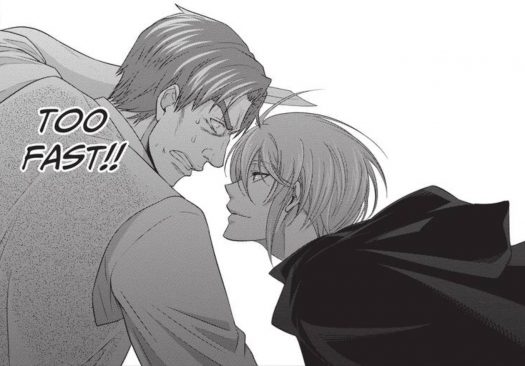 It leads into the next story, “The Riot in New Scotland Yard”, as someone is framed for Jack the Ripper’s crimes. A cop whose lost his noble ways is at the helm of the arrest, with Moriarty calling in Bonde to help get the innocent man out of jail. A visit to Que reveals some new high-tech weapons and gadgets, and after a night of drinking, Bonde gets tossed in jail to get closer to the innocent person. Per usual, Holmes and Watson are keeping a close watch on the current situation.

I’ll admit that while what happens in “The Riot in New Scotland Yard” is interesting, it’s bogged down by a lot of graining dialogue. The chats are normally an intriguing part of Moriarty the Patriot, as it gives readers the chance to see how these characters think. Here, I feel like it was stretching out a story just so it could fit two chapters. Once the plan does go into effect — and the crooked cop is placed into a confusing situation — the story gets better as it coasts toward a satisfying conclusion. 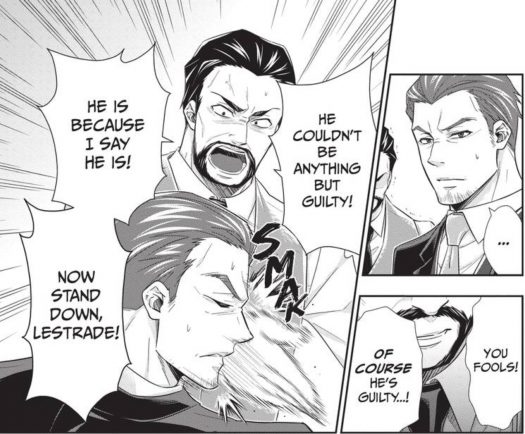 As talks go, “The Adventure of One Student” is where the dialogue is at its strongest. Holmes sits in on one of Moriarty’s classes, even playfully taking his exam. The two talk about the Lord of Crime and his Robin Hood-y ways, with Moriarty coy over Holmes’s deductions. Despite being on different ends of justice’s spectrum, it’s clear that the two admire one another, even if a fight between the two is imminent. (The story also manages to place some focus on a kid who has plenty in common with a certain Ben Affleck/Matt Damon movie.)

Volume Eight of Moriarty the Patriot finds the balance between necessary evils and divine justice. Even if Holmes and Moriarty will not see each other eye-to-eye, they at least have an understanding of how they handle the wrongs of the world. But will London change for the better once all the pieces have been played, or will Moriarty find himself looking at a city that’s itching to be burnt to the ground? Although the answers could be found in Sir Arthur Conan Doyle’s books, what would be the fun in that?! 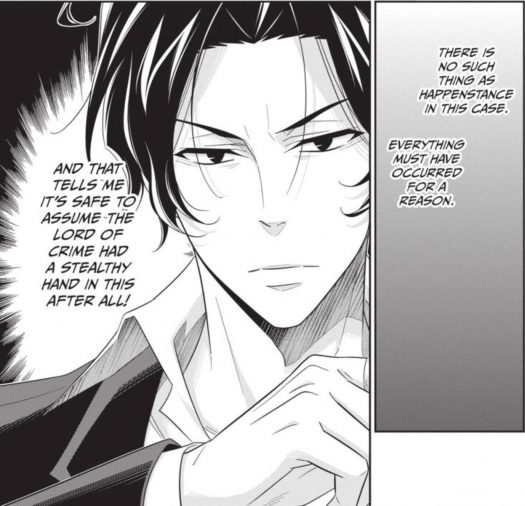 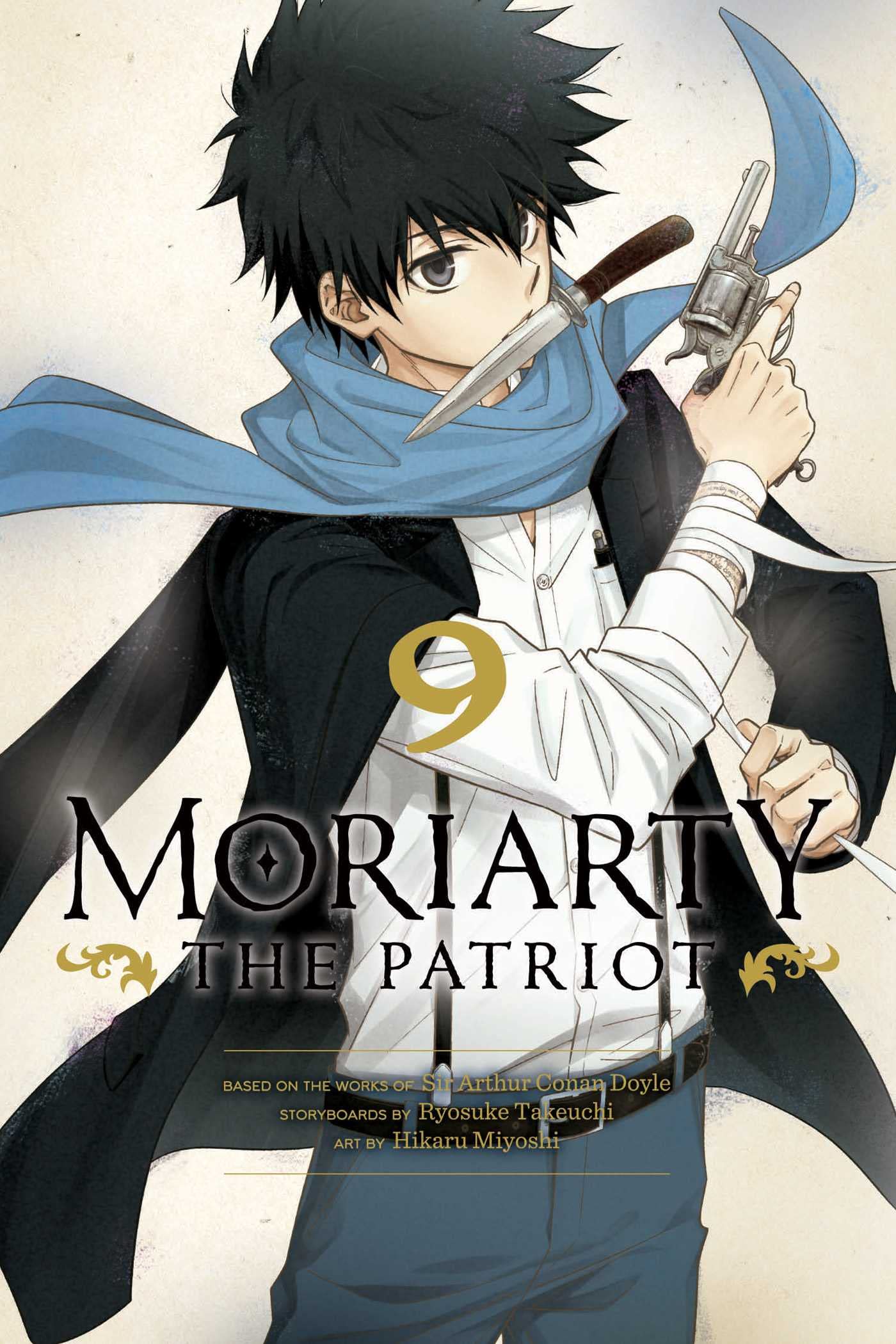 William James Moriarty is a man who plays chess five moves ahead of the others. The Lord of Crime is capable of plans that defy imagination and logic, with Sherlock Holmes the only man smart enough to go toe-to-toe with him. So with all of the talent and skill of a true mastermind, one would think that a mere tea party would be a walk in the park, right? As the ninth volume of Moriarty the Patriot shows, there’s nothing more chaotic than a plethora of ditzy, thirsty rich women!

“The Tea Party”, the opening chapter of this volume, places Moriarty and his crew in charge of a fancy shindig with many a noblewoman. Thankfully, like many of his more dastardly plans, William’s got a whole rundown on how this get-together will go down. Once everyone has their roles set, the ladies arrive with money in their eyes and rich hot guys in their noses. Thankfully, the right people are in the areas that are best kept secret from prying eyes, even if there’s a close call or two that blows Moriarty’s cover. 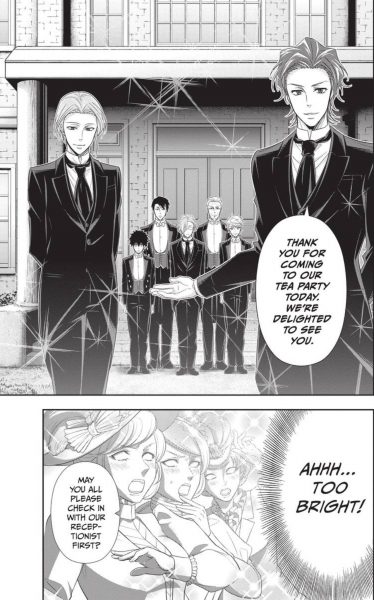 Considering how much admiration William has, it’s no surprise that there are women who’d clamor to be his bride. Their need for a quenching is no joke, as they swoon over every gentleman in their vicinity. Fred’s talent with gardening gets the women excited over the beauty he creates, while Jack’s more peppered appearance easily makes the ladies’ hearts beat faster. But it’s James who takes the cake, as they use their cool-handed mannerisms to keep a couple of troublesome gals from discovering any of Moriarty’s secrets. (Considering James’s real identity, it’s no surprise that they’re the best at handling women!)

A flashback to Moriarty’s youth takes hold of the two-parter “The Merchant of London”, which showcases Moriarty the Patriot at its most diabolically fun. Attempting to get money back from the orphanage from a Lord, William uses his and Louis’s own cash to buy the debt and give some extra to aid in the building of a new orphanage. Of course, Moriarty knows that the Lord has no intention of paying him back, which brings the contract dispute to court. What happens then, well, let’s have William say it: 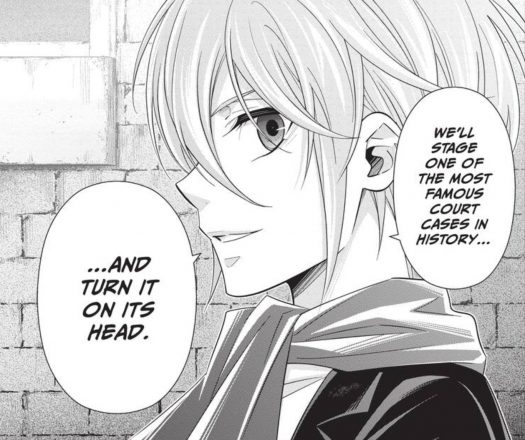 Using William Shakespeare’s famous play The Merchant of Venice as inspiration, Moriarty aims to get his debt back not via cash, but with flesh. It then becomes a game of wits as to how the debt must be settled. Does Moriarty make the Lord crack, or does the greedy fellow find a way to snake through the boy’s trap? It’s a situation that makes even the judge surprised, especially with how Moriarty handles himself back when he was a child.

We flash back to the present for the start of the next tale, “The White Knight of London”. Mr. Whitley, an up-and-coming MP, aims to give voice to every adult citizen of England. Of course, the rich folks don’t want that, so they do their best to eliminate him from the picture entirely. Seeing as Whitely’s goals line up with both Moriarty’s and Holmes, both men see him as a person of interest. However, it’s the one who controls the press that may seal the fate of Mr. Whitley. 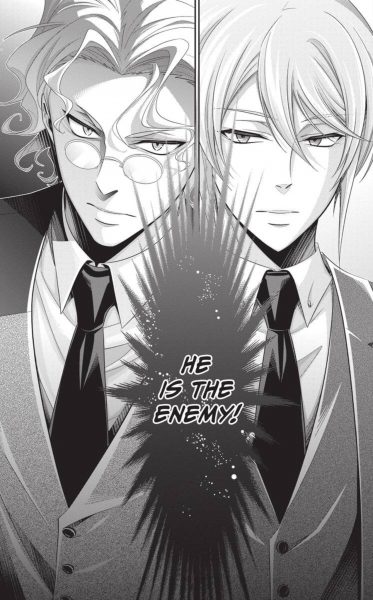 Moriarty the Patriot delivers plenty of what makes it a solid adaptation in Volume Nine. It knows when to be smart, when to be funny, and when to be diabolical. “The Tea Party” gave readers laughs, “The White Knight of London” looks to be another intelligent story, and “The Merchant of London” gives plenty of reasons to snicker demonically. Although we’ve yet to see how the Lord of Crime offers a hand in Mr. Whitley’s plans, we can rest assure that some rat bastard’s gonna get their comeuppance in the end!