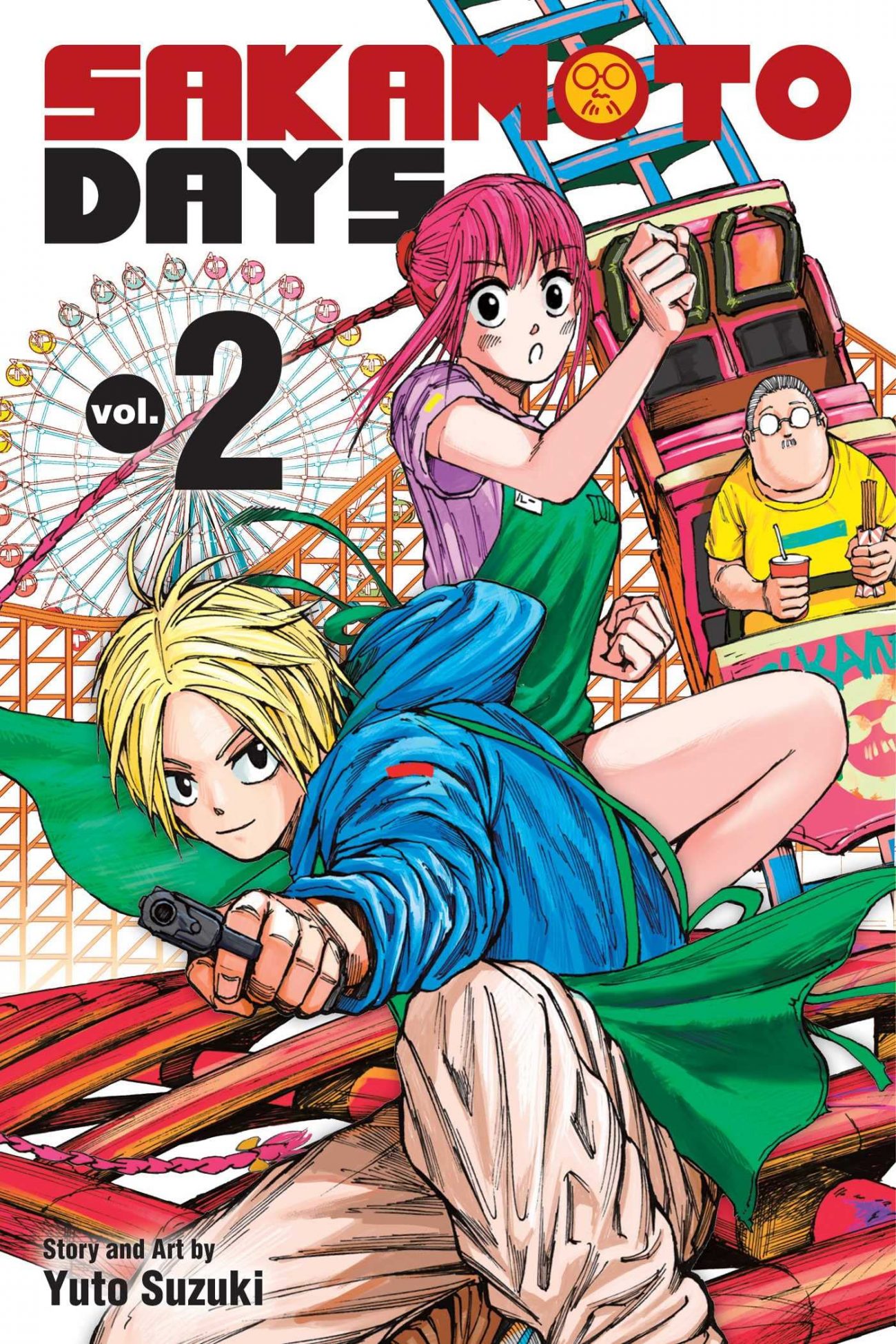 For thrills and chills, nothing beats a theme park. You have your roller coasters, haunted houses, and merry-go-rounds that bring plenty of joy for all. Unfortunately, when the Sakamoto family heads to a wonderland of fun, the rides aren’t the death-defying things that Taro, Shin, and Lu have to face. As the first Sakamoto Days left us hanging on to a tilt-a-whirl of suspense, Volume Two brings us back down safely from the ride, albeit with some scratches and mental scars.

A bounty now rests on the head of Taro Sakamoto, who aims to leave his assassin days behind. But a blast from his past arrives in the form of Boiled, his former ally in the business of death. Alongside Obiguro, the two infiltrate the theme park in search of Sakamoto, as Boiled has a grudge to deal with. Thankfully, Sakamoto has Shin and Lu on his side to not just help with the assassins, but also keep his family away from danger. 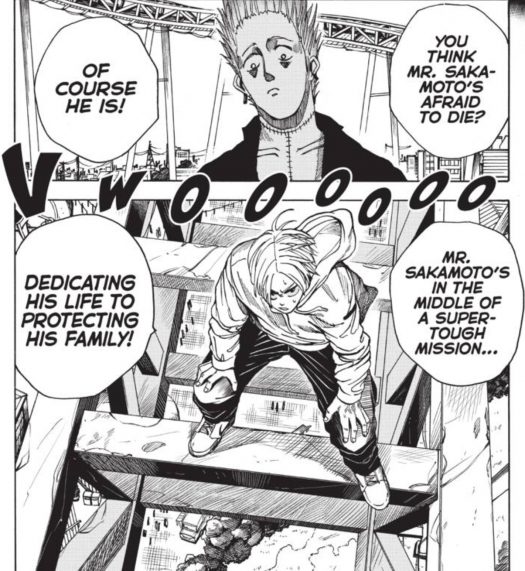 There’s a fantastic mixture of action and comedy when Boiler and Obiguro hit the scene. For starters, Boiler’s grudge isn’t one involving murder, but rather of a certain sweet that a dotting woman can offer a guy. It leads to a fight that’s literally explosive, taking place in the darkness of a haunted house. Meanwhile, Shin and Lu have to deal with Obiguro, with Lu using a good amount of liquid courage to get into the fighting spirit.

Boiler and Obiguro are a frightening pair, but it’s Mrs. Sakamoto who winds up being the most terrifying person at the theme park! Hilariously, she puts both her husband and Boiler in their places due to the chaos they unleashed. It’s a moment that plays a very important aspect in the Sakamoto Family code of honor, where telling lies is worse than taking a bullet. (Trust me, I know from experience!) 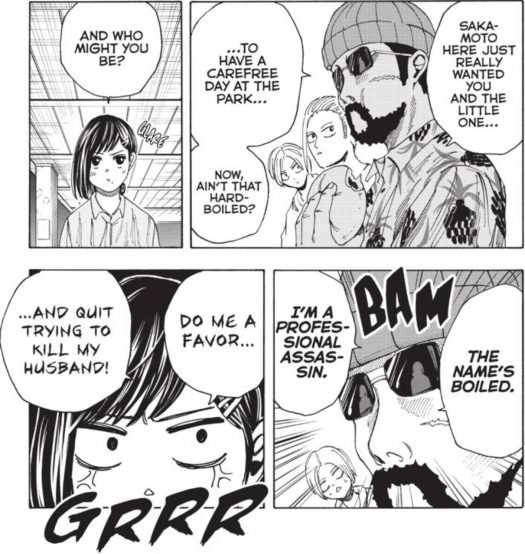 It all leads to Sakamoto Day's reveal of who’s behind the hit: an organization known as Dondekai. Sakamoto and Shin go full Die Hard infiltrating the headquarters, only to be greeted by yet another familiar (and thankfully friendly) face. But even when assassins aren’t on the menu, excitement still festers in the air when little Aoi wants a special backpack for school. And the result: well…imagine if Jingle All the Way was rated R!

After a wonderful debut volume, Sakamoto Days goes all guns in with Volume Two. Author Yuto Suzuki knows how to balance action and comedy perfectly, to the point where there’s an equal amount of both in every chapter. Sakamoto may not look like your average Shonen Jump protagonist, but this volume proved why he may be destined to be one of the famed magazine’s greats. At the very least, Sakamoto Days showcases why he’s one hell of a fighter and one hell of a father! 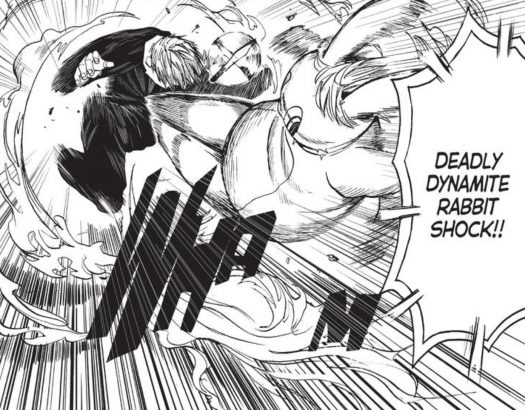 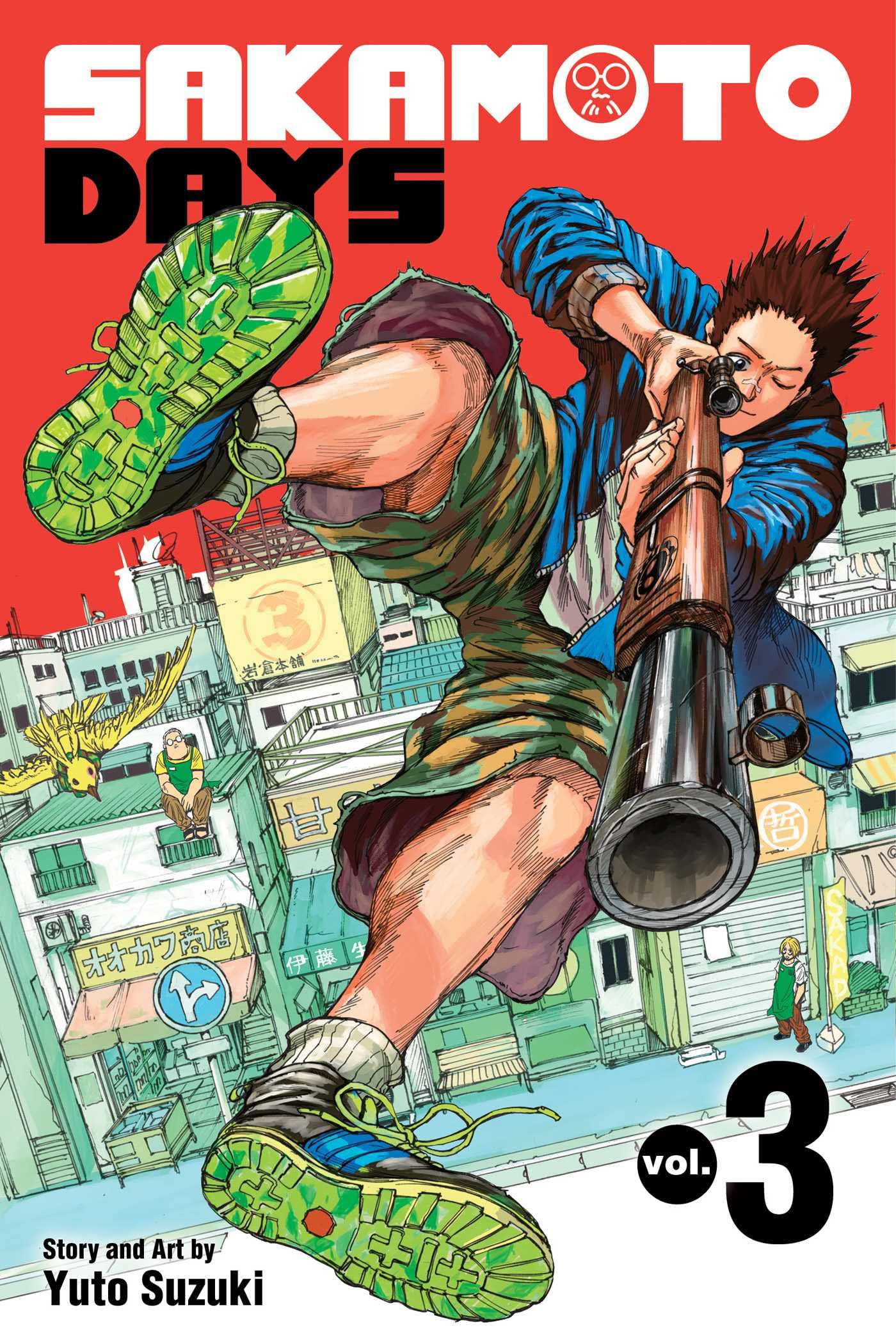 Unpredictability is key to a manga’s great success. Yuto Suzuki knows this well, as his series Sakamoto Days is packed with unpredictability. Even with its awesome John Wick-like nature, it’s in the comedic aspects where the best moments arrive in the least expected of ways. For example, I never would’ve guessed that Volume Three would have Sakamoto and Shin dress up as dinosaurs!

I’ll get to that part in a bit, as Sakamoto Days’s third volume begins with another assassination attempt. The down-on-his-luck Heisuke is down to his last few coins, and is itching to get a big break by taking down Sakamoto. But upon arriving at the convenience store, he can’t find the former assassin…even when staring directly at him! However, another moment to score some cash arrives via an Airsoft tournament, which he begs to be on Sakamoto and Shin’s team. It results in an impressive display of sniper skills, fun banter, and an accidental realization that Heisuke’s been chumming it up with his target all along. 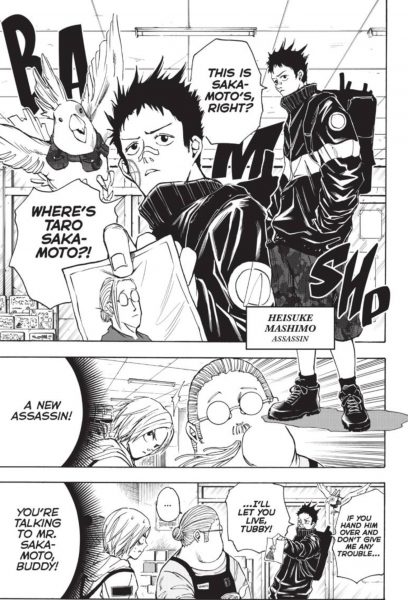 What follows is a display of Sakamoto Days at its action-packed best. With only a sprinkling of dialogue here and there, the fight between Heisuke and Sakamoto & Shin tells more about these three’s skills than any long monologue ever could. From the way Suzuki angles his drawings to the sheer level of intensity on display, this fight demonstrates why this manga has become a quick favorite in the scene. All of it ends on not just a high note, but a pretty damn good punchline!

Which now leads to the second half of this Sakamoto Days volume, as Lu is kidnapped when she’s thought to be Shin. The mistaken identity does lead to some good laughs, on top of an impressive fight thanking place in some high-speed traffic. But when we find that all of this is connected to Shin’s past, the stakes to save Lu reach higher levels. That’s when Shin leads Sakamoto to his former lab residence, conveniently hidden below a run-of-the-mill museum. 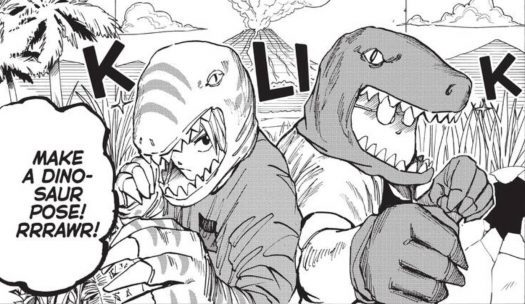 And this is where the dinosaur stuff comes into play. In order to blend in, Sakamoto and Shin must pretend to be average museum patrons. After posing in dinosaur gear, the two seek out the hidden entrance to the lab. Still wearing the dinosaur stuff, Shin and Sakamoto face off against an animatronic bear that gives them some trouble. But what could cause these two to sweat even more so? Well, how about a Goddamn T. Rex?!

Meanwhile, the truth behind whose running the labs brings out a solid backstory about Shin. It gives the realization of how hard he had it as a young kid, as he dealt with his new powers and the lack of trust from the other scientists. While not exactly a moment of pity for one of our heroes, it does give readers a solid understanding of why he has that personality of his. 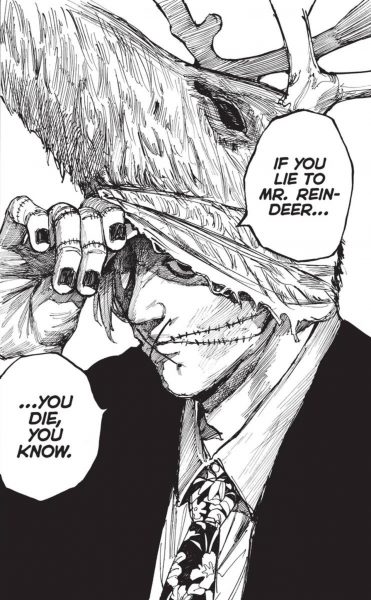 Volume Three of Sakamoto Days delivers plenty of great action and solid comedy. The addition of Heisuke may seem like the cast is getting as bloated as, well, Sakamoto himself, but his mannerisms are a nice change of pace for this series. On top of that, readers are treated to a nice blast from the past via Shin’s origin tale. But you know who might not be so nice? The one they call “Mr. Reindeer”…