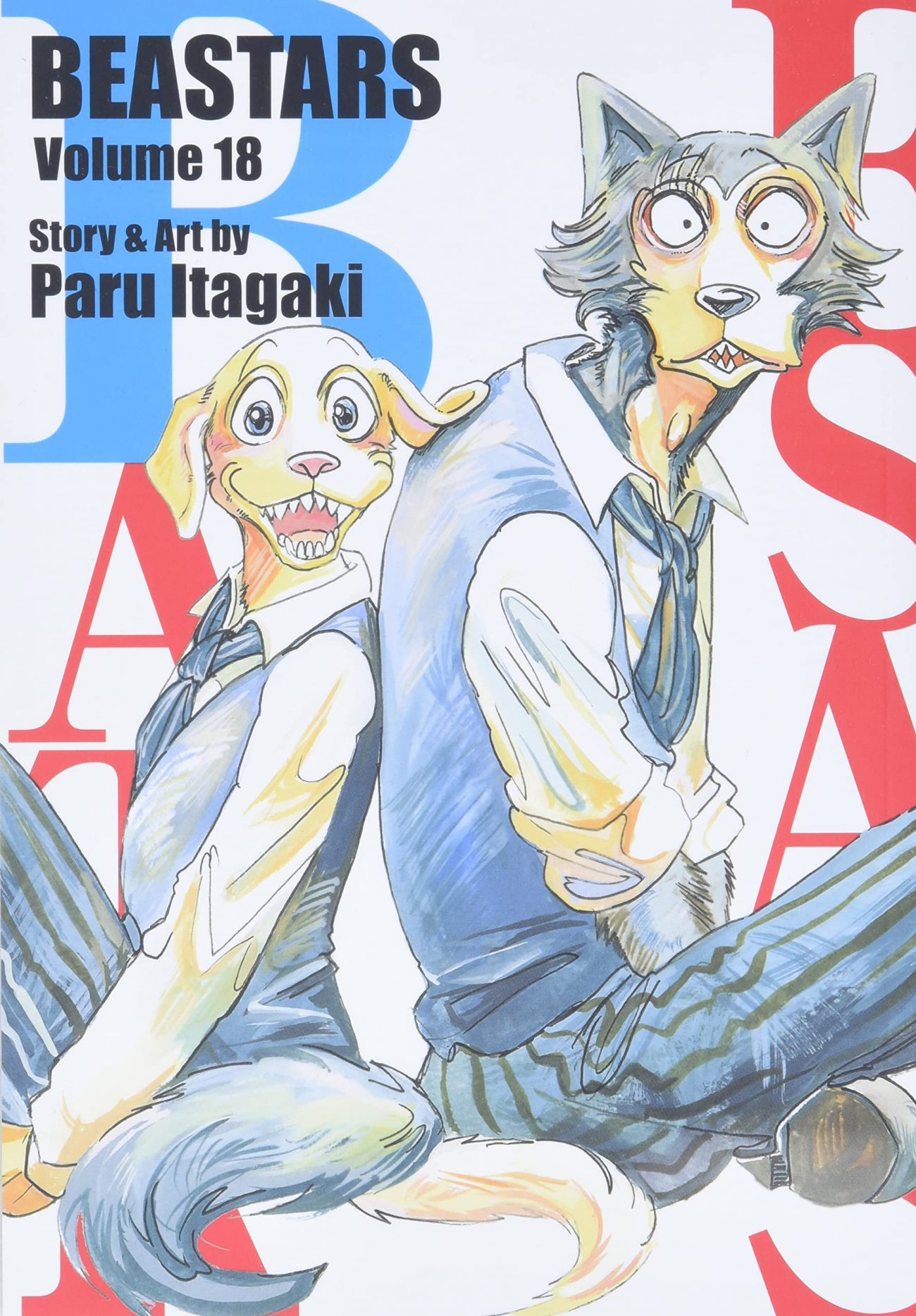 Since the dawn of time, carnivores and herbivores have been the strangest of frienemies. Sometimes the strong meat-eaters will help the weaker plant-eaters, be it with small tasks for big fights. But when hunger strikes, a carnivore can just as easily eat their herbivore ally, especially if the cravings are too much to handle. BEASTARS has showcased this weird partnership all throughout its series, even as carnivores attempt to keep their meaty needs down to a whisper. But the streets are about to rain blood, with Melon’s influence overtaking the Black Market.

In its eighteenth volume, BEASTARS attempts to bring the past of its world to light, as well as show what could be a grim future. Since Jack takes advanced classes, he reveals to Legoshi the real truth about the history between carnivores and herbivores. These facts make Jack worried about the sort of future he and his canine cohorts would create, as they’re created to be loyal. After a much-needed cry, Legoshi reaffirms Jack’s kindness and their friendship with a symbolic howl. 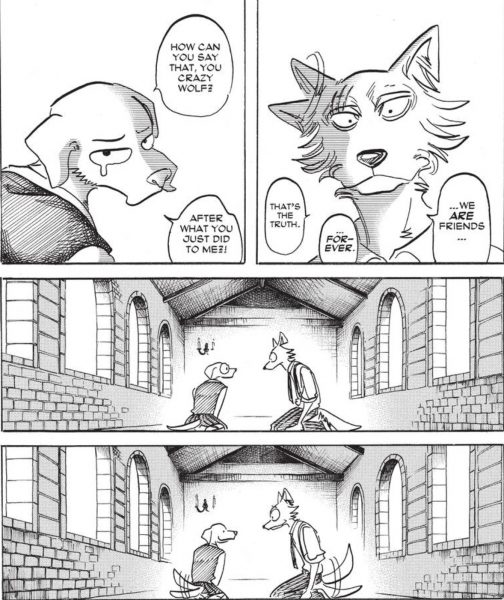 Back at the Black Market, things feel a little too civilized for its own good. That all changes on Happy Meat Day, when the four most powerful groups initiate a turf war. However, the battle never commences, as Melon takes a blade to his Shishigumi cohort and shocks the entire Black Market. His words scream of chaos and anarchy, in ways that dive deep into the souls of these carnivores.

At that moment, the dangers of the Black Market return, only more amplified! Of course, danger has always been around in BEASTARS, ever since Tem died in its first volume. However, author Paru Itagaki is showcasing how one single incident can snowball into a major clusterfuck. This is evident in how the classes at Cherryton Academy are separated between carnivores and herbivores. 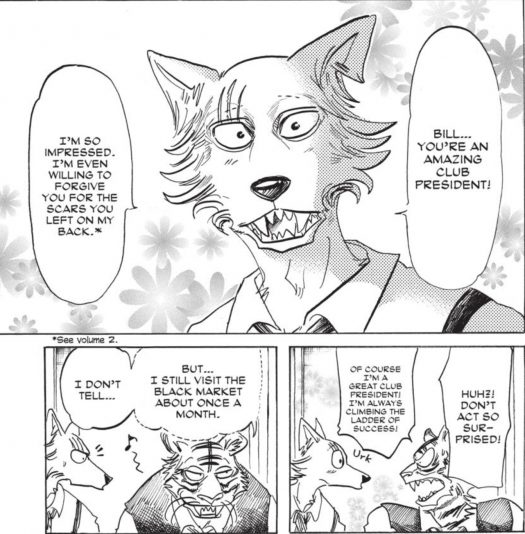 Thankfully, the unlikely class president Bill is the one that manages to keep his close carnivore and herbivore allies in check. Although he’s still a regular at the Black Market, he aims to better his school surroundings by being actually responsible! There’s also a humorous change in perspective when Bill deals with a trauma egg when he’s about to eat. Not only does he show how much he’s grown, but also showcases why Louis chose him to take over in the first place.

But what of the former president? After a dream about the play Adler, he takes it upon himself to dive deep into the Black Market. As usual, Legoshi finds him, giving the deer the opportunity to show where he was once held as future food. But after a hearty chat about taking down Melon, the deer and wolf tumble down and discover two people from Louis’s past. 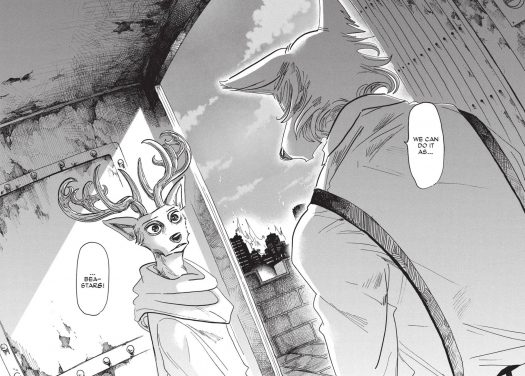 This face-to-face makes Legoshi realize his strength hasn’t peaked yet. On top of that, his thing for rabbits takes a turn for the, um, confused? That’s when the concept of imaginary chimeras come into play, and if this isn’t Itagaki attempting to bring Stands into the BEASTARS world, then…no, this is absolutely a JoJo reference! But who cares when the moment delivers something both funny and powerful!

Volume Eighteen of BEASTARS begins to lay out what could be its endgame. It’s a presentation of how this story has evolved since its beginnings, and how both carnivores and herbivores constantly go back-and-forth between evolving and devolving. Can Legoshi and Louis take down Melon and bring order back to their world? If actual world history has taught us, peace only arrives after war becomes tiresome. Well…either that or a giant whale comes around to say the right thing at the right moment. 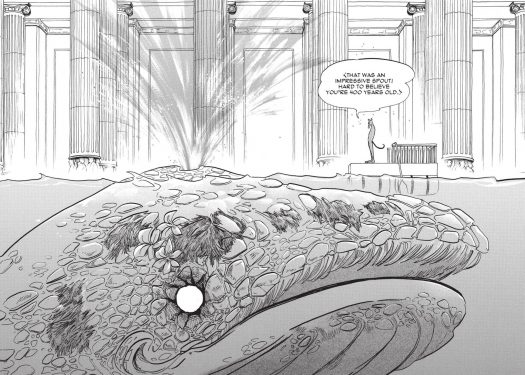 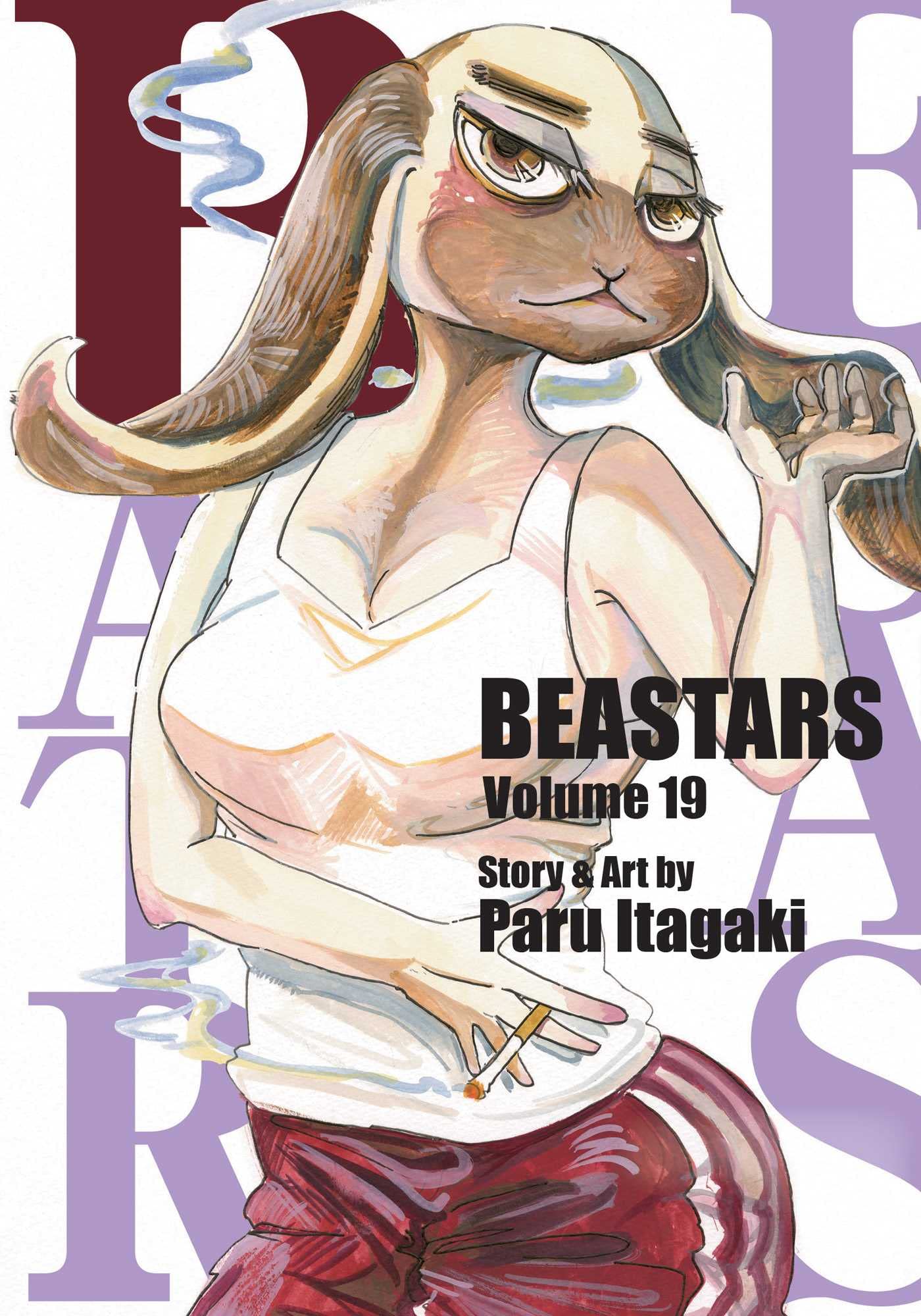 With Melon having control of the Black Market, Legoshi and many herbivores have become rather nervous. As days go by, the world of BEASTARS becomes a lot more dangerous. It’s why Legoshi has to summon up the courage to fight Melon one last time, nearly a year since he fought Tem. But first, the wolf needs to get a little extra training, in the form of one tough bunny.

After meeting Louis’s old friends/prison-mates, Legoshi begins to do a little training with the female rabbit Kyu. What begins as physical training transforms onto mental ones, as Kyu points out the wolf’s weaknesses when it comes to women. The moment signifies how much work Legoshi needs to do in the field of love and gender equality, the latter of which is what’s keeping him from going full-out on his sparring partner. Of course, it gives Kyu a chance to tease Legoshi hardcore, to the point of the rabbit attempting to castrate the teen. 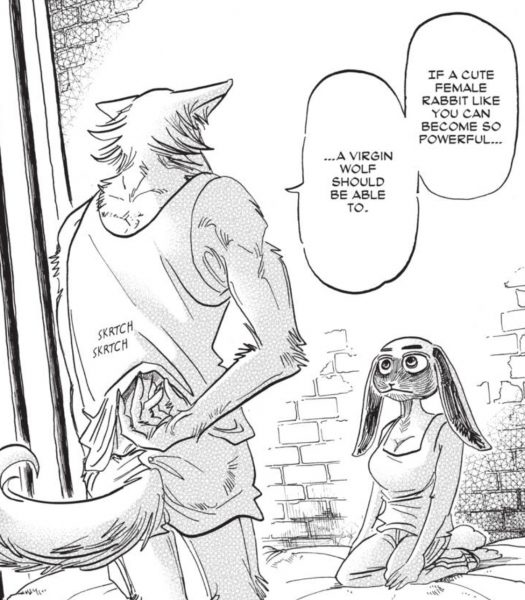 Meanwhile, Melon’s back story is brought into focus, with fond memories of his mother transforming into one drenched into blood. With the next Happy Meat Day approaching, Legoshi comes to challenge Melon to a brawl. But before he can even do that, the wolf and hybrid face off in a battle of the minds! One didn’t expect a quiz show to arrive out of the blue, yet at the same time I reckon said impromptu quiz shows occur regularly in Japan.

It’s not all physical and mental battles in this volume of BEASTARS, as Louis experiences a heavy tragedy. More weight is placed on the young deer’s shoulders, with the pressure being almost too much to bear. Fortunately, he just so happens to run into Haru, whose mere presence gives him a sense of serenity. However, she reveals to him a promise she made to Melon, one that sends shivers down Louis’s spine! 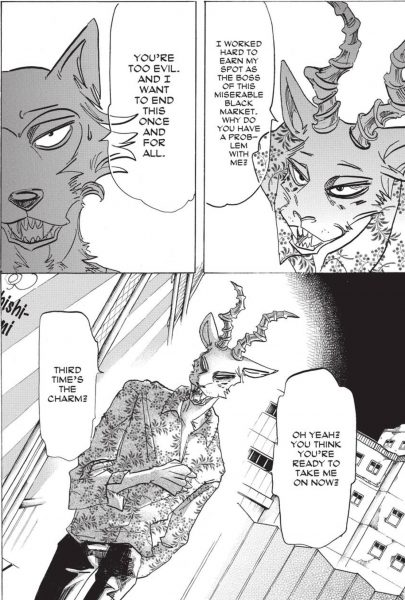 At that moment, Legoshi’s battle with Melon isn’t just a fight to keep the herbivores calm; it’s a fight to save what’s near & dear to his heart. While he’s no stranger to rescuing Haru from predatory danger, Melon has become a far greater threat than the Shishigumi itself! While Kyu claims love weakens a person’s judgment, Legoshi demonstrates that it can also be a source of great strength. This becomes apparent near the end, when the wolf keeps Kyu from attempting a date night sabotage of sorts.

But not everyone is keen of Legoshi battling Melon. The current Beastar Yahya has a one-on-one with Gosha, who reacts to the news…well, not quite well. It’s surely a bad sign when one can’t control their poison glands, with a single drop burning a few stories down. Perhaps it’s a hint of what’s to come in the near-future, as a tiny drop of something evil can turn the tastiest of life’s hot pots into a realm of death. 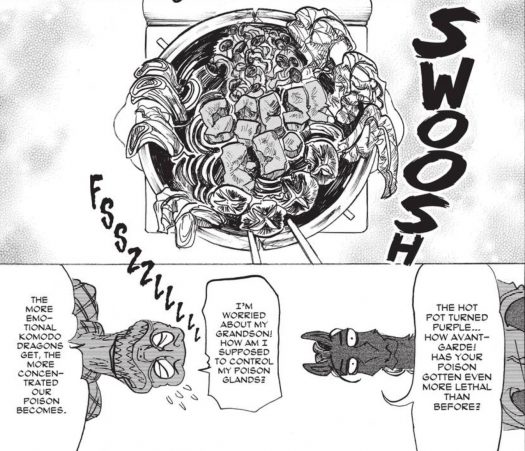 The feeling of BEASTARS’s nineteenth volume is one of preparation. Preparing for battle, preparing for the future, and even preparing for death are what Louis, Haru, and Yahya are going through. But only Legoshi is walking the path of all three, as Christmas is the day of his next/final chapter. Needless to say, the anticipation for this showdown will make any reader’s tail wag, be it nervously or excitedly.