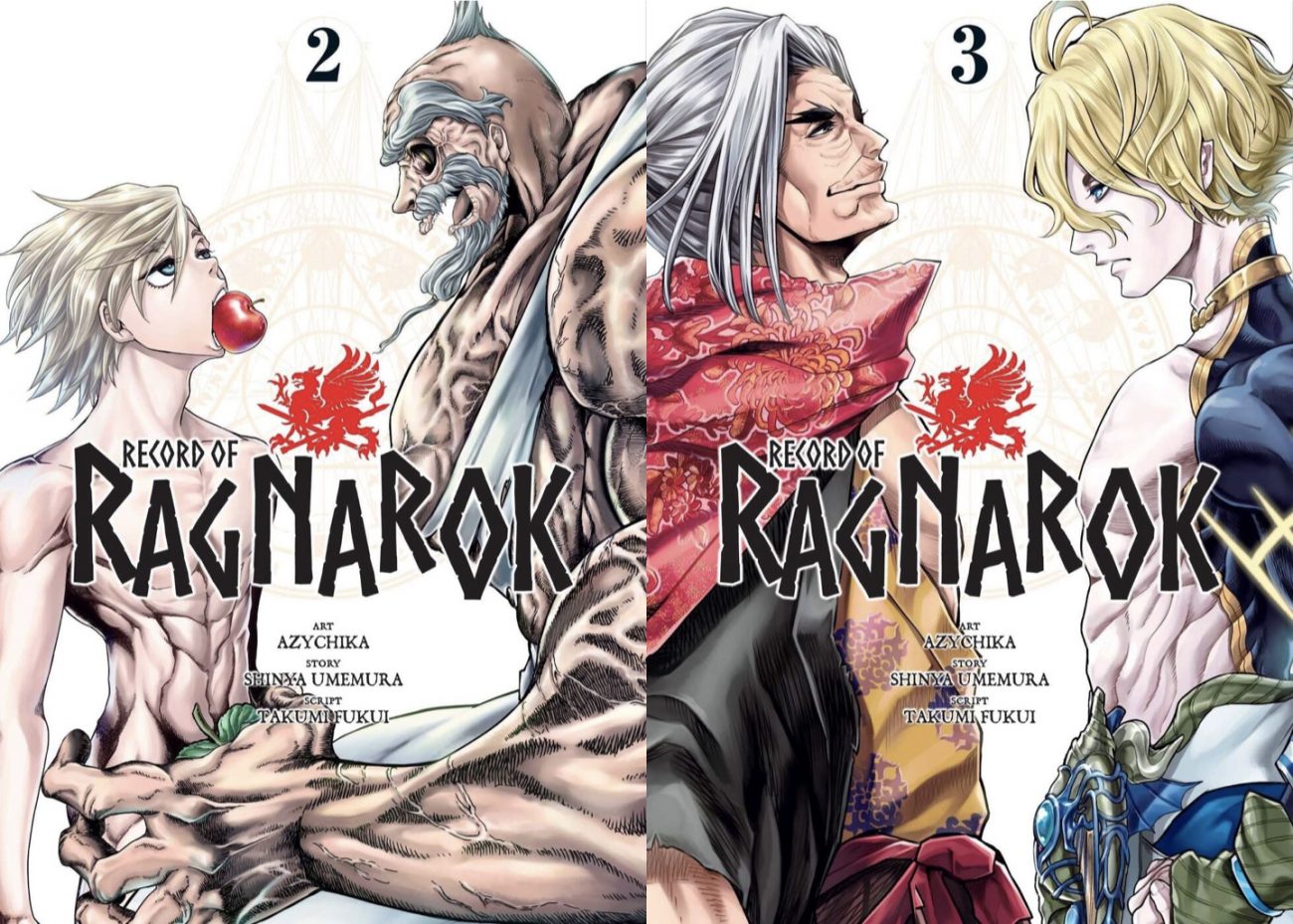 How can one top the badassery that is Record of Ragnarok? The mere concept of the strongest gods against the strongest humans would give anyone dopamine highs and adrenaline pumps. Its first volume started off on a great note, with the beginning of Thor and Lu Bu’s battle. In Volumes Two & Three, we get the end of that fight, alongside one colossal father/son face-off!

Thor and Lu Bu continue trading blows, with the God of Thunder in shock of how resilient the mightiest warrior of China is. But things already look written in stone, as Lu Bu is forced to call in a wild (horse) card into the battle. The final blow takes the stadium by surprise, as both fighters find themselves satisfied with the way things end. Sadly, not everyone in the crowd is happy, as they run onto the battlegrounds towards an inevitable massacre. 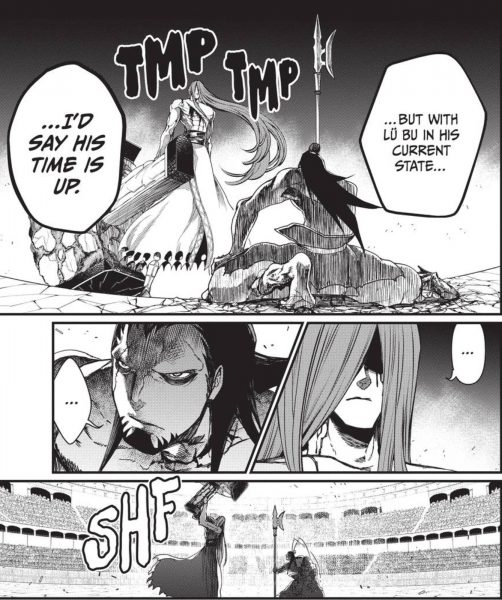 That’s when the second match gets on a roll, as original human Adam takes on Zeus himself. At first, one would easily think that Zeus would have the upper-hand, making quick work of Adam. However, as Zeus made Adam in his own image, that also means he contains his fighting prowess and — quite possibly — his strength. Thus commences one truly intense fight to the death, one that’s been waiting to occur since the final words of Genesis was penned!

The thing that makes Record of Ragnarok work so well is its presentation. While the story can drag its feet a bit when it comes to its flashbacks, it’s when we return to the fighting circle where this manga shows its teeth. (And boy, does artist Azychika know how to draw some disturbing smiles!) There have been may a fighting tournament manga in the past, but here is where I can truly feel every punch, smash, and even supernatural power that’s on display! 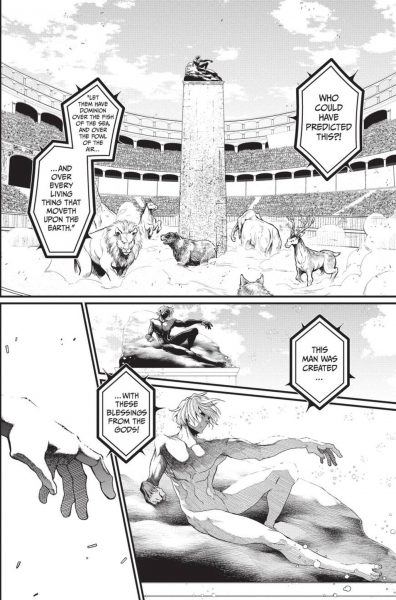 Unpredictability is also a strong reason why this manga easily pulls readers in. Even when Lu Bu’s on his last bit of strength, the narrative still manages to make you believe that some sort of miracle will happen. After all, this is a tale where the gods are the villains, so why would villainy come out on top in its first round. Yet when you see Thor literally smash Lu Bu’s face into nothingness, you realize quickly that Record of Ragnarok isn’t going to play by the average shonen manga rules!

This leads me to the next fight: Adam Vs. Zeus. The very idea of the Old Testament’s first human trading blows with the king of Greek gods would make any theologian scholar salivate with glee! Those first few blows — which are slowed down to the millisecond — give way to what will transform into a truly spotlight-worthy fight. Even more killer is the fact that Adam seems to have the upper-hand in the beginning, one armed with some deity-bashing brass knuckles! 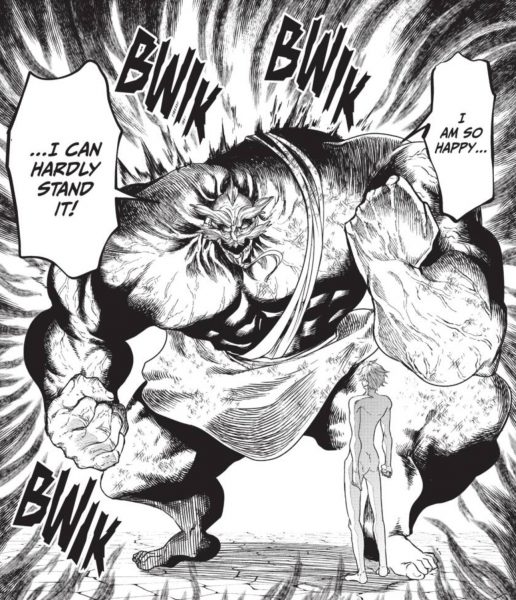 In the third volume, Adam & Eve’s back story is put on display, and it’s nothing like the Bible would ever lead you to believe! A serpent takes to the courts to try to cast Eve out of Eden, with his evidence being an apple with a fanged bite out of it. It leads Adam to commence an act in the name of love, as he bites and spits out the knowledge said apples claim to give. The moment’s cherry-on-top is what Adam does to the serpent, with his revenge being one that’d make any reader grin ear-to-ear.

But the real meat in Volume Three of Record of Ragnarok is in Adam and Zeus’s fight. God and Human #1 trade blows in a way that’d make Super Saiyans jealous of the power that’s on display. As Adam has the ability to copy any move before it’s fully commenced, it would appear that he’d have the upper hand. However, despite having a better strategy, a human’s strength still can’t outmatch a god’s. 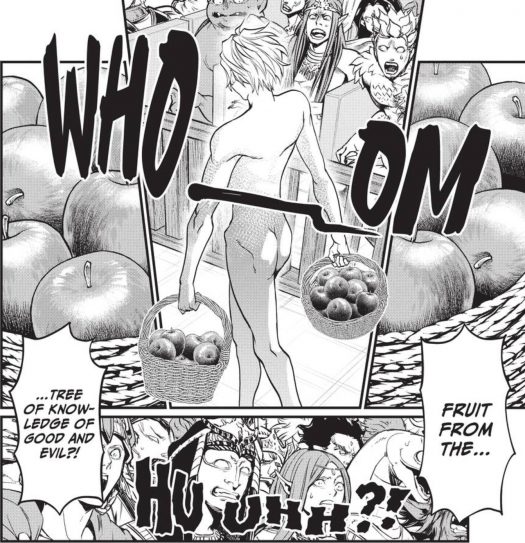 Zeus and Adam’s fight comes down to the wire, as the gods can’t believe the level of tenacity of the human. Every person in the stadium is on their feet, as all the faiths come together to support Adam. The world’s first human keeps the fight going, as his eyes bleed to the point of blindness. Even as Zeus takes the lead in the fight, Adam still won’t back down. It all leads to one final punch, one that shatters the heavens to smithereens!

Even as the second fight ends, there’s no time to take a breather. Fight Number Three is on everyone’s mind, as Poseidon takes to the stage. Hilde needs to pick the right person for the fight. Sure enough, the perfect man for the job arrives…albeit in a condition that makes his skills somewhat questionable. However, his mannerisms and history isn’t as flawed as they may seem. 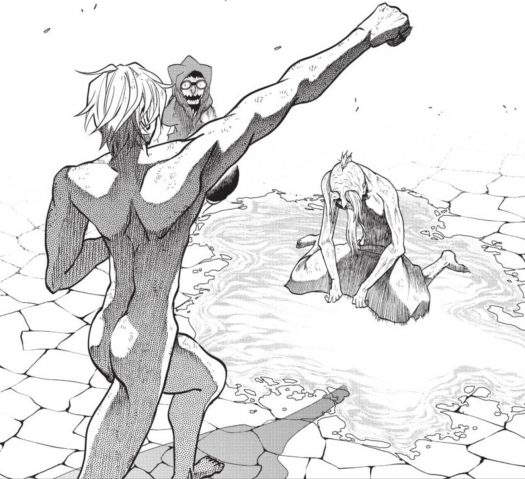 Round Three of Record of Ragnarok is about to get started, and the world sits at the edge of its seat. These two volumes drenched its pages with blood, sweat, and tears, all for the readers’ entertainment. But can the world put its trust in a man who has been dubbed “humanity’s greatest loser”? Well, that’s the funny thing about fights: sometimes it takes plenty of losses before a major victory can be achieved…