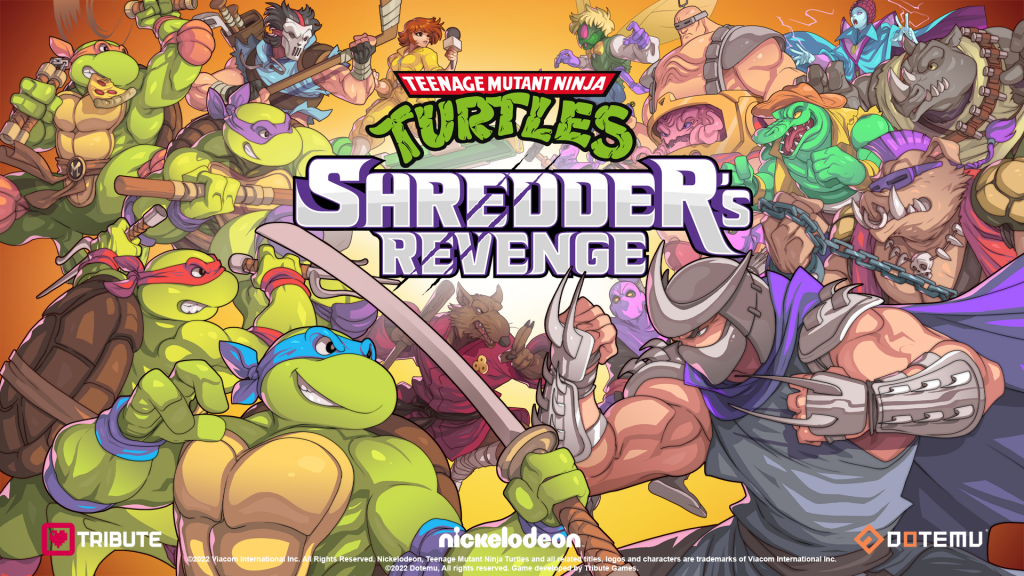 Much of my single-digit years were spent in some Papa Gino’s or Pizza Hut burning the roof of my mouth with the finest slices of cheese pizza around. But as a young kid, impatience was a given. Thankfully, many of those pizza joints had the ultimate arcade machine to pass the time: Konami’s Teenage Mutant Ninja Turtles. Even to this day, this side-scrolling beat-em up is by all means a classic, a showcase of how one should properly create a licensed video game property.

DotEmu and Tribute Games’s follow-up, Teenage Mutant Ninja Turtles: Shredder’s Revenge, continues on with the tradition of its predecessor, and then some!

Like the original game, Shredder’s Revenge takes place in the same universe as the original 1987 animated series. The story begins with Rocksteady and Bebop taking over Channel 6 news, threatening to give the Statue of Liberty a new makeover. Not one to let evil conquer New York City, the Ninja Turtles, April O’Neil, and Splinter emerge from the sewer to kick some tail! And then, the fun begins! 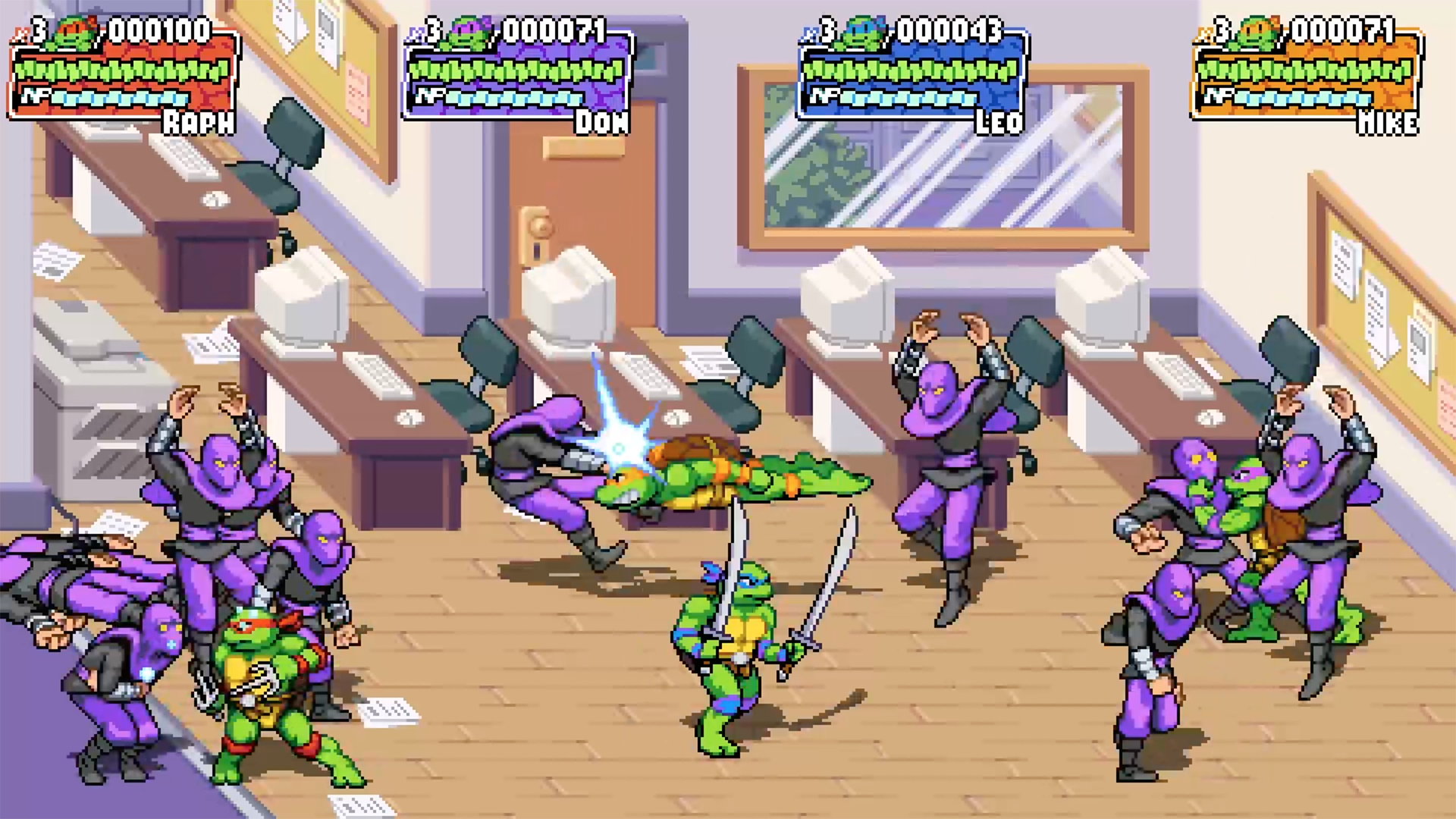 Up to six players at a time can play in either Story or Arcade Mode. The former is modeled similarly to Scott Pilgrim Vs. The World, with a large map featuring the level layouts. Players can revisit past levels, as they attempt to complete challenges or find hidden items, collectibles, and even some interesting cameos. But if you want to go old-school, Arcade Mode will have you play all sixteen levels nonstop.

Much of Shredder’s Revenge stays true to the original arcade game. Its beat-em up mechanics are pretty much the same, albeit with some upgrades. There are single-player and team combos, many of which showcase the attitude of the Ninja Turtles with glee. Beating up enough Foot Soldiers or robots will also give you some extra powerful attacks, with one major Radical maneuver that’ll make you the supreme shelled reptile of the game. 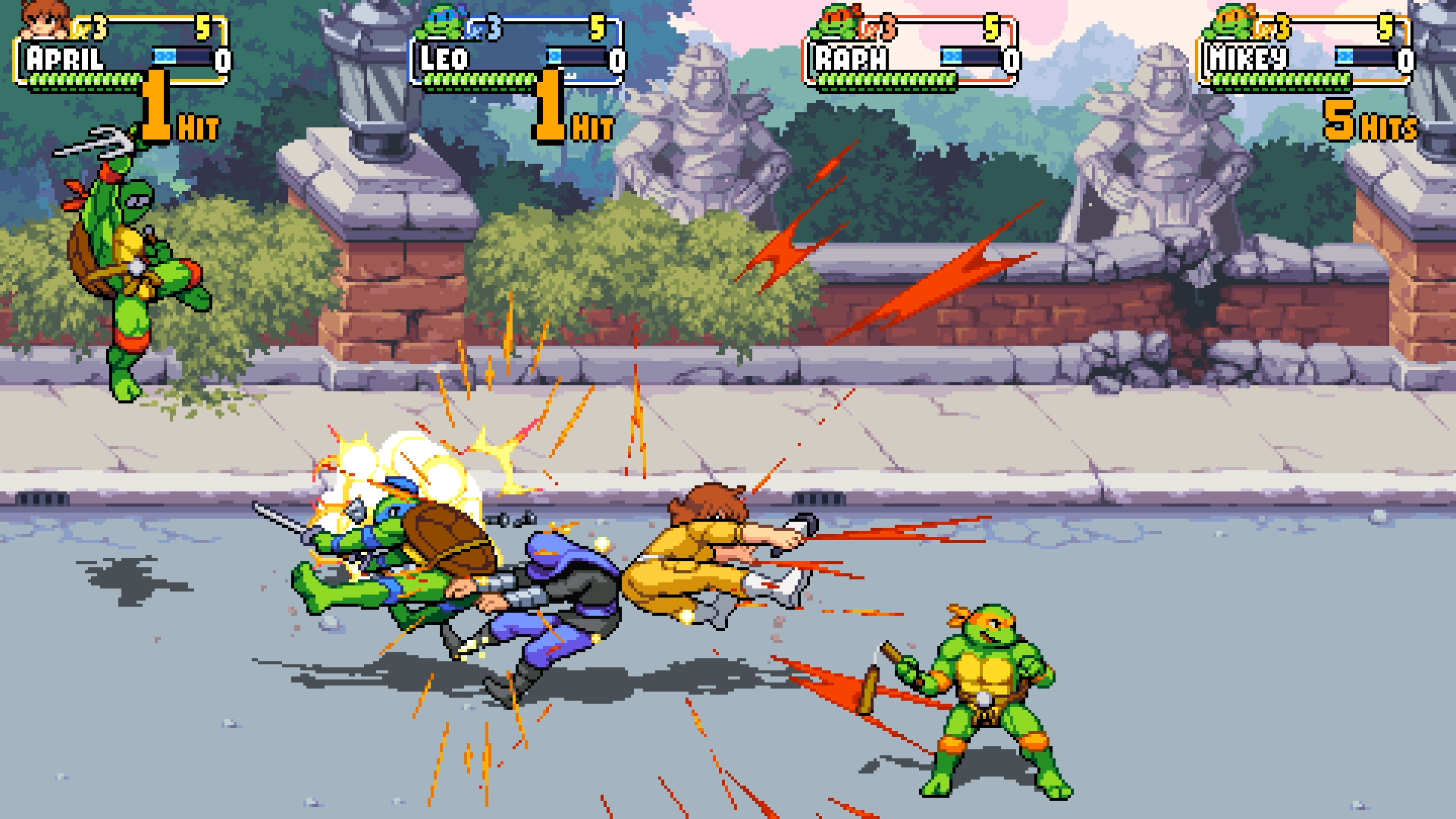 As you play, your heroes can level themselves up with new attacks, combos, and better health, which will come in handy for later levels. However, this is where the game’s only big flaw comes into play. Unless you play the levels over and over again for a few hours straight, you won’t reach your character’s true potential. Even gaining the ability to initiate a Radical attack won’t be unlocked until reach the highest level, and I managed to beat the game before I even got halfway to that point!

Everything else about Shredder’s Revenge is — in a word — tubular! Each Turtle, April, and Splinter have their own fight styles and mechanics, with some attacking stronger while others are speedier. Combos are a blast to watch unfold, as Tribute Games does a solid job keeping to the pixelated style of the original Konami game. Whether you play alone or separately, this game offers plenty of fun all throughout its three-hour runtime. 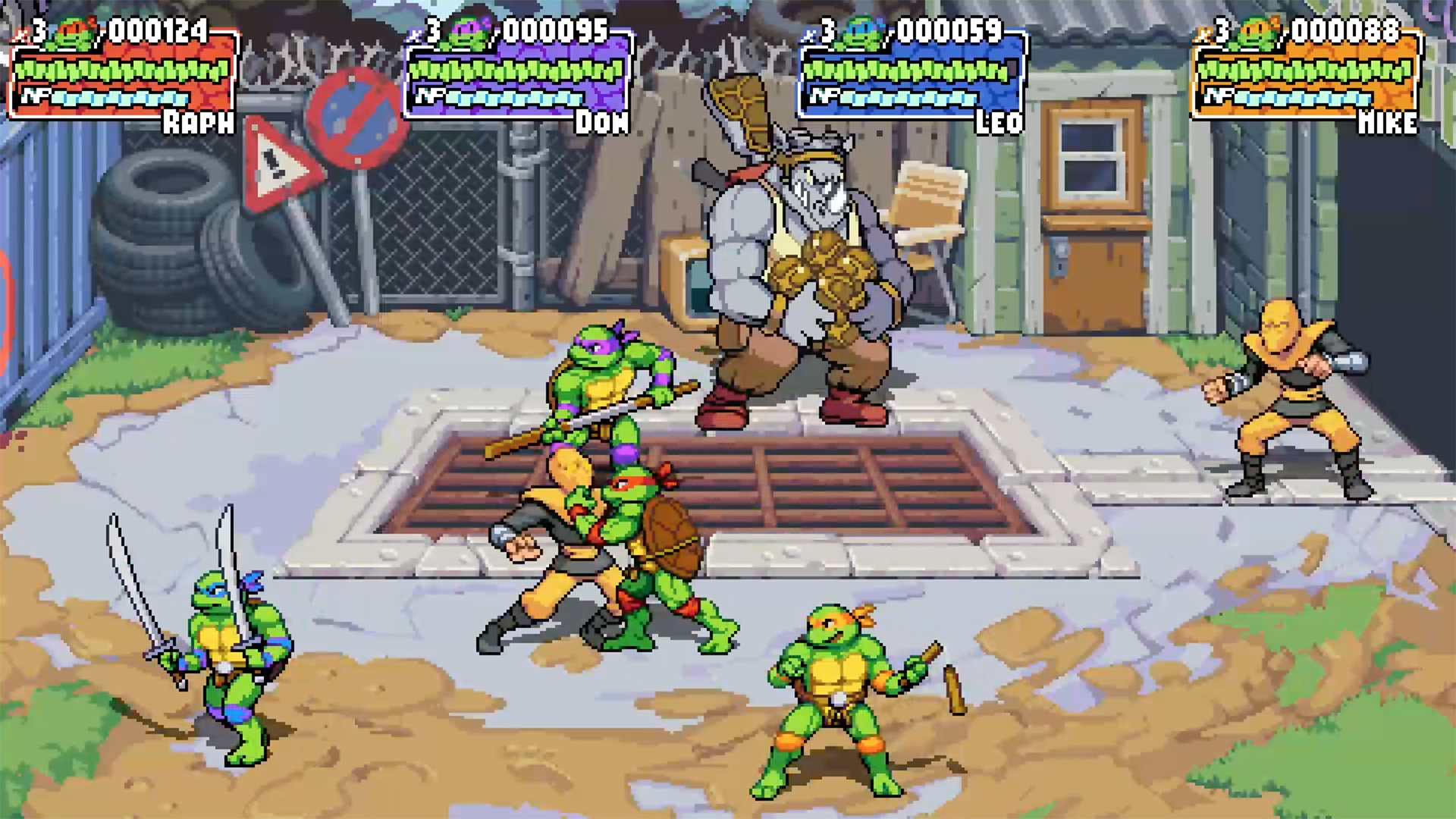 Then there is the attention to detail. Its visuals don’t just feel like something from the 80s, but somehow manages to combine them perfectly with the original cartoon. New York City, Coney Island, and even the worlds of Dimension X feel like something I saw on my TV as a child. The fact that the four original voices of the Turtles came back to reprise their roles helps to keep that nostalgic vibe going.

Control-wise, this is definitely one of the smoothest side-scrollers I’ve played in a long time. Creating combos, initiating strong attacks, and even performing a cool taunt are easy-as-shell to do. Despite the original being a button-masher of sorts, I felt no pain in my thumbs & fingers during my entire first play-through! (Although I’d be curious to replay it with a tradition arcade stick to see if that would cause some first-world problem injuries.) 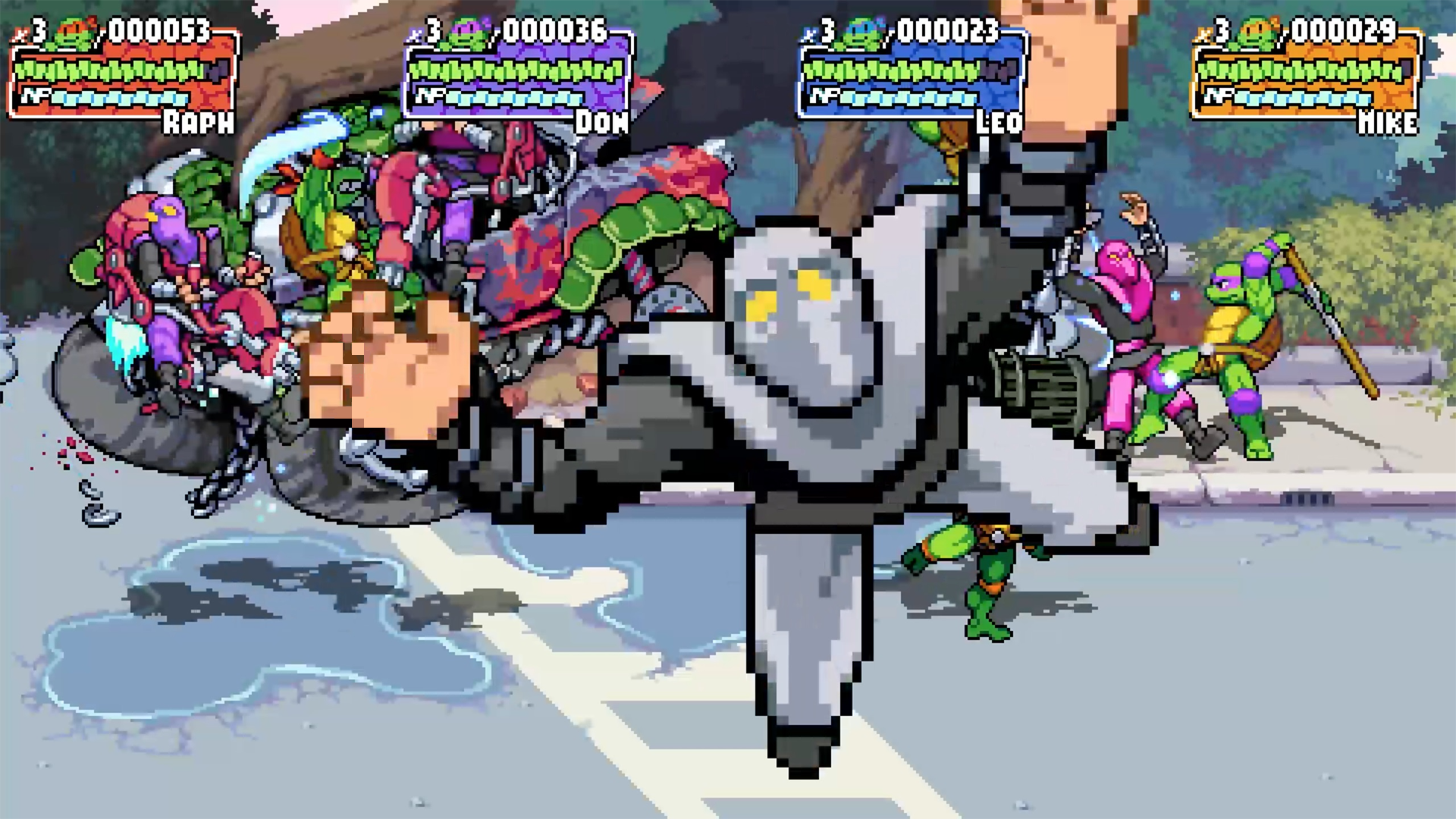 Lastly, I cannot show enough love for the soundtrack. On top of having Mr. Bungle’s Mike Patton perform the theme song (perfectly, mind you!), we’ve also got new tracks from Mega Ran (“It’s a Pizza Party”) and Wu-Tang Clan’s Ghostface Killah and Raekwon The Chef (“We Ain’t Came to Lose”)! Jonny Atma’s “Panic in the Sky!” is a true lost hair metal classic. Its overall score, composed by Sonic Mania’s Tee Lopes, stays true to the original game, with some solid nods to the cartoon.

Although Shredder’s Revenge is short, it’s meant to play through multiple times. You can try your hand at completing challenges, as well as unlock the game’s seven endings. Plus, when you beat the game the first time, there’s a certain hockey-masked anti-hero you can play as…

Shredder’s Revenge is a proper and all-around fun spiritual successor to the original Teenage Mutant Ninja Turtles arcade game. It emulates its predecessor, while improving on the original’s flaws in the best ways possible. Fans young and old of the Ninja Turtles will have a pizza party-level of enjoyment when they experience what Shredder’s Revenge throws at them. COWABUNGA!!!

Promotional consideration provided by Thomas Schulenberg of Tinsley PR. Reviewed on the PS4 and Xbox One.