HomeComics/MangaMANGA REVIEW | "Nighttime for Just Us Two" - Volume One

MANGA REVIEW | "Nighttime for Just Us Two" - Volume One 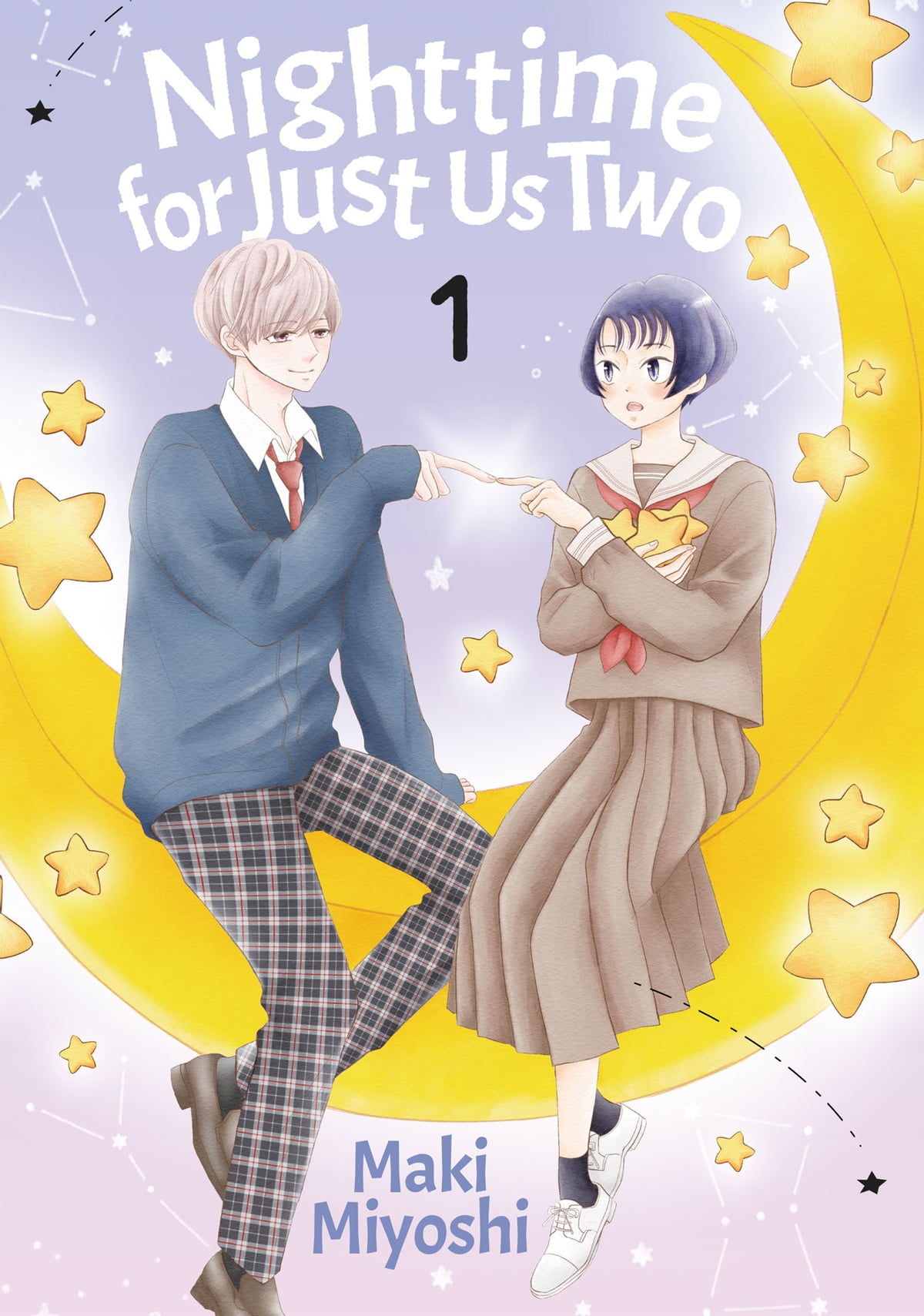 MANGA REVIEW | "Nighttime for Just Us Two" - Volume One

To the most introverted, making connections is an alien concept. Having to bond with other people, attend parties, and collaborating just doesn’t mesh well with those who prefer to be alone. So when a literal alien reaches out to be their first friend, it should send some shockwaves into your brain right? That’s what kind of happens to our main character in Maki Miyoshi’s Nighttime for Just Us Two.

Nikaido is an outsider at school, with her fellow classmates unable to get her name right. Her favorite time of day is late at night, where she can gaze at the stars alone while watching cute pet videos. One night, class heartthrob Koga appears next to Nikaido, and says something otherworldly: he’s an alien. After watching the #1 guy in school literally glow, Nikaido has no choice but to believe this weird circumstance. 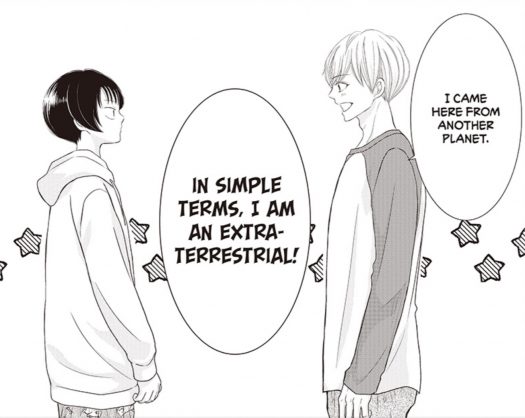 But because the alien only comes out when the actual Koga’s asleep, it makes for some awkward moments between Nikaido and him. She tries to tell Koga about the situation, but he thinks it’s crazy talk. However, when the alien makes a video recording to explain the situation, Koga has also has no choice but to believe it and Nikaido. Even if he has accepted this new aspect in his life, Koga still doesn’t quite trust this new alien, whom Nikaido has dubbed “Chiro-chan”.

One of the things that Nighttime for Just Us Two does well is develop its characters. It’s clear that Nikaido has a hard time socializing with others, and having her first friend will certainly help with giving her more confidence to speak. But such a thing doesn’t happen overnight, as Nikaido struggles to talk with others at school and a party soon after meeting Chiro-chan. Seeing Miyoshi allow Nikaido to evolve at a baby step speed is the right way to allow an introvert to grow, rather than simply change their personality with a mere snap of one’s fingers. 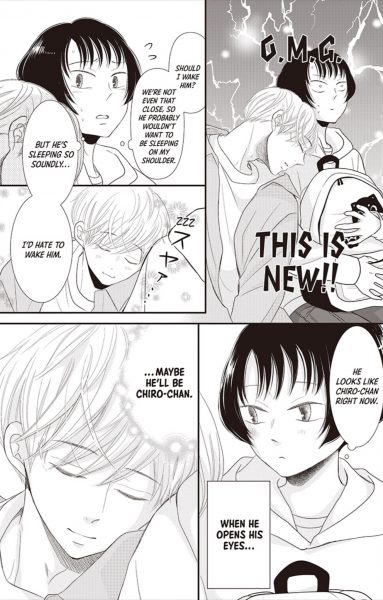 The character of Koga/Chiro also has a good yin/yang relationship with themselves. While Koga is a fairly nice guy, one can understand his frustrations of having an alien living inside of him. Chiro understands this, and while he promises to never be too much of a burden to Koga, the student still is wary about its existence. Him lashing out on Nikaido for not knowing enough to know if Chiro’s a threat or not may seem like overkill, but it’s his rough way of trying to protect his fellow classmate.

Of course, Nighttime for Just Us Two does give us plenty of awkward moments between Nikaido and Koga. Her chatting with Chiro in the men’s bathroom results in a rumor spreading about her and Koga dating. She tries to fix the misunderstanding, only to dig herself deeper and become someone whose constantly ridiculed by her classmates. Koga fortunately clears up the hubbub, but not before having to make a risky-yet-humorous sacrifice. 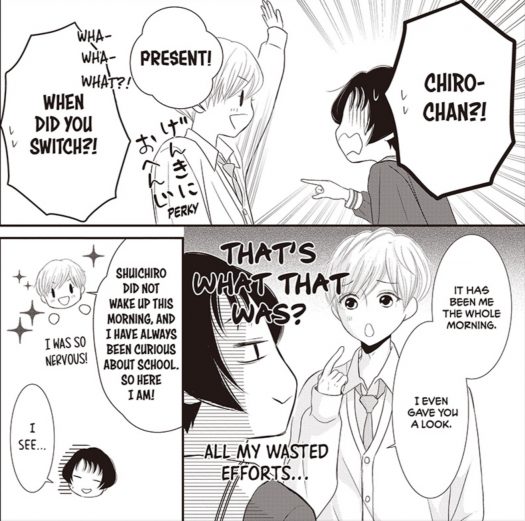 Perhaps my only complaint with this manga is its visual style. I get that Miyoshi is appealing to a certain shojo crowd, but it looks like every other manga in the genre I’ve read these last few years. It does well with being expressive and pretty, but it doesn’t reinvent the wheel when it comes to its art. Thankfully, it has a better story than most of the generic shojo series I’ve recently come across!

Nighttime for Just Us Two has a pretty solid story with likable characters and a good sense of humor. While it doesn’t do anything new from a visual perspective, Miyoshi makes up for it with its solid pacing and relatability. Sure, it might not take an alien to get an introvert out of their shell, but it certainly will require someone less out of the ordinary. With that said, Nighttime for Just Us Two is shaping to be a good friendship story that’s out of this world! 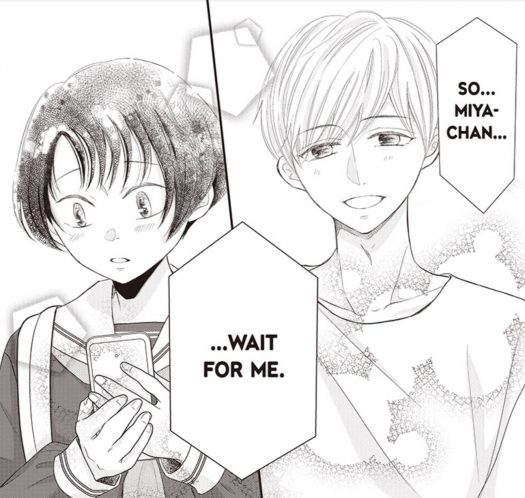