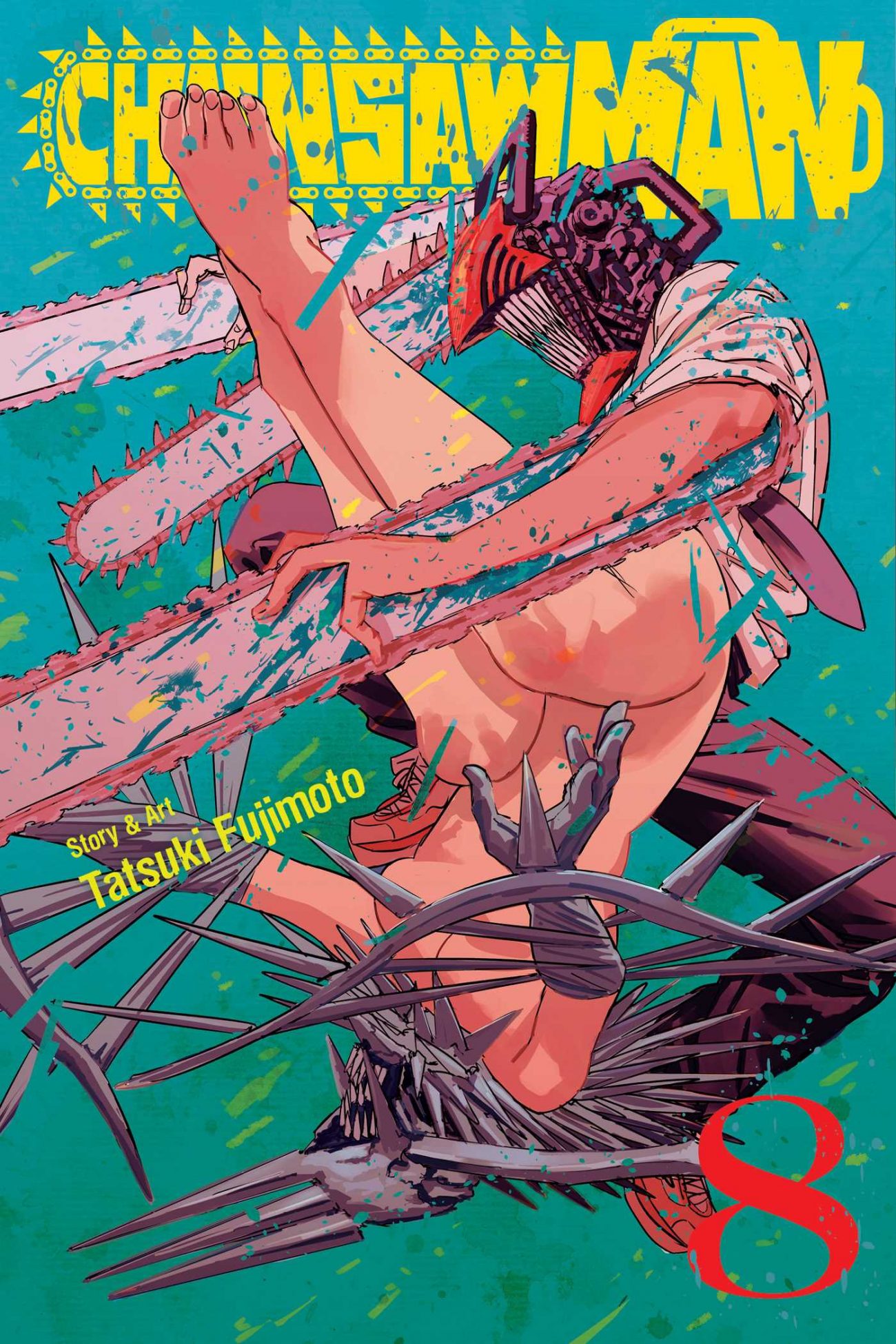 Well…that certainly wasn’t something I expected from Chainsaw Man!

Now don’t get me wrong. Tatsuki Fujimoto’s creation is — in the technical sense — bat-shit crazy! The plot, the visuals, and even the violence are showcased in such unique fashions, like a blend of a Suda51 video game and a Lloyd Kaufman film. It’d be hard to predict what Fujimoto comes up with next, it’s that random! But in Volume Eight of Chainsaw Man, there’s a new feeling I experienced that I’ve never felt in past volumes: unease.

Starting off where Volume Seven ended, Denji has become the target of multiple assassins from all over the world. The rest of Public Safety attempt to protect him, but the likes of Quanxi, The Puppeteer, and Tolka & Master have their own crazy strength. Suddenly, The Puppeteer and Master have the upper hand, as they call upon Hell Devil to drag everyone to the bad place. That’s where Public Safety come face-to-face with the most terrifying entity yet: the Darkness Devil. 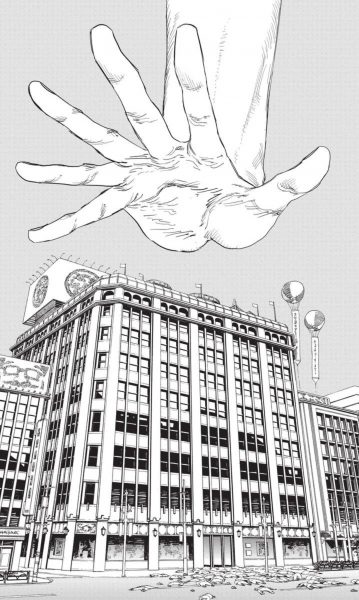 It’s in these Hell-based chapters of Chainsaw Man where that uneasy feeling comes into play. At first, Hell doesn’t seem too threatening, what with its grassy hills and flowers. But the infinite amount of doors that hang overhead give a sense of grave danger, as one of Quanxi’s girlfriends seems to realize. And then, Darkness Devil appears, and we’re greeted to the most royal of mindfucks we’ve ever seen in Fujimoto’s series!

How does one describe the imagery that readers will be greeted with? Dead praying spacemen? Floating limbs and decapitations? A lone frog? What’s it all supposed to mean? Are we supposed to find meaning in it? Or is Fujimoto playing by Lucifer’s rules and simply torturing us for the laughs? Whatever the case may be, it’s super effective and it has certainly creeped me out! 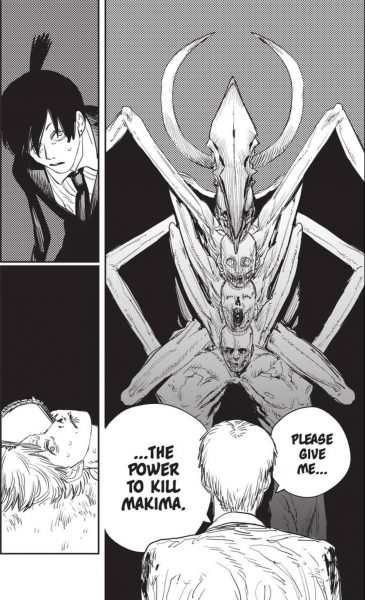 When Denji finds a way out of Hell thanks to Makima, the fever dream aspect of Fujimoto’s visuals reach full tilt boogie! There’s a memorable face-off with Denji, Quanxi, and Santa Claus, filled with blood, doll parts, fire, and even the occasional one-off joke. But it’s how the fight ends that will take any reader by surprise, with the punchline reaching a true bonkers level of insanity.

And yet, even with all of that badassery, that unease from Hell still sticks around throughout the rest of Chainsaw Man’s eighth volume. As Public Safety returns, their bodies and limbs are piled on the top of a skyscraper. Is everyone dead? Will Denji ever find a moment’s peace? Is that vacation still on? I want to ponder on these answers, but waiting for the next volume is the best option. After all, once I know everything, I’ll only think of Halloween until I die… 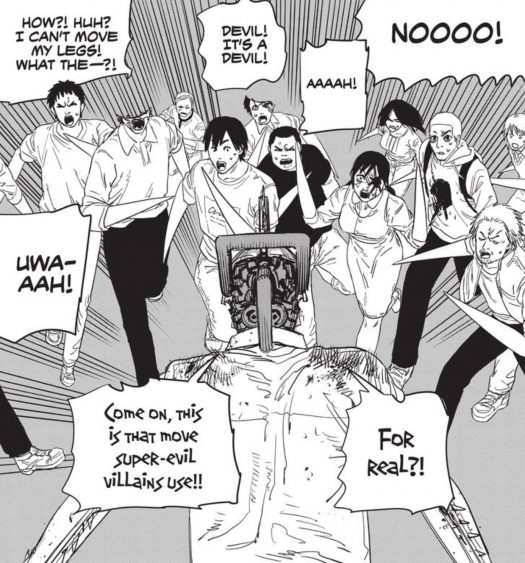 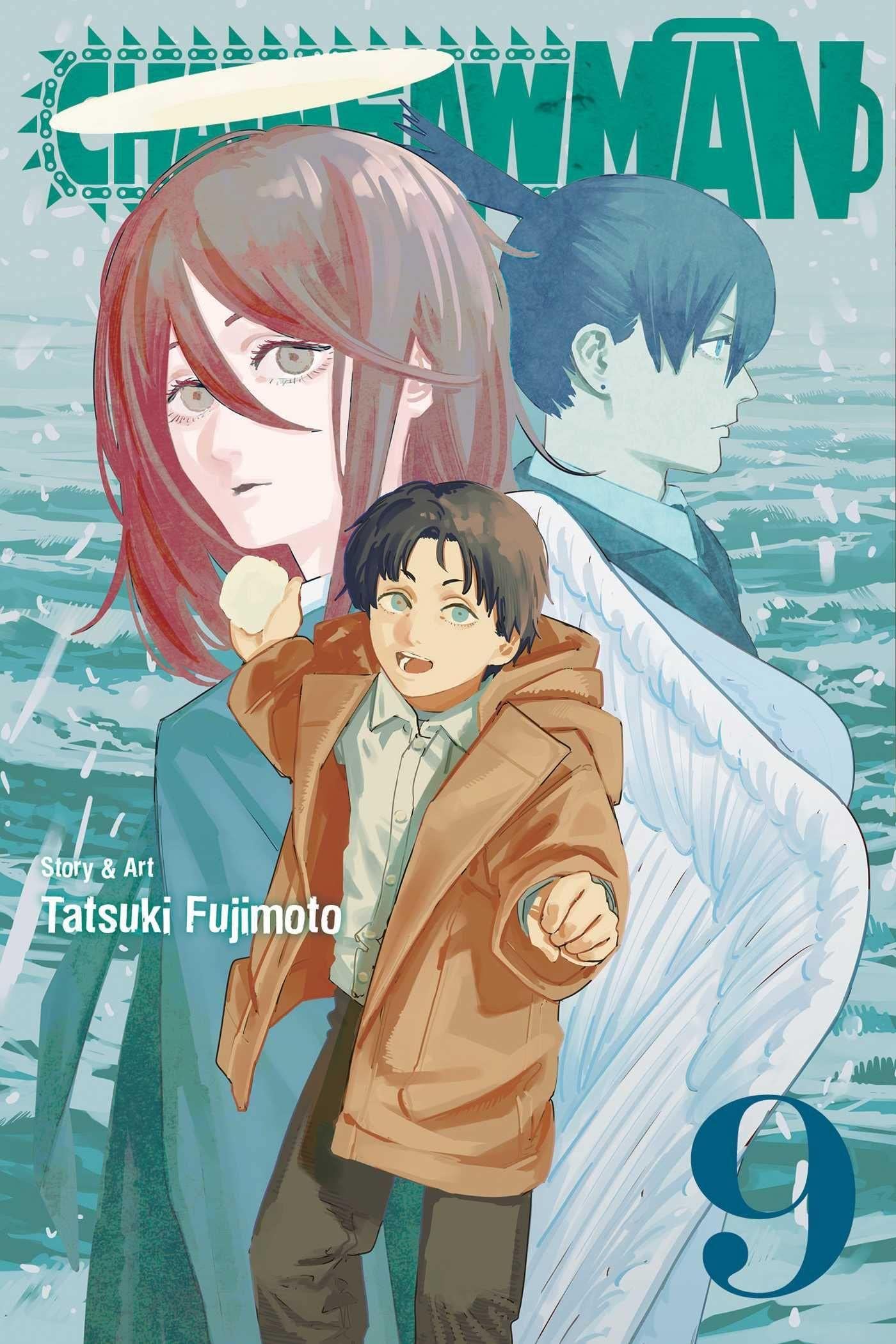 As I turned page after page of Chainsaw Man Volume Nine, an uneasy feeling took over me. It wasn’t that what I was seeing was disturbing me; it was more because things felt like they were ending too soon. Ever since the beginning, author Tatsuki Fujimoto has been building up the entrance of the Gun Devil, the main villain of the story. But now that he has arrived, I can’t help but feel a little underwhelmed.

Before we get to that, Chainsaw Man let’s Denji, Power, and Aki have a breather for once. After the events of Volume Eight, our main three protagonists are recovering from the incident. Aki’s missing an arm, Power’s got some psychological issues, and Denji’s, well, being Denji. A trip to Hokkaido to see Aki’s family grave results in a much-needed fun escapade, with all three having something of a good time together. However, as one can expect, this is all the calm before the storm. 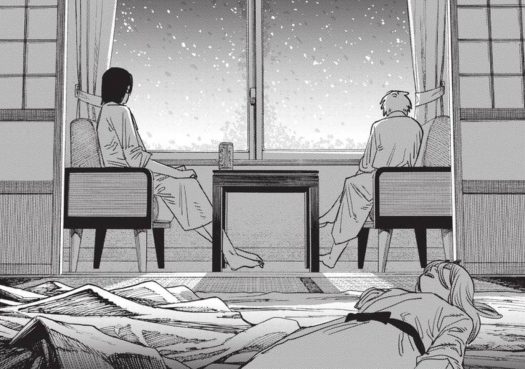 Makima lets the team know the whereabouts of the Gun Devil. Its body split up amongst various countries, it becomes apparent that the mission was seemingly hokey to begin with. The real reason for the mission is for Japan to gain control of more of Gun Devil’s body, so that it has something in its back pocket if war troubles begin. And as you can probably guess, the United States doesn’t want Makima’s plan to succeed.

That’s when Chainsaw Man lets its inner demons loose. Via the aid of the American government (of course!), the Gun Devil is let loose throughout Japan. Thousands are slaughtered, as Makima, Aki, Angel Devil, and a few others hold the line. It’s a brutal catastrophe from start-to-finish, with a body count that would make any person wince with anguish. 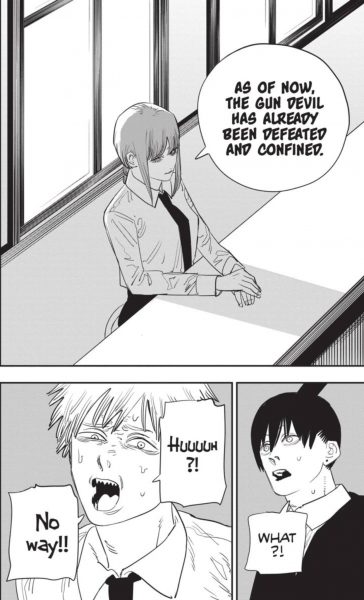 So why do I not have a single ounce of emotion going through my well-being while I read this part? Chainsaw Man has been teasing this battle for so long, and now that it’s here, it just feels so underwhelming! Is this the byproduct of rushed writing? Did Fujimoto just want to get this story over with? And what’s with the twist at the end revolved around Makima’s true being? Call me crazy, but that just felt a little shoe-horned in!

But the fight doesn’t end there. After all, this is the story of Denji, so him not being in this battle would seem rather strange. Well that does get sorted out in the last couple of chapters of this volume, as Chainsaw Man faces off against Gun Devil, who has taken control of a certain someone’s body. The face-off — which goes back-and-forth between reality and a snowball fight in Denji’s mind — is as gruesome as one can get between two opposing forces. Yet after seeing what the Gun Devil did to thousands of Japanese people, it feels so…um, it’s definitely not exciting. 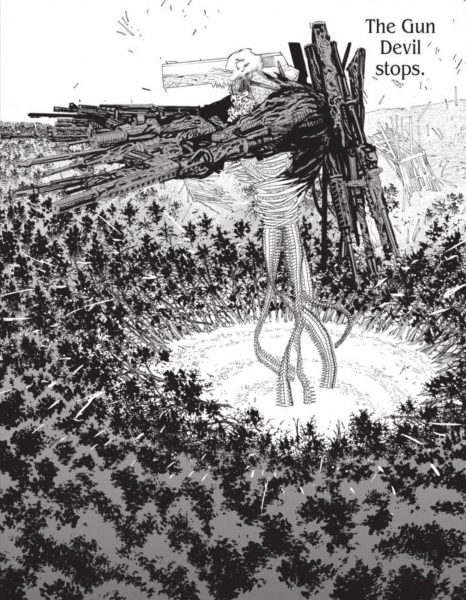 And that’s how the penultimate volume of Chainsaw Man left me feeling. The climax feels rushed, and the arrival of the big baddie was not as impactful as I imagined it could be. To be blunt, I felt bored reading this volume. For a manga called Chainsaw Man to make me feel like this, well, somebody fucked up! Let’s see if its final volumes can muster any sort of comeback, or if Denji and Power will be left without enough gas to keep the interest going.