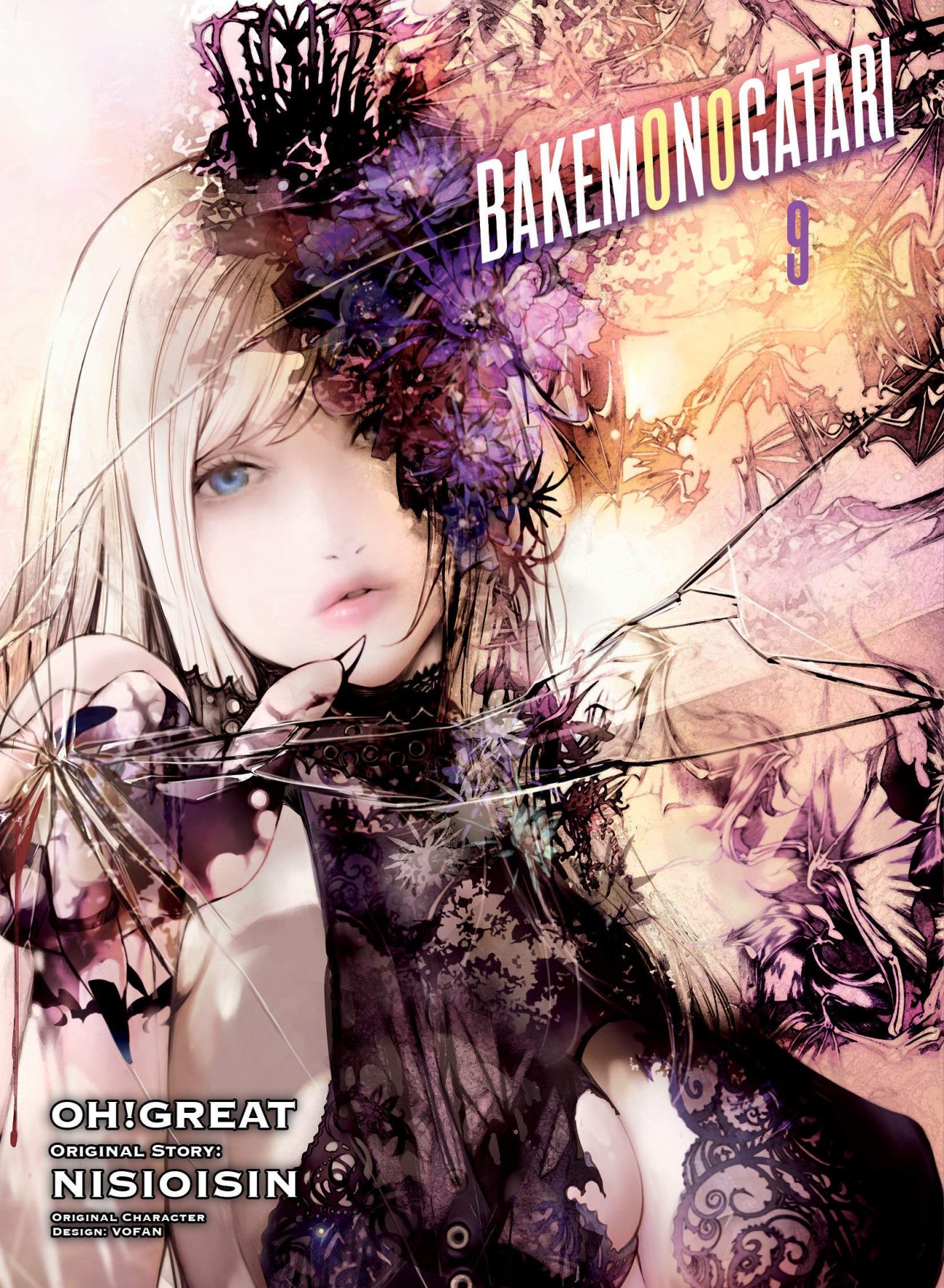 As the story of Bakemonogatari goes on, one question remains: how exactly did Koyomi find himself dealing with aberrations? After helping Hitagi, Mayoi, Suruga, and Nadeko, the past was bound to come up. At first, it would appear Tsubasa would be the key player in this origin, but that’s not the case. While she plays a role in how all this aberration stuff began, the real culprit is none other than that little vampire that resides with Oshino: Shinobu.

Of course, being a Nisioisin story, it’s not that simple. In Volume Nine of Bakemonogatari, Koyomi comes across Shinobu in her adult form, begging for her life. After being guilted enough, Koyomi offers her life to the vampire woman. When he comes to, he finds the vampire woman’s age receding to that of a ten year-old. And while we know her current name, the vampire girl reveals her true identity as Kiss-Shot Acerola-Orion Heart-Under-Blade. (Try saying that three times fast!)

Koyomi realizes quickly that he’s now a vampire, but wishes to turn back into a human. To do this, Kiss-Shot needs her true arms and legs back to get her powers to return. Her appendages are in the keep of three vampire hunters: Dramaturgy, Episode, and Guillotine Cutter. Little does Koyomi know that they’re already hot on their trail. Fortunately, Oshino shows up in the nick of time. Just one slight problem: he doesn’t appear to be in much rush to give Kiss-Shot her powers back. 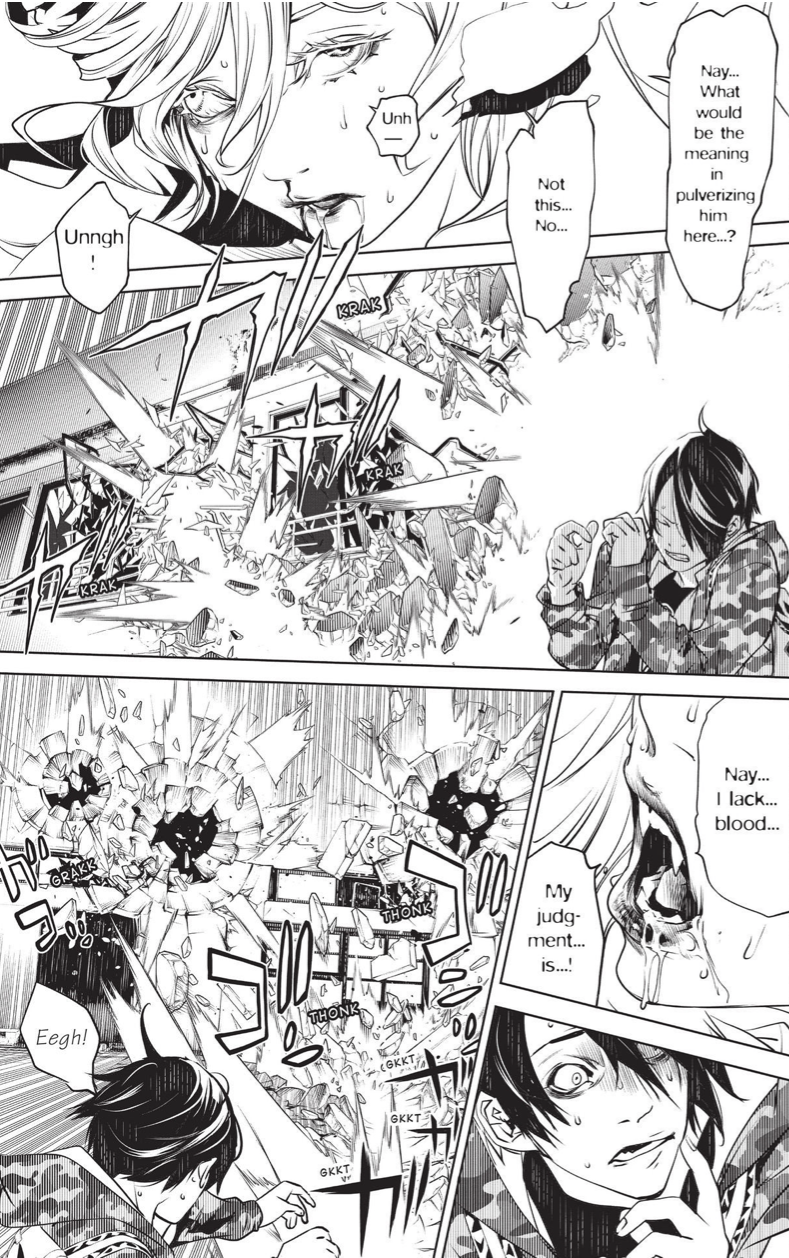 It’s interesting to see how Koyomi’s immortality came to be in this volume of Bakemonogatari. We’ve known that Shinobu played a key role into why Koyomi’s the way he is, but we see just how close their bond truly is. Although she hasn’t played a key role in the current timeline, it’s apparent that Shinobu is an important reason behind the aberrations to begin with. After all, her skills are for eliminating such curses, meaning there’s a reason why she can’t do anything about them at this time.

Even though Koyomi is the reason she’s still alive, there’s a level of ungratefulness Kiss-Shot has due to her current size. And yet, Koyomi finds a way to forgive her, because how does one stay mad at someone whose only demands (besides finding her arms & legs) are to be given head pats! The return of Tsubasa — both with Koyomi and the vampire hunters — shows what kind of role she may play in the story, be it as a savior or an executioner of judgement.

Once again, the story takes a back seat for Oh!Great’s dazzling visuals. Every frame of the battle between Koyomi and the vampire hunters is filled with earth-shattering detail! You could count every single gear and link in Guillotine Cutter’s weapon of choice, it’s drawn so beautifully! But it’s the moment when you see Koyomi step into the sunlight soon after turning where the real gruesome aspects of this story are on display, as his flesh burns in a way that’s both grotesque and intriguing. 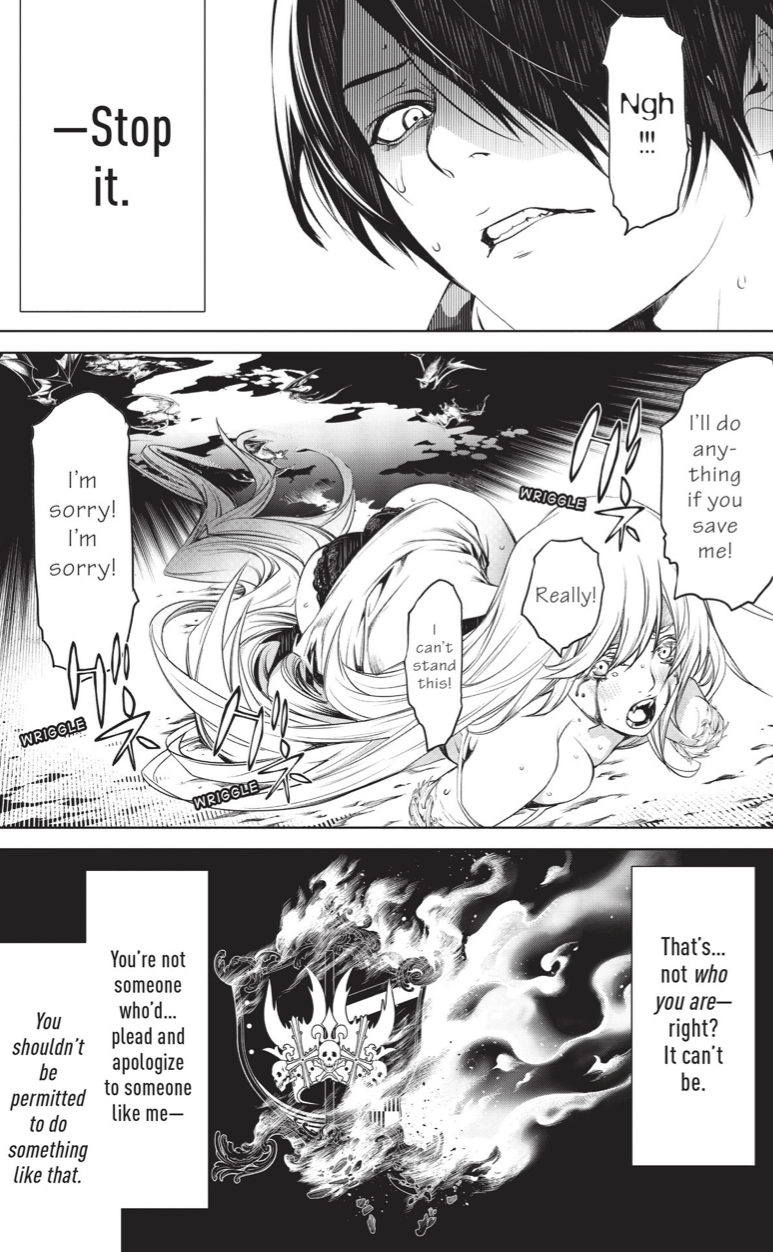 Bakemonogatari can go back-and-forth between Nisioisn being brilliant to being a complete troll. Here in its ninth volume, it’s more leaned into the former than the latter, and all for the better. Koyomi, Shinobu, and Tsubasa’s origin story has thus far been a real trip to go through, both visually and mentally. However it plans to end this arc is up in the air (unless you read the original light novels, of course), but one thing’s for certain: Koyomi’s not gonna find an easy way back to humanity. For once, I’m glad the road paved with danger is being taken here in Bakemonogatari.