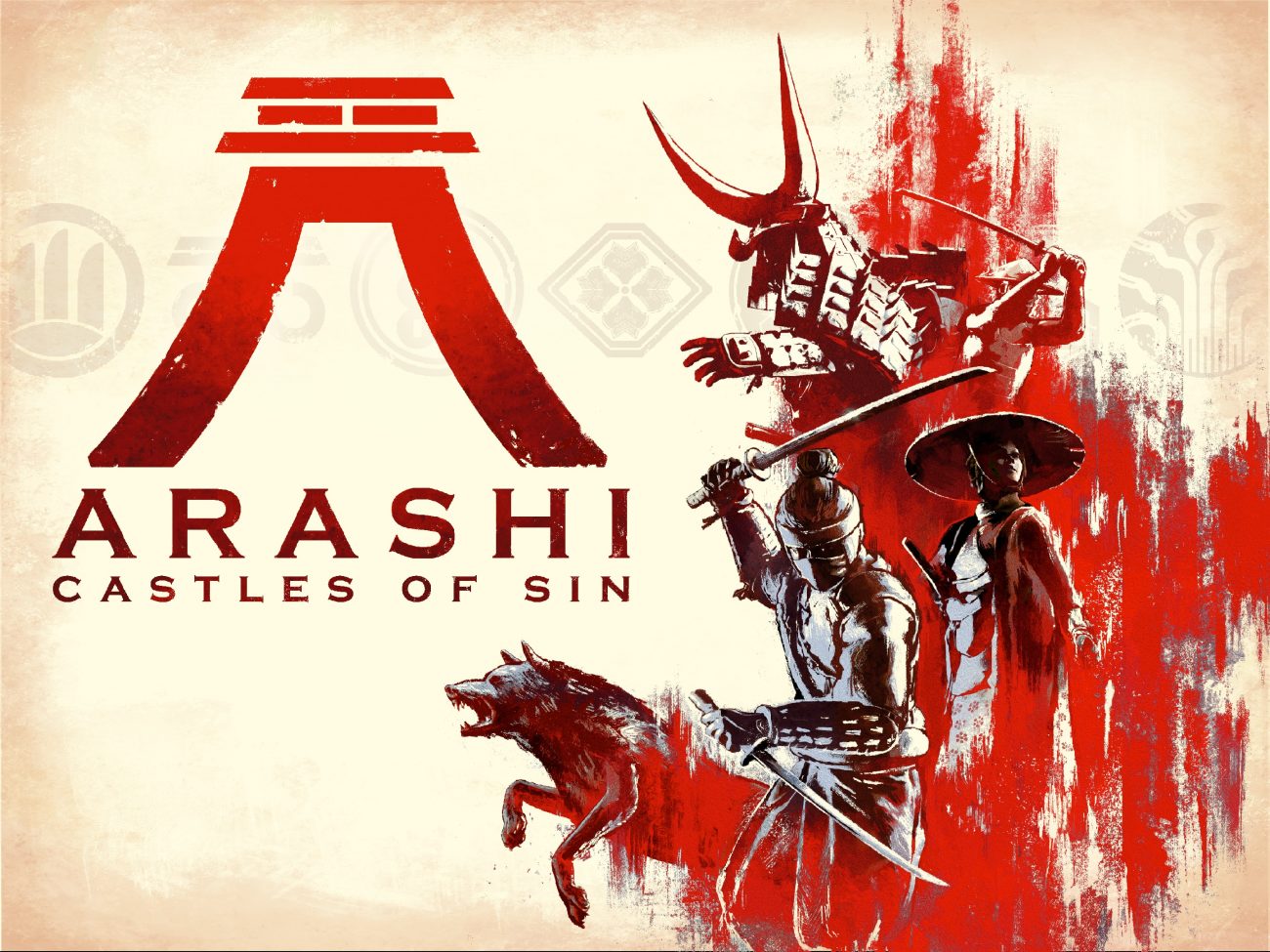 Revenge can be many things. It’s not a sweet thing, but when served cold, it makes for an impeccable dish. No genre of gaming or film showcases revenge quite like period samurai action, as the violence and emotion dance like poetry in motion. Developers Endeavor One knew such a setting would be perfect for their VR title Arashi: Castles of Sin, which captures the act of vengeance in an exciting and immersive way!

Arashi: Castles of Sin has you take on six missions to reclaim kingdoms that have been captured by the Six Oni of Iga. These are a half-dozen of the most ruthless people to roam Japan, with their monstrosity overpowering their humanity. With the aid of your wolf Haru, you set off to slay every enemy that stands in your way. And as a trained ninja, you have many skills to take on anyone or anything that reeks of evil. 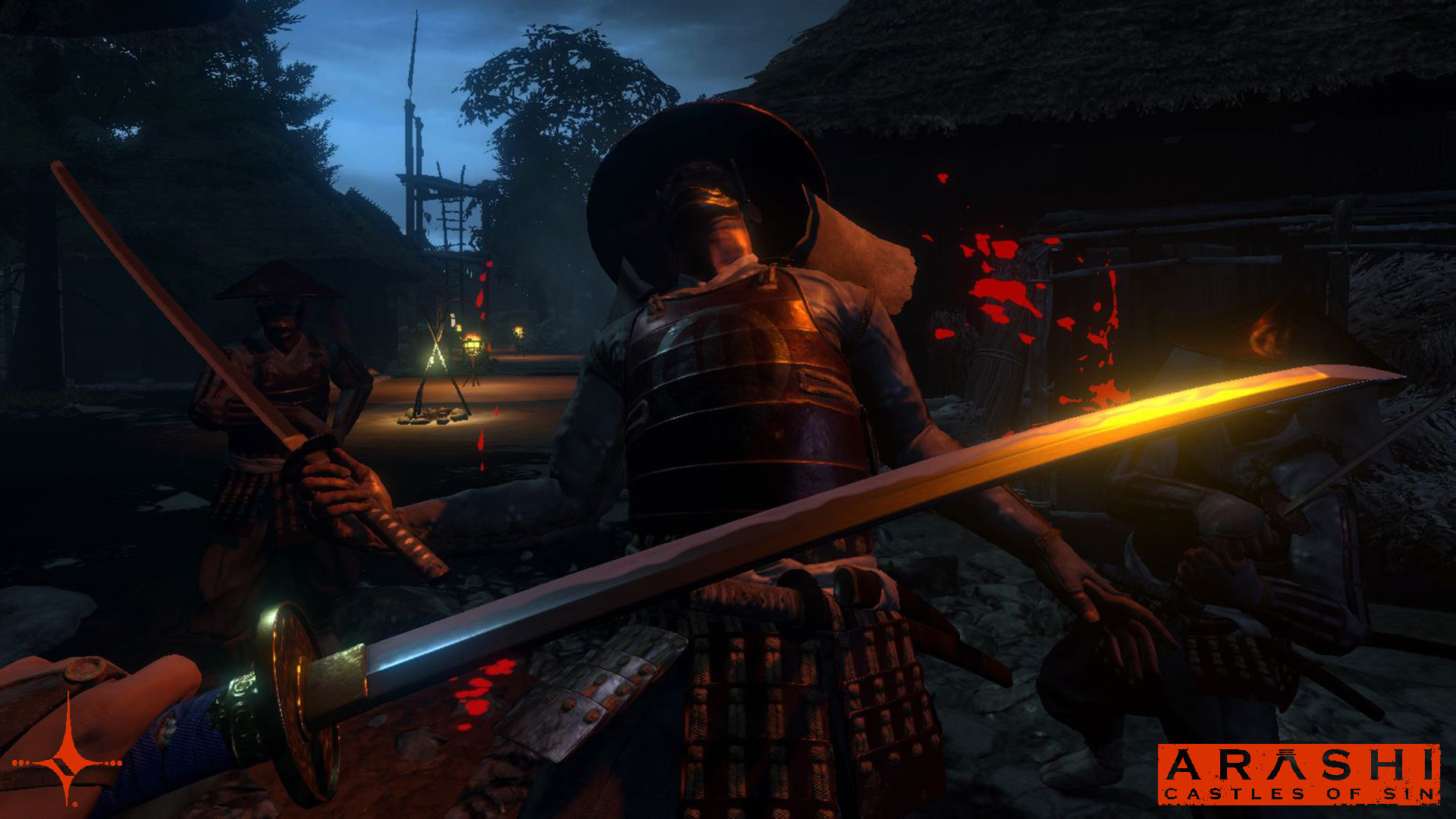 The mechanics in this game are a mixture of action and stealth. You could run in with swords swaying and arrows flying, but it could land you in a box much quicker. That’s why the act of hiding in plain sight makes for a better strategy, so that no enemy ninja or warrior will see you coming. And believe me when I tell you just how satisfying it is to get a damn good stealth kill under your belt!

You can hide in tall grass, behind walls and objects, and even sneak above with your grappling hook to get that perfect angle to take on an enemy. Then with a shuriken or bow & arrow handy, you can take aim and quietly put someone into a dirt nap. In some cases, you can just time it right to leap down and get a good slash in to really take them by surprise! These moments in Arashi: Castle of Sins will make anyone fist pump with glee as soon as they get that kill in. 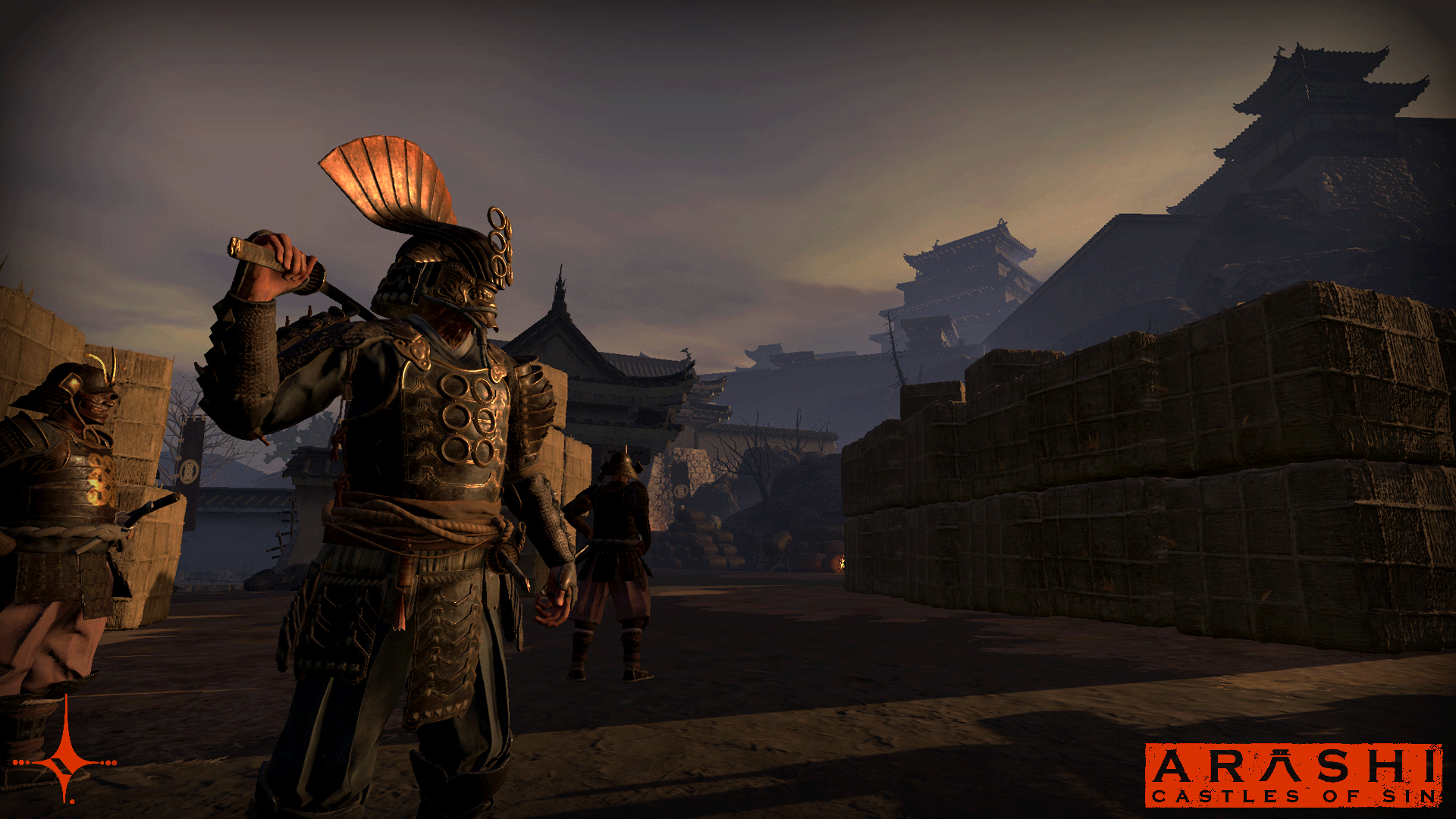 Of course, it’s not just about stealth kills. There’s also the fun of one-on-one combat, as you fling your PlayStation Move controller to wield your mighty blade. Aim right, and you’ll get that perfect blow in. But some of these enemies — especially the shogun — don’t make the kill easy, as they’ll block your attacks if you’re not fast enough. And if you don’t block your attacks quickly, well, that’ll be the end of your vengeful journey.

Said journey isn’t something you do solo, as your wolf comrade Haru assists in many ways. With the proper command, she can dig, attack, and cause a distraction all for the sake of the mission. Not only is she a big help, but her interactions can be adorable! (And yes, you can give that big fluffy woof-woof all the head pats in the world, and she’ll respond with pure happiness!) 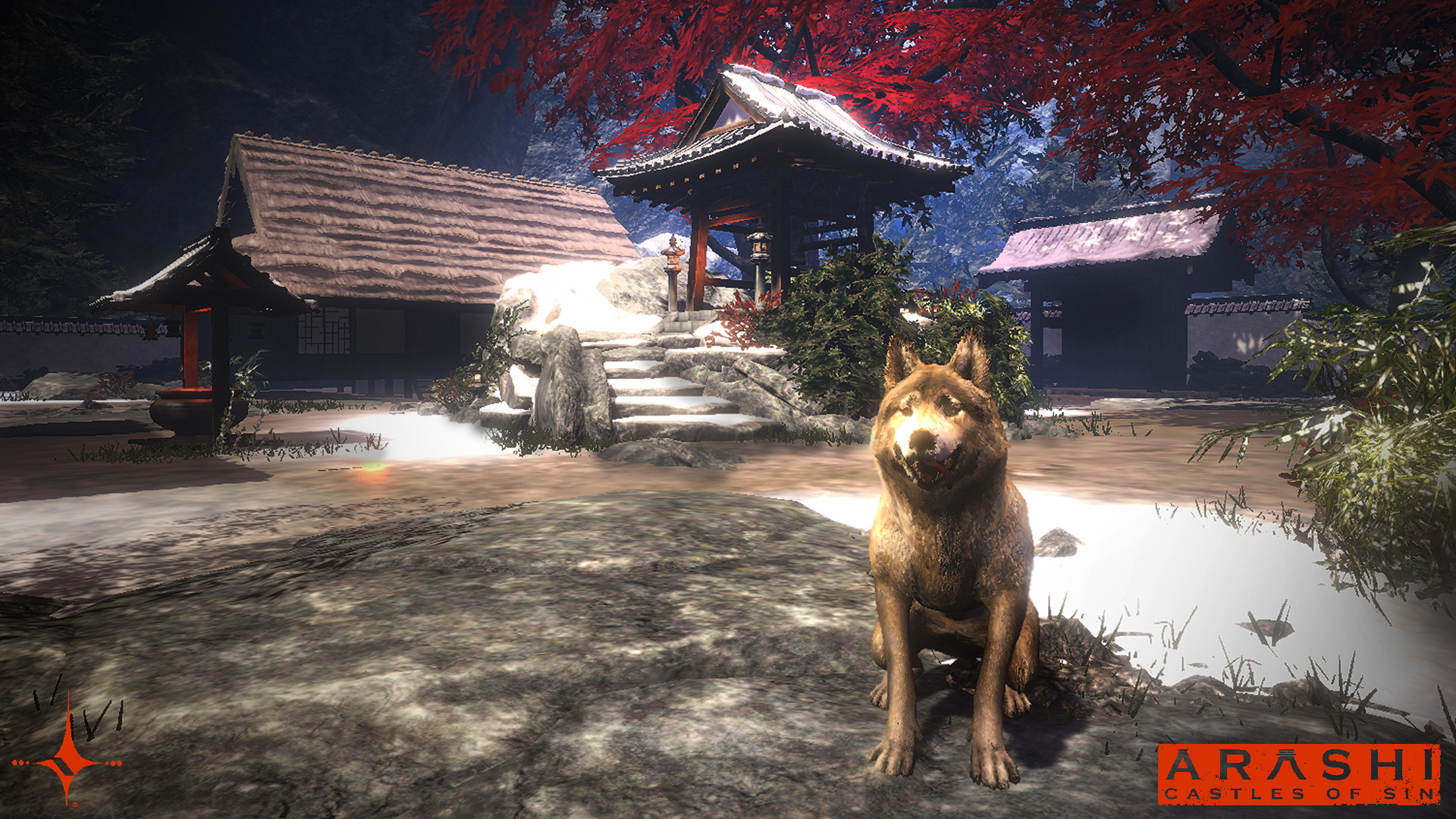 One of the best things about Arashi: Castle of Sins is its controls. Running, fighting, and flinging arrows and shuriken happens with near-perfection. Surprisingly, it’s when you have to climb when the immersion this game offers hits you big, as you feel your biceps work while grabbing onto ladders, rope, and rock with perfect fluidity. Never have I quite experienced an action game like this, as you can feel the power right in your fingertips during its 9-10 hour runtime.

This feeling also helps with the immersion you’ll feel while playing. Every moment of this journey made me appreciate the setting and beauty that was on display, especially the nature shots. Some buildings can be a little rough-looking, but it makes it up with both the people you face and the green that surrounds these kingdoms you’re infiltrating. It’s not perfect, but for a virtual reality game, it gets the job done well! 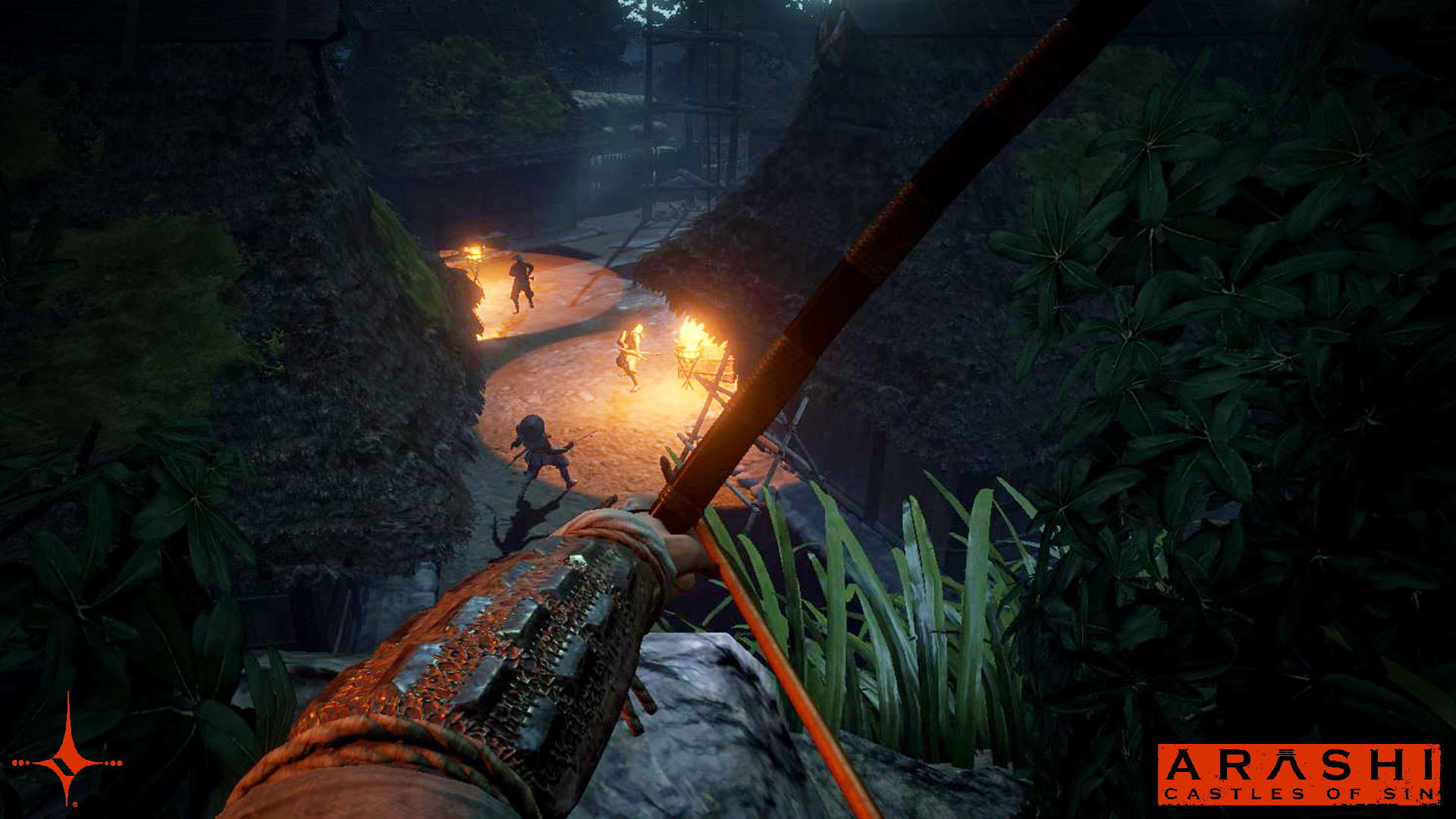 Perhaps the only complaint I have with Arashi: Castles of Sin is its difficulty. Once you figure out all of the mechanics, taking down enemies can be pretty simple. With that being said, this simplicity will give you the opportunity to test out certain kills and techniques. After all, you may just surprise yourself with a new skill that’s laid dormant all this time.