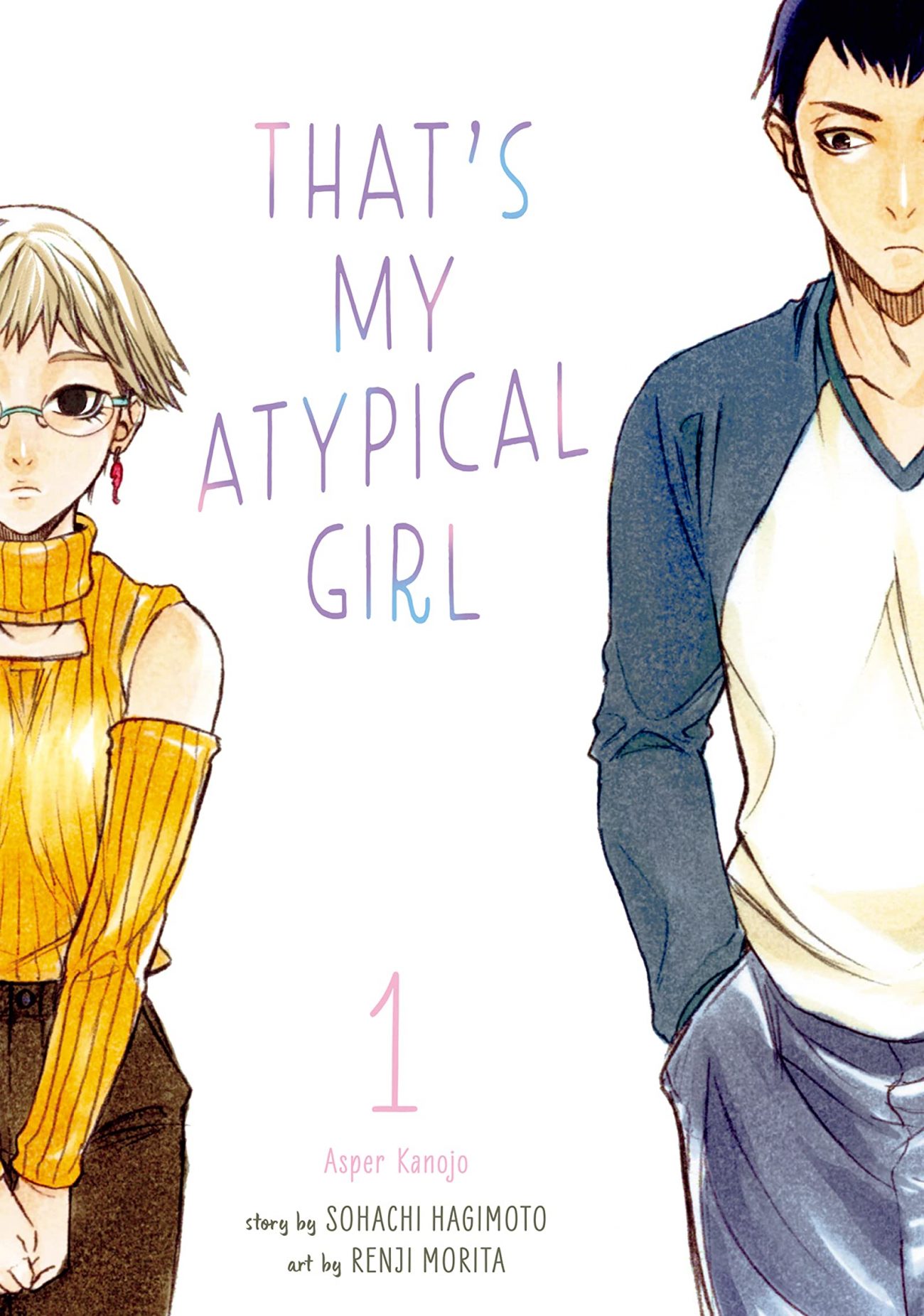 WARNING: The following manga contains references to suicide. If you or someone you know has suicidal thoughts or feelings, you are not alone, and there is free, 24/7 help. National Suicide Prevention Lifeline offers specific resources and confidential support for those in crisis or emotional distress. You can call 1-800-273-8255 or go to SuicidePreventionLifeline.org at any time for free, 24/7 help when you or anyone you know needs help.

In fandom, there’s always a connection between the writer and their reader. With that being said, there’s always a nice wall that’s placed in-between the two to make sure things don’t get awkward or, worse, stalker-y. But in some cases, there are people that somehow find a way to bond with the writer, as the two parties find themselves becoming closer and more open to one another. Sohachi Hagimoto and Renji Morita’s That’s My Atypical Girl plays with that scenario, as writer and fan bond over the content and real-life struggles. 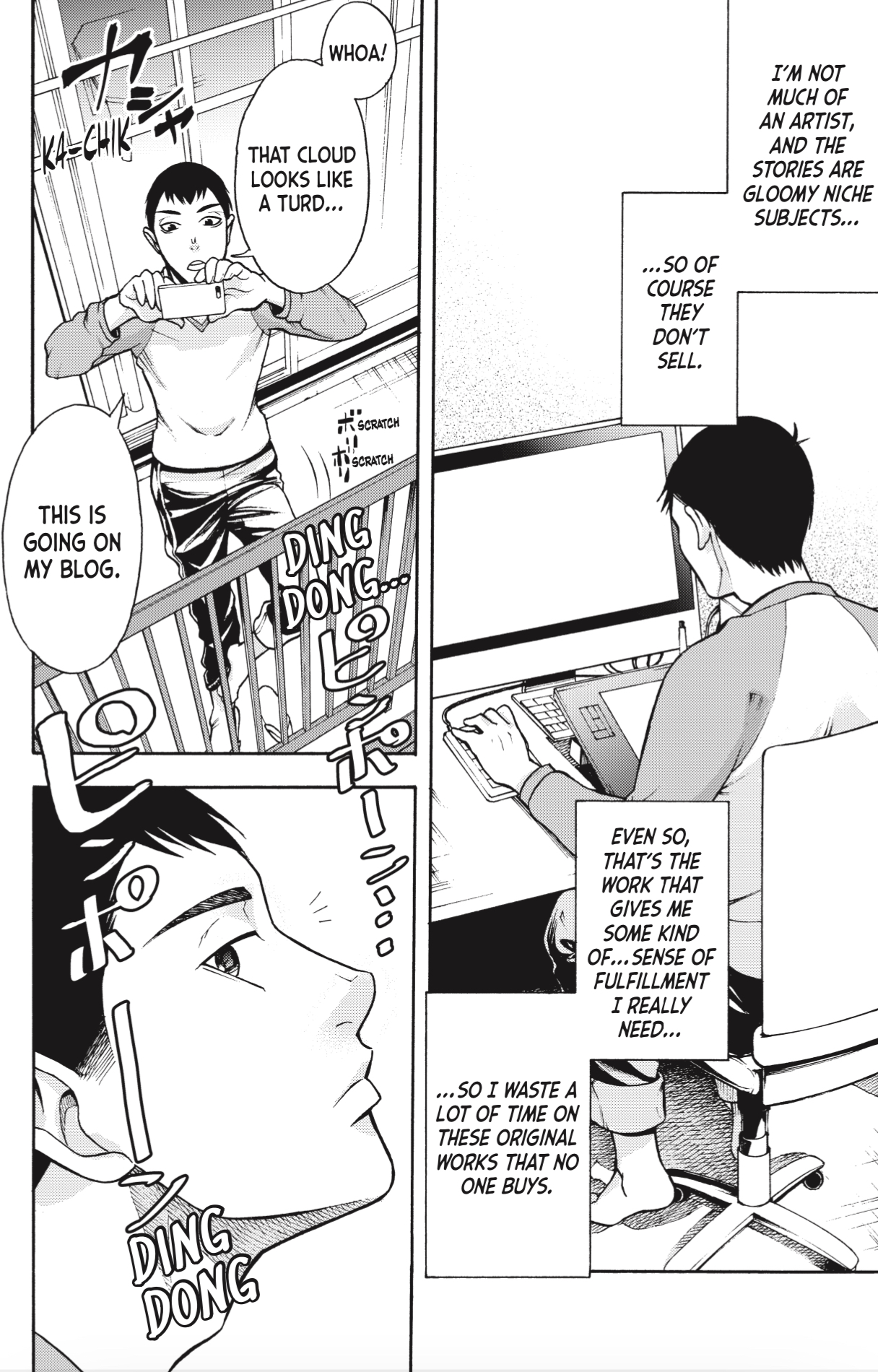 As the first volume goes on, Yokoi and Saito begin to bond over stories and their own personal struggles. Right from the get-go, you realize that Saito has a lot of heavy burdens on her shoulders. From being bullied at school to being forced into a dog cage at home, her suicidal tendencies become all the more understandable. Despite this, Yokoi aims to bring new meaning to Saito’s life, be it through his works or his actions. 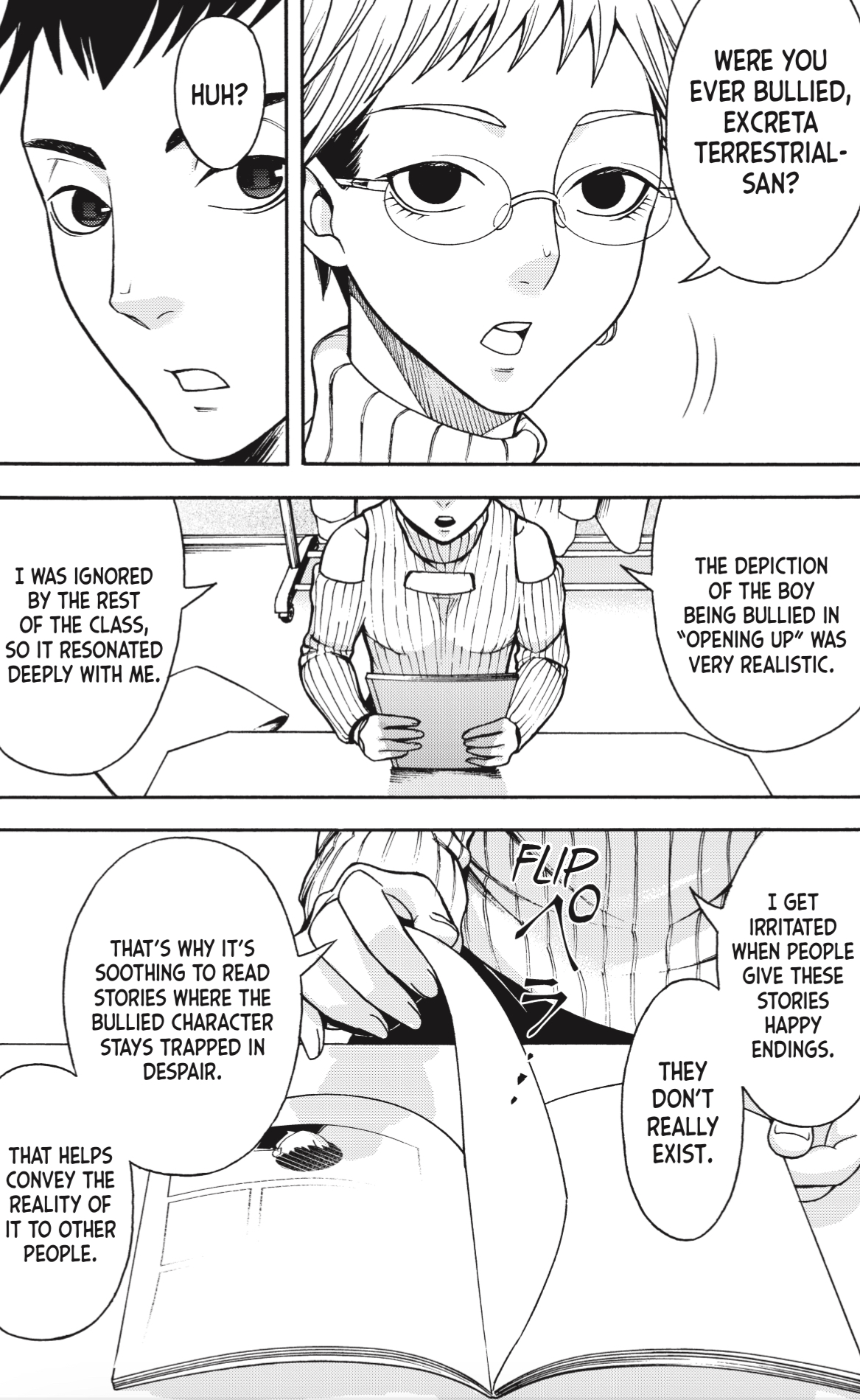 There can be some unsettling things that occur in That’s My Atypical Girl. Saito committing self-harm and her panic attacks can ring a little too true for those who have experienced or done such a thing. While Yokoi’s there’s being as supportive as possible, this scenario can sometimes be seen as fantasy to those who actually do suffer from these situations. It’s good that this manga is showing that there will be people in your corner when times are tough, but it may seem heart-wrenching if a person like that isn’t in the life of someone struggling.

How Yokoi attempts to help Saito is where the story finds that ray of sunshine behind the blackest clouds. From words of wisdom to finishing an original work much earlier for her sake, the author does everything possible to keep this woman from exiting the world far too early. It leads to some awkward conversations, as well as some surprising laughs when you least expect it. A chat about certain kinks goes from being disturbing on Saito’s part to hilarious on what turns Yokoi on. 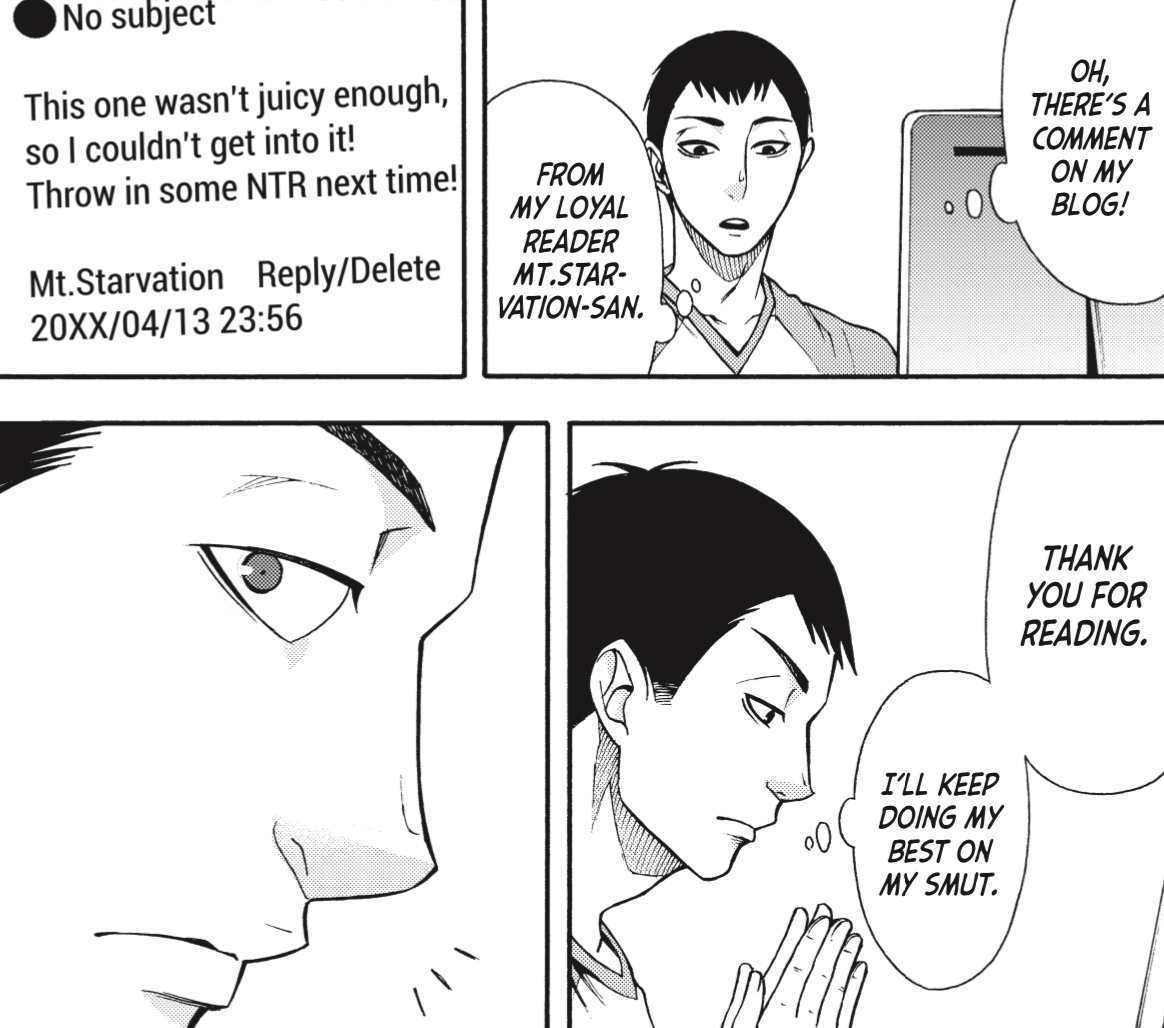 There are even some actions that occur that in That’s My Atypical Girl that manage to be both funny and relatable. An incident in a bathhouse puts Saito in hot water, even if what she does is something almost anyone would dream to see happen! The moment where the two share a futon also brings a humorous chuckle, albeit with a slice of sweetness that finds the suicidal woman in a moment of comfort. And while Saito kicking a dog getting is big fat no-no on my end, Yokoi’s reaction to it is surprisingly funny.

All of it is presented in a level of detail through Morita’s artwork. There’s some great attention placed on facial and body expressions, especially from the portrayal of Saito. During the comedic parts, there’s no need for exaggerated looks or cartoonish reactions; this is a story trying to be as down-to-earth as possible with a troubling scenario. From this perspective, the visuals match well with Hagimoto’s narrative tone. 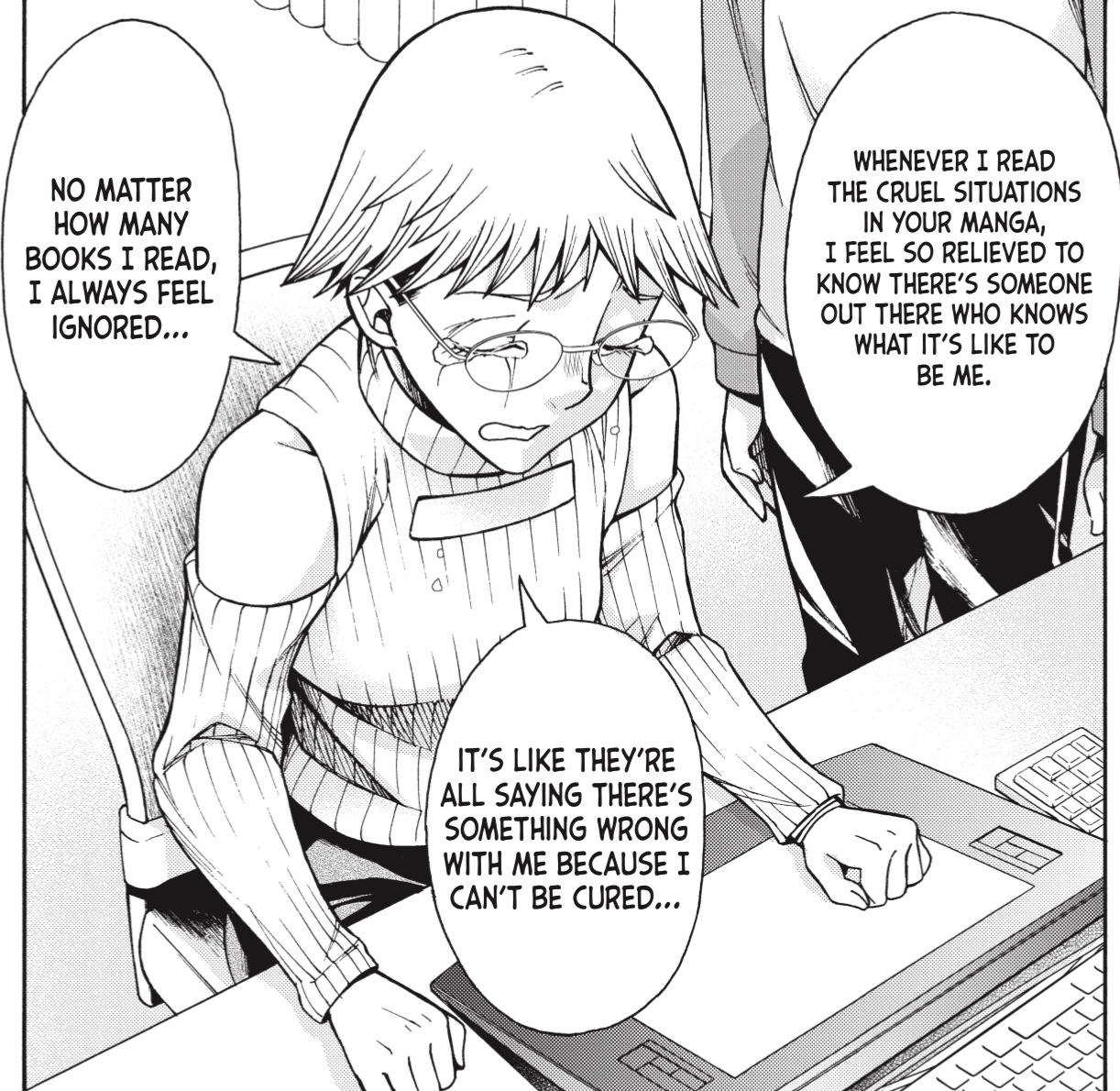 Volume One of That’s My Atypical Girl has some hardships and dark scenarios, but there’s a beacon of hope that comes alongside it. It will be interesting to see how Yokoi assists Saito on her quest to get better, be it from the works he creates or the actions he partakes. There’s plenty that can be done to strengthen the bond between the writer and fan, and what’s showcased in That’s My Atypical Girl’s first volume is certainly a hint of what’s to come. Here’s hoping that a road paved with confidence will bring some level of happiness to these two.